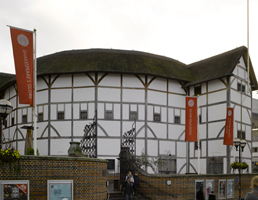 The vision of one American gave us Shakespeare's Globe Theatre. But the legacy of a limited budget on its infrastructure soon became clear. Andy Scorgie reveals how he brought FM at the theatre into the 21st century

Shakespeare's Globe Theatre stands proud on the banks of the River Thames in London, next to the vast former power stations of the Tate Modern art gallery. It's an impressive sight - the faithful reconstruction of the open-plan playhouse where Shakespeare wrote and staged some of his greatest work.
When head of facilities management Andy Scorgie arrived in 2008, the building's wattle and daub exterior gave little indication of the facilities challenges that lay within. He began a painstaking process of review and repair ?to build a stable infrastructure ?to support the vaulting ambition of the new Globe.

An extended prologue
The project to rebuild Shakespeare's Globe was initiated by the American actor, director and producer, Sam Wanamaker, after his first visit to London in 1949. Two decades later he founded the Shakespeare Globe Trust, dedicated to the reconstruction of the theatre and the creation of an education centre and permanent exhibition. The Globe finally opened its doors in 1997.

With no subsidies, grants or public money, the activities of the Globe are self-financing. And these activities are balanced in such a way that net income from the exhibition, box office and donations is enough to cover net deficits, for example, on educational and academic work.
Coming in to look after this impressive structure, Scorgie was to uncover, and inherit, a number of faults throughout the building. Despite more than 40 years' production experience, this was possibly one of his biggest challenges yet.

"On my arrival in September 2008, the site was literally tottering from one crisis to the next," says Scorgie. "Everything was in a pretty bad state, practically on the verge of falling apart.
"There is no doubt that the look of the site, particularly the 'reconstruction', is stunning, but it was hiding some terrible deficiencies.

"During construction, each time money ran out, work stopped. Things were then progressed on a basis of begging and borrowing. This in turn led to some fairly drastic corner cutting, which resulted in the 'finished' building having a poor infrastructure."

Raising the roof
Just a month into his appointment, Scorgie oversaw the six-week re-thatching of the Globe roof. Workers used 800 bundles of sedge for the process and 10,000 English hazel spars to cover the roof. A new chemical treatment was used for the thatch, a mixture of borax and boracic acid, which was sprayed on and adhered with a PVC adhesive. A specialist sprinkler system and 600 litres ?of fire retardant fluid ensure ?the thatching remains safe ?from flames.

Alongside the fire-proofing chemicals and sprinkler system, a high level of security was installed, with 24-hour surveillance and a CCTV system in the building. All the volunteer stewards are highly trained in fire evacuation procedures and routings.

No testing or inspection regimes had been instigated since the building had opened, yet with its phenomenal footfall - around 4,000 visitors a day - monitoring repairs and maintenance is of paramount importance. A fault log was put in place in November 2008 and is available via the intranet - anyone in the building can report a fault and ?the facilities team then allocate it to a relevant contractor. Queries are immediately handled and a copy sent to the person who logged the fault. This enables the team to plan and undertake replacements using more robust fittings and equipment.

"It keeps everyone in the loop", explains Scorgie. "It has proved an extremely successful method, and it builds up a history which can be referred to."

The 'chaos' uncovered by Scorgie's first assessment of the site was to continue. It was a vast challenge, but one that the former head of production at London's Royal Festival Hall was determined to surmount.

"I left my previous job with the intention of retiring and settling down to restore World War II vehicles, but when I heard about this job I couldn't help but throw my hat into the ring."

Slings and arrows
It wasn't just the roofing and fire systems that needed addressing. Toilets were clogging up and lifts failed constantly because of poor maintenance. As a result, the wiring, plumbing and heating infrastructure was swiftly re-evaluated.

The boilers in the building required immediate attention. Scorgie discovered the firm that held the maintenance and electrical contract had dosed the hot water system with a chemical corrosive to aluminium. As a result, only four out of 12 boilers were working.

The new contractors managed to clear out the system, which cost a great deal of time and money, admits Scorgie. A new, clean system is now in place and the 12 boilers have been replaced with four modular ones. The previous four working boilers have been taken off line and used as spares in the catering block.

"This process was indicative of the kind of problems we had with contractors who weren't performing because their contracts were pared to the bone," says Scorgie.

Upon his appointment Scorgie removed every single contract in the building and installed a dedicated team of in-house contractors. Scorgie believes this works far more effectively, creating both a productive relationship and a deeper dedication to the iconic building. The cleaning contract with Principle Cleaning Services was the only one to remain unchanged.
Analysing and monitoring each aspect of the site meant creating extra space and revenue. Even the catering arm was overhauled. Catering firm Compass had been running the restaurant as a tea shop which closed at 5pm. The Swan at Shakespeare's Globe took over from Compass to run the restaurant as a bar and brasserie, which opens for breakfast at 7.30am and closes at 12.30am.

Cakes and ale
The catering franchise was under pressure to produce, admits Scorgie, and the senior board were sceptical at first. But gaining internal support has seen a transformation in the restaurant, which now also caters for wedding and corporate events. The financial input covered not only the aesthetics of the restaurant, but maintenance of the plumbing and draining systems as well. With sewage and kitchen going into a wet well this created a build-up of fat, so a vent was installed and chemical dosing carried out once a week.

A purpose-built education centre was also constructed shortly after Scorgie's arrival. The Sackler Studios opened in November 2010, and will provide extra workshop space, a rehearsal room and a café, plus administrative space.

"When the Globe was designed, built and opened, there was no notion of how it was to function or how successful it would be," says Scorgie.

"As a consequence, a lot of the public areas in the building are too small, the circulation areas are problematic, and we've had to take into account how the building currently functions so we can change and alter it to cope with levels of usage."

Part of that thinking involved the creation of the first indoor Jacobean Theatre. Major construction work is expected ?to start in November 2012, ?with a view to staging the first winter season in 2013. The theatre will seat around 320 people.

Money well spent
An estimated £700,000 has been spent across the Globe building ?in the last financial year (November 2009-November 2010), with £300,000 dedicated to special projects. These include the revamping of the West Piazza, work on the Sackler Centre café, refixing of the coping stones to the catering block, boiler replacement and the installation of wheelchair refuge alarms.
In addition, Scorgie negotiated with the theatre's electrical supplier to provide an additional 400kVA for £2,500, instead of purchasing a new transformer at a cost of £100,000.
"We have spent a lot of the Globe's money over the last two and a half years but we have finally reached a level playing field,"says Scorgie.

Scorgie is confident that the budgets he and his team have constructed were a realistic reflection of the task ahead. ?"They will enable us to build on the bedrock established over the past 12 months.

"I am proud of the considerable support I am given by our chief finance officer, chief executive and the whole executive team and our trust, who have enabled me to build a world-class infrastructure for an iconic building."

How the Globe was reborn

1949 American film director Sam Wanamaker visits London for the first time. He looks for the site of the original Globe and was disappointed not to find a more lasting memorial to Shakespeare and his theatre.
1970 Sam founds what was to become the Shakespeare Globe Trust,
1987 Building work begins on site, with 6m deep foundations laid.
1993 Construction of the Globe itself begins. Sam Wanamaker dies on 18 December. At that time, 12 of the 15 bays had been erected.
1994 The plasterwork and thatching begin and are completed in 1997.
1997 Shakespeare's Globe opens its doors. Under the leadership of artistic director Dominic Dromgoole, the theatre season plays in repertory from April to October.
2010 The Globe sells more than 473,000 theatre tickets, achieving a record 91 per cent of full capacity across the season - the highest in the Globe's 13-year history.

Shakespeare's Globe Tour and Exhibition ?is open all year round and is the world's only permanent exhibition dedicated to Shakespeare's theatrical career