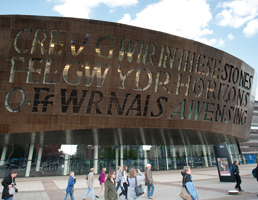 Framing a dramatic photograph of the Wales Millennium Centre is rarely a problem, as these pages testify. The building's imposing dome is visible over the rooftops as soon as you depart Cardiff Queen Street station en route to the regenerated Tiger Bay district in which it sits. And when you arrive, the now iconic inscription of two lines by Welsh poet Gwyneth Lewis, set in gigantic lettering above the main entrance, adds to the impact.

It's not just the design; the materials used in the centre's construction are equally striking. Welsh slate, in shades of purple, grey and green, flank the building on either side of a bronze-coloured steel frame. Inside, you'll find eight different types of sustainably sourced Welsh wood in the theatre and surrounding corridors. This building is Welsh in its design, construction and operation.

The centre's appeal to tourists is boosted by its proximity to the National Assembly for Wales (situated just across the road) and its appearance in some high profile BBC dramas, including Torchwood. In fact, holidaymakers comfortably outnumber those who attend scheduled events. While the centre attracts some 370,000 concert-goers each year, a further 1.1m tourists just turn up out of the blue.

In fact, tourists flock here in such numbers that the Cardiff Harbour Authority saw fit to move its Tourism Bureau into the centre - doubling its turnover in the process.

So when they walk through the doors, what do visitors see? The first impression is of entering an airport terminal, but you soon appreciate the centre's value as a cultural centre for Wales. The place is alive with visitors of all kinds. In the main reception space, schools hold dance classes watched by local residents; on the first floor, conferences take place as caterers prepare lunch for delegates; further back, the main Donald Gordon Theatre is readied for the evening's performance (the centre has been voted, by those who work in the theatre trade, as best in class). All the while, people from the centre's eight resident organisations - each serving the national arts scene - carry out their daily business. There's a constant buzz.

So, to recap: this is a 24/7 operation involving tenant organisations, a hotel, a conference centre and several performance spaces. It's Wales' most visited tourist attraction and hosts more than 80 VIP events and Royal visits per year. And did I mention that it's also home to Europe's largest youth movement, Urdd Gobaith Cymru, (the Welsh youth movement)? For the centre's FM department, there's plenty to manage.

Fused together
Fortunately, as far as FM goes this is a good news story. "I've never worked in a business where the FM team is so completely intertwined with the financial team," says deputy venue operations director, Tony Jay. "There's a shared ethos of risk management that influences everything we do."

Capital and maintenance projects are organised to ensure that the building is managed at 'exemplar' standard, an understandable objective for a building which is increasingly seen as one of Wales' national icons. "As a Welshman, working here is something I'm really proud of," says Jay.

Jay and his boss, venue operations director Jonathon Poyner, are at pains to emphasise how FM is seen as core to the centre's operations, connected to all aspects of the business and managed as 'risk mitigation'. Poyner represents the facilities team on the centre's executive, which in turn reports to the chief executive and trustees. FM is also a key component of the centre's estates committee, closely knit with the committee's strategic objectives and five-year plans.

Jay, whose previous role was at Sony's 91-acre production facility in Bridgend, is clearly enthusiastic about the management relationships he enjoys, offering special praise for financial director, Mat Milsom. "Mat talks about 'the building' like us," says Jay. "You still have to put a good case forward to get sign-off on projects, but he sees the overall life of the building in terms of how it's managed operationally, as well as the capital investment required. ?He's probably the best FM person I know." Milsom was first invited to the centre in a consultancy role, but ended up joining the centre full time.

When the centre opened in 2004, FM was outsourced to Haden (Balfour Beatty). Three years ago, the decision was made to bring it back in house. Jay joined just as the process to switch to the predominantly internal FM model was being instigated.

The catalyst for bringing FM in-house wasn't financial, says Poyner. "It was the belief that we could deliver services with a less cumbersome contractual chain. Basically, it was driven by operational dynamics - the need for more direct control and flexibility in our business."
Key members of staff were recruited from outside of the theatre industry in a deliberate policy to broaden the experience of the FM team. Jay was appointed first, with his experience of industrial FM at Sony now put to use. ("Even though some of the guys don't understand the details of 6 Sigma, 5S or KT  the managing of variants and so on  we get them to think of why that variant is there. It's the mindset we're trying to impart," he says.)

Other team members reflect this recruitment policy  Serena Grainger, stage door manager, was previously at a five star hotel; Mark Smallwood, safety & security manager, came from the NEC by way of the Royal Marines. Talking to both Grainger and Smallwood, it's notable how much responsibility is devolved to each team manager. Not only is FM visible in the centre, its practitioners are clearly empowered by senior management to get on with ?their jobs.
On Jay's watch, the FM team has delivered refurbishments of restaurants, bars and resident areas as well as routine cyclical projects such as boiler servicing. All have the aim of reducing operational risk so that the building remains open.

Upfront FM
This is a building in which the public get to see an FM team going about its job, right in front of them. I'm introduced to a cleaning operative who is out dusting in the main concourse at 11:00am. This is not his first cleaning job, but he tells me it's the one he's enjoyed most by far. Next I'm told that the man in the suit who I met at reception is in fact John, a former baker now employed on the security team. Says Poyner: "We have a policy of ensuring that our cleaners are out front during the time our customers are here. It's important to us that they meet people constantly and develop good customer skills. So, when a visitor asks a question they can answer it with 'yes, it's over there,' or 'by the way, and have you seen...'".

The staff is structured in three tiers so that it can be adapted as required. The full-time team is supplemented by a second tier of operatives employed on zero hours contracts and can be brought in to work the part-time hours required of them. A third tier of agency staff is on call to cover major events and VIP visits Poyner and Jay believe staffing at the centre can be tuned with a wider degree of control than would likely have been the case had the service been outsourced. Departmental managers control training, with staff sent on BIFM courses as part of their personal development plans. "BIFM has been very helpful in advising us on our training priorities," says Poyner.

Reducing risk
Both Poyner and Jay see the centre's risk-based approach to project funding as fundamental to the success of their FM model, even though it requires constant reappraisal of working practices. It also requires watertight information management, and high on Poyner's agenda is the production of four documents to help in both the day-to-day and long-term maintenance of the centre. These include a regular operations manual, the architect's 'design principles' and a guide to best practice conservation (influenced by visits to look at several high profile theatres across the UK).

Documenting the original design principles ensures that any refurbishment project is in keeping with the architect's original intentions. This is a goal helped considerably by chief architect Jonathan Adams, who lives locally and visits his creation regularly to discuss operational issues with Poyner and his team.

The fourth of these documents is a journal detailing a timeline for capital and maintenance projects carried out around the centre. It will contain explanations of the prevailing logic and reasons for change at the time and the subsequent advantages accrued, together with 'before and after' photos.

Jay offers a recent example: "Yesterday we trialled induction lighting for the first time and it's clear that it will give us a straightforward energy reduction in terms of kilowatt hours. However, what we're also looking at is reducing the man-hours associated with that particular piece of maintenance; we need to document how introducing this technology will do that. It's important to document the process we went through so that, in ten or twenty years time, someone can look back and see a logic trail of not only what we did, but why, and what happened as a result."
After just seven years of operation, the centre's capital maintenance plan is constantly being adapted as Jay and his team find new ways to use their budget effectively. The theatre's carpets are a case in point: Jay was able to source a new supplier and organise work to replace just the parts of the carpet that had actually worn. The unique weave meant sourcing a supplier capable of providing material designed to be in keeping with the architectural philosophy of the building.
This new information on actual carpet wear performance is now documented, and similar projects have since been conducted for chair fabric (seats at the ends of aisles were found to suffer more than those in the middle; maintenance plans were adapted accordingly).
"We're trying to smooth out our capital needs," says Poyner. "A lot of theatres shut down, take out their chairs and re-cover them. For us, the cost of any downtime is compounded by a loss in ticket sales. We run a rolling maintenance programme to make sure we never interfere with performances."

Poyner calculates that the FM team's maintenance initiatives have saved the centre £250,000 a year since 2008, a figure that would have been far greater had energy prices not rocketed over the same period. Further evidence, he says, of how successfully FM has been integrated into the centre's planning.

At the end of my tour, I ask Jay what lessons he's learnt over the last three years. "It's all about the whole life cost of the building," he shoots back. "Don't take the short term view and look at the value that your FM team can bring in managing utility cost, asset management lifecycle and the value of the building." It's refreshing to speak to an FM who's so obviously enjoying putting these frequently quoted goals into action.