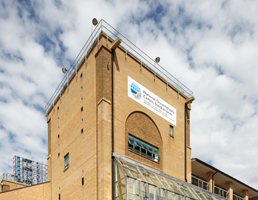 A moustachioed gentleman towers over visitors in the reception area of the National Oceanography Centre (NOC), reminding them of Britain's maritime heritage. For more than half a century, he travelled the seven seas until ?his retirement.

The 10-foot-tall effigy was the figurehead of HMS Challenger, ?a wooden, steam-assisted, screw-driven corvette built in 1858, which undertook the first global marine research expedition.

She was broken up in 1921 to be superseded by more modern and efficient vessels, including HMS Darwin, of which a model also sits in the foyer.

The figurehead and models acknowledge that the centre is about the sea, is located a stone's throw from the sea and often brings the sea indoors to many of its 135 laboratories.
But the centre is also about the environment in general. Today's emphasis on climate change - regardless of whether or not you believe it is happening - makes the centre and its work topical. ?"If we are going to talk the talk, we have to walk the walk," says Lewis Rennison, head of facilities.

Part of that "walk" is about improving the centre's energy efficiency, an ongoing project, says Rennision, a building services engineer by training. Even though the building is close to 20 years old, it's doing very well on the energy-saving front, thanks in part to a good overall design.

Behind the scenes
Although the centre's work is ?high-profile, the building is not. There is nothing ostentatious about the fittings and fixtures. Instead, says Rennison, the centre's money has gone into beefing up lab technology and improving energy efficiency, rather than ?plush carpets and stylish furniture.
As a result, the building appears less like a home for major international research and more like a college campus building. That's because the NOC is ?closely aligned to the University of Southampton.

The centre is a collaborative venture between the university's School of Ocean and Earth Science and the Natural Environment Research Council (NERC).

Of the 1,400 people on site, around 700 are graduate and postgraduate students who come and go. Many of the FM staff, including catering, security, maintenance and cleaning, ?are employees of the University of Southampton.

Ocean biochemistry is, naturally, a major focus of research at the centre. This extends into geochemistry and ecosystems, geology, and the geophysics of the seabed, while coastal processes are modelled with the aim of forecasting ocean movement and climate change.
Many labs are equipped with large holding tanks containing experiments that include brilliantly coloured coral, molluscs, strange-looking fish, threatening crabs and other creatures alien to the landlubber. The beasts are plucked from waters ranging from the nearby River Solent to the South Seas and icy polar oceans.

To fulfil these research needs as well as domestic requirements, the building must provide nine grades of water, from potable to sea and distilled water.

Rennison explains that what the building doesn't have is 'grey water' - lightly polluted waste water, from sources such as dishwashers. This isn't an oversight, but simply a matter ?of practicality. The cost of piping ?it in and circulating it is not something that would give much of a payback, even over many years. In this case, it makes more sense to put money into projects with short payback terms, ?says Rennison.

The building has stood the test of time. One of the few major refurbishments is the library, a £1m refit set to open in September. Contractor Morgan Sindall has taken what was a typical book-centric library and updated it by adding a floor, creating more conversation and break-out areas and beefing up ?IT access for students and staff.

On the waterfront
An expansive view from the enclosed glass balcony of the third-floor café takes in several adjacent docks, where every day brings different ships alongside the quays. One day it's the Queen Mary 2 and cargo ships; the next it's a couple of a huge car transporters. Ships from the NERC will sometimes tie up directly outside the building.

Level 1 is the ground floor and levels 2 and 3 are low-height mechanical and electrical distribution floors. Levels 4 and ?6 are occupied floors - labs, offices and small discussion rooms - and levels 5 and 7 are more M&E ?and plant.

At the building's four corners are the M&E towers, called nodes, and which allow access to the M&E levels without disturbing research and lecture activities. M&E contractors often come and go without staff knowing they have attended to a problem.

While the building may not be grand, the energy bills certainly were, due to the energy-intensive nature of the centre's research - experiments run 24 hours a day at full tilt. So a strategy to save energy was set out clearly in 2006 - long before many organisations were setting serious goals for energy savings, says Rennison.

The goals are stretching the centre, say Rennison, but he remains confident in reaching them. "There's no point in having easy targets. The danger, also, ?is that once you reach them, ?you become complacent."

Over the years, more than ?140 meters have been installed ?to monitor consumption of electricity, gas and water. Also, the boilers have been upgraded with energy economisers, in effect making them as efficient as ?as condensing boilers.

Only the laboratories are air-conditioned, which helps to maintain a constant temperature for experiments.

For 25 weeks of the year, seawater, which is around 8°C, is passed through heat exchangers to help cool the centre.

The building's main computer server room is cooled not with air-conditioned air at 18°C, but with fresh air at around 25°C. At first, there was some concern by IT staff about the higher temperature, but there has been no adverse effect.

But even though the scientists and researchers deal with environmental issues, they had to undergo a certain cultural change to ensure they were thinking about their own building's environment, says Rennison.

He has had to sell the idea to enable that cultural change. He was, for several years, chairman ?of the centre's environment ?sub-committee, which monitors the building's performance, and whose members are drawn from the academics, researchers, staff and students.

When dealing with such a naturally inquisitive group, explains Rennison, you have to have your facts straight - they like facts, they react to facts, about, say, consumption data, rates of use and timelines. Fortunately, Rennision acknowledges a "fascination" with all things energy-related. This, along with his building background, meant the centre was going to get to the bottom of its energy consumption. He now "lives and dies" energy efficiency, he says.
"Even seven or eight years ago, energy consumption wasn't an issue like it is today. But in the past two to three years, energy management has become a job in its own right."

Last year, the building used around 6.23 million kWh of electricity. The centre spent around £380,000 on electricity, £220,000 on gas and £50,000 on water. Savings are being made and the building's own renewable sources of energy account for around five per cent of its annual requirement. Solar heating of water is saving around 1,000 kWh annually. Pushing seawater through heat exchangers saves around 13,000 kWh a year.


A new photovoltaic system of 554 panels, costing more than £400,000, has just kicked in. It was predicted to produce 93,000 kWh. But early monitoring of performance shows it might produce around 150,000 kWh. This would significantly move forward its payback time to around six years, said Rennison.

In addition, a £1.3m upgrade of the 14-year-old building management system is expected ?to be completed next year.

But it's not all work at the centre. The building hosts many lectures and tours for school groups and the general public.

There are also three courtyards with manicured lawns, a croquet pitch, lounging chairs and bird feeders. One courtyard has its own duck pond complete with nesting pairs that decided to make the centre their summer home.

Lunches are eaten in the courtyards, which are also used for special events with marquees. Dotted around are picnic tables, many with inlaid chessboards. Some tables have painted snakes-n'-ladders boards. Apparently, ?it's not just visiting children ?who like to while away an hour ?or two, rolling the dice.