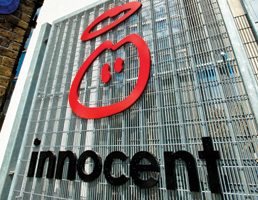 Moving home after 11 years in the same building was bound to evoke emotions among staff at Innocent Drinks. The smoothie manufacturer began business in the back room of a flat in West London. But it firmly laid down its roots in the open plan industrial unit in the Goldhawk Estate in Hammersmith for more than a decade.

Transferring this fun, quirky environment to a new building would inevitably present an enormous challenge.

Since its inception, the company has promoted the importance of creating an inspirational and healthy working environment ?for its staff.

This resulted in the Hammersmith unit space being fitted out as the company evolved and grew - artificial grass covered the floor space; staff adorned every surface with creative pictures, doodles and memories. ?It became a home from home.

But in April 2011, the facilities team, known as the environment team (e-team), undertook a project to move around 200 staff members to a light and airy office building spread across six floors in Portobello Docks, Ladbroke Grove in west London. This regenerated part of London was developed by Derwent London (also responsible for the Shoreditch Tea Building).

The site, a converted Victorian rubbish interchange on the Grand Union Canal, houses the Virgin Records building where Richard Branson made his first million. Innocent's other neighbours include British designer Tom Dixon, and Dutch designer ?Marcel Wanders has a studio ?and showroom on the estate.

The move, which happened at around Easter time this year came after the Goldhawk Estate in Hammersmith was sold by the landlords. Although the Innocent team was very happy in their then building, they saw the opportunity for growth and positive change. The e-team searched for some time to locate a new office on favourable rates. It was vital ?that new offices were situated close by to enable a swift and seamless move.

Changing places
John Durham, head of IT and environment led the move alongside project manager, Jenny Middleton - both working with estate landlord, Derwent, to retrofit the building.
"It was crucial we were able to make fundamental alterations to the building to fit in with our needs. We worked closely with Derwent to communicate our vision," explains Durham.
With a floor space of 4,000 square feet on each of the five floors, the team was faced with the challenge of replicating the collaborative space which existed, and worked effectively, in the Goldhawk estate.

"We needed to retain the Innocent principle of not sitting in teams, but mixed together. This had worked well for the last decade. In our old industrial unit space, teams were united all on one floor plate. But now we had ?to recreate this community spirit in the new office."

Retrofitting the main kitchen hub area was crucial in creating a reincarnation of the old building to instil familiarity. It was also paramount to create a space where the whole company could gather for the weekly Monday morning meeting to share ideas and update on progress. To achieve this, the environment team took the decision to sacrifice some of the first floor space in the building and remove two thirds of this floor space to create a double height space on the ground floor. This resulted in a conjoined area where staff can eat, meet and greet in a huge open plan area, overlooking the canal. This main hub has been a huge success, says environment manager, Charlie Heavey.

The artificial grass, associated with the Innocent brand, has been reinstated in the main hub, as well as across all floors. Picnic benches sit in the centre of the ground floor space for informal meetings and lunches. A large, inviting kitchen, stocked with fresh fruit, is available for all staff to use. Two cosy booths in the corner of the ground floor are flanked by a wall of staff baby photos.

A table-tennis table provides lunchtime entertainment, and, in a glass-fronted room, a team dressed in white coats carries out product development. In the Goldhawk Estate, the product development kitchen was in the heart of the office. Bringing it back into the centre of the business space was ?a key requirement. This is where all the innovation and quality testing takes place, indeed, the glass partition bears the legend, "where the magic happens", which is a pithy summary of the room's function. It is the spot where staff can test recipes and offer suggestions and feedback.

The space is undoubtedly warm and inviting with a strong sense ?of community, bringing the best ?of the old office into the new, ?says Heavey.

Environment team
With her environment team, made up of Conor, known as the 'office superman' and two receptionists, affectionately called 'office angels', Heavey was responsible for managing the move and instilling a sense of the familiar. Each member of the environment team has been allocated a floor to look after and inspect every week.

"There is no doubt it was a daunting task, she admits, but the 'Innocent touches' still remain."
A tour around the building reveals an open-plan feel. Hot desking is encouraged and teams working on the same projects tend to congregate in the same area. Innocent's founders are evenly spread across the office too - a management corner is nonexistent in this office. Bespoke desk systems made from FSC certified woodwork contain pull-out drawers that double up as desk seats to hold informal meetings.

A roof terrace provides views across London and a retreat area from the main office - an ideal spot for office summer parties.

Doors are held open during the day by magnetic locks on each floor to increase the feeling of space and introduce a welcoming atmosphere, rather than closing offices off into separate areas.

Creatures of habit
"It was a great opportunity to break any bad habits from the last office - and so we were strict on reducing clutter," says Heavey.

"This involved auctioning off old belongings but bringing some of the old touches, like the red telephone box onto the first floor."

Five years with Innocent has kept Heavey well versed on the brand's vision and how to reflect this throughout the office. With a deep respect for the importance of good design - she is a former art consultant - she has begun reinventing elements at the new office to introduce a more formalised approach, and has produced an office manual to document the process.
Contracts have been renegotiated since the move and a new relationship established with M&E contractor, Edmunds Services Limited.

Facilities on each floor have been minimised with just a simple tea/coffee making station, which draws focus to the large communal kitchen space on the ground floor - encouraging people to ?leave their desks and increase circulation throughout the building. Even toilets have become informative spaces with blackboards - an unlikely, but innovative, space for people to share thoughts and ideas.

Striking the work-life balance meant ensuring the new office incorporated a first floor gym and changing rooms with showers. Cycling to work is encouraged and easy bike parking is ensured with around 65 spaces across the shared estate.

Cool runnings
The team modified the base build displaced-air cooling system in favour of a new 'mixed-mode' model. It seemed a simple but effective concept to save energy, explains Durham.

"When the temperature of the outside air is nearer what we want inside, a green light surrounded by the words 'fresh air time' illuminates on each floor letting people know that they can open the windows, enjoy the fresh air and save energy in the process.
"When the light comes on, ?the chiller on the roof is turned off with only the air handling units remaining on to draw fresh air from outside through the opened windows and round ?the building.
"We are hoping to see a material saving in our energy consumption and costs as a result of the change."

The building is a BREEAM 'good' building, and maintaining green credentials saw the team successfully hit a 99 per cent recycle rate for the strip out and fit-out works.

Dual circuits are fitted on each floor - one to look after the computers and the other to power all the lamps, monitors and phone chargers; this latter circuit can be powered down each night. A 'last leaver pulls lever' switch on the wall cuts all non-essential power overnight.

Part of forming new habits across the workplace resulted in a new recycling programme for all office waste, including composting and soft plastic recycling. Fob based printing (swipe security fob to start printing) avoids wasted paper - a predicted reduction of 30,000 pages per year - and the team hopes to reduce printing costs by 30 per cent.

The FM team works hard to support workers, making themselves approachable. "The office represents who we are - open and transparent. There is definitely a 'work hard, play hard' mantra that is both professional and focused. Creating an innovative space can support this work ethic."