In 2011, Chris Stoddart was awarded the status of Facilities Manager of the Year. Chris sadly passed away in 2014, but in May 2016 The Stoddart Review was named in his honour. Below is the text of our original article following his FM of the Year win.

Understandably, Chris Stoddart's job of general manager for the Heron Tower - currently the tallest building in the City of London and the most recently completed of the capital's iconic new landmark locations - is all encompassing.


On my visit, he is enmeshed in preparations to receive 700 luminaries at a conference put on by the Milken Institute; he's on the phone to Lisa Ronson, commercial director of Heron Tower's owners Heron International and daughter of property tycoon Gerald Ronson; and he's talking to Skanska staff about their ongoing programme to eliminate the building's remaining snagging issues. Obviously, it's all go.

So, who is this man? To his boss, Cushman & Wakefield's Polly Plunket, Chris Stoddart is someone with "a unique insight into the lifecyle of property and the impacts of real estate on an occupier's business." To the contractors he works with, he's variously "totally supportive" and "a lynchpin." And to his peers, he's someone who "always tackles issues with a positive attitude." One thing's for sure - from the eruption of joy on the Cushman & Wakefield tables, Stoddart is a very popular choice as facilities manager of the year. 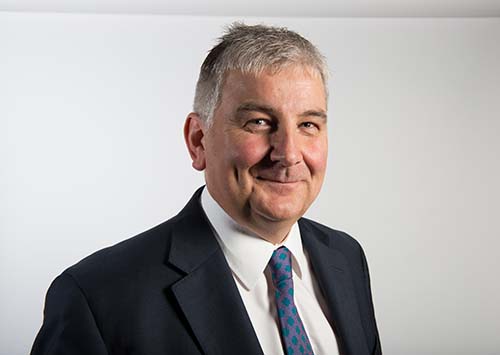 Career history
With an OND Building qualification, Stoddart started his career in construction, taking on a five-year management training programme with Bovis. Initially a quantity surveyor, Stoddart moved swiftly into project management and was soon involved in the delivery of several new-build Marks & Spencer stores across the country. Despite his subsequent move into facilities management, this early background in construction - including a stint at Mansell's - continues to serve Stoddart well today, most recently in the mobilisation, operation and management of Heron Tower.

In the early 1990s, Stoddart made his leap from the recession-hit construction sector into facilities management. He joined Dudley Bower FM as an area manager, putting his Marks & Spencer contacts to good use in managing the retailer's first outsourced FM contract. Promoted swiftly, Stoddart was soon responsible for the delivery of FM to 50 M&S stores and became project lead when Dudley Bower took on FM provision for Superdrug's 704-store portfolio.
However, it was a move to Citigroup that saw Stoddart's career in FM really begin to flourish. Highlights of 10 eventful years with the financial conglomerate include organising the cost control and reporting at the 55,742 square metre (600,000 square feet) 33 Canada Square in Canary Wharf, unifying two property management teams following the Citibank and Travellers Group merger in 2000, and accommodating displaced American colleagues when the New York Citigroup building collapsed in the 9/11 attacks.

It was when working with Citigroup that Stoddart first came into contact with his current employers, Cushman & Wakefield. At the time of the the Citibank/Travellers Group merger, Stoddart was tasked with the mobilisation of 25 Canada Square, a 42 storey building of no less than 111,484 square metres (1,200,000 square feet) of office space. When the merged Citigroup's space projections proved over-ambitious, Stoddart, with colleague Chris Kiernan, had the difficult task of finding tenants for the vacant space, working with Cushman & Wakefield to achieve it.

It's also at this point that Stoddart developed the modular approach to FM provision that has served him so well since. His idea was to offer tenants a comprehensive menu of FM services to tenants, enabled by an efficient back-office administration. Tenants choose from a comprehensive 'menu' ranging from total FM to single source procurement, project management for fit-outs and, being Citigroup, preferential rates on financial solutions to pay for it. This was a key element in the success of letting out the space at 25 Canada Square. "My aim was to ensure that any barriers to entry for potential new tenants to the building were as low as possible," says Stoddart.

The rest of Citigroup's property portfolio also lent itself to the development of the menu approach. Different sites required different approaches, ranging from basic, cost-first options to high-end sites with their need for corporate hospitality. FM needed to be tailored to the requirements of each Citigroup business group, with the FM requirements of the trading floors entirely different to those of the data centres.

The Heron Tower
After a brief period at Cyril Sweett to develop that company's FM offering, Stoddart took the role of general manager at the 36-storey Heron Tower, just 14 months prior to the building's mobilisation. He readily concedes that this position represents his career highpoint to date and lets slip that he was alerted to the job through his wife's boss (she works for the Crown Estate).
A key attraction of the job was the breadth of the Heron Plaza project. The Heron Tower represents just 50 per cent of the project, with the second phase of the development, including a new Four Seasons hotel, set to open in late 2014.

Property tycoon Gerald Ronson heads the Heron International operation, owner of the Heron Plaza complex. Ronson's vision is for a hotel ethos to pervade all aspects of the Heron Plaza operation, with visitors and tenants alike treating the buildings more like an international hotel than an office complex. "Heron Tower is deeply personal to Gerald Ronson, and has become deeply personal to me," says Stoddart, who is in wholehearted agreement with Ronson's 'high quality hotel' ethos. This has involved offering tenants a refinement on the 'suite of FM services' developed at Citigroup. This, however, is just a part of Stoddart's plan to position the Heron Tower as a 'six star' office location. "It's important to me that we operate a hotel mentality, rather than simply providing plain-old 'FM as a commodity'," he says. "It's why we have a professional doorman [recruited from Selfridges'], and why our receptionists are of the highest possible calibre [sourced through managed reception services operator Office Concierge]."

Stoddart's philosophy is that staff from different service providers work best when they're seen as part of the overall corporate identity. To that effect he operates a 'debranding' policy, with contractors' identities treated as secondary to that of the building. "We don't have uniforms for Norlands, Schindlers, or the other members of our team," he says. "Our service provder's staff wear Heron Tower uniforms (except Stoddart himself, whose suit is "strictly M&S"), and we even share the same email domain."

Stoddart is the driver of this debranded approach, and it's clear that he's particularly keen to get away from 'silo' working, where each group of contractors' staff go about doing their own thing. "It's about having a sense of fraternity for the people who work here and for that same sense of fraternity to be clear to the tenants who interact with them. Most tenants think I'm employed by Heron, and that's fine by me."

As well as his relationship with Andrew Burnie, head of asset management at Heron, ("immensely likeable for his driven, practical direction") part of the attraction of the job was Gerald Ronson's willingness to listen to Stoddart's advice. "He told me early on that 'I didn't hire you for you to keep your mouth shut. I'm paying you for your advice.' And he's been true to that; I now see him every other week."

Regular access to the man at the top has been a big help and Stoddart is quick to praise the Heron board in general. In the main, Stoddart has been able to influence decisions, particularly contractor selection. "I was able to convince Heron of the need to have specialist contractors like Norland on board," he says.

Out of hours
Stoddart has quite a reputation for 'giving back' to the profession. A member of the BIFM since 1994, he's an active member of its Fellows Forum and Women in FM special interest groups. It's not without reason that Liz Kentish, one of the industry's most prominent training consultants, calls Stoddart a BIFM 'super volunteer', as his role as founding committee member of the Women in FM group testifies. Why Women in FM? "Because of that group's focus on personal development rather than technical knowledge," says Stoddart. "It's good to work with a group that offers a fresh perspective."

A Fellow of the BIFM since 2003, Stoddart has subsequently risen to become chair of the influential Fellows Forum, which in turn gives him a seat on the BIFM members' council. Under his chairmanship, the forum is soon to be relaunched with the aim of offering more mentoring for BIFM members and to help support and develop some of the BIFM's smaller regional groups.
You can tell that Stoddart is as enthusiastic about this project as he is of the numerous tasks he has to deal with back at the Heron Tower. "Giving back is vitally important," he enthuses. "I'm not the youngest anymore and I believe we need to reach out to the young people coming in to the industry."

And Stoddart is hugely enthusiastic about the future role of FM in the property mix. "I fully intend to continue to stretch myself professionally," he says, "and I firmly believe that the over-arching responsibilities that facilities managers have make them ideally placed to lead the property professionals team."

Away from the stack plans and contract negotiations of daily FM life, Stoddart's recreational passion is motorsport. He's a post chief at events such as the British Grand Prix, the Sebring 12 Hours race in Florida and the Le Mans 24 Hours (where he's attended the last 27 times, marshalling the last 14 races).

Back at the Heron Tower, Stoddart's immediate future looks bright. The Heron Plaza's new Four Seasons Hotel will boast the biggest ballroom in London, taking that title from the Grosvenor House where Stoddart received his FM of the Year trophy. Perhaps at some future BIFM awards ceremony, Chris Stoddart will be looking down from the balcony of his own building, joining in the applause as the industry he has dedicated himself to rewards another generation.