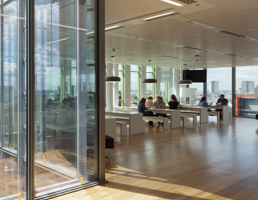 In a new, hard-to-miss London landmark, FM is making its mark for one of the country's major communications agencies

Once upon a time, in a world now seemingly gone forever, communications agencies and their clients worked within clearly defined relationships. A client would bring a brief to an agency, they'd both talk about it and the agency would go off to create campaigns. These would run in newspapers, magazines, television, on the radio or at events. With the parameters of the campaign set, the agency would go away and deliver it. Simple.

Then came the information technology revolution of recent years and, of course, the internet. Today's modern media agency is a very different beast, deploying campaigns across a bewildering array of media (YouTube, social media, virals, video games) and requiring a much closer connection between a more demanding client and the agency's creative departments.

So when global media communications business WPP sought to move its Mindshare agency from existing offices on the Strand, London, how its creative groups worked as a team and with clients visiting the building was a key priority. Moving to the newly opened Central Saint Giles development in London's West End, it believes its found the right formula - with more than a little help from its facilities management team.
Central Saint Giles was named 'best of the best' at last month's British Council for Offices (BCO) annual awards. This mixed-use development has added a splash of colour, literally, to what was hitherto a drab location.

Architect Renzo Piano's distinctive addition to the West End skyline can even be picked out from aircraft circling overhead, such is the impact of the 134,000 brightly coloured ceramic tiles that make up the development's exterior panels. The red, yellow, green and orange tiles help the BREEAM-rated building stand out.

As the first corporate tenant when it moved from its former premises in the Strand, Mindshare's new flagship headquarters boasts 7,246 square metres (78,000 square feet), of serviced desking for over 600 staff on the development's seventh and eighth floor. General office space is joined by partitioned offices around the cores forming the reception, office service areas, tea points and meeting spaces. On the eighth floor, there's a bar and catering area that leads on to a striking roof terrace with even more striking views of the capital. It's proved hugely popular with clients - of which more later.

"Our industry has changed quite a bit," says Mark Creighton, chief operating officer at Mindshare UK. "Where previously we had separate departments dealing with their own aspects of a campaign, increasingly those areas have converged. Clients are asking us to unite our specialists around a brief, which is a challenge.

"In our old building, work would be produced on strictly departmental lines. Specialist teams dealt solely with their elements of a campaign brief - TV, for example, or radio - with each department situated on different floors." Creighton explains how each department would produce its part of the campaign jigsaw before passing it on to someone else - a linear process that involved a lot of running up and down stairs.

In its brief to fit-out specialists BDG architecture and design, Mindshare proposed the idea of 'client villages'. TV, radio and other specialists would sit next to each other and talk about the relationship between those channels and the overall client brief. Phil Hutchinson, joint managing director of BDG, was involved in the fit-out from day one.

"The Mindshare design concept was based upon a ribbon of collaborative spaces running through the centre of the space with the prized views around the perimeter to be open to all. Mindshare wanted a collaborative space to be within five to 10 metres from where an employee sits, with immediate access and not a journey."

Says Creighton: "When we came into this open floorplate, we were conscious that we didn't want to create those silos again. We also realised that we had to accommodate how a brief might change. For example, on some days a TV specialist might need to talk to a data analyst. We wanted to pursue the idea of activity-based working, where individuals didn't have fixed desks, but instead could sit anywhere in the client village."

All of which may have been unsettling for Mindshare's employees, especially as many of them would have spent their entire working lives in discipline-specific teams. Nevertheless, surveying of staff prior to the move established that employees were also keen to see the silo approach ditched and welcomed the potential for professional development that would result from working in multi-disciplined teams, with a variety of skills.

Not having their own desk proved the most contentious proposal for staff, but since Mindshare's move to Central Saint Giles in February, there have been no complaints.
'Client villages' are the physical manifestation of existing management practice. "We already had processes in place that detailed how a brief should work," says Creighton. "A process called storytelling, which is all about integrating the brief across all the offerings we have. The reality is that it only works if you're actually sitting with all the people working on that brief - that's when the concept of storytelling can come to life.

"Our ambition was to have integrated teams without any dilution in specialism and we realised we would have to physically move people together to make it happen."

Mind mapping
What Mindshare has ended up with is a multi-faceted 'collaboration zone' running along the spine of the new building. Around the core are the more formal meeting rooms, with the spines home to a range of informal areas where people can sit and brainstorm. Room space is not bookable. Indeed, there is no room booking. ("We were spending more time administering meeting rooms than using them," says Creighton, pointing to the fact that many hour-long bookings were only used for 20 minute meetings.)

Having clients make use of the space was always part of the plan, but Mindshare has been surprised at just how much extra value their clients are getting from the building. As well as individuals dropping in to do some work on the many break-out spaces - more than ever did back in the old Strand offices - the space is being requested for client training sessions. One client, Castrol,recently conducted one of their governance sessions from the special presentation area on the eighth floor.

"Our industry has always had a reputation for entertaining people," says Creighton, "and now we can do that without leaving the building. This summer was fantastic for hosting clients and letting them see London, whether it was our in-meeting room dining service to our own canteen at the bar." And you can see why - the view from the terrace across the capital is stunning. As an entertainment space, the eighth floor of Central Saint Giles has few rivals.

Eventful time for FM
The new workflow has been a success and has engendered greater interaction with clients
on site. Perhaps the most important change, however, has been in realising the importance of the FM team to the change process. Says Creighton: "Our 'big learning' on this project has been that when you have showpiece office space, expectations of what you can achieve from a facilities sense grow."

"The number of events we put on has tripled: we've had 60 events here so far compared to 20 during the same period at the Strand. Where once we might have taken an event involving 100 people out of building, we're now doing all of that on site."

This has put greater emphasis on what was previously a maintenance-focused facilities department. Mindshare has a five-member internal FM team that it shares with its WPP stablemates and fellow Central Saint Giles tenants, Burson Marsteller. Cleaning and catering are outsourced, with Vacherin providing the catering. But what hadn't been anticipated was the need to outsource M&E. Since the February move, Mindshare's expectations of its FM team have shifted so much that the M&E element of the FM service is now performed by Platinum FM Services.

"What we need from our FM team is very different today," says Creighton. "We now want our space to look fantastic every morning. We've started adapting the space, making rooms different for different meetings in order to delight our clients and partners. Our facilities team has shifted to focus on how the rooms look, making them the best that they can be. They're far more involved in preparation."

Creighton explains that, for his team, the move and subsequent occupation have been a major learning experience. "We didn't expect the volume of events we're doing. We thought they'd be our events, not those of our clients." Creighton describes the realisation that these events were doable - soon, he was putting on three major events a week. "That immediately changes the way you think about your support services and the things you're asking them to do," he confirms.

And although Creighton readily admits his team don't have all the answers just yet, he feels an important corner has been turned. "By no means have we got it cracked yet. But it's made us understand that it's not just about the media people in our business, but also the people delivering our support services, our reception and our catering team.

Where once FM, catering and reception all worked separately, collaboration between those departments has become mission-critical. Working in concert, the three departments understand the space, and know what can be achieved when setting up an event and indeed what could prove logistically impossible.

The size of the FM team hasn't changed since the change in emphasis from maintenance to event preparation, but any extra pressure has been eased by the outsourcing of M&E. Creighton concedes that Mindshare's new appreciation of its FM department is a happy accident. "We realised that we were being drawn into event management, and that this trend wasn't going to go away."