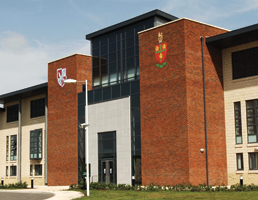 David Arminas finds that at Colchester Barracks, facilities management, provided by Sodexo Defence is, quite literally, a military operation

Hang on to your pass, I'm told by Sodexo's office manager at Colchester's Merville Barracks in Essex. I'll need to show it to get through security.

The reception building is just outside the perimeter fence and ?a stone's throw from the main gate. Inside reception, I hand ?over identification, face the camera and have my picture ?taken for my pass.

At the gate, we show our passes to the guard and move forward, 'inside the wire', past a Douglas C-47B Dakota Mk IV aircraft onto the 195-hectare base proper.

The flat, open site with ?13 km of roads is a 35-year private finance initiative (PFI), which is in its sixth year of operation. It came within the first wave of PFI deals and took 12 years from the feasibility study in 1996 to final phase completion in June 2008.

The presence of the garrison helps to keep 5,000 civilian jobs in the area and contributes around £70 million to the local economy, the Ministry of Defence estimates.

The city has been one of Britain's key garrison bases since 43 AD when the Romans occupied southern England. During the first world war, several battalions of Lord Kitchener's army were trained here.

The current barracks are a big improvement on the previous crumbling Victorian barracks at Colchester, a city whose military history goes back almost 2,000 years. Around 100 hectares have been sold off from the site over recent years, for housing development and parkland
In various guises, the base has been an important training depot since the second world war. Today, soldiers of the 16th Air Assault Brigade and auxiliary units leave for, and return from, Afghanistan, Iraq and other global hot spots and conflicts.

Because the 'client' is Britain's most ready frontline ground force, the men and women have special needs both physically and emotionally. Few FM contracts require the facilities team to be so keenly in touch with these needs as at Colchester, explains Andy Leach, Sodexo Defence managing director. It's not just the needs of the 4,000 military personnel, but also their 7,500 dependents, many in married quarters.

Part of the service
The vast majority of Sodexo employees are former military personnel. They know their client and know how important a well-run, efficient facility is to the soldiers, says Leach, who himself was a naval officer serving on ships from 1980 to 1988.

"Around two-thirds are ex-military staff," he says. "Many of the senior managers are former warrant officers who understand the culture and the ethos of the client. They've been there and can deal effectively with operational issues and front-line services to the client. Most civilian Sodexo staff are involved in business development work."

That's not to say Sodexo's ex-military staff have divided loyalties, he explains. It simply means that mission failure is not an option. It's about serving, says Leach. "We're part of the military community and are now in a position to give something back. This is also why Sodexo supports and sponsors a lot of military causes and other charity work. ?It isn't actually mandated by Sodexo head office, it's just something we do."

The centrepieces of the PFI project are the Junior Ranks Single Living Accommodation and the Central Production Unit, a food preparation factory that supplies the kitchens and restaurants around the base.

"Each soldier has their own room with en-suite facilities. But this is an optional living accommodation for which they pay a small premium," says Leach whose military training included sleeping in large dormitories.

"Usually, four to six soldiers share an accommodation unit, a more traditional arrangement. But times change and the army has moved with the times."

Leach explains there are arguments both ways. "Single people are now more used to having privacy," he says. "But what hasn't changed is what happens out in the field and on the parade ground and that's where the real comradeship takes place - the most important thing."

Another fine mess
A cliché it may be, but an army does march on its stomach. And at Colchester, the preferred dish is chicken Korma. Food here is a serious business. So serious that Sodexo built the Central Production Unit (CPU), the Ministry of Defence's only ?on-site food preparation facility.
Visitors get suitably kitted-out for a tour of the CPU, including a disposable hairnet, protective coverings for the shoes and a white coat. Items are not to be carried and if you wear glasses, always be aware of where you put them, visitors are told. Visitors wash their hands and then use an alcohol-based hand-cleaner as an extra precaution.

The CPU is basically a medium-sized cook-chill food factory that assists in serving 1.5 million meals a year. It buys in bulk, everything from fruit and vegetables to meat and drinks purchased from existing MoD contracts using ?MoD suppliers.

On average, it goes through ?150 tonnes of potatoes and ?11 tonnes of beef a year. The monthly production volume of prepared meals is between 4.5 and 16.5 tonnes, depending on how many troops are on the base at ?the time.

Bulk food-stuffs arrive and are sorted, prepared, stored and also cooked according to what the restaurants on the base have ordered. Frozen goods are stored in -20° storage rooms and meats are cut in special preparation areas. The CPU also prepares packed lunches for troops to take into the field.

Trooping the colours
Visitors are allowed in green areas only to avoid bacterial contamination in the more sensitive red areas where food is cooked and packaged. Red areas are the final stage areas where cooked food is packaging in cellophane-wrapped trays for distribution to the messes on base. Hygiene is paramount, says Louise Roberts, technical manager of the CPU and a microbiologist by training.

More than 10,000 microbiological swab tests are carried out per year on counters and in other areas, with a 99 per cent pass rate.

The green and red areas meet where three large vats are boiling water, ready for the introduction of pasta. On one side of the vats, red area employees stir the vats. Green area employees on the other side are not allowed to touch the vats. Breaking this rule is a disciplinary act, says Roberts.

The restaurants prepare some food, but use a lot of prepared foods from the CPU. Mess kitchens are staffed by military personnel to keep the chefs' skills sharp, says Steve Addley, Sodexo's services director at the barracks and a former warrant officer. This is important for when they head ?out with their units to man the ?field kitchens.

Sodexo also runs the quartermaster services that keeps the soldiers supplied with combat clothing and uniforms, from boots and tunics to bulletproof vests and anti-glare sunglasses.
It also provides laundry services, tailoring needs, management of unaccompanied baggage for soldiers moving away and the management of local community and authority official activities equipment such as flag poles, saluting dais and barriers.

This service also manages a 69-bed accommodation block, basically a hotel for all types of base visitors, including people on training courses, sports people on training work, witnesses attending military courts and general soldiers-in-transit. Last year, around 1,400 people were accommodated.

In a display area of the quartermaster stores, the Sodexo team has laid out the kit issued to each soldier. A weighty bulletproof vest gives an indication of the physical stamina needed to be on patrol. Being shown a piece of bullet that was stopped by a vest's inch-thick plates puts a soldier's job into perspective.

Not part of the PFI deal is the base's Personal Recovery Centre, to be opened in February. Sodexo will run the 30-bed rehabilitation centre being built inside the wire by the MoD, along with a capital cost contribution of £6 million from Help for Heroes charity, which will also give £200,000 a year for running costs. Another £550,000 will be given by the Royal British Legion towards running costs.

Work hard, play hard
Opposite the new centre and around 60 metres 'outside the wire' is the sports centre, the Corporal Budd VC Gymnasium. The eponymous Bryan Budd was awarded the Victoria Cross for his gallantry during close combat in Afghanistan in 2006.

Attached to the centre are tennis courts as well as rugby and football pitches and athletics tracks. Inside are squash courts, weight-rooms and aerobics facilities, a 25-metre swimming pool, a large gymnasium for basketball and other team sports, and a boxing and ?sparring room.
Military personnel can walk through a special gate in the wire to reach the centre, which is outside because it is shared with the local community. Otherwise, the centre is a five-minute drive after leaving the base.

More than 30 organisations, including schools and community groups as well as individuals, use the centre. The military-based membership, and their dependents, is around 12,000, while upwards ?of 1,000 people a day use the sports centre.

But the centre must not undercut local private and public sports centre charges, an act that might be considered anti-competitive behaviour because it is funded by the MoD.
Also outside the base are the 2,000 married quarters - houses built from the 1960s onwards. Sodexo takes care of maintenance, furniture needs of families ?and refurbishments.

Next to the married quarters is a small community area that includes a Londis-branded supermarket - run by Sodexo. While the local post office recently closed down, the post office within Londis is kept busy, says Dawn Warden, retail manager. The post office alone is a community focal point, she explains. It is vitally important ?for military families who send parcels to soldiers on operations.

It's that sense of community throughout the contract that ?drives the Sodexo commitment, says Leach.


Vehicle moves 18,000 per year
functions held at the 'Musket Club' pub (including weddings, christenings and welfare functions) over 200 per year
number of guests provided for 30,000 per year
security and car passes issued 11,000 per year
combined bed occupancy of the two on-site hotels 143,000
items stocked and sold in supermarket 4,300
windows washed per year 15,000
keys held for specialist doors, cabinets and buildings 100,000
married quarters supplied (including furniture) 2,000
badges sown on to uniforms per year 106,000
individual pieces of uniform/kit for exercises and deployment 300,000 per year

Andy Leach CV
Andy's first-hand experience of life in the Armed Forces started in 1980 when he worked as a logistics officer in the Royal Navy. He served on HM ships Interpid, Bristol, Invincible and Royal Fleet Auxilliary ship Reliant. He was in the navy during the Falklands war in 1982 and took part in the operation to evacuate the military and civilians from the conflict in Lebanon in 1985.

Sodexo supports:
- The Soldiers', Sailors' and Airmen's Families Association, the national charity that supports those who serve or have served in the military
- The Royal Navy, Army and RAF Benevolent Funds
- The Royal British Legion
- Help for Heroes
- The Naval, Army and RAF Families Federations
There is also a Sodexo gift in the Christmas ?boxes that go to all service personnel deployed ?on operations.

Sodexo Defence sponsors a number of military sports teams, including the Army Rugby Union and boxing teams, the Royal Navy's hockey and netball teams and the RAF cricket association.