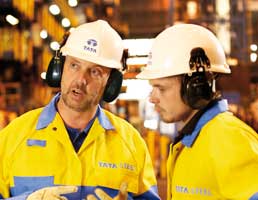 Trostre Works is an imposing building for an imposing operation. 50-tonne cranes and articulated lorries operate within the biggest brick building in Europe.


Formerly owned by Corus, and British Steel before that, Tata Steel's Trostre manufacturing plant in Llanelli, South Wales, is based in a 55-year-old building dating from the immediate post-war expansion of the steel industry. Each year, the plant produces half a million tonnes of tinplate, electrolytic chrome-coated and polymer-coated steel.
Steel arrives in 'hot-rolled coils', which is put on to production lines where it is cleaned in acid (a process called 'pickling'), tempered, annealed (heated and cooled to eliminate impurities) and coated. The finished product is then delivered to some of the UK's biggest canned product manufacturers. Customers include household names like Heinz, Crown and Ball.


Vinci Facilities has supplied hard FM services on the Trostre Works site for over a decade and, since 2007, has operated as the site's total mechanical support service provider. Early last year, the initial three-year contract, valued at £3 million per annum, was renewed for a further three-year period. The company now provides 95 per cent of Trostre Works' infrastructure services, maintaining and repairing everything from heavy plant machinery and steel presses through to the roof and other elements of the building fabric. It also provides civil engineering (as and when required), from cementing to groundwork.


For Max Humber, Tata Steel works manager (packaging), and David Mitchell, engineering development manager, the approach taken to hard FM on the Trostre site is a source of considerable pride. The contract is a result of a rationalisation of both product and process that happened in 2007. "Today we supply 80 per cent of the UK market within a two week lead time," says Humber, who explains that it had been traditional in metal processing for customers to place an order and wait to receive the material eight to 12 weeks later. "We've rationalised our raw material options [down to a handful from an original 200] and taken out a lot of inventory between units, allowing us to process material more quickly." The two-week turnaround, believes Humber, has led to a closer relationship with customers, and the ability "to respond to seasonal market demands."


The hard FM contract was designed to support the newly rationalised workflow, and has also led to changes in the way ?Tata Steel's own engineers work.


Since 2007, the entire requirement for fabricators, fitters, riggers and other mechanical tradespeople across the site has been entirely fulfilled by Vinci as Trostre's principal hard FM contractor. Today, a core workforce of 44 specialist maintenance personnel works full time on planned maintenance projects, with additional labour brought in where necessary.


Humber explains: "Raw material is half of our cost - everything else is what we pay to convert it, so there's a perennial requirement ?to see what fixed costs we can make variable."

FM's supporting role
Humber emphasises just how important it is for FM and maintenance to be highly responsive to the needs of a steel processing business. "We work hard at planning when we shut our units down for maintenance, and when this happens we only have a short window of time; we need to be ready with the right skills, materials and people."


As well as the financial savings implicit in dealing with one set of overhead fees rather than nine, the move to a single core team on site meant greater flexibility for both client and contractor. The previous patchwork of specialist contractors meant it was difficult to find consistent work on the site to keep each specialist trade team occupied. Some individual contract work could have been as little as a day. Now, as well as regular PPM work, some of the work previously sent out to external workshops is managed by Vinci on site.


The greater permanent presence of core contract personnel who can work on more than one specialism rather than a single niche skill means that Trostre Works can now guarantee the availability of labour five days a week, 52 weeks a year - important when looking to ensure the consistent availability of capable personnel. "We get more loyalty from them and they become part of Trostre's family," says Mitchell.

Gain-share scheme
Dave Bretherton, senior project manager for Vinci Facilities on the Trostre site, says that the way both companies work on the contract allows for a more consistent approach to training and safety issues.


"The way it's structured means that we're incentivised to tighten up on productivity. If we have four guys for eight hours on a particular maintenance job, we now measure that and ask ourselves if, when we carry out  that job again, we need the same amount of labour. It's always a question of driving down the overall maintenance cost."


The contract is structured around an annual pot of 53,000 man hours allocated across three categories of work - core labour (work involving the full-time personnel), additional labour (brought in at an additional charge) and work set aside for the two plant shutdown periods. The contract has an element of gain share, in that both parties work to a figure of 49,000 hours; if they hit that target (and they have done in each year so far), Vinci effectively gets a bonus of 2,000 hours based on a 50/50 split.


Thus far, Vinci has absorbed the costs associated with employee labour inflation on the contract. "From our perspective, we've effectively seen a fixed price for the duration of the deal," says Humber. "That will mean that by 2014 we'll have had six years where both parties have operated on a level playing field; that's helped concentrate the ?framework of the contract so ?that everyone involved is ?focused entirely on service delivery rather than looking for their own commercial advantage."


With such a close relationship comes an appreciation of the impact felt by the contractor whenever planned maintenance work is cancelled at short notice. Humber says that his team is making concerted efforts to reduce and ultimately ?eliminate such cancellations. "We're measuring our performance against that now.


"Responding to changes in customer requirements is obviously very important," he says. "But now we're giving greater consideration to whether we should keep to the agreed maintenance activity and recover the level of output immediately afterwards." Humber explains ?that although this change in emphasis is subtle, it helps both parties to keep things running smoothly. "We're getting a lot better at it and, in fact, we're ?just developing a process where we're putting fortnightly look-ahead programmes in place so ?on each Friday, we have a very firm picture of what we're doing next week."


KPIs on the contract are ?based around safety performance, maintenance activities and production capability, with a reward element to incentivise Vinci to come up with the improvements and get financial benefit for themselves. "It's not simply a question of reducing machine downtime; suggested improvements can also be based on how we manage the overall scope of the contract."

Planning for change
Vinci is encouraged to come up with two continuous improvement ideas a month that it puts forward at monthly meetings. Recent examples include a pneumatic hoist for speeding up process of loading the rolls on to production lines and a mobile tool store.


In 2011, renewal of the contract saw several more services amalgamated into the agreement - electrical maintenance, civil maintenance work (as and when required) in addition to services previously added, such as the lubrication service for the site, mechanical spares delivery, general stores operation and drawing office support, as well ?as other single events of a specialised nature.


Vinci's divisional director Tony Girvan talks with Humber regularly and both intend to run brainstorming sessions where each party gets a feel for how the other expects their business to develop. For Tata Steel, a big focus is on devolving contract governance. According to Humber, "we spend millions on contracts and we want to devolve contract ownership to the people closest to the day-to-day activity involved on those contracts. We're making sure that the framework for contractor governance is appropriate."


By 2014, when the contract is next reviewed, both parties expect to have further developed what they believe is a uniquely close working relationship. ("I haven't seen anything remotely like this elsewhere," says Bretherton.)


Can this model be adapted elsewhere in the Tata Steel network? It may take some time. While both Tata Steel and Vinci are happy with the way the contract has developed at Trostre, the circumstances could be difficult to replicate on other Tata sites such as the Port Talbot plant. For now, the immediate future is in fine tuning, both technically and metaphorically.

Shut down, tool up
One of the remarkable aspects of the Tata/Vinci contract is the two 14-day shutdown periods that happen at Christmas and in early August. With the steel processes stopped, a major maintenance project is conducted. During these two-week periods, the number of hard FM staff involved in mechanical and electrical maintenance on the contract can grow from 27 to 75, and includes temporary agency staff.


But while engineers tend to prefer conducting major maintenance during the shutdowns, any work still has to be justified within the context of the contract and its budgetary constraints. After all, lighting and electricity that would otherwise be shut off has to be provided for any work to take place.


Tata Steel and Vinci personnel work out between them where the money for each piece of work has to come from, justifying the project against operational performance.


With so many extra staff on site, this is a particularly important time to ensure that the pool of labour available comprises 'tried and tested' staff. It's a unique industry, with certain engineering tasks requiring very specific skill sets. "We've drawn up a competency matrix to which individuals' skill sets are mapped," says David Mitchell. "We developed it together so that we get the right people for the ?right projects. We'll always look to use the same people, but when we're working with someone who hasn't been on the site before, they won't get a premium job until they've proved themselves on something else."