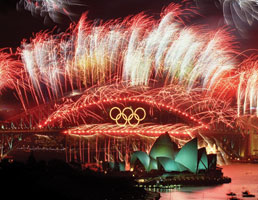 London can learn a lot from how Sydney businesses prepared for the games in 2000.

From the moment the Olympic torch arrives on 18 May to begin its 70-day tour, the ?UK will be ablaze with Olympic fever.

But the 2012 games are not the only show in town. In June, the ?country will also be celebrating ?the Queen's Jubilee and World Pride and hosting the annual Wimbledon tennis competition.

June also marks the commencement of the London 2012 Cultural Olympiad. Parts of the Olympic Road Network come into force to ensure that athletes, officials and dignitaries can get to and from venues. Pre-games training camps will be established around the country (for example, Birmingham will host both the ?US and Jamaican teams), while ?22 live-site venues - large ?screens televising the action ?- are scheduled during this time.

Despite Sydney being the same physical size as London (within the M25), it only has a third of the population, although more athletes participated in the Sydney Olympics than will in London.

And like London, Sydney's firms were planning (and puzzling) how to operate during this period.

The preparations have dominated the public consciousness to such an extent that the process has entered popular culture. (The series 2012, a satirical 'mockumentary' televised on the BBC, parodied the incompetent and misguided preparations of a fictitious organising committee).

It goes without saying that all business should prepare for the Olympics. And it is critical that facilities managers are involved ?in these plans. Businesses in London will be most affected, ?but those outside may need to consider some of the issues mentioned here, too.

Staffing
We have all seen the headlines saying: 'Bank staff told to work at home for 2012'. It sounds obvious, but it's important to find out what your internal customers are doing during the games. This will help you plan what type of service you need to provide and any adjustments you might need to make.
Staffing will be one of the key issues. For businesses to run smoothly during the games, the London 2012 committee suggests London needs to achieve similar figures to Sydney in terms of people management:

A combination of these options should be considered.

In Sydney, workers were asked in advance what options they would take during the games period. Some opted to start work by 7.30am, which enabled them to get a seat on public transport. Others began work at 10.00am, becoming the de facto 'late shift'.

With a lot of people on holiday and before the later shift of people coming into work, the early shift workers found their time was very productive, since the usual business interruptions, such as telephone calls and emails, did not start until later in the day.

The working-from-home option will probably be more successful in London than the Sydney of 10 years ago, when the option was limited to weaker dial-up internet connections. In the era of wi-fi and broadband, expect staff to opt for the home-working option in ?their droves.

Transport for London has published a list of stations to avoid and other helpful material regarding predicted congested times at stations. Organisations with over 200 employees can also take advantage of travel planning advice from Transport for London.

Culture
During the 2000 Olympics, Sydney found itself to be, for a short time, the centre of the world. There was a special atmosphere and TVs were placed around offices (although video feed over the network was then not an option). This added to the atmosphere and workers often stopped to catch up on the latest events, especially when medals were at stake, or to see the latest Olympic story - such as Equatorial Guinea's Eric the Eel. This attitude was no doubt buoyed on by Australia's love for sport.

Former Prime Minister Bob Hawke summed up the nation's attitude towards sport and workplace relations back in 1983, when the yacht Australia II won the America's Cup from the US. Hawke was quoted as saying: "Any boss who sacks his worker for not turning up today is a bum."

Delivery issues
Road restrictions and closures, along with changes in access to buildings, will also come into ?play during and, in some cases, before the Olympics. London ?FMs should start talking to their service providers now to establish ?a plan to deal with delivery of ?goods and services.
It is almost certain that deliveries will need to be made at different times and, if possible, reduced. In 2000, for example, some organisations stockpiled stationery to avoid taking deliveries during the Olympic period. Given the number of people away from most workplaces and the availability of space that wasn't being used, such as meeting rooms, this approach worked well.

FMs also need to accept that, in some cases, mail, DX, archiving and printing deliveries will be disturbed or take place at different times. It's important, therefore, to inform your customers accordingly and set expectations.

The stockpiling strategy will not work with perishable items, however, and FMs will need to have another plan with caterers. A reduced menu and/or hiring additional cold storage units could be potential solutions. Managers are advised to check their contract - you may still be liable to pay ?the labour element even if you plan to close down some, or all, of your facility.

It is tempting to take advantage of the office being quiet for additional maintenance or refurbishment. Don't. Access ?issues could complicate how ?and when this work happens.

In 2000, a concern for Sydney businesses was the emergency servicing of printer and photocopier equipment, given road restrictions and access issues. Suppliers, in conjunction with their larger clients, were stockpiling items within CBD locations so that mobile (on foot or bike) engineers, could quickly respond to service calls with the appropriate parts. This was a good way to continue to build better business relationships as well.


In addition, the threat from international terrorism is due to be raised to severe during the 2012 games (meaning an attack is highly likely), so FMs should review current security arrangements ?and business continuity plans.


Despite the potential difficulties, anecdotal reports of the Sydney games suggest a time of enjoyment and opportunity. Justin Orsborn, a partner in a Sydney law firm at the time, shared his memories of the period. "Everyone thought it would be a disaster and should get out of town. Actually, it was a wonderful time to be in Sydney. We carried on as usual, but used it as an occasion to do extra marketing, for example taking clients to events, which would often lead on to other festivities that were going on. All in all, I have very positive memories."

Much depends on good business planning, though. It is far better to make contingency plans that remain unused than to start thinking about what to do when the unexpected happens.

Simple steps
The following four steps can ?help prepare for the Olympics:

Lasting legacy
When the Paralympics finish and the last athletes and IOC officials leave London to prepare for ?Rio 2016, the London Olympics will come to an end. But facilities managers may feel the effects ?of the games for years to come. Operating your building for longer in the working day (therefore making better use of it), making a change to your service delivery model, or encouraging more people working from home many actually benefits the business, long-term.
The Olympics may bring these issues to the attention of senior management and offer you and ?the facilities department a ?unique opportunity to bring lasting, positive change to ?your organisation.