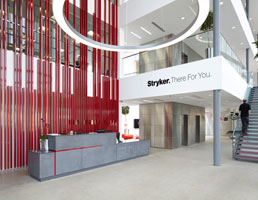 The small town of Newbury in West Berkshire is synonymous with Newbury Racecourse, home to Vodafone UK and, as of September last year, is the home of medical equipment company Stryker's newly built UK headquarters office building.

Stryker supplies medical technology including specialist orthopaedic and surgical equipment to healthcare professionals across the world, including the NHS.

Already a well-established employer in the Newbury area, Stryker appointed Cushman & Wakefield in August 2008 to manage the development of a design and build project to accommodate its growing staff.

Stryker UK started out in a small office in Staines, Middlesex, employing around 20 staff members. In 1998, it acquired Howmedica, a major player in the worldwide orthopaedic market. Staff numbers grew and the company transferred to a building in Hambridge Road Industrial Estate in Newbury. Over 13 years in this building, UK operations grew to 200 staff members.

The previous building was a combination of offices and logistics space in a 25-year-old facility. But with growth and further acquisition, it was evident that this building was not at all suited to the company's needs ?and aspirations.

So, in September 2011, Stryker UK opened its brand new facility, a stone's throw away from Newbury Racecourse. The new building is owned by the organisation and was designed for a 10- to 15-year growth plan.

With flexibility essential, the building was designed in such a way to allow the warehouse space to be converted into office space for future tenants in the event that Stryker wanted to sell on and move.

Back at the planning stage, the proposed purpose-built facility was seemingly the ideal solution for combining both office and logistic functions. But the final decision was not reached before exploring every available option.

"We did discuss adding a third floor into the old building or filling in the outside space, but it would have meant losing a lot of the car parking space. Not only that, it was not feasible financially," explains facilities manager Paul Jackson, who joined the company more than four years ago and took over as project lead two years into the design and build project.

According to Jackson, a typical distribution company would be divided by 80 per cent distribution space and 20 per cent office space or vice versa. In the case of Stryker UK, distribution and office space was evenly split. The new building provides adequate office floor space for current and future needs as well as doubling the size of the all-important logistics facility.

"As well as increasing space, it was a great opportunity to align the office and logistics functions to create better interaction and equality," says Jackson.
The result is an impressive and inviting open plan, three-storey building covering 10,000 square metres (107,639 square feet) and organised around two internal atria. A sweeping treble-height reception invites visitors into the clinical and clean space opening up into non-traditional office floor plates.

The internal spaces can be viewed from the reception space, revealing break-out areas, exhibition space and the first floor subsidised restaurant for visitors and staff.

Other facilities include the free gym, showers on the ?ground floor for cyclists and external terraces overlooking Newbury Racecourse.

The logistics facility is housed on the ground floor where medical equipment, sterilising plants and technical workshops can be moved rapidly and with ease from loading bays. And, like the office space, the logistics area can be viewed from reception, reminding visitors of Stryker's core business.

Culture shock
The new site offers open plan desk space on the second and third floors for 200 members of staff - but with potential space for 320. The space houses sales and marketing teams, customer services and business services.

On the second floor, European directors, finance teams and procurement sit together.
The greatest challenge and culture shock was the removal of private office space, reveals Jackson. In the previous facility, directors and managers tended to be housed in private offices.

To counteract this loss, there are 16 traditional meeting rooms. An online booking system allows staff to save rooms and computer pads outside each room detail bookings. In addition, two funky private meeting pods are situated on the second floor for informal catch-ups and private conference calls.

Desks are carefully divided by shelving units, which add an element of privacy, while non-permanent walls aid noise reduction across the office.

Doubling the building space now allows for sales teams to demonstrate medical equipment on-site to potential clients. Previously, such training took place in the Ark Centre in Basingstoke and hotels in the local area. This has saved a substantial amount of money, says Jackson.

But the working environment has witnessed a marked improvement on all fronts - particularly in the warehouse on the ground floor, where 60 staff members work. One of ?the major services is the loaning and dispatching of medical kits which contain products used for surgery.

This equates to more than 20 per cent of business income and 30 per cent of the warehouse space. There are more than 500 different kinds of kit, which need to be swiftly dispatched to and from hospitals for life-changing surgery.

On average, 200 kits are transported to and from the site on a daily basis. With this kind of pressure, the extra space has allowed for a smoother process.

But with the smooth comes the rough and a project of this size brought its fair share of issues, for example the forward planning required to install a sprinkler system on the ground floor. And two years before the building was even completed, Jackson was responsible for determining where shelving and racking would be placed to house the thousands of pieces of medical equipment.

This level of planning was a must to create a high-tech build for a company selling sophisticated, life-saving medical equipment.

The move from the old premises took place over three weeks and every single item had to be accounted for - a gargantuan job, admits Jackson.

All existing service supplier contracts were transferred across from the old building with additional cleaning and catering required for the double space.
Creating a sustainable workplace was high on the agenda and the company now holds a BREEAM Excellent rating.

This was achieved through a number of initiatives, including a biomass boiler plant that is fitted with a 'smokeless' exhaust to comply with the Clean Air Act, and a solar thermal system that uses sunlight to pre-heat the water for use in toilets, showers and the catering kitchen. The systems have achieved a 15 per cent reduction in the company's carbon emissions targets.

In addition, all areas of the office space have sensors that dim the light in the office ?as natural light streams through. Shading and high-quality glazing also helps to restrict heatgain.

With growth and acquisitions over the past few years, Jackson believes the site fully supports the workforce and successfully aligns reporting processes.

"We now have a fully flexible building that can adapt with the ever-demanding and ever-changing medical industry," ?says Jackson.

"More and more external staff and visitors come to this site to enjoy the facilities and we now have a building that all staff are proud of and are happy to show off."