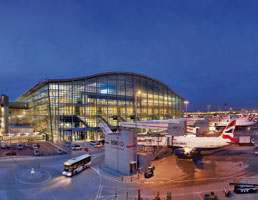 With over 7.5km of quayside, the Port of Tilbury is a major conduit of overseas freight to London and the South East. Martin Read finds how the FM team is expanding its offering to clients

Although no flights arrive or depart from Heathrow airport from midnight to 5:30 am, Terminal 5 never sleeps. In fact, the doors to T5 are never locked and for Amey, the cleaning never stops.

The 10-year contract at Europe's largest free-standing structure is worth £10 million a year to Amey, which took on the contract in January 2010. Between 80 and 105 operatives work on a daytime cleaning shift at the flagship terminal, as well as its smaller satellite terminals 5b and 5c.

The ceiling soars overhead and expansive concourses stretch into the distance. The feeling is one of brightness, thanks to the glass 'walls', which are part of the roof structure. In simpler terms, the floors of T5 sit underneath a huge canopy whose walls have no contact with the interior.

Passengers have impressive views out to docked aircraft and taxiways. Natural light floods the interior and passengers are treated to vistas down the length of the interior.

When the building is closed to passengers in the wee hours of the morning, Amey's cleaning staff shift into top gear, literally. Specialist cleaners abseil from pillar to pillar, or hang suspended along long glass windows.

That closed period is essential for bringing in the special teams, says Tristam Slater, Amey's account manager for the T5 contract. If the doors were locked, he says, it would be a "logistical nightmare" to bring in cleaning vehicles and other equipment because security would have to be constantly alerted and documents checked.

Amey brings in scissor and platform lifts for operatives to clean places that most people never see. The huge white-painted steel structural girders that rise from the floor-plate must be dusted and washed, as must the acres of windows and internal glass encasing lifts, stairs and escalators.

In the open-plan back-office, Amey staff sit alongside that of its main business partners - airports operator BAA, airline BA (sole airline at T5) fire and safety systems provider Honeywell and Kone, which maintains all lifts and escalators.

To ensure the left hand knows what the right is doing, at 8:30am every morning there is a 15-minute stand-up meeting of people from all partners, explains Slater.

Slater, a mechanical engineer by education, is passionate about lean manufacturing, a system that Amey has adopted. The idea is to remove waste from the process of 'making the product'.

At T5, the product is "a great passenger experience", says Slater. "You don't add on features - waste - that don't directly produce the product, in this case the great experience."

Slater, because of his engineering background, is eager to talk numbers. The key to lean manufacturing is data collection and its analysis.

"Data is so very important. For example, when there are more passengers using the airport and when flights are cancelled, added or delayed," he says. "There is an effect on passenger flow to lounge areas and retail spaces, as well as toilet usage and restaurant visits."

The issue for Amey is where and when does it focus its cleaning efforts to produce that great experience for passengers, which currently number around 26 million a year.

Two things were needed to ensure lean manufacturing working, explains Slater. One was for all the business partners to share information and frequently communicate updates. This is where a good relationship with BA is essential to get data about flights, from which Amey can predict passenger movement around the terminal.

The other essential thing was to get the Amey team up to lean manufacturing speed. A 'Six Sigma' (see box) consultant was brought in for a day to train senior managers and the philosophy was then rolled out to operatives.

If a manager knows that a flight is delayed, he will have an idea that more people will be waiting in a dwell area, such as a passenger lounge.

All operatives carry a mobile phone-come-walkie-talkie so they are contactable - and to know what other operatives are doing and why. Operatives' coffee breaks can be rearranged to accommodate passenger increases and decreases.

However, moving around quickly in a building nearly 400 metres (1,300 feet) long takes time and can be dangerous.

Health and safety concerns mean fluids spilt on the floor must be cleaned up within five minutes. But a cleaner pushing a trolley through crowds could miss the time target and in the process run his trolley into a passenger.

Operatives use stop watches to time their efforts and to station extra trolleys inside back-office areas. Using this method, an operative can get through the crowd on his or her own quickly and then pick up a trolley nearer the destination area.

There is also a psychological element to cleaning, says Slater. If a seat in a waiting area is full of old newspapers, paper food trays or coffee cups, people tend to not sit either side of it. So three seats are out of commission if the waste is not cleared.

"But if passengers see more staff cleaning around them, they are inclined to get up to put their waste in a cleaner's trolley, so more time is saved," says Slater.

Working at T5, for no matter what company, is like being on a single team - and passengers see it that way, too, says Slater. To help ensure the 'great passenger experience', staff must be able to answer passenger questions when taken aside, as is likely to happen to anyone wearing a security tag out on a public concourse.

Sure enough, and right on cue during the walk-around with FM World, several passengers approached Slater with questions. "Where is the baggage collection" and "where can I change my flight" - all in a day's work.

Terminal 5 was completed in 2008, after which satellite terminals 5b and 5c were constructed to serve steadily increasing passenger numbers.
Amey is delivering a 10-year total FM contract for airport operator BAA, valued at around £115 million. Amey has 439 staff - the majority being cleaners.
In January 2010, Amey started delivery of hard and soft services, which includes:

Amey manages the relationship between itself as the main FM supplier, BAA, and the other specialist subcontractors.


The firm also has a separate contract for Terminal 4.


The Civil Aviation Authority (CAA) monitors and regulates FM at airports. Groups of assessors - similar to 'mystery shoppers' - visit the airport and speak to passengers to gauge their perceptions of cleanliness. FM providers are assessed in terms of the cleanliness of five core areas:


Results are marked out of a maximum of five points and providers must achieve over 3.9 or face fines by the CAA. Amey achieved "a record 4.29" at the end of last year.

Glossary
SIX Sigma
Six Sigma is a business management strategy developed by electronic giant Motorola in the US in 1986
and refined at General Electric in the US in 1995. The strategy is to improve the quality of outputs by identifying and removing the causes of defects and variable quality in the end product.

Perspectives
Breaking the language barrier
Major international airports can be a confusion of tongues and where general confusion and stress are often close to the surface for many passengers. For this reason, Amey gives its staff communication training specific to an airport environment.

English may not be an operative's first language, says Caroline Barnes, the cleaning training manager at Amey who is also a British Institute of Cleaning Science training assessor.

"For a font-line operative, being from somewhere else other than the UK is a distinct advantage at T5," she says. "Around 31 languages are spoken by the team. It's common for cleaners to be called on their mobile to assist other terminal staff who don't speak a passenger's language."

Amey also provides courses that look at typical questions likely to be asked by passengers, such as, "Where is the baggage collection?" and what the operative's responses can be. "Where is my flight leaving from?" and "Where is the departures lounge?" are usual questions.

To help build a new operative's confidence, they get three days off-site training before going on site. Even then, they are accompanied by a 'buddy' for three days, says Barnes, who has worked at T5 since it opened in 2008.

Factbox
Cost: £4.3 billion
Main terminal footprint: size of 60 football pitches; 396 metres (1,300 feet) by 176 metres (578 feet); seven floors - four above ground, three below
Terminal 5 and satellite terminals 5B and 5C are linked by an automated track transit system that goes every 1.5 minutes and takes 45 seconds
The area of T5's three buildings is more than the total of Heathrow's other four terminal buildings
Source: Mott MacDonald, lead designer for T5