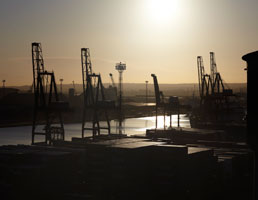 With over 7.5km of quayside, the Port of Tilbury is a major conduit of overseas freight to London and the South East. Martin Read finds how the FM team is expanding its offering to clients

The tide is changing at the Port of Tilbury, London. The in-house facilities management team that provides for the port's own operations on the 280-hectare site is looking to spread its wings. The team is now offering its own FM and engineering expertise to more of the 150 tenant organisations that operate across the estate.

2011 marked 125 years since the first ship sailed into Tilbury. Aside from an ever-expanding level of trade, the docks have certainly seen their fair share of history. They played their part in the fit-out of battleships in the second world war, were the point of embarkation for the 'ten-pound poms' emigrating to Australia and offered the  first breath of English air for immigrants arriving from the Caribbean during the 1940s and 50s (the famous ship Empire Windrush docked here).

Today, the Port of Tilbury has the third biggest container terminal in the UK, and as part of  Forth Ports group, it's one of the UK's largest port operators.

The site has its own police station and customs and excise office. Port of Tilbury directly employs more than 480 staff.

It operates a passenger terminal, four container roll on/roll off terminals and a number of other conventional and bulk cargo berths. The remaining berths on the estate are occupied by tenants, who themselves employ in excess of 2,600 personnel across the site. This, coupled with indirect and induced employment, means
the port helps sustain over
5,000 jobs in Thurrock.

The role of FM
The current focus of service development is the provision of FM services procured and managed by the port's own FM department to the site's tenant organisations. Tenants typically procure FM through a mixture of the port's services and their own contractors, so by focusing on the offer of services sourced centrally through the port's FM department, senior procurement and facilities manager Andy Darlington hopes to gain more control of on-site personnel while offering tenants better value.

Everything is geared to keeping the port fully operational, no matter what. The port's on-site civil engineering team is on alert to repair any damage that might be caused around the site (specialist fenders are positioned to deal with less significant scrapes). Dealing with any damage promptly helps avoid any delay to the port's operation - an inconceivable notion, given the 13.5 million tonnes of cargo and over half a million containers that are moved in and out of the port each year.

Indeed, there's a sense of perpetual motion at Tilbury. Viewed from the top of the grain terminal, itself an imposing structure, you notice a remarkable fluidity of movement as the port's large fleet of straddle carriers - vehicles used for moving and stacking containers - pick their cargo and move it from ship to port, port to train and port to trailer. Anything that impedes the smooth flow of these giants, each capable of lifting 40 tonnes at a time, needs addressing urgently.

Port of Tilbury's in-house plant engineering team are responsible for the vast fleet of heavy lifting equipment necessary to sustain the huge volume of cargo being moved by its own operations.

Shifting focus
The port's focus on a more commercial FM department is the direct result of the arrival on site of significant new tenants three years ago. Their requirement for a wider-than-typical range of logistical
and engineering FM services led
to the realisation that the same could be offered to other clients across the estate.

This indicates the diverse range of projects undertaken. But more routine FM services for asbestos, legionella and grounds maintenance have all seen a significant increase in turnover in the past 18 months, as Darlington and his team enter into dialogue with tenants. On FM World's visit to the site, Darlington was working on a tender for a window cleaning service that could be rolled out to the wider tenant base.
"It's all about giving our FM offering more of an identity," says Darlington. "We want to take what we currently do for our larger tenants and offer it out to the wider port community."
Leases on the Port of Tilbury
site vary in age, length and the amount of flexibility written into them, and Darlington concedes that it will be a challenge to convince some tenants of the value of the port's own FM offering when they are constrained by existing arrangements.
But it's a steady process of development that Darlington has great confidence in. "It's up to us to convince our tenants that we can offer them less administration and a better quality of service," says Darlington. "Our job is to sell FM as a service to them."

Keeping compliant
But the prize is as much about 'reputational risk' as it is about potential extra revenue. Darlington cites having control of compliance as the main reason for the FM project. "When tenants use their own service providers, we have no control over the competency checks of suppliers those organisations bring on site," says David Housden, the head of engineering and procurement to whom Andy Darlington reports. "By providing the service ourselves or through our own list of preferred contractors, we'll know that the people on site are competent, properly accredited and insured for the work they're doing."

The hope is that tenants will be gradually swayed by the argument in favour of leaving the administration of method statements and risk assessments in the hands of the port as FM service supplier.

The port has just completed a rationalisation exercise among its own contractors, settling on a smaller pool of companies that tick all the compliance boxes.

"Utopia would be every person coming through our gates having an access permit that is recognised on our system," says Darlington, who explains that a list of approved vendors has been drawn up. "We'll at least want tenants to choose from our list of preferred suppliers," says Darlington. "We have an internal 'yellow pages' within which that list will sit."

Housden says that the risk to the port's reputation is a major factor in the new approach.
"If things go wrong, the perception the media portrays is that it's the Port of Tilbury at fault, not the tenant. The more services we can provide ourselves, the more
we can control the compliance aspect centrally - and that will
be a great help." Darlington cites a range of compliance issues that a wider provision of FM could help with, including boiler maintenance, legionella control
and electrical testing.

As well as BS EN ISO 9001, 14001 and BS OHSAS 18001 accreditations, Darlington is
keen to keep close to the port's policy of local procurement
and employment, contracting with smaller companies in Essex or north Kent rather than larger, national players.

Darlington's role across procurement and FM has been formalised in the past 18 months as part of a raft of changes at senior level. Housden took responsibility for the port's central plant engineering and purchasing departments last year, and new appointments were made elsewhere in the team.

The port is casting its net wider in order to reel in fresh talent. Facilities manager Dean Botten, whose experience of FM includes time at the Ministry of Defence, joined in 2010 from an office-based FM job in the City of London. He was attracted by the challenge of modernising the FM function and is closely involved in the development of FM as a 'one-stop shop' for clients. On FM World's visit, Botten was dealing with the forecast of a particularly cold snap, managing the port's gritting operation - one of the first services to be offered out to the wider tenant network.

True grit
Tilbury grits its own assets, in particular the perimeter road that comes under its jurisdiction. Failure to do that and trailer vehicles would begin to back up along the adjoining A13, with the potential of bringing the entire county of Essex to a halt. A realisation that harsher winters are becoming the norm led to Port of Tilbury procuring its own salt spreader. The company now imports its own grit (through one of the port's tenants), which it now offers as part of its gritting service to the entire tenant base at a competitive rate.

Port of Tilbury already grits the facilities of its major tenants, a service for which it charges. With a lower price and the convenience of instant access, the FM team has incorporated gritting into the menu of services that the port's smaller tenants can buy into - a project that has steadily been built up over the past three years.

Recent years have seen significant capital expenditure projects across the port, including the use of low-energy light sources and the pre-heating of diesel fuel to cut the amount
used by the straddle carriers. That last project resulted in a reduction in diesel expenditure, Housden says that being seen as Britain's greenest port is important to them.

Building the future
Two key events will affect the future of the site's FM team.
The first is a 65-acre extension to the port, to be known as the 'London Distribution Park'. Work to build the new offices and warehouses on 65 acres directly to the north of the existing site will begin soon, having recently gained the government's seal of approval. While the work is to extend the capacity of the port to meet its projected future growth targets, it will actually result in a reduction of lorry movements - and the port's overall carbon footprint.

LCT has its own FM department, and David Housden now needs to consider the implications of this acquisition on his own plans.

Clearly, the opportunities for the port's FM team to service its new logistics facility and integrate with its sister operation will continue to make life interesting for some time to come.