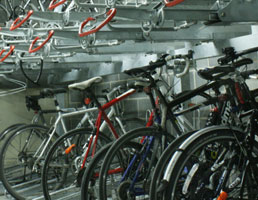 Britain's cycling revolution is shifting into high gear. What preparations are you making for your workforce? Writes Simon Wicks

Even in a recession there are success stories. Take cycling, for instance: until the mid-2000s, cycling had been in decline in the UK for half a century. The increasing affordability of cars and transport policies aimed squarely at motorists pretty much put paid to the humble bike as a convenient way of getting around.

But now it's undergoing something of a revival. In 2010, there were 28 per cent more bikes sold (3.7 million) in the UK than in 2009 and 1.3 million new cyclists. According to The British Cycling Economy, a comprehensive report into the economics of cycling in the UK, there were 13 million adult cyclists among us by summer 2011 - and almost eight million were more than just occasional riders.


This is still far from the bike's early 1950s heyday or the ingrained cycling culture of the Netherlands, where one in four journeys are taken by bicycle. But the government now freely promotes cycling as an antidote to a range of social ills, from congestion to obesity, in its transport, health and environmental planning. Investment in public cycling infrastructure is increasing, too, through initiatives like the £560 million Local Sustainable Transport Fund (LSTF).

The once-neglected bicycle, it seems, has become a means to freewheel towards a more enlightened future. And workplaces, the advocates feel, have the potential to become enabling hubs in the social and physical networks that will support this change in culture. But how? And why should they?

Workplace facilities
The British Cycling Economy identifies two basic incentives for employers to develop cycling-friendly workplaces. The first is that there is a growing army of 3.2 million cycle commuters in the UK and thus a growing demand for parking and showers. The second is that cycling slots fit into the corporate social responsibility agenda as a clean form of transport and a contributor to employee wellbeing.

The report's author, Dr Alexander Grous of the LSE's Centre for Economic Performance, also argues that cycling has a straightforward economic benefit for employers: research suggests that cyclist take one less sick day per year than non-cyclists, which could equate to a saving of £600 per cyclist per year - or £128 million across the UK economy at large.

"Cycling falls 100 per cent within the bulls-eye of facilities management," says Grous, whose latest research into the promotion of cycling will be published this summer (see 'What gets people cycling to work?', right). "The number one reason for cycling to work is that you have a shower and changing facilities at your destination. Where companies put in showers, they get an additional 2-10 per cent of the workforce taking up cycling."


When both showers and cycle storage are available, Grous says he's found firms where as many as one in every six staff will ride into work. But while he's finding a will among organisations to support cycling by employees, there are barriers, especially among small- and medium-sized enterprises.

"Maybe 10 per cent of the businesses I've spoken to said they were planning to spend on facilities or put them on their agenda. No organisation said to me 'We won't do it'," he explains. "What they did say, though, was that they were budget-prohibited or space-prohibited."

Cycling infrastructure
Beyond workplace facilities, employees feeling safer on the roads and short commuting distances would also encourage them to commute to work by bike. These may seem beyond the purview of facilities managers, but Grous and others would argue otherwise.

"Organisations can influence the services and structure around them," says Graham Titchener, the i Travel York programme manager for the City of York Council. "If there's a collection of businesses at a destination that might want more investment in the cycling infrastructure, any local authority worth its salt will fill in the gaps."

From 2008-2011, York was one of 18 English towns and cities that received a share of £140 million in match-funding from the Department for Transport, the Department for Health and Cycling England under the Cycling Cities and Towns (CCT) initiative. Most of this money was spent on creating cycle routes, setting up cycle schemes and promoting cycling.

But the authorities also worked with businesses and many provided some match-funding to help install facilities - sometimes with surprising results. Titchener himself cites the example of a £2,400 grant to Aviva that triggered tens of thousands of pounds of further investment by the company across three sites.

However, the CCTs mainly focused on stitching together businesses and the facilities, services and incentives that were being created around them, such as cheap bike training, personal travel planning and award schemes for cycle-friendly employers. The results have shown what is possible with a co-ordinated approach.

In York, for example, where Titchener worked with influential employers, Nestlé had to quadruple its number of cycle racks. One in six of the city's population now cycles.

In Bristol, where transport planning officer Philip Wright worked with SME businesses, there was a 48 per cent increase in cycling from 2007-2011 and cycle journeys now outnumber bus journeys in the city. Wright cites renewable energy consultancy Garrad Hassan, where two-thirds of the workforce now cycle after the company decided to promote cycling and install facilities during an office move.

Such 'transitions' give organisations good opportunities to change their own - and their employees' - habits, Wright feels. But Bristol has barely scratched the surface. "We had the best part of £23 million and we thought we would be able to do everything we want to do," he admits. "But in fact we're nowhere near. A lot of it is simply building infrastructure."

Cycling infrastructure in most of the UK is either poor or non-existent. Even though the LSTF is now available, government still commits less than one per cent of the national transport budget to cycling, many local authorities sit on the fence and there is scant support funding available to employers themselves. These are major limiting factors for organisations that need to feel they can slot into a wider infrastructure in order to achieve their cycling goals.

Are the incentives strong enough?
Nevertheless, demand from the UK's millions of cyclists is there. There are examples of the private sector stepping in to plug a gap - such as the Dutch-style secure bike storage and hire facility next to Leeds railway station or the H2 gym in London, where showers are also available - but these are few and far between.

"We are where the Netherlands was in the 1970s, where they had congested cities and high child mortality through road accidents," says Wright. "They put a long-term strategy in place. That's where you need brave politicians - someone to stand up and say 'We're going to do something about this'. People won't necessarily agree with it because we're very car-centric, but in 20 years' time they'll say 'Yeah, you were right'."

In most parts of the UK, the onus is on employers themselves to create cycle-friendly environments. But are the incentives strong enough? Where's the return on investment? Aside from reduced sickness absence, Grous says cyclists tend to arrive earlier at work and leave later, to avoid peak traffic. He's also calculated that cycling was worth £2.9 billion to the economy in 2010.

Duncan Young, sustainability manager at Lend Lease in London (see 'Cycling is the new golf', right), argues that the exercise improves productivity. "The main thing for us is the health and wellbeing of our employees," he says. "We believe that healthy employees are more productive."

Employee engagement and retention, public profile, reduced carbon footprint and fulfilling corporate social responsibility are also frequently cited as reasons for employers to enable cycling. There's not a single clinching argument, but rather an accumulation of benefits that are not necessarily easy to measure.

Perhaps Grous himself will provide the answer in the summer. For now, though, he's confident that awareness and promotion of cycling are improving: "I'm seeing a huge change from where we were five years ago," he says.

Simon Wicks is a freelance writer specialising in business issues.