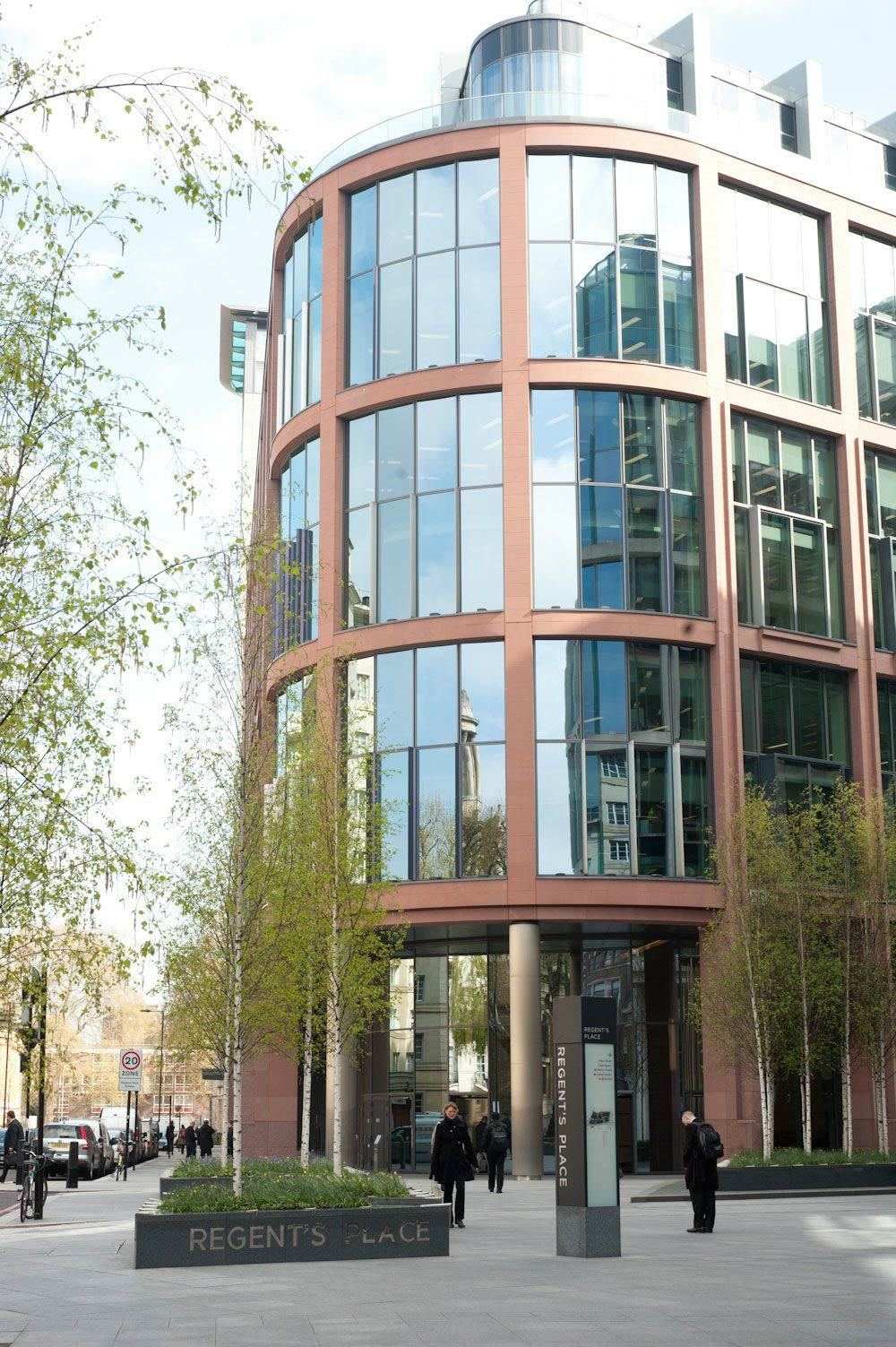 Companies must start justifying their worth to society, with greater emphasis placed on environmental and social impact rather than straight economics." So said Dick Dusseldorp, founder of Lend Lease. When did he say this? Was it at some time over the past decade, as the concept of sustainability has become so embedded in company thinking? No. In fact, his comment was made way back in 1973. Yet today, four decades later, the company's new London office development almost seems designed as a testimony to how this attitude to sustainability has strengthened over time.

Lend Lease operates in more than 30 countries, employing 7,500 people. The organisation sees itself not just as a separate construction or development company, but as the operator of a unique integrated construction model. The company claims to be the largest developer in London, with major projects underway in Elephant & Castle, Greenwich peninsula and the Olympic Park, where it is currently finishing the athlete's village, which it will retro-fit into homes and 370,000 square metres (four million square foot) of commercial space after the games.

In November last year, the construction and property management company took staff from its two separate London offices and brought them together into the new Regent's Place development. 20 Triton Square replaced a central London office in Grosvenor Square and another in Harrow, Middlesex.

20 Triton Square was constructed by Lend Lease in partnership with British Land. (The Regent's Square complex continues to develop and on our visit, Lend Lease construction teams continued their work just metres from their company's new UK headquarters.) Lend Lease itself occupies four of the 10 floors of the building.

Given the building's showcase status, it's perhaps no surprise that the company should pull out all the stops to produce an exemplar of current sustainability thinking.

What might cause people to stop and think is the nature and extent of this work. For example, the company won a 'Green Apple' Silver Award for the use of a low carbon concrete mix in the building's construction, reducing embodied carbon by up to 5,000 tonnes. It boasts a BREEAM 'Excellent' rating for environmental performance and EPC 'B' rating. It's been designed to be over 30 per cent more energy efficient than current standards through greater air tightness and heat recovery, high-performance glazing, motion and daylight sensors, electronic energy monitoring and photovoltaic panels.

100 per cent of the timber used in the building's construction came from Forestry Standards Commission (FSC) certified sustainable sources, with 25 per cent of all materials coming from re-used or recycled sources - pretty impressive figures. Perhaps most impressive, however, is just how much the design meets both aspects of sustainability espoused by Dick Dusseldorp all those years ago - environmental and social. As our tour progresses, Duncan Young, Lend Lease's head of sustainability, quickly switches between both the environmental and social aspects of the building's sustainable design. We learn, for instance, that some of the wooden floor surfaces came from century-old French railway carriages, then immediately afterwards switch to the 'theme of transparency' that runs steadily upwards across the office floors.

"Transparency runs upwards throughout the building," says Young. "We know that people learn through transparency. In the old days we used to learn by reading text books, but today we learn more from observing people. In a resource-constrained environment, we can't send everybody off for training so we want people to learn on the job. If you have an open, transparent environment where people can more easily interact and see what's going on, you get to understand what people do."

As we walk through the building, there are numerous panels allowing people to look in and see what's going on in a particular workspace. As you go up, the number of such opportunities increases. From the corridors you can look across the atrium space to see people at work. The effect is one of seeing the business of Lend Lease effectively animated in front of you.
The breakout areas look and feel extremely comfortable, evoking the feel of a high-quality hotel. Different spaces have been designed for different levels of interaction.

"We didn't just dream this stuff up overnight," says Young. "We conducted two global surveys, in 2009 and 2011, from which we developed a set of key themes about what employees wanted from their offices."

Among the various workspaces are 62 meeting rooms, 30 breakout spaces and 500 desks, all for 500 employees. That may seem like overkill, but is in fact part of the business's plan to be able to increase the workforce, when needed, to 600. ("We didn't want to be scrabbling around for more space. The one-to-one desking we have today is expandable," explains Young.)

All of 20 Triton Square's meeting rooms are IT enabled, with walls that can be written on; document cameras capture the writing and the results are sent straight to the user's laptop. Most of the phones allow for audio conferencing, part of Lend Lease's policy to reduce employee travel and to ensure better interactions. There also are five high-definition teleconference rooms on site.

Indoor air quality is improved through the use of 4,000 Sansevieria Trifasciata plants. Says Young: "In the good old days, plant-hire companies would make money from providing plants to corporates; three months later they'd be ripped out and replaced. These plants are here for the long haul. They have green shoots and need pruning. We know the plants will survive and that they filter out volatile organic compounds from the air."

The only green building standard that acknowledges the health-giving impact of plants, the Australian Green Star, stipulates two plants per worker. Lend Lease has opted for a ratio of eight Sansevierias for each employee. "We based that decision on the body of emerging evidence that suggests that having low chemical environments and filters for your working environment increase occupant health and productivity," says Young.

There's also an organisational aspect - by having plants on all surfaces, staff are prevented from putting their stuff on it; it's actually quite neat looking.

This focus on staff wellbeing also manifests itself in the provision of comprehensive cycling facilities (for more on this, see our 3 May edition). The company's provision of showers, changing facilities and complementary towels results from research suggesting that people who are regular cyclists are healthier, taking one less sick day per year. "If you provide good facilities, a change in habits will follow," says Young. "We're trying to subtly influence how people think, not only at work but at home."

As well as more predictable initiatives such as follow-me printing, Young is keen to nurture an attitude to sustainability among staff through an 'interpretive learning trail' that explains the various initiatives in place. There's a staff garden situated just outside the breakfast area that is managed by a team of volunteer staff. There's also a green fingers and biodiversity club to engage people further with what the company believes are the largest habitat walls in any commercial building in the UK.

This is some project: staff will log flowers as they come up and there'll be prizes for the first flower from particular species. As plants come into flower, insects will start to arrive and these too will be logged. There's a three-year project with scientists to continue a dialogue.

"We know that business thrives on the transfer of information and that internal email is pretty old hat, so we've built in what we call a 'bump factor', where people can be encouraged to bump into each other. We do that in several ways, one of which is that we've punched staircases through the building to allow people to bump into each other.

And then there's the breakfast bar area, where staff are encouraged to congregate with the promise of free breakfasts. "We encourage people to stay and transfer knowledge here," says Young. "We're making it easier for staff to build relationships in a business that before was quite siloed."

Young, together with Lend Lease general manager Claudia Bastiani, emphasises a key aspect of the Triton Square fit-out that they believe will set it apart as the years roll on. "We know for certain that our business will change over time, so there's flexibility inherent in this building to make it a success when we need to adapt it in future," says Bastiani.

"All too many companies do a great fit-out and then they leave it at that. Go back six months later and it's a complete mess. Here, we realise that this fits us now, but might not do in two years when we may be involved n other projects. We're now having a constant dialogue about how the space is used.

"My job until November was all about managing the move," says Bastiani. "Now it's about the strategy we have that determines how we occupy the space. We're measuring how people are using the space through the Condeco room booking system, which tells us how many spaces are being used. Lots of culture change has naturally occurred - which means much more interaction, and adaptation to the way people have chosen to work.

"As well as measuring interactions through an analysis of our Condeco system, we're also in routine dialogue with business unit leaders and managers. Just this week, for example, we're carrying out an observational audit of how each desk and space is occupied."

With more research on user interactions coming from the company's Sydney and Melbourne offices, it will be interesting to watch the Triton Square office develop over time. The idea of a building that adapts organically to change within the business is not necessarily new, but the approach adopted by Lend Lease has all the hallmarks of a successful policy.