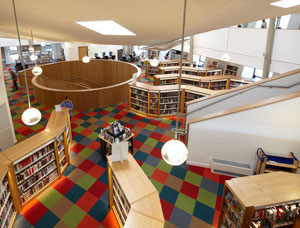 
Leaving the station puts you outside and in front of an entrance, one of two. In this case, you arrive at the café entrance directly opposite the open expanse of Canada Water basin, part of the old London docks.

Many of the Surrey and Rotherhithe-area docks and basins were named after faraway places from where imports were brought into London and British goods loaded up for export. In the library's case, the area was used to unload and house timber from Canada.

The new four-storey building sits on the old dock edge, facing out across the basin with its conservation and ecology zone of water plants and birds such as nesting swans and coots.

Imagine a three-sided triangle, turned upside down; the result is a building larger at the top than the bottom. This offers some shelter over the adjoining plaza - an open public space known as Deal Porter Plaza, in tribute to the workers who unloaded shipping in the dock's heyday.

The library was granted planning permission in 2007 and Southwark Council and development partner British Land Canada Quays started construction in June 2009. It opened to the public on 28 November last year, still with some workmen bustling around inside, says Richard Bareham, manager of the library and who had arrived the previous month.

Like many trained librarians, managing the library building comes with the territory, says Bareham, who was born in north London and received his history degree from the University of Wales in Lampeter, southeast Wales.

He then did a year of work in the library of the British Medical Association before doing a post-graduate diploma in library management at Manchester Polytechnic, as Manchester Metropolitan University was then called.

After managing libraries in Devon and Hampshire, he moved in 2006 to Dulwich in London to work for Southwark Council.

"The library was an old Edwardian building. I was trying to make a 19th-century structure perform to 21st-century standards. Taking over something like Canada Water is what many librarians would love to do," he says.

"It's also something that doesn't happen a lot these days," he says. "This place is state-of-the-art, with its heat-pumps, CCTV, electronic locks and so on."

Many boroughs are closing down libraries and trying to consolidate services in fewer but more central locations. In this day of electronic gadgetry including the increasing use of e-books, new libraries are hard to justify. Bareham estimates that the idea for Canada Water library originated eight years ago, just before the initial financial crash.

Such a long gestation period was due to intense public consultation. Bareham wonders if such a building as Canada Water Library would get built today, especially given the financial crunch affecting all local authorities. In fact, the new building replaces an older building that was across the road.

But then Canada Water and the plaza was envisaged as more than just a place to take out books on loan and that is how it is run, he explains. It's about being a meeting place for people to communicate, study, laugh, eat and be entertained in an environment that should make people feel good. The library is at the centre of a truly public space.

This is all the more important because the area is home to affluent City worker types in their modern flats living cheek-by-jowl with social housing tenants and people who have lived in the area for decades. The library has to have something for everyone, says Bareham.

The most obvious physical feature of the building is its unusual inverted pyramid design. But that makes the building's footprint very small in relation to its total internal floor-space of around 2,900 square metres (31,215 square feet).

The building has few environmental whistles and bells, although it has a sedum roof -
"It needs a weeding right now", says Bareham.

There is also a ground-source heat pump drawing water from around 50 metres down. The pump, run in conjunction with an array of roof-top solar panels, accounts for around 20 per cent of the library's hot water needs.

The library does have a central building management system whose single computer terminal is located in the small IT data room. Management of the main functions are handled by Inviron, which has a dedicated environmental manager with whom Bareham says he has built up a good relationship, essential for running the buildings as efficiently as possible.

"Inviron was the main sub-contractor for electrical and engineering plant for the library from the builder ISG, so it is logical that its maintenance arm had the FM maintenance," says Bareham.

In any new building, there will be initial running-in issues with systems, but nothing major has happened so far. Just how well the structure is run won't become clear until at least the end of the year, when one annual cycle has been completed.

The majority of windows open and the building has no air conditioning, says Bareham. Chilled beams work well, but for the moment, maximum efficiency means windows are not opened as much as some people might wish.


Once upon a time...
The public's experience starts either through the café entrance or the opposite entrance directly into the small reception. Putting the café on the ground floor with a direct entrance aims to encourage use by non-library visitors to make the concession more financially attractive.

Cafés are natural meeting places and draw people in, including many local workers who come in for lunch, or a coffee before work. The building's free WiFi adds to this attraction, says Bareham.

The small reception area has only a few books placed around as a taster, to ensure people who may not know they have come into a library are quickly aware of it. Several 'lobby library' computers are available on high tables - no sitting - for commuters to check their e-mails.
The real work starts on the first floor, up the stairs in the building's centrepiece wood-panelled circular stairwell. The wood is oak veneer on plasterboard - a nod in the direction of thrift - but is nonetheless effective in giving the impression of solidity.

On the first floor, the library layout is seen for the first time. It's all open plan, but the rows of shelves are zig-zagged, giving an appearance of more going on and making the layout appear more creative. Plasma-screen TVs are posted on several walls, mostly tuned in at low volume
to news channels.

During FM World's late morning visit, a children's group in the kids' area was well underway, noticeable by shouts of laughter from time to time. Even so, such noise is deadened to a large degree by sound baffles on the ceiling, as well as the ceiling shape itself, which dips down in some places, says Bareham.

Lounge chairs and small seating areas are set around the perimeter of the first floor to take advantage of the views across Canada Water Basin and other directions. The large windows allow a lot of natural light to penetrate the shelving areas.

The 20 librarians and administration staff occupy an area off the main floor. There is some hot-desking, says Bareham, but because there are so few people anyway, people tend to gravitate to a particular desk, unofficially recognised as theirs. He says the system works well enough as long a people leave the desk suitably uncluttered for someone else to park themselves there if needed.

The second floor is basically a gallery overlooking the first floor. A continuous study table with seating for nearly 50 people flows around the edge of its internal perimeter. Off the rear of
the gallery are several large, flexible-sized meeting rooms, an important part of the library's financial strategy.

The meeting rooms and 'Cultural Space' - off the reception area on the ground floor - are rented out for business meetings, community groups and other organisations. This is entirely outsourced to The Albany, a theatre group.

"It's a weight off my shoulders," says Bareham.

All meeting rooms have views across the basin and are IT-ready for audio-visual hookups. One 'learning room' has 15 PCs for use by businesses to train employees.

The library has use of the facilities as well as the Cultural Space, a 150-seat, removable theatre with full stage lighting. Lectures, plays, musical performances and regular comedy acts are put on here for an admission charge, part of which, as with the meeting rooms, goes to Canada Water Library.

The Cultural Space also has large double doors that open out on to the plaza, making a larger space that can be used for events.

Just how well the building performs mechanically will only be known in a year or so when more operational data is collected and analysed by Inviron. An understanding of how well it performs for the public is becoming clearer as the months go by. The footfall target for the first year is 250,000, says Bareham.

"In May, we had 48,000 people through the doors. It was manic in the build-up to school exams. I've no doubt that we'll easily exceed our footfall target for the year," he says. "The trick is to keep that ball rolling."

Gone are the days of libraries being hush-hush places, although people will generally speak in
low voices, says Bareham. But children - one of the main target audiences of most libraries -
are not so constrained, so allowances are made. This invariably creates a noise issue from time to time, even in the best-designed, most soundproof environments.

Bareham is also conscious of libraries being less prescriptive than before. There are no big signs telling visitors what to do. In fact, coffee is allowed among the bookshelves, at desks and in study areas, as long as it's in a cup with a lid.

So accidents do happen, he says. Okay, so the carpet-cleaning bill is slightly higher, but that's the price for having a more friendly, open community library. Bareham is happy to pay the extra.