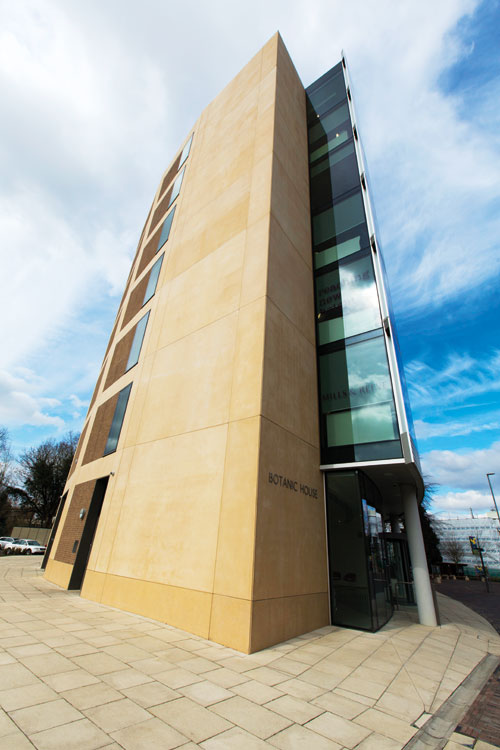 Like their London counterparts, the city planners of Cambridge wanted to ensure that when the railways came, they didn't come through the centre of the city.


So today, when you exit Cambridge station, the city centre itself is still a good mile's walk away.

But as you make that walk, you soon become aware of Botanic House, as of 2013 the tallest building in the city and the first speculative office development in Cambridge for over 20 years. Its immediately distinctive lens-like frontage strikes you as you reach the junction of Station Road and Hills Road.

Botanic House has been built in what may soon come to be referred to as Cambridge's 'professional quarter', an area expected to see further commercial, retail and residential space.

Earlier this year, after more than 23 years in Francis House just 100 metres away, national full service law firm Mills & Reeve relocated its Cambridge office to the newly iconic seven-storey building (named after Cambridge University's Botanic Garden, over which the building affords unique new views). The company has leased the entire 52,000 square feet and has sub-let its fourth floor to accountants KPMG.

Mills & Reeve has spent 10 years in the Sunday Times Best 100 Companies to work for, the only law firm to have done so. It has six offices in the UK and of its national workforce of 805 people, 303 are now based at Botanic House.

The move came as a result of the lease on its former offices at Francis House falling due up in 2014. Pace Investments, which had recently become Mills & Reeve's landlords, informed the company that they were building Botanic House on the site of an old, two-storey block of the same name.

"We could have stayed at Francis House, but quite quickly we decided it would be better to move if there was an appropriate building," said Mills & Reeve's head of facilities, Nick Brook. 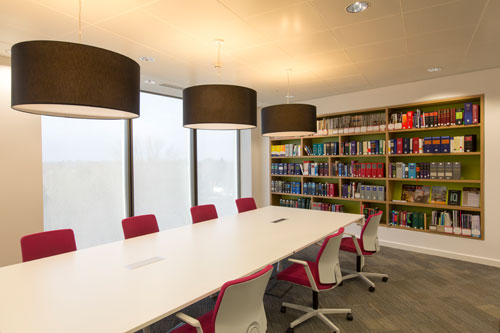 The company decided to use the move as an opportunity to introduce some major cultural changes to its working practice, as Brook explains: "Francis House was a three storey building and most of our business support people were based on the ground floor in meeting rooms, while our fee-earning teams were on the first and second floors together with a few embedded business support people. The offices were cellular, and we wanted to become a completely open-plan firm."

One of the things that came out of pre-move discussions was the idea of having business support embedded on the floors, rather than kept separate.

"We felt this would help fee-earning and support teams interact more," says Brook. "And it's worked. On the first day here, we had people meeting each other in the kitchen that hadn't ever met before."

There was also a need to consider filing, a key operational issue in legal firms. Says Brook: "Had we moved everything we had over from Francis House, we'd have had to dedicate an entire floor to filing. We couldn't let that happen. As part of the move, we reduced our filing from 11 linear metres per desk to 8 linear metres. We then backed that up with 'dump the junk' days and the appointment of 'file champions' to encourage teams to reduce space used."

"We had a few exceptional cases - people who'd amassed 30 to 40 linear metres of storage at Francis House - but I think when they let go of their clutter, they found it quite liberating."

Brook also took the opportunity of cutting the number of desks. "I and the other heads and directors of support functions don't have a desk here. Instead, we book rooms a week in advance as required or sit in available places throughout the business. Interaction is much better, because people come and say things that they wouldn't necessarily phone or email you about, since you are there. On the whole, it's been great - although you do need to remember to sit with your own team every now and again. I make sure one of my week days is spent sitting with the FM or team leader here."

The design of Botanic House has allowed Mills & Reeve to have two receptions - one on the ground floor and one on the sixth floor, where all of the client meeting rooms are now housed.

Says Brook: "At Francis House, all our meeting rooms were on the ground floor. They were both client and internal meeting rooms, so quite often you'd get moved out because a client was coming in. We didn't have a goods-in down there either, so reception doubled as the goods-in area. We'd end up with a client coming through and picking their way through a stack of DHL boxes - it just didn't look the part."

The client meeting rooms at Botanic House are a big step up, with flexible partitions that allow expansion to accommodate up to 50 people in a seminar style. The remaining floors have a variety of break-out spaces for internal meetings, whether formal or informal.

Goods-in for the whole building, including KPMG, is on the ground floor, but located separately to reception. And there's a dedicated reprographics area on the third floor, where the facilities manager and team leader are based.

Elsewhere, the design of the building has liberated workers from their desks through building-wide wi-fi and there's been a new waste management ethos introduced as well.
"We don't have rubbish bins at desks," says Brook. "Instead, there are central recycling points on each floor. That said, workers have been told that if they really want one, they can bring their own bin in  just so long as they are responsible for disposing of its contents because our cleaners won't be."

It's an example that, despite the many cultural changes introduced to the workforce at Botanic House, Mills & Reeve has been careful to ensure individuals retain as much freedom as possible.

"We have ways in which we want people to work and behave, ultimately because we're a legal partnership and legal partnerships are quite different to other companies. A lot of consultation needs to happen and that can create challenges," says Brook."

The seating arrangements at Botanic House are a case in point. "Once we decided where the leaders of the practice areas were going to be, we got them to tell us where the other members of their teams would sit, rather than decide that ourselves. For some, that was the hardest thing they'd ever done."

Because of the move and how FM now operates, Botanic House is seen by Brook as an exemplar of what the facilities department can offer in general.

"People from our other offices visit and see what's happened here and I think the facility sells itself. We've had really positive feedback. I think FM being embedded in the office on the fee-earning floors is helping change the mindset some may have had about FM and what we've done here we'd like to roll out to other offices as and when we can." 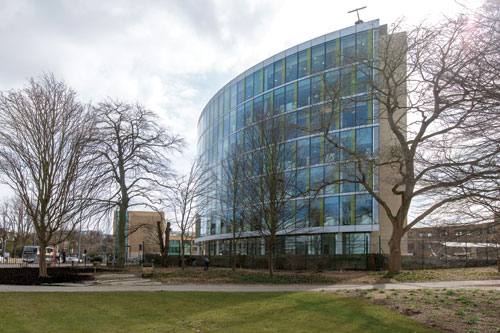 Brook is keen to see wider adoption of Botanic House sustainability initiatives such as on-site composting, the elimination of paper hand towels and plumbed-in mineral water, across the Mills & Reeve estate. A senior partner on the board is responsible for corporate responsibility and sustainability, although, in practice, Brook takes on the sustainability mantel, with the majority of sustainability issues primary influence through facilities and purchasing services.

With the move still fresh - the company relocated in February - it's early days in terms of assessing service levels. "It's a question of working out whether what we're doing now is enough for the business," says Brook. "We've had a couple of niggles, but I'm meeting every couple of weeks with the facilities people to see what issues we need to address."

The next stage includes a '100 days in' report to look at how the hot-desking situation is working. There will be a post-occupancy survey, probably in September.

Brook is naturally keen to take what's been learned in terms of support team set-up and introduce it into the firm's other offices, where it is sensible to do so.

"There's no point in seeing each office as its own silo," says Brook, "and, certainly, we in FM have been trying to ensure that whichever site you're in, functions such as logging on to a computer, the way a phone operates, posting letters and booking meeting rooms are all the same whatever the location. It should all be the same single procedure."

Away from the office move, Brook controls a small group of outsourced service providers. One of Brook's current projects is to roll out a national mechanical and electrical contract across the business's six offices. Lusso provides the on-site catering for Mills & Reeve's larger offices in Birmingham, Norwich and Cambridge. When it proved difficult to find a single national provider of archiving services, Brook decided to work with local providers in each location.

"The speed of recovery of documents is important - we expect that we can get something back from the archiving contractor within an hour," he says.

Being in the Sunday Times Best 100 Companies firms to work for is quite an accolade. How important does Brook think FM is to retaining that particular status?

"It's probably increased over time. I think more people are becoming aware of FM around our sites. Each time we've had a new office, or an office move, people from our other offices have looked enviously on. And here, this project has been much more than just an office move - it's allowed us to introduce significant cultural change into the firm."
Also filed in:
Topics
Features
Content
Features
Case Studies