Get a move on

Web-based applications are making office moves easier for FMs. Gary Watkins explains how to get the best out of them.

FM software is usually thought of as an asset management tool.


Increasingly, though, it's being used to manage space. The traditional approach would have seen a facilities manager or office administrator requesting changes to a layout. This would be passed to the moves team that would generate drawings. Whether the process was manual or used technology, it was usually centralised.

For FMs, this can mean an almost constant re-planning and allocation of office space.

The churn rate (the percentage of staff moved during a year) for a typical office can be as
high as 40 or 50 per cent. The complexity of office churn can be reduced by adopting universal space planning standards, standardising on furniture layouts (so that you move people not desks) and adopting IT systems that allow people to log in to phones and servers from any location. However, the cost is still significant, and FMs are increasingly using software to manage both internal moves and relocations.

The second trend is the rise of web applications, replacing or complementing conventional, dedicated software. According to Gary Watkins, managing director of Service Works
Group, the significance of web apps is the change of user and the change in roles: "The graphical, familiar web interface opens up space planning and move management to a much wider audience," he says. 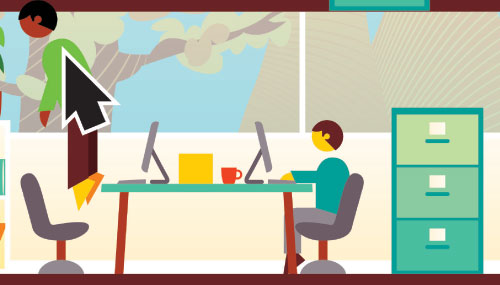 Now an administrator (or even an end user) can look at different space options and scenarios. If the changes are straightforward, such as moving people on a floor, they can often be authorised without the involvement of specialists.

"Web applications put power into the hands of those who use and need the data," says Watkins. For example, conventional systems are not always kept up to date with the reality on the ground because there are too many steps involved to correct the data. Show someone a floorplan in a web browser and it's easy to correct errors there and then.

A system, such as QFM Space from Service Works Group, allows the user to view both a database and drawings via the web interface. It's integrated with AutoCAD so that drawings can be published straight into the system, but users don't need AutoCAD to run it.

Moving people or assets is a drag-and-drop operation, much like changing your seat on an airline reservation system, or booking for the theatre.

For those worried that this puts too much power in the hands of people who may not understand the bigger picture, there are rules that can be set. These may restrict the size of moves an administrator can carry out, prevent them moving someone to another floor or
into a particular type of office, for example.

The rules can be quite sophisticated, to address health and safety requirements, compliance and technology issues. Users of QFM Space, for example, can identify particular individuals who may need to be in certain locations, such as a head of department, a fire marshall or even an 'approved person', performing a controlled function under the Financial Services and Markets Act. The system will then warn if the user tries to move that person off a particular floor, out of an area, or separate them from a piece of specialised kit or infrastructure, such as back-up power.

Status controls will allow an individual to plan moves or to update occupancy, but a request to execute a move will usually require validation. All related communications are automated, with the system dispatching all the relevant emails at each stage of the process.

Watkins says it's not just office moves, but also strategic accommodation planning that can benefit from FM web applications: "Organisations need to understand their use of and requirements for space before acquisition or disposal. They need to be able to answer the question, 'Do I really need 200,000 square feet?'." According to Watkins, many astute companies are looking at their space-use on a monthly basis, "ensuring they're not wasting it or, conversely, have insufficient space for future plans. In some organisations, there's virtually an internal market for space."

An application such as QFM Space can be used to assess the suitability of a new building or the feasibility of a particular move. The application can produce blocking and stacking plans to help determine the most efficient 'fit' for teams or departments with the space available. Users can also carry out scenario planning across different floors and buildings, as well as run audits to see how much space is available.

All these activities are made easier and more accessible because they run on familiar
web-browser technology.

When it comes to the actual move, systems such as QFM Space can produce all the documentation necessary for a successful and efficient operation, whether it's shifting a team to another floor or a major relocation. This will include spreadsheets to manage the move, drawings showing 'from' and 'to' locations and labels for crates and desks. The system can also host post-move surveys.

The use of web applications to manage space and moves is likely to accelerate as organisations opt for more responsive workplaces. According to SWG's Watkins, various forms of flexible working are now being considered by organisations that previously wouldn't have considered it. These include a variation on hot-desking, with say 20 people allocated to 10 desks in a 'work zone'.

Making the use of space and the cost of moving people and assets around it more transparent can significantly demonstrate the excellent value that facilities managers bring to organisations.
Also filed in:
Topics
Features
Content
Features