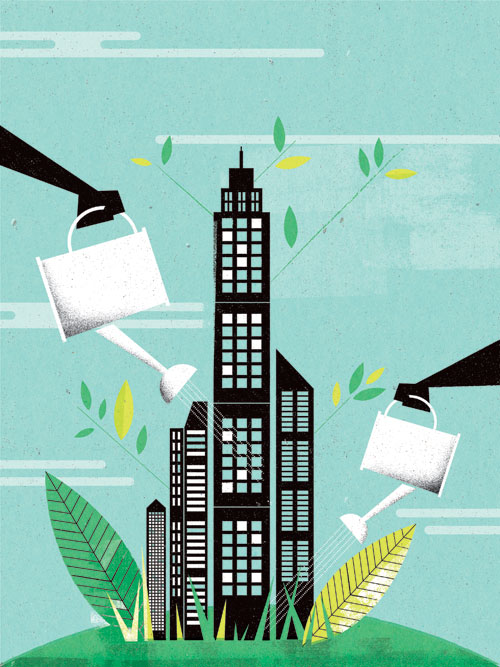 Andrew Cooper digs down into the available sources of funding for energy conservation measures and finds surprisingly fertile ground.

Making energy savings has always been an effective method of reducing overheads for a business.


However, many businesses are unaware of the ability to now convert those energy savings into a means of raising finance.

This is becoming an increasingly viable option as years of recession and austerity has had its impact on the money supply. There are no shortage of stories about banks and other financial institutions refusing to lend, or requiring such levels of surety and interest that borrowing is made difficult or even impossible.

At the same time, we are all aware of the challenges faced by the public sector in reducing its running costs.

Consequently many businesses and public sector bodies face difficult decisions about how to prioritise investment. A business may have to decide between purchasing new plant and machinery - to allow it to increase its manufacturing output - or replacing aged plant and machinery associated with building services such as heating, ventilation, cooling and lighting. A local authority or hospital trust may have to choose between providing public services or replacing inefficient or dilapidated building services.

However, this process of prioritisation - discounting one investment in favour of another, may not always be necessary if an investment in property leads to energy savings, as these savings can be used to generate new finance.

This then releases limited cash reserves or traditional borrowing for other purposes.
Energy has a value which, in its simplest form, is equal to the amount paid to a utility company to supply it. Reducing energy consumption lowers energy costs and it is these savings which can be used to redeem finance. In addition, replacing aging building services with modern more efficient models and systems helps to reduce operational costs, leading to further savings, and helps to provide a better and more productive working environment.

The cost of energy is set to increase so these financial savings are likely to grow over time. Lord Rupert Redesdale, a Liberal Democrat peer and chief executive of the Energy Managers Association, says companies often fail to look at their energy costs outside of a year's worth of bills. "But they need to start taking the view that year-on-year energy prices are set to rise and will certainly outstrip inflation."

Sources of funding
The easiest method of financing energy conservation measures is usually through self-funding using cash funds. But where this is not possible or feasible, there are four additional mainstream mechanisms for securing external funding. These are: 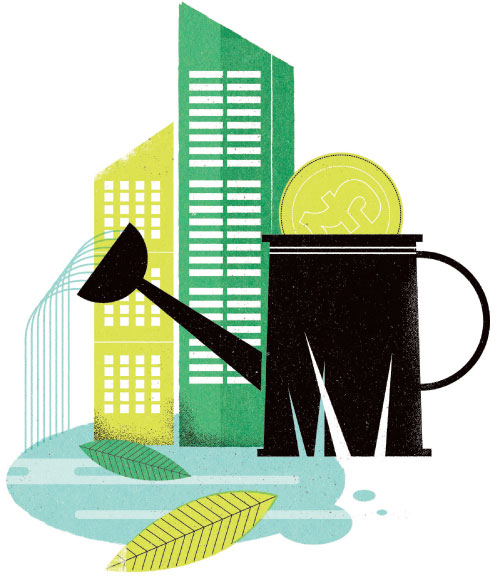 Grant or subsidy?
Grant funding tends to be periodic and limited in availability. Examples include the joint government and BRE Clear Skies Project in 2004, and BRE's Low Carbon Buildings Programme, which expired in 2011.
However, subsidy schemes were introduced to encourage long-term investment in low or zero-carbon technologies, and include the government's Feed-in-Tariff (FiT) and the Renewable Heat Incentive (RHI). The concept is simple; eligible technologies can apply for a subsidy for each kWh of energy produced. This helps reduce the payback period of the investment, and improve the financial return.

The FiT was so successful in increasing investment in certain technologies, such as photovoltaic (PV) panels, that the government was forced to lower the subsidy in December 2011 leading to several legal challenges.
Although the FiT has reduced, so too has the cost of the technology - particularly PV panels, so payback periods remain reasonably stable. This subsidy can be used to help repay traditional finance, or there are companies that will entirely finance the cost of this technology in return for the subsidy, leaving the energy generated for the benefit of the occupants of the building or land upon which the technology is situated.


Financing based on actual or guaranteed energy savings
Financing based on actual or guaranteed energy savings is commonly known as energy performance contracting (EPC). The Energy Managers Association, which is seeking to develop guidance and standards for energy performance contracts in the UK, uses the acronym EnPC to avoid confusion with Energy Performance Certificates. An EnPC is an integrated programme of energy saving measures to deliver guaranteed savings. The model is traditionally a tri-party 'partnership' between a financier, an Energy Services Company (ESCo), and the beneficiary of the energy conservation measures.

The ESCo prepares an investment grade audit to accurately determine what energy savings could be made and recommends improvements works. The financier, which could be a bank or other financial institution or vehicle such as LEEF (see below) or SALIX, a not-for-profit company partially funded by the Department for Energy & Climate Change (DECC), pays for the energy conservation measures.

These are undertaken by the ESCo, which in turn guarantees or shares the energy savings depending on the contract model used, and the loan is subsequently repaid from these savings. Well known FM companies often act as the ESCo.

The process is made transparent and auditable through adopting the International Performance Measurement & Verification Protocol (IPMVP), ensuring that a mechanism exists in the event of a dispute for third party determination by a qualified professional. A key aspect of an EnPC is the 'partnership concept' with all parties working together to facilitate targeted reductions in energy consumption.

A possible barrier to the take up of an EnPC in the UK , particularly in the public sector, has been to do with the way in which the assets are accounted for and whether they are 'on or off the balance sheet', impacting debt levels. It is now possible to deliver an EnPC as a service with assets, comprising of the physical energy conservation measures, held off the balance sheet of the beneficiary.

In other words, the beneficiary of an EnPC is buying an outcome rather than physical assets. In this case the outcome is a reduction in energy bills.


Financing based on predicted energy savings
The coalition government promised to be "the greenest government ever", and central to this pledge is the Green Deal. The Green Deal is a 'pay as you save' scheme based on the concept of Energy Performance Contracting.

Central to this arrangement is the 'Golden Rule', which states that the cost of installing and financing these measures must not exceed the saving in energy costs. However, unlike Energy Performance Contracting, these savings are not guaranteed, making the Green Deal a financial scheme based on predicted energy savings. A further differentiator is that repayment of finance is through the utility meter - so the loan has the potential to stay with the building.

It is not yet possible to secure finance for commercial properties under the Green Deal, but the scheme is now applicable to the commercial sector and therefore finance is likely to become available in due course.
The Green Deal Finance Company (TGDFC), a not-for-profit organisation, has set its initial interest rate at 6.96 per cent and these loans can be for a period of up to 25 years. Compared to other forms of long-term borrowing, such as a mortgage, these rates are high, but they are competitive when set against shorter term unsecured loan rates.

Adam Hewson, a director of ReEnergise, one of the 22 original Green Deal pioneers, advises that private sector finance companies are free to set their own rates, but although this is unlikely to be less than those offered by TGDFC because of the significant government subsidy, there would likely be much greater flexibility in the types of deal available.

While there are some who feel the Green Deal's traction in the commercial sector is likely to be limited, when fully available, it could suit many small and medium enterprises. Larger organisations are likely to consider alternative financial sources, such as their own banking relationships, or dedicated funds such as the London Energy Efficiency Fund (LEEF).

LEEF finance is available to public sector organisations or private companies undertaking improvements to existing buildings in London. Loans can be against the predicted energy savings or used to fund an EnPC. Interest rates are currently more competitive than proposed under the Green Deal, determined by the financial strength of the applicant and the project, but there is a greater degree of due diligence required to calculate energy savings using the IPMVP. Unlike the Green Deal loans may be on a corporate basis against a company's balance sheet, or alternatively, off-balance-sheet structures are available.


Financing backed by specific assets
In simple terms, financing of specific assets to achieve energy savings is a loan made to a company or individual to buy an asset, such as a new boiler or an air handling unit. In turn, there are different types of financing agreements, such as straightforward asset finance or hire purchase agreements.

In this case, savings are not guaranteed and the financier has no real interest in energy savings, merely the ability of the applicant to meet the terms of the agreement.

However, while this process of purchasing new equipment and plant can be detached from the concept of energy savings, if the savings are greater than the repayments then a sound business case can be made, meaning the investment is more likely.

It seems almost too good to be true, that finance can be raised and paid for through energy savings resulting in little real term cost to beneficiaries. Nevertheless these mechanisms do exist, and in many cases are tried, tested and proven - both here in the UK and abroad. As such, they are increasingly likely to be considered alongside other forms of finance, which means FMs could form a central part of the viability of any loan in helping to identify efficiencies and realise savings.