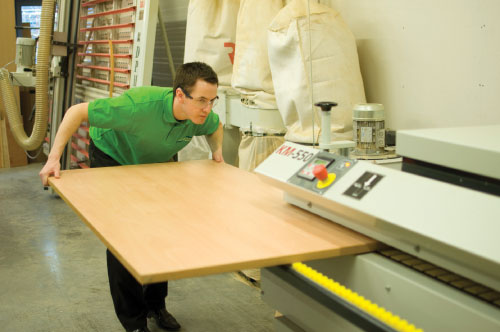 The London Borough of Hammersmith and Fulham needed to generate space for additional staff. Cutting existing desks to size offered an effective solution that fitted the authority's limited budget.

When the London Borough of Hammersmith and Fulham decided to replace its existing stock of large desks, it was conscious that the solution needed to be cost-effective.


Rather than purchasing new furniture, 215 desks have been remodelled over a period of one year, resulting in a cost saving of almost £20,000.

The London Borough of Hammersmith and Fulham is undergoing a transformation as it adapts to a tri-borough system, working with neighbouring boroughs. As the number of council-owned properties is reduced, facilities staff need to maximise the use of available space to fit more staff and desks into the existing office footprint.

Initiatives such as hot-desking and an increase in the number of staff working from home have been implemented, but an immediate solution has been to reduce the size of office desks.

Brigette Chambers, Space planning manager of London Borough of Hammersmith & Fulham explains: "We have about 26 Category One buildings that house the main offices and around 244 properties elsewhere. However, we are working to rationalise our use of space and, as a result, we are having to find space in our civic offices for more people."


Driver
Hammersmith Town Hall also faces the challenge of housing an additional 181 employees after an extension project will see staff numbers rise from 643 to 748. Across five office sites, a total of 485 extra staff needto be accommodated.

Chambers says that the ratio of desks per person now takes sickness into account and the fact that more people are working from home; seven desks have been provided for every 10 staff. This, coupled with a clear desk policy and lockers that have replaced pedestals, the workplace has become more adaptable. However, even with these moves, more workspaces need to be provided.

Chambers says: "We were running out of space. Originally, people had large, L-shaped desks, because computers were so big. Now they have flat screens so we can use smaller, straight desks - 1,400 x 800mm instead of 1,800 x 1,200mm. Our old desks were still in good condition, so instead of throwing them away, we thought maybe we could cut them down and use them.

"Cost was extremely important to us - we are trying to be careful with public money. We could go out and spend thousands on new desks and make it all look pretty; but it's public money, so if we can re-use, then why not?" 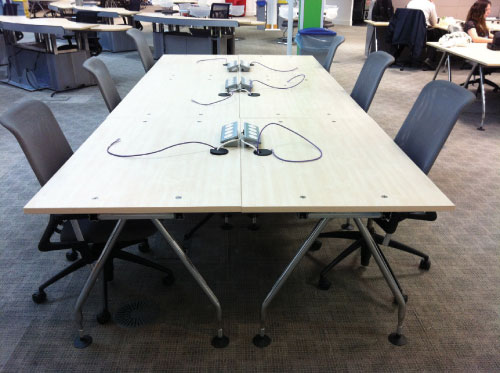 Solution
Once the borough had decided to explore re-use, it approached Premier Sustain. Chambers explained: "They took three styles of desk as a trial, cut them down to size and finished the edges off. The edging was perfect and they included the cable ports for wiring, so we then sent them 100 desks to work on. "Having a storage area was helpful to the process, since it meant that staff were not left without desks to work from as remodelling took place.

The authority already had one unstaffed floor in one of its buildings, which was being used as storage for desks, so Premier Sustain audited the items and started working on reducing them. Chambers added: "It was like a domino effect - as people moved out, we would take those desks for remodelling, and so on. The only downside is that you can't always get the same finish. One might be oak and another beech; but it is still a good quality desk that people can work at."


Quality assurance
The desks are remodelled at Premier Sustain's workshop in Edmonton, London, by two full-time staff. Each item is given a warranty, typically for two years The quality checks in place match those applied to new items; they all undergo visual inspections, weight-bearing and other testing, to make sure that they are fit for purpose. Workers look at the guidelines for new items and try and test in the same way, and also perform random spot checks with more rigorous testing. Once they've passed the inspection, they get their warranty sticker of record. In addition to the actual remodelling, off-cuts are manufactured into coffee tables and bookcases.

Premier Sustain also records information, such as the colour, condition and measurements of items, and manages storage sites for clients, of which there are predominantly three types: large, corporate organisations that need a flexible resource to support frequent change; clients who have to store items for historical reasons; and those undergoing a specific major project change, such as a merger. Organisations  for which the firm has provided this desk remodelling include Vodafone, ITV, Tesco Stores, Transport for London, Mid Essex Hospital, Origin Housing, BBC, The Cabinet Office and Hampshire Constabulary.


Environmental benefits
With 215 desks already remodelled, and an associated landfill diversion of 8.6 tonnes and 23.2 tonnes of carbon equivalent saved, work is still underway for Hammersmith and Fulham.

An additional 300 desks were expected to be processed throughout 2012, adding to the environmental and cost-savings accrued by Hammersmith and Fulham, while Premier Sustain has also disposed of unwanted pedestal, saving 11.9 tonnes of CO2 equivalent.