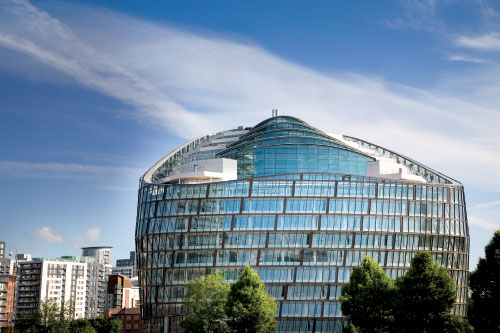 The Co-operative Group's much heralded headquarters at One Angel Square in Manchester benefited from FM's involvement in its design from inception - a decision that continues to pay dividends, writes Martin Read.

Over the past few years, the Co-operative Group has been something of a star performer in FM circles.


Under development since 2008, the group's FM strategy has won a plethora of awards, while Kate Morris-Bates, now head of facilities management shared services, was highly commended in the Facilities Manager of the Year category and nominated as one of the Rising Stars of FM in 2012.

The Facilities Management Support Services (FMSS) division has contributed to these achievements; its customer satisfaction surveys and supplier management frameworks have changed how all within the group appreciate FM.

In fact, the team now operates to a regularly reviewed three-year plan; it's treated at board level as a key part of the group's management of operational risk.

It's quite a positive story in itself - yet all along, everything was leading up to one key event - relocation of the organisation's head office to purpose-built premises in Manchester city centre.

Crucial to this story are two key elements: first, the sheer scale of the project - more than 3,000 people from a range of Co-operative Group buildings were steadily prepared for their dramatically new working environment over a three year period; and, second, the facilities team's pivotal involvement both in researching those workers' requirements and in the subsequent final design of the structure.

Opened on schedule in February, One Angel Square forms the first phase of NOMA, a wider development for the Group's 20-acre complex and land holdings in Manchester's city centre.

When complete, this redevelopment scheme, covering over four million square feet, will be its own new neigbourhood, comprising offices, homes, shops, hotels, restaurants, cafés and a raft of new outdoor squares and spaces.

For now, the building (referred to internally as a 'support centre', not 'headquarters' to emphasise its service delivery role within the group) stands proud of its surroundings. The three-sided, 15-storey structure has a double-skin façade and an extraodinary atrium that spans its full height. In fact, however large the building looks from the outside, the sheer scale of the atrium makes the building feel even bigger when you're inside it.

As we tour the building, the team talk like proud parents, tripping over themselves to point out feature after feature. There's a sense of ownership and pride in the finished building that affirms just how important the FMSS team has been in the story of this building's development. 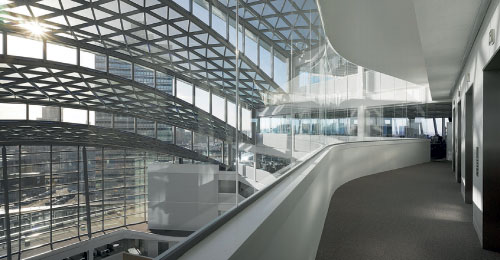 BREAAM me up
The atrium is key to enabling the natural heating, cooling and lighting throughout the building. Louvres at the top of the facade open to allow warmed air trapped between its inner and outer skins to rise up and out of the building.

The building achieved the highest recorded BREEAM score, making it one of the most sustainable large buildings in the world.

Other features contributing to the BREAMM 'Outstanding' rating include the recycling of heat generated from IT units to warm the building, the use of Otis Gen2 lifts (that create their own energy when used) and both greywater and rainwater recycling systems.

The building's combined heat and power (CHP) system is powered by rapeseed oil grown on The Co-operative's own farms in Northamptonshire. This excess energy - up to 80 per cent of what is currently produced - will ultimately be supplied out to the wider NOMA development. The group expects that the building's design will cut in half the amount of energy consumed when compared to consumption across the various buildings at which its corporate teams worked until they transferred across.

The building's entire ventilation strategy is driven by CO2 levels. Maximum occupancy is 3,500. But even if only 1,000 people are in occupation, the aim is to maintain a 500-parts per million CO2 level in the building. Sensors in every room and around the floor space monitor temperature, humidity and carbon dioxide. The lighting PIRs pick up on the level of occupation, then hand that information over to the CO2 system which constantly monitors those two levels, introducing new air as occupancy goes up.


Cultural fit
With so many people coming from so many different buildings, and bringing their own particular ways of working, the project has proved to be a classic case of managing cultural change - albeit on a grand scale.

Examples of this change, which continues to be managed by the FM team, are rife. The room-booking system, while principally open-plan (there are 168 rooms in the building) is tightly controlled. No more casual block-booking, and room use is monitored closely to see that the right rooms are booked for the needs of those booking. Abuse the system, perhaps by booking an eight-person room and only having a two-person meeting, and you may be quietly asked to move.

Says Morris-Bates: "It's really important that we do this stuff in the nicest possible way. It's a culturtal change that everyone has to buy into, so at times, we have to be quite strict."

"To get the full flexibility of the building it must be utilised efficiently," says Crawshaw. "People are getting to like it now that they understand it."

The move to flexible working has been comprehensive. Chairs, computers and VDUs are the same specification across all floors. If left unattended for more than an hour, users are logged out of the system and obliged to log back in.

"We worked with our cleaning contractors to come up with a plan for how internal atrium cleaning would work." This, bear in mind, was more than three years ago, prior to construction. "When the initial design concept for the roof was shown to us, we said 'that looks spectacular - but how do we clean it?" Thus, FM was able to head off the kind of post-construction operational issue that can be all too prevalent.

Crawshaw proudly points to the cleaners' store on the eighth floor. "You wouldn't believe the conversations we had about my insistence on having a cleaners' store; we had architects asking 'well, what would a cleaner need that for?' That's the importance of having FM involved in the design of the building. Because they miss out those things that are invisible and that everyone else would just walk past."

Migration champions were assigned to introduce a paper-reduction programme, help shift mindsets and reduce print volumes. In the three years prior to opening, the amount of printed material generated across the corporate estates was reduced by 80 per cent. This, together with reduced paper storage requirement saved the equivalent of two whole floors' of office space - which, at £20 million per floor, represents a sizeable sum.

Crawshaw admits that even the MFPs that were finally specified were positioned to give people pause for thought before deciding to print. A document store, centrally managed by Swisspost, includes an archiving process that further dampens down the demand for print. 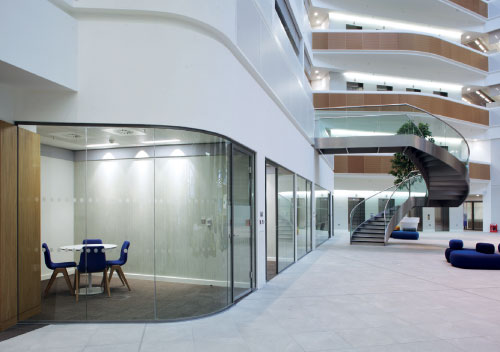 Says Morris-Bates: "We're engendering a one-team ethos across all of our service partners. That's been a major cultural change, but now when we conduct supplier tendering we assess on client fit too."


Guardian angel?
FM, says the team, is regarded as "the guardian of One Angel Square" in terms of the services provided within it. The FM team is "the gatekeeper of events, the 'go-to' point of contact for any building related requests, queries, suggestions for improvement". The team's introduction of building occupancy forums has fostered engagement and changed mindsets.
(Says Morris-Bates, "We don't believe we have a monopoly on good ideas.")

Cleaning, the function that uses the most contract staff, has moved from traditional out-of-hours provision to day-time cleaning, says Crawshaw. "Because our cleaners are visible, the perception of how clean the building is has improved."

Vacuuming is done in the early hours and again late in the evening to reduce its impact on workers, but desk, bathroom and kitchen cleaning is conducted in the day.

The building was also designed with separate contractors' space, allowing each operative their own locker space and a 'retreat' from the shop floor. "We wanted to make sure they felt comfortable," says Crawshaw, "As far as I'm concerned they're part of my team. When they've got a badge on they're never off duty, so it's nice to be able for them to have an area of their own."


Fit-out funtions
Each of the main floors is split into three work-style zones, 'collaborate', 'concentrate' and 'create'. Fit-out and furnishings reflect these differing requirements, with a range of contemporary furnishings from noise-cancelling booths to benches and break-out areas.

These three working areas are the company's attempt to ensure that no matter whatever
a colleague's preferred work style, there should be something for everyone. The café area on the ground floor, with its airport lounge vibe, has proved a surprisingly popular new 'drop-in' location for getting work done. Says Crawshaw: "It's about making sure you give people the options."

The fit-out has a local as well as a sustainable theme; high-definition photographic prints highlight the company's past as well as celebrating other iconic images from Manchester's past and present.

There remains plenty of work still to do. As usage patterns develop, the team will assess
how the new restaurant and café catering offering is performing (it, too, was planned-in well before the building's construction started), while the atrium, which wasn't initially planned to accommodate events, now does so.

Flexible working remains a work in progress, says Morris-Bates. "We're trying to embed the principle that people have to be flexible, for the overall benefit of everyone in the building."
According to Dunn: "We'll be rolling out the design principles in place here across our other buildings where possible, but that will happen in smaller steps."

For now, One Angel Square stands as testimony to what can truly be achieved, in both productivity and sustainability terms, when FM gets to take the lead role.
Also filed in:
Topics
Features
Content
Features
Case Studies
Workplace services
Sectors
Public Sector
Catering
Manned Guarding / Security