Last year, BT bought out its FM services provider Monteray and, in September 2012, launched BT Facilities Services Ltd. One year on, BTFS is not only thriving, but aims to offer facilities services to other organisations.

The BT Group estate managed by BT Facilities Services (BTFS) is vast, complex and, with the recent addition of Ireland to its portfolio, expanding.


The estate now encompasses around 7,500 buildings, with the bulk (around 5,500) of telephone exchanges throughout the country utilised as welfare areas for BT engineers, or - stripped of their telecommunications wiring
- housing offices and call centres.

Being a telecommunications company, BT properties include cavernous call centres such as those located in Gosforth and Warrington, the iconic BT Tower in London and the Goonhilly UK satellite ground station in the south-west. BT's portfolio also encompasses its Global Research and Development headquarters at Adastral Park near Ipswich, where BTFS also manages some buildings sublet to other high tech companies.

As Neil Edmond, operations director for BTFS, describes it: "We've had conversations with a few organisations that have acknowledged we are the only truly national FM provider in the UK, and the only truly integrated one in that we do everything."


Going solo
BT's decision to end its 12-year relationship with Monteray, which had previously run BT's enormous UK-wide estate, caused something of a stir last year, with many surprised that such a large organisation would elect to bring all its facilities in-house. But Edmond, who joined BTFS as operations director in February of this year, following previous stints at Johnson Controls, HSBC and Mace Macro, sees it another way.

"Do you think it's that unusual when you compare us to the other large outsource companies - the ISS's and the Sodexos?" he asks. "These guys have pretty large self-delivery teams."
He continues: "BT's core business is provision of fixed-line services, broadband, mobile, TV products and services as well as networked IT services, in the UK and globally, and to be good at what they do they need efficient facilities services that are safe, clean, well maintained, compliant and most importantly available! For them to get that they need a facilities/workplace solution. We're in a workplace that's got 7,000-plus buildings around the UK, scattered from the Isles of Scilly to the Orkneys, so there is clearly the scale and ability to bundle that together and run it as an in-house offer."

He adds that with the previous contractual arrangement: "BT had got to a point where service standards and satisfaction was beginning to be questioned. BT felt that a credible way to grow back in that space was to reinvest the management fee into the business. It had the scale, it had the people and it could employ the means to upskill the leadership." 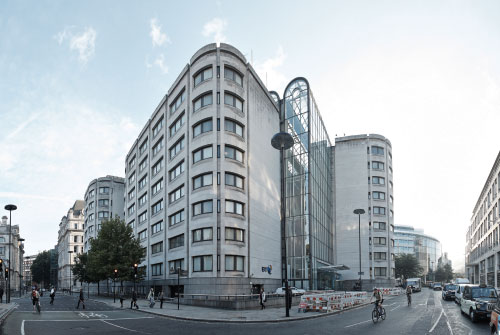 Prioritising people
BTFS splits its UK (and now Ireland) management structure into three different regions: the south-west, the south-east and northern England, Scotland and Ireland (NESI). These are led by regional service directors and managed by territory technical and facilities managers. Aside from some specialist technical services, which vary according to demand and region, the majority of services are self-delivered - apart from catering, which is outsourced to Eurest.

"Other than catering, we're open-minded to tack on anything," says Edmond. "If we've got the volume of work and we've got the ability to train our people and there's a continuity of work, then there's every chance we'd be keen to take it on."

Given the self-delivery model, there is a lot of staff to be managed - 1,700 people and rising, including housekeepers, engineers, FMs, technical supervisors and support staff. With the majority of staff not desk-based, rather than singularly relying on emails and the internet, BTFS' communications strategy revolves around road shows, toolbox talks, team meetings, listening groups, encouraging managers and leaders to travel around the business and meet with staff and, recently, the establishment of an employee forum.

Edmond says that as soon as BTFS was set up, the number one priority was its people, from their remuneration to their training and development programme.

"We found some really good hires from the retail business sector (Edmond's background is in oil and gas retail), and there is definitely a different way of thinking, with people trained and developed in the way of customer service. That mindset is what we've brought into BTFS and what we're trying to grow."

He argues that although the whole concept of creating BTFS was to treat BT as a customer, being part of BT puts the facilities team in a much stronger position because business and service delivery is enhanced by their having better access to, and therefore a deeper understanding of, the wider corporate business' strategic objectives.

He explains: "We have essentially an open door into BT as a business. We don't have to adopt different values but [rather] the same ones as BT, and they're great values. One of the hardest things to say to a customer is no, but when you're part of the organisation it feels a more credible thing for you to say at times. You can take a much firmer line, and you can invite yourself into the problem the business feels it has and say, 'I'm here to help, I want to make a difference, I'm committed to making a difference; but I want to be part of all the fact-finding and try to understand why we even have the problem in the first place.' My experience of outsourcing is that sometimes the contract gets in the way of that."

Whether it is self-delivered or outsourced, measuring satisfaction rates is an important part of the facilities contract. BTFS uses a single CAFM solution that allows it to track where its staff are scheduled to spend their time, whether on planned or reactive work. Because the vast majority of the work is self-delivered, FMs are tasked with ensuring the quality of the work meets agreed standards. A quality assurance team is also used to conduct escorted and non-escorted audits into workplaces every month to check on progress.

Another measuring stick is the property helpdesk, which, says Edmond, "is one of those numbers everyone knows", so, whether it's for service requests or service defects, customers use one number and in that way quality control is kept in check.

BTFS conducted a survey a couple of months ago with the top 1,000 leaders in the BT business to ask for their views on BTFS and whether they'd seen a difference. Edmond admits there had been some unrealistic expectations among customers (for instance, following the buy-out it was believed some of the services that had been reduced at exchanges by Monteray at BT's request would be reinstated), but the survey revealed high recognition rates now that facilities personnel are clearly branded with the BTFS logo.

"Our encouragement to our employees is that we're being more interactive with the customer and over time people have started to notice that," Edmond adds. "But it's a continual challenge and we're still very much in our early stages."

Good communications remain key. BTFS recently TUPEd people in from Aramark in Ireland; a move deemed a positive one from the perspective of those who were moved across. "This success is because we invested a huge amount of time with those people to tell them what life in BTFS was going to be like," Edmond tells us.

He adds: "The good thing about BTFS is that when we talk about efficiency it's not about negative connotations, such as reducing head count. In fact for me it means more heads, because if I can be more efficient and bring more services in-house, I can grow my head count and will do that to the point where I can offer these services outside BT as well." 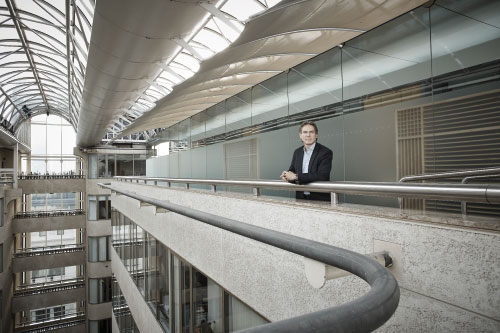 External services
Perhaps, given the nature of BT's core business, it shouldn't be such a surprise that its fledgling facilities business is planning to offer its services to external clients. BT already has strong existing relationships with both the public and private sector. For example, BT Health is a large provider of services to councils and the NHS, while BT's agile working solution is sold from within its Global Services group, so the public sector and large corporate portfolios would certainly suit BTFS' skill set.

"I'd equally say most people in an FM organisation wouldn't turn down an opportunity that might come their way, because the whole procurement exercise will test whether there is a genuine match between the needs of the client and the service provider," Edmond says. "For now, though, we're concentrating on growing our market awareness."

He adds: "As it's our own team delivering the service, FM becomes the biggest advertisement for service growth into non-BT clients. FM is so much more than doing someone else's work for them. If you seriously think running a cleaning service is only that then let's talk, because it's so much more. Every now and then there are some real nuggets - workspace or energy management. Those are the really exciting things, the value-adds. That is where our relationship with BT is starting to grow because of the innovative aspects of some of the BT services."

For now, however, the task is very much about growing and developing the people within BTFS, while identifying talent that can be brought into the business as it grows. As for that old chestnut, insource versus outsource facilities, Neil believes it's all about situational leadership and being emotionally connected to your customer and their needs, current and future.

Does he believe there is a right or wrong answer? "Ultimately no, it is completely up to each organisation to do what is right for them. Having worked on both sides of the fence I can honestly say that I have seen both good and bad behaviours and practices that argue for both delivery models. It is what we are doing today for BT as a customer, for the BTFS business, and its employees as a whole that matters most."

"My job is to create that sense of purpose and passion in everything we do," says Edmond, "to create and shape a place where people are proud to work".

Ultimately he says it is up to each organisation to do what is right for them.

"Are BA wrong to outsource? And are BT right to insource?" Edmond asks. "The answer is that we're both right."