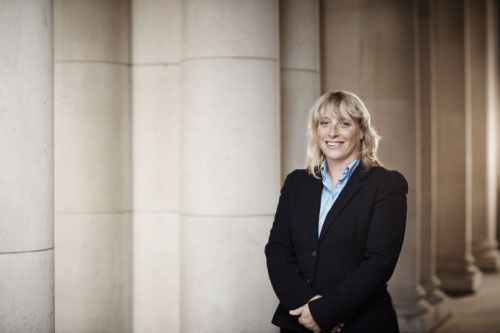 The new facilities manager of the year's championing of building information modelling across the central Government estate has set her apart from her peers, as Sara Bean reports.

Meeting Deborah Rowland at the imposing Treasury building just three days after her win, she tells me she's still on a high from receiving the accolade FM of the Year, which not only recognises the contribution she's made to the reorganisation of the central government property estate - but also her zeal in ensuring FM plays a key role in the Government Soft Landings construction strategy.


The size and scope of her role, as head of facilities management policy and strategy at the Government Property Unit, is daunting.

There are currently 7,510 buildings on the Civil Estate, of which 1,789 are classified as offices; yet previous to Rowland being hired to help deliver efficiency savings across the central government on facilities management, there was no central FM team in place.

As Rowland explains succinctly: "The scope [of the task] was to identify what we've got, identify what we're spending and come up with a strategy to do it better, and that's where I came in."


Being worth it
Prior to joining the Government Property Unit, Rowland had already proved her worth on a number of major projects, the most notable being on the project team behind the construction of Barclays' iconic 1 Churchill Place building at Canary Wharf. Yet, like so many in FM, she fell into the career by chance.

"I saw a job advertised as an assistant FM at L'Oreal, which wanted all-round administrative/ organisation skills in a fast-paced reactive environment; all the things I could do, though I hadn't heard the term [FM] before," she remembers.

From these beginnings Rowland was eventually TUPEd into Symonds Group Ltd under Oliver Jones, who she says "took me under his wing and that's where FM became a career for me".

She adds: "It wasn't a deliberate mentoring role, but under his guidance a different world opened up to me, which until then I didn't know was there. I was also very aware that people applying for FM roles - while I was an assistant at the time - were all surveyors, and all men, and I thought 'I can't compete.' That's when I started doing my MSc in FM - and it snowballed from there. It was the real leapfrog into making FM a career."

Rowland then moved into "the very different environment" of the World Cargo Centre for BA, a 24/7 service which entailed meeting onerous service levels agreements. "It was a challenging job," says Rowland wryly, "but it formed part of my learning curve in FM."

Following a stint at Rentokil Managed Services - which, at the time, was pulling together all of its services to offer a TFM package as part of a managed services role to clients - she went on to join the newly created FM team at Barclays, which was moving for the first time into outsourcing.

"Barclays had gone from a previously disparate in-house set up to appointing three main contractors across the UK for the whole of their portfolio," explains Rowland. "I was responsible for the mobilisation and transition of all of those contracts, and all the soft services specifications, data, reporting and helpdesk."

From there Rowland took up a project role for the construction of Barclays' renowned building at Canary Wharf, an experience she describes as one of the highlights of her career.

"It was a fantastic opportunity that you don't get very often," she says. "I was on the project team from inception to completion and mobilisation, and moving the people in, so I saw the whole project through."

Rowland's experience at 1 Churchill Place informs much of her thinking now on the development of the Government Soft Landings concept, which champions better outcomes for built assets during the design and construction stages.

She explains: "What I'm talking about now in Soft Landings is what I actually did at Barclays. That was my basis - though it didn't have a name then. But it really did work because I was able to challenge the architect on layouts, finishes and the design. Everything had an operational budget early on, and any changes to design were reflected in my operational budget. The criteria was to deliver [the building] at less cost, but higher quality. So, I was given a blank sheet, and instructed, 'do what you have to do to make it work.' People love working there, and it's because we had what is essentially Soft Landings."

Rowland's invaluable spell at Barclays led her on to consult on a variety of workplace design, procurement, strategic reviews and change management projects. This included working on the operational strategies and design for the new KPMG headquarters at Canary Wharf; carrying out a FM strategic review of the University of London centralised room booking process; and working on the FM logistics plan for The Pearl Qatar - an artificial island located offshore of the capital, Doha, and spanning nearly four million square metres. 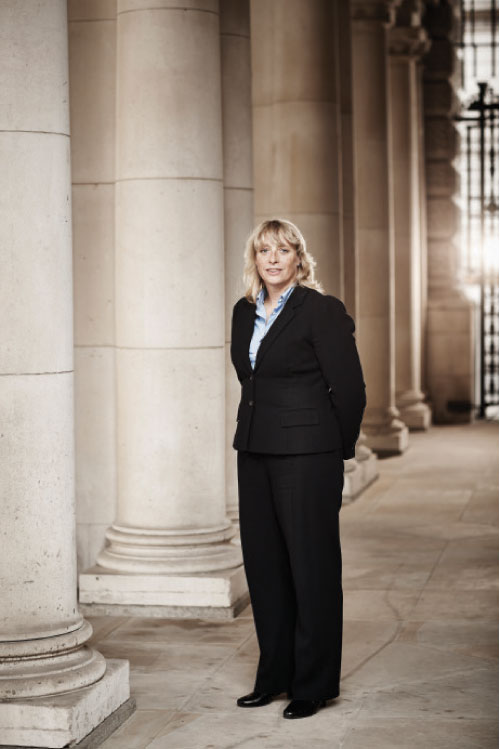 Public sector
Another formative experience for Rowland was with the London Borough of Hammersmith and Fulham, where she carried out a full strategic review to centralise FM service delivery.

She explains: "I worked with them for 18 months to change how they were delivering FM, as they had in-house disparate services and rather entrenched ways of doing things, with individual fiefdoms that didn't work together."

Rowland compiled a "vision and guiding principles", working with local authority departments to establish needs and requirements. Although she'd previously done "bits and bobs in the public sector", this was the first time she'd immersed herself in it.

"It was a massive culture shock," she remembers. "I couldn't believe how they did things, and I spent a lot of time working across departments to understand their requirements and their political agendas. It was very different from the private sector, but a lot of FM is about stakeholder management; managing the people and their journey to a combined direction and vision."


Government Property Unit
Her ability to lead team members and stakeholders in the same direction and vision has certainly come into play in Rowland's current post as the head of facilities management policy and strategy within the Government Property Unit. Reporting into the Government's Efficiency Reform Group, she was tasked with developing an FM strategy that met the requirements to deliver efficiency savings across Central Government on facilities management.

Setting up a Facilities Management Board consisting of heads of estates and FM across 17 central government departments, plus some of the larger Arm's-Length Bodies (ALB), she's driven the departments to act as one customer and reap the benefits of central buying, standardisation and co-ordination.

She explains: "There were three objectives that I wanted to achieve, which is what I was working with the FM Board to develop. Three things weren't being done very well at all.  There was no consistency of approach across the whole estate (consistency); the data was very poor (transparency); and, not being an intelligent client, we were buying in separate pockets. My vision was to pull all these threads together and develop the FM contract model to deliver those three elements."

The Facilities Management Board has been pivotal, she explains, "because that's been my stakeholder group. We would not be where we are now without that stakeholder group and working with them. Ultimately, it's about dealing with the people, understanding their requirements and their needs".

The FM contract can also be applied to any public sector organisation, acting as a knowledge base across the public sector to provide guidance on best practice procurement and service levels.

Government Soft Landings and building information modelling Rowland has also brought her considerable expertise to bear in taking on the role of chair of the Soft Landings Working Group, which forms part of the Government's construction strategy.

She explains: "We had lots of horror stories on buildings that were procured with no operational input - for example, schools which won awards for design and sustainability, but no one showed the janitor how to use the Building Management System so they couldn't turn the lights off.

"It doesn't make any sense that if we're going to construct a building, we don't have the people who are going to maintain and operate it making key decisions from the very beginning. Government Soft Landings is about cost avoidance, so what you stop from happening is where you make the savings."

Government Soft Landings (GSL) has attracted some early adopters, including correctional facilities for the Ministry of Justice, a new national measurement laboratory and a number of MoD projects. Rowland has also set up a stewardship group, to help document and share information from each project, and has asked each government department to identify a GSL lead and ensure they've got a GSL champion embedded in each project.

A key part of the process, she says, "is the utilisation of building information modelling (BIM) as a springboard in helping FM to come forward in the design process.

"Soft landings can happen without BIM, as I did in 1 Churchill Place, but what it does - and this was my remit out of the construction strategy - is to align construction with the operation estate and the end users' requirements, so that what we build is fit for purpose."

Tired of hearing too much "BIM-wash", Rowland even helped set up industry group BIM4FM to consider the relationship between FM and BIM in more detail.

She explains: "BIM was being portrayed by techies as just the technology, with loads of coverage on how BIM worked, but not about its benefits in helping to strip out inefficiencies."


The future
The new FM Contract Model will be operational by next year, and by 2018 it is predicted to start bringing in savings of £93 million per annum. GSL, meanwhile, is to be mandated for every new project by 2016. Rowland's other key priority, though, is to be "evangelical" about facilities management - raising the profile of the profession in both the public and private sector.

She's already pioneering FM education and research, working with the Facility and Environment Management Board at University College London to join up university-based FM researchers and FM people in government departments, and she sees herself as a role model in encouraging women to join what is still a male-dominated profession.

For now she says: "I spend most of my time talking to people. You've got to give them a vision, show them a direction and best practice."

In terms of best practice, Deborah Rowland is showing FMs the way - and, in the words of the awards judges, is "an outstanding winner" of the title Facilities Manager of the Year 2013. 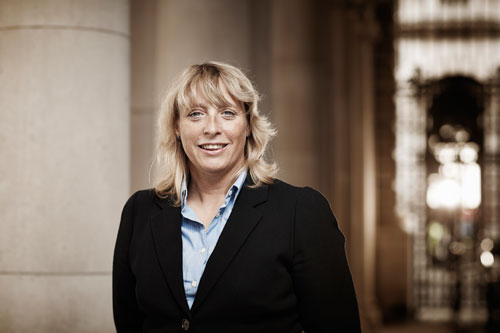