Drinking it all in 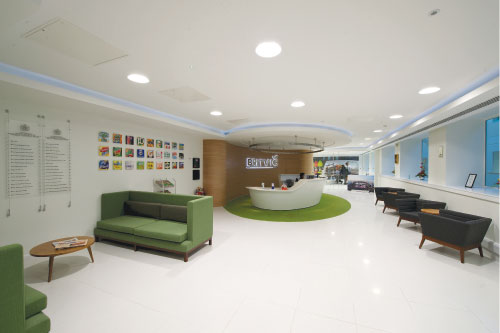 The BIFM award for 'Impact on organisation and workplace' 2013 recognised the relocation of Britvic Group's head office from Chelmsford to Hemel Hempstead which, according to the BIFM judges, "resulted in a step change in how the business collaborates and grows its market presence as One Britvic".

When Britvic Group relocated its HQ to Hemel Hempstead, 70 miles from its Chelmsford home, the move was used as an opportunity to introduce more communicative and productive ways of working, with the result being that instead of losing valuable people, more of its staff than ever are motivated to congregate and collaborate at the all-new head office site.


The project involved relocating 250 existing head office-based occupants - encompassing marketing, supply chain and administrative functions (including FM) - while satisfying the needs of dispersed customer management employees. Bringing these disparate groups together was one of the main reasons for the move, but also one of its greatest challenges.

Project sponsor Sue Skinner, GB HR director, explains: "As a branded consumer goods company, specialising in soft drinks, brands are at the heart of Britvic's business, so collaboration between the marketing and customer management teams was very important. That just wasn't happening in Chelmsford.

"Geographically, because the customer management teams were based in the Midlands and down the M1 spine, it was quite a geographical commute for them to come round to Chelmsford and realistically, it wasn't worth the drive for them to go there as it wasn't the best office space."

She continues: "For the marketing department, the Chelmsford space did not lend itself to exciting creativity and, as a consequence, many of our marketers were actually working much more in central London, with the agencies. While geographical acceptability was important, what was crucial to us was creating a collaborative workspace, where teams could feel like they had got a single home to do business, in our own space with our own brand."

The Chelmsford headquarters did not lend itself to a communicative working atmosphere, consisting of Britvic House - a five-storey, 32,000 sq ft 1950s building in need of total refurbishment, and an owned 10,000 sq ft, listed building. Both were traditionally designed with individual offices, walls and high storage units which acted as physical barriers between departments.

New offices were required that would help the firm create an environment that put commercial collaboration at its heart - with a space that would work for different teams with differing requirements. The other proviso was to create somewhere that staff would be proud to bring customers, suppliers and partner organisations.

The estates team carried out an evaluation to determine the best location, and Breakspear Park in Hemel Hempstead was selected, being very convenient to the M1 and with good rail connections. The Breakspear Park building offered 35,000 sq ft of space across one floor, with the option for more if needed. This additional space was taken up just two months after the move, when a dedicated marketing suite and meeting rooms were created on the third floor of the building for customer management meetings and events, saving Britvic the estimated £300,000 it would cost to host these events at external venues.

Once the building was acquired, RLF was appointed construction project manager, with architects C2 in charge of the design, led by Britvic Estates. In addition, a steering group was formed to ensure that the core purpose of the move, to change the ways of working (WoW) at Britvic, were realised. The WoW team comprised representatives from facilities management, estates, HR, communications, business functional leads and IT. The project also had an internal programme director and an external programme director, and expertise in the built environment from FM Guru.

Because of the importance of winning over staff, particularly the Chelmsford-based employees - who were understandably resistant to the move - an employee information forum was established to give them the opportunity to contribute to the design and layout of the new premises.

Skinner says: "We were respectful of those who decided not to move, but wanted to generate excitement among those who were moving. We'd made some central decisions about, for example, the furniture we were going to have, but we asked them for views on choices that could be made, [such as] offering them a selection of different types of desk. We encouraged informal voting on layout and design, asked for ideas on naming room areas and invited staff to come over to the visitor suite on the ground floor of Breakspear Park to generate excitement about the move before it happened." 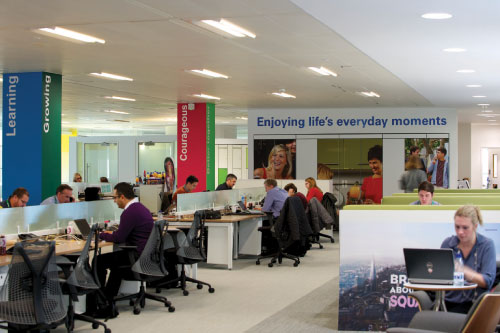 Open plan layout
The new space at Breakspear Park is split over four quadrants with 250 desks, with one of the quadrants designed as a communal hub featuring a series of desk benches and informal meeting spaces. It is designed with bright and vibrant colours, and offers a range of the firm's branded soft drinks and refreshments to encourage colleagues to network and develop stronger working relationships.

Skinner explains: "If people have a one-to-one catch up meeting with somebody they'll tend to meet there and that means you've got more fluidity in the way space is used."

The work areas within the other three quadrants are also designed to encourage community and collaboration and feature fully equipped kitchen areas with a selection of hot drinks, water and branded drinks. Employees are not assigned an individual desk, aside from the provision of 20 permanent or "anchor" desks for people that are in the office five days per week, who then act as a "pull" for their teams, who tend to choose to sit around that area.

"We wanted to be clear about creating community areas for teams, but also make sure that those with an anchor role are a natural point of gravity if you want to know, for example, where to find something," says Skinner.

"The rest of the team can hot desk and there's much more fluidity and utilisation of the space. This arrangement reinforces collaboration and working where you need to work."

The building also houses 40 meeting rooms and project spaces in a variety of sizes, with different specifications depending on the equipment or purpose of the room. Each of the rooms is branded with the decor and furniture reflecting the brand colours and feel, and some of the rooms offer flexible spaces that can be split and opened into a variety of sizes and layout configurations. This flexibility is echoed by a new pattern of working given the extra commute for many of the staff.

Skinner says: "Because of their longer commute we wanted to enable flexible working, so we set out as a principle that for many teams there'd be a three-day week in Hemel, with the rest of the week spent with partner organisations or customers. We also support home working."


FM team benefits
The facilities team at Britvic not only played a central role in the success of the move, but the way facilities are delivered has been revolutionised due to the relocation. Previous to the move, there was no formal FM service at Chelmsford, with most of the FM services outsourced and just a small general office management model in place, with little strategy or focus on service or the business requirements. Once the decision was made to move to Breakspear Park, it was decided facilities should be centralised and a new FM team was recruited two months before the move.

"We brought all of the [new FM] people together and gave them an extended induction and made sure they were working together as a team before the move," says Skinner. "We also invested heavily in their customer service ethos, which I'm pleased to say has really paid dividends."

On the facilities team's first birthday review they were delighted to report over 40 complimentary comments from satisfied customers within the business, including: "Just wanted to tell you how brilliant you've been over the last year. It's been a tough first year for us adapting to the constant moving target that is our job roles. Every one of you has done an AMAZING job and I couldn't think of a better team of people to work with!" 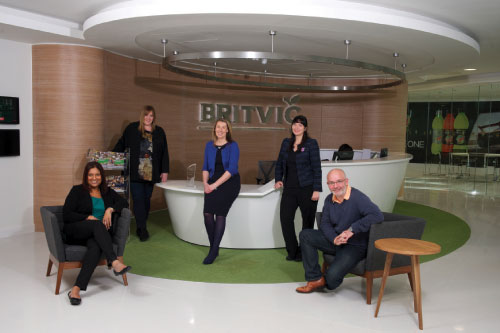 Post-occupancy success
This high praise is just one illustration of the overall success of the move. A staff survey showed that 90 per cent of employees agreed the new HQ was a place they were proud to bring visitors, while - far from losing a large chunk of its people - the company has seen a marked increase in the number of employees who now travel to Breakspear Park compared to the Chelmsford offices.

Of the 255 employees at Britvic House who were invited to relocate to Breakspear Park, 14.5 per cent did not make the transition in December 2012, which was far fewer than the 50 people (20 per cent) it had been estimated would not make the move; and of the 60 employees who agreed to trial the new building before committing to a permanent move, just 13 elected to leave.

The greatest gain has been in daily attendance figures, with the expected amount being 200 daily plus 25 visitors and the actual proving significantly higher, with average attendance at 355 and 94 visitors. And given the scale of the move, snagging problems have been minimal, including a review of air conditioning temperatures, some changes to signage, the speedy acquisition of the new third floor marketing suite and the addition of new meeting rooms.

Skinner tells us: "Because of its success, the site meeting rooms are also regularly in demand, so we have turned the circular locker rooms into formal meeting rooms as well, with a door so they're more private. In that way we are continuously responding to staff feedback.

"The other main benefits [of the move] are that it's easier to cascade information throughout the organisation. The reality was that before in Chelmsford if you made an announcement, there was a small proportion of people on site, perhaps 200, while at Breakspear it's more likely to be 300 to 400 on any one day."

Despite its undoubted success, Skinner confesses her trepidation when she saw the level of competition within this category at the BIFM Awards.

"The team was so excited on the night, because we'd put a lot of effort into the bid and we know it's a fantastic story for Britvic. We wanted people to see the passion we've got as a business in what we've done.

"But realising we were in the biggest group - it being the impact award - we knew we were up against great competition, so the team was absolutely delighted to win the award and get the recognition - it really means a lot to everybody."
Also filed in:
Topics
Features
Content
Features
Case Studies
Workplace services
Sectors
Public Sector