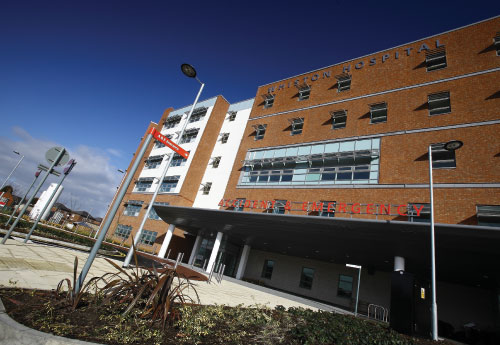 Bringing FM expertise into the design and build of St Helens and Whiston Hospitals in Merseyside has created two of the top-performing hospitals in the country. Sara Bean finds out why they won the BIFM award for Excellence in a Major Project.

The high quality patient-focused amenities of the new St Helens and Whiston Hospitals in Merseyside, serving a population of 350,000, are a brilliant example of the enormous benefits of embedding facilities management expertise into the design and build of a construction project from the very start.

And as if to prove it, for ensuring the seamless delivery of the new hospitals through the bidding process, design, construction, commissioning and handover through to operations, VINCI Facilities has received the BIFM 2013 award for Excellence in a Major Project.

The project began in 2002, when the St Helens & Knowsley Teaching Hospitals NHS Trust made the decision to replace two outmoded hospitals - originally 19th-century workhouses - with two new hospitals: Whiston Hospital, a £250 million, 80,000 square metres, 900-bed acute general hospital; and St Helens Hospital, a 20,000 square metres day treatment centre (for assessments only). Both were to be constructed on the existing sites, prior to the demolishment of the earlier buildings.

In 2004, NewHospitals Consortium was appointed to construct and manage the redevelopment. VINCI Construction was selected to design and build both hospitals, while VINCI Facilities would provide hard FM services for the interim and steady state periods (35 years), providing 24/7/365 hard FM requirements. These would include building fabric (walls, windows, etc), mechanical and electrical (including medical gasses), grounds, pest control and removal of waste.

From the outset, the VINCI sister companies worked together with client and stakeholders to embed FM into building design.

Cliff Morgan, project manager for VINCI Facilities at the St Helens and Whiston Hospitals, explains: "From 2004 to when we put a spade in the ground, there was a lot of work needed to get to what was wanted. This meant bringing massive teams together to make sure that what we built was what the Trusts wanted when they finally moved in." 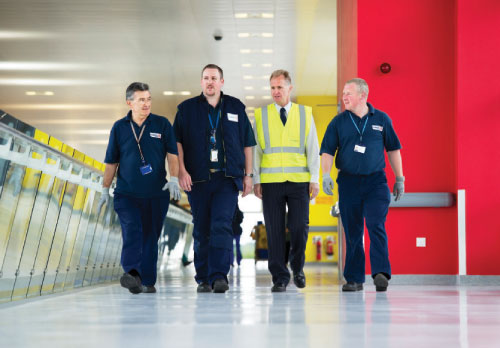 Grand designs
A FM core group was set up to assess the needs of hospital staff, patients and the community. Results were fed to the project steering group for authorisation and, from there, to sub-groups responsible for developing the detailed delivery plans. This included Trust User Groups (TUG) where hospital staff at both sites discussed room specification and equipment with designers, the FM team and departmental leads. Feedback was also sought from patient liaison groups and local community groups.

As well as incorporating feedback from user groups, VINCI Facilities was able to draw on its previous work on PFI hospital builds at Bromley and South Buckinghamshire.

Morgan explains: "Bromley had some access issues, such as it being very awkward to go into a room because a patient was in bed, so with this build we kept all the mains services in corridor areas. Now if we have to do any testing, like turning mains off because there's a leak, we don't have to go into the bedroom, but can do it in the corridor, which won't affect the patients.

"Another initiative was the design of segregated FM routes and spaces. Within both hospitals there are areas where patients and visitors can go which look nice, but if you've got a lot of FM movement down those corridors it can damage them, so we asked, 'Could we have a designated area, back of house?'

"The corridors were also designed to be much wider than how a hospital would look traditionally. In this way we affected the whole fabric of the way in which the building was designed."

Other FM-influenced design features include: encapsulated infection-resistant bathroom pods with easy-to-access maintenance panels; the use of profiled vinyl rather than wooden skirting to aid cleaning and infection control; avoiding the use of high-level lighting to minimise the need to work at height; wall protection to reduce potential damage risk within various areas; and above-ceiling service modules that allow easier access to valves, dampers and controls.

These initiatives were praised by the BIFM judging panel, which said it was "particularly impressed with the close alignment of FM services to deliver an enhanced patient experience and the complete focus by the FM team to achieve patient satisfaction, while maintaining hygiene and asset resilience".


Sustainability solutions
As well as providing a free shuttle bus service every 20 minutes between the hospitals to reduce traffic, a sustainable travel policy ensured off-site construction was used for many components, reducing site deliveries, CO2 emissions and traffic congestion. FM also influenced the procurement process, with an emphasis on quality items designed to last at least 35 years as standard. For example, the Schneider BMS and high voltage switchgear selected brings an annual saving of £102,000, a total saving over the 35-year period of £3 million.

FM played a central role in the specification of a host of sustainable design features, including individual room controls for air conditioning and heating, and efficient fluorescent lighting which utilises manual, motion and timed switches to minimise energy waste. Apart from the atrium areas where the Building Management System (BMS) maintains a constant temperature, all the windows within the hospitals can be opened for natural ventilation and brise soleil has been provided to south-facing windows to help manage solar gain and reduce the need for energy-intensive AC usage.

To further incentivise energy management, since April 2013 VINCI has operated an "emissions gain share" initiative, whereby targets are set annually. If results go 5 per cent or more above target - or 5 per cent or more below - the resulting energy bills or savings are split between the Trust and VINCI Facilities. 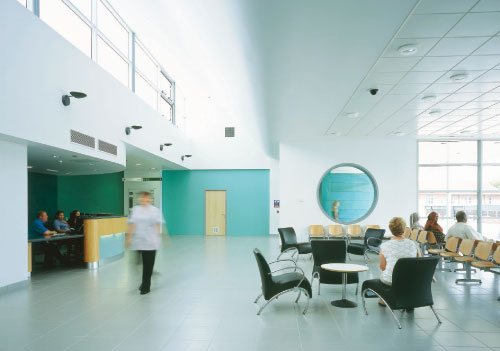 "In 2006, we took over 42 NHS staff and parachuted three VINCI people in to get them ready to move into the new hospital," says Morgan.

"Then we decided, since we'd got all these staff now under our control, they should go into the new buildings and see behind the plasterboard and above the ceilings, so they'd know where the services were. With everyone going into the building as it went up, they could see how it could be better maintained once we moved in. In this way, they were heavily embedded into the building before it was completed."

During the interim period, the FM team was tasked with running both the existing hospitals and the new buildings once they were ready for occupation. To help minimise disruption, a period of "double running" was devised to keep the existing buildings operational while the new facilities were mobilised.

An education programme was also set up to give the hospital staff essential knowledge to resolve simple faults on their own, which enabled the FM team to focus on major issues to help ensure a smoother transition.

"Because we mobilised the smaller St Helens hospital first it was a good learning curve," says Morgan. "We thought it would take three months, but as soon as people saw the new building and what they were getting, you nearly had to lock the doors to stop them moving in on their own!

"The three-month period at St Helens went down to two months, and we helped as best as we could. Then the six months at Whiston went down to three months, which meant we didn't have to look after the old building for so long. As soon as both the buildings were mobilised [St Helens opened November 2008 and Whiston was occupied from April 2010], we could deal with any teething problems, so we were always ahead of the programme."

Another example of the FM team's flexibility was when a generator test revealed less than 100 per cent surety during a mains outage, an absolute essential for a hospital environment. VINCI implemented a 24-hour "generator watch", using its own staff and specialist contractors to ensure the hospital wouldn't be affected while the problem was corrected.


Measuring success
VINCI Facilities' input into the design, build and mobilisation of the project was just the beginning of its long relationship with the two new hospitals. The ongoing challenge is to ensure its levels of service excellence complement the maintenance-friendly design of the new builds.

FM staff are equipped with Personal Digital Assistants (PDAs) connected to a new bespoke £300,000 computer-aided facility management (CAFM) system that automatically assesses response and rectification times against targets. This, together with the introduction of a central, on-site helpdesk to gather and prioritise all FM work orders, means the FM team takes approximately 2,800 calls per month, with 98 per cent of those calls answered within four seconds.

Compare this to previous hospitals where, says Sue Brandreth, project director, St Helens & Knowsley Teaching Hospitals NHS Trust, "staff might wait 20 weeks to have a light bulb replaced, hospital staff are now confident that their service requests will be answered promptly and efficiently".

However, improving response times isn't the end of the story. As Morgan explains: "We want to be proactive, not reactive, so we've set up an action group called the Weekly Inspections Team, where we go round the hospital with the other service providers checking for any maintenance problems, and if we pick up anything that needs doing, we'll feed that back to our helpdesk.

"This means that unlike the old days, when a PEAT (Patient Environment Action Teams) inspection was used to bring facilities up to standard, what we're focusing on doing is to bring the whole hospital up to that standard already. It's like we're conducting our own internal PEAT inspections on a monthly basis.

"It works so superbly that when we had the new Patient-led Assessments of the Care Environment (PLACE) inspections [which put Whiston top in the country in the acute care category, and St Helens third] the amount of work we had to do to bring it to the level we thought it should be at was minimal."

Success is also reflected in satisfaction survey results with NewHospitals Consortium, which generated 95 per cent satisfaction in 2012.

In addition, surveys with 100 random hospital staff and 100 random helpdesk staff have reaped satisfaction scores of over 90 per cent apiece for four consecutive years.

While being understandably "over the moon" at the BIFM award, Morgan reflects the collaborative nature of the project when he says: "That award is not just for VINCI Facilities, it's an award for NewHospitals and the Trust. We've all achieved excellence - it's not just us on our own, as we couldn't have achieved it without them."

Brandreth is delighted with the results: "The new buildings will have been opened four years in the spring and you would still think you were walking into a brand-new hospital. It's my job to make sure that happens, and VINCI helps make my job easier."