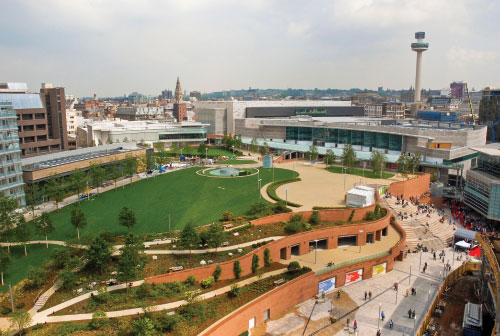 Liverpool ONE's shops, cinema and residential space are underpinned by two kinds of park space - a 4,000 underground car park and five acres of lively green park space at the top. Each has its FM challenges, as Martin Read reports.

Now one of the UK's largest regional shopping centres, Liverpool ONE is managed through a joint venture.

Broadgate Estates and Grosvenor Liverpool Fund each have a 50 per cent stake in the Liverpool ONE Management Company, which employs 160 people.


Car park
The underground car park, which can accommodate 4,000 vehicles, is covered by more than 50 supply and extract vent fans.

Liverpool ONE has outsourced its management to Q-Park, and it is noticeable how the space is particularly clean and well-lit. Keen to ensure the car park experience matched the brand values elsewhere across the estate, Q-Park was selected to ensure uniformity of lighting, standard of finish and level of customer service.

One of the car park's decks is not typically opened up during the week, instead it is used at weekends and for other periods of peak demand.

Because of the car park's location across large open floor plates, smoke control is a critical issue. Grilles on one side of the car park push air across and grilles on the other take care of air extraction. Carbon dioxide (CO2) sensors are positioned on the walls and near the extraction ducts, each connected to the site's control centre. Should the extraction ducts note a sudden rise in CO2, supply of air will be ramped up.

Air supply fans then ramp up and shut down the general ventilation system on the other car park floors, concentrating supply of air into the zone affected by the fire.

The extraction system does exactly the same thing, shutting down everything else and ramping up extraction leading to very rapid movement of smoke across the floor plate.
It's a sophisticated system, with the structure of the car park acting as a smoke curtain.

It has been deemed that the car park does not, from a building control perspective, require sprinklers.

"The fire brigade will tell you we were absolutely mad not to put sprinklers in there," says estates manager Chris Bliss, "but when we looked at the risk profile against the cost of installation and the chance of misuse, we realised that there are very few car fires in multi-storey car parks around the UK and that where you do get one it's generally from a fault with the maintenance of the car and they don't spread - despite what the movies show you - from car to car to car." 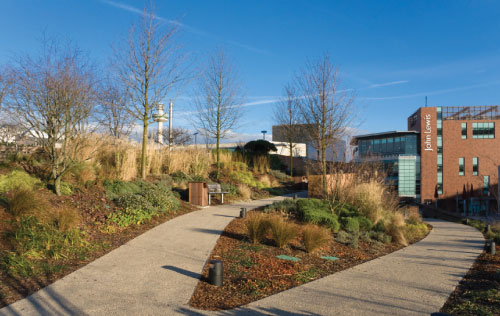 Chavasse Park
The site's 42 acres of shops, offices, hotels, cinemas, car parks and warehouses are complemented by five acres of park space that can be accessed from various levels around the estate.

Called Chavasse Park, the park of today is a restructured version of an original park of the same name, and a flexible open space that adds significantly to the overall appeal of the Liverpool ONE estate.

The park has residential, restaurant and retail units sited on its borders, while the 215 room Hilton Liverpool, one of two hotels on the Liverpool ONE estate, is also situated here.

As a green space in the centre of the city, and one that is sited on top of a major retail centre, the park has proved to be an attractive addition to the skyline. The estates team helps put together events across the park and maintains the grounds.

When it rains, water drains down through the soil to a gravel stone base, under which are polystyrene blocks and a drainage mat.

When water gets to the drainage mat it then follows the curvature of the park to escape. Some of the drainage water is retained for use when irrigation of the park is required, which is a frequent requirement. Given the shallow roots, trees need irrigation every seven days if there's been no rain.

"It wasn't on our to-do list," says estates manager Chris Bliss, "but we realised that with all our environmental management plans and biodiversity that, actually, it hits all criteria for Green Flag status, so we went for it."

To date, the park is the only city urban green space in the country to have obtained Green Flag status.

There are typically two people maintaining the park during a normal five-day week, but in times of additional activity such as planting and maintenance in the summer months, additional personnel are taken on.

The biggest frustration for the team is the people who cut through the planted areas, damaging flower and plant beds. (Fencing has been installed to reduce the problem.)


Music to visitors' ears
states director Chris Bliss is keen to point out the various entertainments that he and his estates team help to put on throughout the year.

"There's an activity we've had every year for the past three years in the summer called 'Tickle the Ivories'," he explains. "We put five pianos out in the streets in key locations and schedule a certain number of professional pianists to come and play. So they perform probably 15-20 per cent of the time, but the rest of the time it's free play for visitors. We conduct piano lessons, too. For us it's about finding these different ideas and concepts, setting them up and then getting people to join in.

"For example, we've got a stage where the Philharmonic Orchestra might be playing and people sitting there watching. Now, in most commercial shopping centres you wouldn't want that, but here we do. We really want people to come here and have a wonderful day, then go off around the city to see the cathedral or the Beatles Story."

London (Central)
Circa £50,000 per annum depending on experience
Reference
59380
END_OF_DOCUMENT_TOKEN_TO_BE_REPLACED