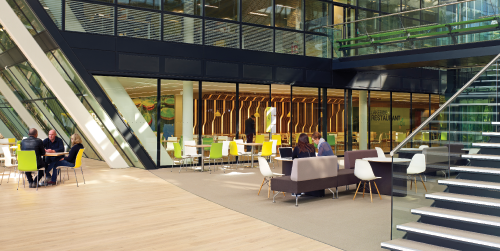 The move by pharmaceutical giant Astellas to refit and occupy an abandoned Norman Foster building has resulted in a BCO fit-out award and a burgeoning respect for the company's FM function. Martin Read reports.

If the striking frontage of 2000 Hillswood Drive in Chertsey looks familiar, it could be because the building was designed in the 1990s by iconic architect Sir Norman Foster for a completely different occupier (computer games manufacturer Electronic Arts).


Having lain empty for five years, the building was taken over by fast-growing international pharmaceutical business Astellas in 2012 where its radical fit-out has received wide-ranging acclaim. Last year, the British Council of Offices awarded the project its 2013 'Best Fit Out of Workplace' award. The judges praised a workplace that had been turned from a "tired, redundant building" into "an inspiring place to work".

So today, 2000 Hillswood Drive is a colourful, dynamic and well-appointed workplace.

Different levels retain the elemental theme introduced when the building was first opened, and the mix of open-plan space, meeting rooms and congregation space has been well received by an initially sceptical workforce.


From HR into FM
But although the fit-out project is a good showcase of how an FM department can grow through its own management (via the canny use of project management consultants), it also contains a sub-plot in which an individual office manager finds, and then fits herself into the FM profession.

All told, she's been with Astellas for 15 years, starting out as office manager with Yamanouchi, one of the partner organisations in a big 2005 merger that saw two smaller pharmaceutical businesses, Yamanouchi and Fujisawa, join up to form Astellas.

Post-merger, the newly enlarged Astellas business relocated to Lovett House in Staines, Surrey, then also into several other buildings nearby, before realising that its rate of growth necessitated the need for another, larger building in which everybody could be under the same roof to collaborate more effectively. All this activity - the merger, the move into one building, the doubling of its real estate footprint, the move into one building again and the taking on of another 20 per cent of real estate - had all been undertaken with the same sized in-house team. Indeed, initially, Blundell was one of just six Yamanouchi UK employees, at which point in her career she did the traditional "bit of everything", in this case organising (among other things) the payroll, pensions, life assurance and golf society events.

"Facilities for me was such a wide-ranging topic, and I'm a people person, so it appealed," says Blundell, who had been surprised in her previous role by the exacting nature of some of the company's senior level medical staff (there's an element of traditional hierarchy in the structure of the pharmaceutical business).

"I still have a link to HR," she says. "For years I reported to a senior HR director, and she had an FM background so we had a bond. Today, I report directly to the European director of corporate real estate and FM. It's a recently introduced job title, and it's helped raise the profile of FM both here and in our European offices."

Before the merger, when Yamanouchi moved to an office in Egham, it was Blundell who ended up running the relationship with that building's landlord - something that proved to be her first exposure to the fast-paced world of FM. The 2005 merger saw Blundell associated with a project to re-fit the merged operation's Egham offices, and it's at this stage that consultancy Procore, which has since gone on to represent the company throughout its recent facilities projects, first became involved.

Procore was brought in to project-manage the newly merged company's move to new premises in West Byfleet. That was "a huge building and a huge challenge", says Blundell who, following this project, was invited to move from office management into a permanent role within the company's newly formalised FM department). 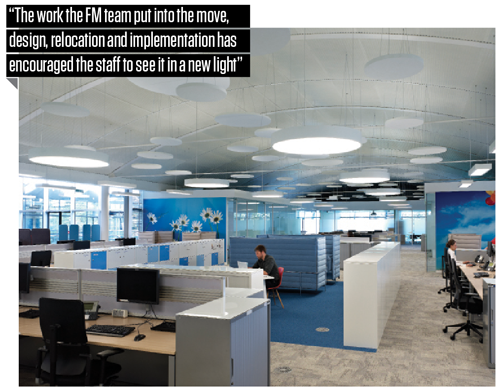 The Hillswood move
When Astellas acquired the freehold of Hillswood, Procore was appointed as project manager and cost consultant for the relocation, overseeing the refurbishment and fit-out. (The company also acted as SKA assessor.) The project saw Astellas move down from three buildings to just the one. Astellas Pharma Ltd, the sales and marketing affiliate for the UK market, is also based in the building.

Now committed to a career in FM, Blundell, with a post-graduate diploma in facilities management under her belt, became a key player in Astellas' project to move to 2000 Hillswood Drive in 2012.

Her profile rose dramatically within the building as a result of that exercise, in which Blundell was part of the senior staff team involved in all aspects of the move and fit-out.

"In our previous building there was an element of 'Oh, facilities - you're the people who top up the photocopier and toilet paper," says Blundell, "but the move project definitely increased the profile of FM.

"Normal attitudes exist within some, in that FM is seen as being there to clean up and make sure things work," says Blundell, "but I think the relocation to the new building - and the work the FM team put into the move, design, relocation and implementation - has encouraged the staff to view it in an improved light. I get a lot more respect now because everyone knew I was involved in choosing the building." Senior people in the steering group soon appreciated that Blundell was deeply involved in a very high-level role.

"We knew we had to really communicate the project," says Blundell, who set up a website to allow staff to track photographs of the fit-out project as it developed.

"People were very nervous of moving in here, because we were going from a very static, traditional work style to workstations, allocated storage and agile working. There was a lot of nervousness about all this, but you could almost feel the transition they went through when they walked through the door. They all thought, 'Wow, this is fantastic', although for the first few months people had to get used to the new work style. They've settled down now."

The pharmaceutical profession in general, and Astellas in particular, tend towards using closed office spaces, particularly for senior staff. With Procore and project manager Stewart Holmes, the Hillswood fit-out saw a deal struck in which the balance of rooms to open-plan was reversed.

"We've introduced banks of secondary areas to support the overflow," says Procore's Stewart Holmes. "Those departments know that they can overflow into that area. It's just about getting that level of comfort."

It's been more than a year since the move, but Blundell is still bumping into people who tell her they love how the building facilities work.

"I think one of the reasons we won the award was because we had significant challenges we faced on the project but still managed to deliver and move in on time. I think we used between 80 and 90 per cent of our old furniture and AV equipment from our previous premises here at Hillswood."

Furniture made redundant by the move was all disposed of to charities and as much of the AV equipment reused as was possible. "The only thing that was really new here was the loose furniture - furniture needed to accommodate the alternative work settings and support the agile workstations," says Blundell.

And in their review of the project, BCO judges praised the way in which the refitted space "encourages employees to interact with their fellow workers - particularly important in a field of merged organisations - and the numerous visitors to the company". The "street" area on the ground floor was praised by judges for its café, restaurant and the both open and closed spaces set aside for formal and informal meetings.

The BCO reported how "Astellas deserves praise for its confidence to take on a building specifically designed by Norman Foster for a very different type of occupier, and one that was in a state of considerable disrepair having lain empty for five years."

Indeed, there were plenty of problems that the fit-out project team had to overcome. The fit-out budget had to absorb the cost of fixing a leaking roof and façade.

Problems with the roof meant that the fit-out project needed careful financial management.

"As a result, not all of the mechanical and electrical equipment was replaced brand new so we had to strip out, but we still had to do some significant mechanical work. When we started the ground-floor 'street' had no heating, so we introduced radiant panel heating. We really had to cherry-pick what we prioritised, but when we moved in everything was functional," says Blundell. 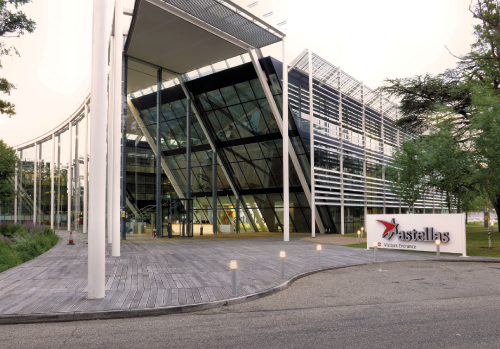 Retendering of services
With the move complete and a year of operation available for analysis, Blundell has been overseeing Astellas UK's re-tendering of its FM services, a process that is set for completion by April. The exercise in reassessment of these services was the CRE and FM department's response to an international, company-wide programme to see what new operational efficiencies could be achieved.

Before the Hillswood relocation the incumbent total FM provider, Emcor, provided all FM services, both hard and soft, with the exception of catering. With the move on the horizon, Emcor was given a one-year extension to see the client through the move. During that time the type and scope of FM services was reviewed, although ultimately the same services were specified, albeit as single services. Astellas put out all services to tender, opting to award separate contracts to "best in class" suppliers. With Hillswood located some way from other local amenities, the catering facility is vital, as are the co-located sports amenities and facilities (such as showers) that support them. The site has 24/7 guarding, with other FM services delivered from 7am to 6pm.

Astellas opted to go with single-service suppliers for optimum performance, and Procore was again employed to help set up supplier engagement days as part of the procurement process. Emcor was also invited to bid on the individual service contracts.

Mobilisation of the new single service contracts has been staged over three months to allow for any initial glitches to be ironed out.

For Blundell, the future looks bright. She has every intention of overseeing the facilities requirements that the next stage of development for the fast-growing company brings, whatever they may be.

FM has had various reporting lines in the past, but today the company fully values the impact FM can have in supporting the business and its operation.

"The next six months will be interesting," says Blundell. "We will be working really close with our suppliers, making some small improvements."

And as part of the facilities services project, Blundell's own job description was evaluated, as was the need to support.

"With five suppliers working on site and our wanting to present them all under one banner and adopt a one-team approach, I needed some back-up," says Blundell. "I have a new facilities officer starting in March and we've also take on a new health and safety officer.

"Over the years as facilities manager, I've been involved earlier and got a heads-up on things happening. I'm comfortable that if they were to take on anything else new, we would be able to absorb it, be it mergers, takeovers or whatever.

"In 15 years my job has never stood still," said Blundell. "There'll always be another project on the horizon."