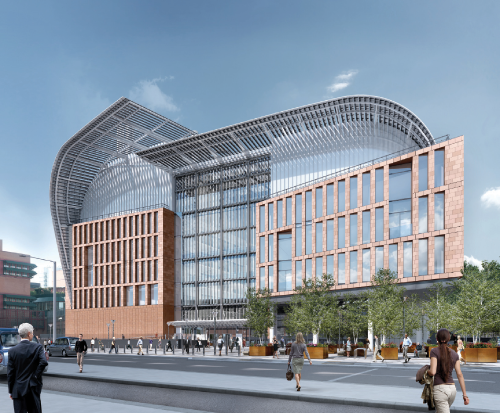 The new Francis Crick Institute will test the power of design to drive collaboration and innovation, says Richard Byatt.

Just north of the British Library something very big has landed.


Occupying a whole city block, the steel, glass and terracotta-clad building is being fitted out, ready to open fully in spring 2016.

At the heart of a "medical knowledge quarter" that includes the Wellcome Trust, the Royal College of Physicians and University College Hospital, the new Francis Crick Institute (named after the scientist who, along with James Watson and Maurice Wilkins, discovered the structure of DNA) is a unique partnership between the Medical Research Council (MRC), Cancer Research UK, the Wellcome Trust, UCL (University College London), Imperial College London and King's College London.

The Crick will be a world-class biomedical research centre for human disease. David Cameron described it as "one of the most significant developments in UK biomedical science for a generation" and Sir Paul Nurse, president of the Royal Society and chief executive and director of the Francis Crick Institute, has said: "If we get this right we're going to change the world."

Alongside the science, the Crick will also be conducting a live experiment in how the design and management of facilities affects behaviour. In an age of virtual working this is a massive investment in the value of bringing people together.

The Crick represents a huge culture change for the people who will be working there from next year. LRI and NIMR will cease to exist - collaboration is the Crick's raison d'être.

There will be no departments. Instead, scientists will form specific interest groups and work together in shared laboratories grouped around communal spaces. This will encourage collaboration and allow ideas to flow across traditional boundaries."

Assistant construction director Henry Robinson says there are three things the Crick does that don't often happen with science buildings.

"It's designed for collaboration, it's designed for future adaptability and it has a real visual connection with the public. It's almost creating a marketplace for science. It's a whole campus in a building. Despite the use of ICT [bio-infomatics is a growing field] a lot of science is still physical; you need to put things through centrifuges, you need to see how bugs grow. It's all about seeing people."

And it's all about people seeing science. "It interacts with the public," says Robinson, "which a lot of science buildings don't do. There's no stand-off area or big fence around the site - the public walks past and looks right into the heart of it."

The most literal manifestation of the Crick's mission to explain is the huge (30m by 25m) glass screen facing the western entrance to St Pancras International. Made from low ion glass for greater clarity, it will be literally a window on science. 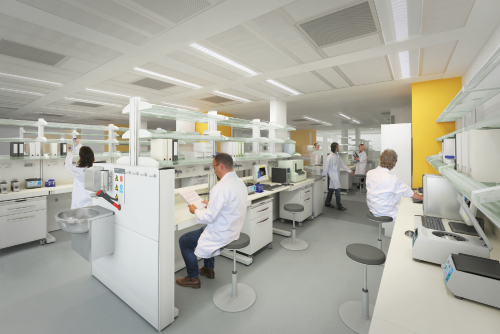 It is a big building - about 93,000 sq m, with a third of this below ground. It sits in a largely residential area so, to the north and west, the architectural design has sought to reduce the impact on the community while still making a strong visual statement.

The architectural design is by HOK with PLP. The building is cruciform in shape with four interconnecting lab wings over four floors, lit by a long east-west atrium and crossed by a shorter north-south one.

The first third of the building is effectively public space, featuring reception, a café, exhibition areas and a 450-seat auditorium housed in a large organic "bubble". Walkways criss-cross the main atrium, linking labs and hub meeting areas. Most commercial buildings have a net to gross space ratio of around 80 per cent. The Crick is closer to 50 per cent owing to the sheer amount of support space and plant. There are three full lab floors across the building and an additional half floor on the south side.


Collaborative culture
Henry Robinson explains the huge culture change that the building represents and how people are making the transition.

"It's been coming for some time, so we've had user groups that informed the design and that's been invaluable.

"These user groups were made up from the two institutes (NIMR and the LRI) that will be the initial people moving in. So they've collaborated already in getting the building to where it is at the moment, but they will come together to become the Crick, so we're not just thinking about how we do things today but what is the better practice? We want everybody who's excited about science to want to come here.

"It's a culture shock because we trust the things we know and change is never easy. It needs people to understand the change before they can get excited about it. People are starting to see how this different way of working could benefit them. The building is one part of the picture but the culture that comes with it is something totally different."

Collaboration at the Crick is being encouraged in three ways - through the creation of open plan labs, by scattering scientists across the building and providing hubs for discussion. It's the design and layout of the lab space that makes the Francis Crick Institute groundbreaking. In most research buildings, laboratories are within an enclosed area. This building is organised in four clusters; in each there's a central area where equipment is shared along with specialist space.

"We've taken the equipment out of the lab and moved it into the central space," says Robinson. "We've pushed the write-up space to the outside corridor so that people see each other and walk past each other more. That in itself is a first step towards collaboration. It's more like a typical office interaction space, which labs typically aren't very good at doing. We've made the primary lab space as open plan as possible to get the maximum visual connectivity."

The result is labs that are much more open. Groups can expand and contract in the space without feeling they are encroaching on someone else's territory. Because the write-up spaces open onto the perimeter corridor, a lot of work has gone into acoustic treatment. Acoustic matting has been installed above tiles, on columns and in some of the furniture. It deadens the space but allows for a background buzz. It's relatively expensive and in a lot of buildings it's value-engineered out.

"We've scattered the scientists so that you have the critical mass you need but added in other sciences, which we hope will create interesting discussions," says Robinson. "On each floor, in the centre of the four blocks, we've created an informal collaboration space, a hub." 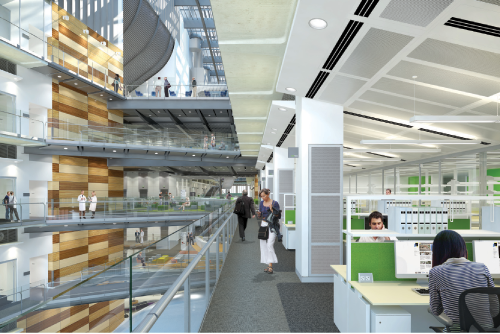 There are no meeting rooms on the lab floors - the Crick wants people to use the hubs. These are not just soft-seating areas in which to have a break, but spaces that the Crick hopes will engender co-operation. Researchers can pick up a coffee, discuss results, or maybe project onto a wall.

Everyone's lab manager sits in the collaboration space and the principal investigators' offices are deliberately small to discourage people from holding meetings in them. The only formal meeting space is on level one, although there are bookable seminar suites on the ground floor near the auditorium.


"We have to get people moving through the building and use these beautiful open spaces for collaboration. We think those chance conversations are what will really make the difference," says Robinson. "Ideas are capital in this world and sharing ideas is giving a bit of that capital away, but that's what's going to make the breakthroughs. The building is doing heavy lifting but it needs culture change to make it work."

The building is adaptable rather than completely flexible. There are no raised floors - they couldn't carry the weight of equipment - but the M&E systems allow a lot of change and service panels in the labs have plug-and-play connections for electricity and gases. Partitions sit under a bandraster (exposed grid) ceiling and can be moved without disturbing the ceiling.

"There's no expansion capability on the site, everything needs to be done within the envelope," says Robinson. "We can't create more space but we can convert from wet science to dry science and we believe that's where research is going."

The Crick team built a mock-up of the new labs in a west London hangar. "I don't think we've really found out just how valuable the mock-up has been," says Robinson. "It got people on board. Because the building's so large, on a drawing the labs look small but when you can move through the space, feel the tables, see where you're going to put stuff - it took much of the worry away. It made a massive difference to how they felt about the building."

Crick, Watson and Wilkins won science's highest prize in 1962. Perhaps the ultimate measure of the new institute's success will be the number of Nobel prizes awarded for the work done in its collaboration spaces. But they will have to change the rules on a maximum of three winners.

For more information and a fly-through animation see www.crick.ac.uk

Richard Byatt is a freelance writer on the workplace. To read a longer version of this article and to watch a video interview with Henry Robinson go to www.richardbyatt.com 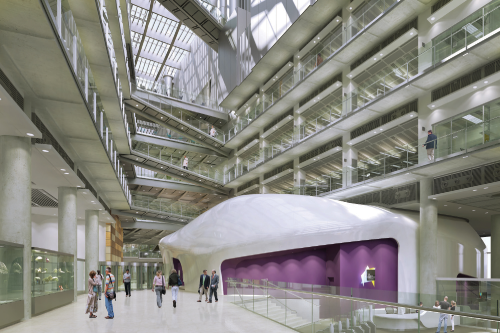