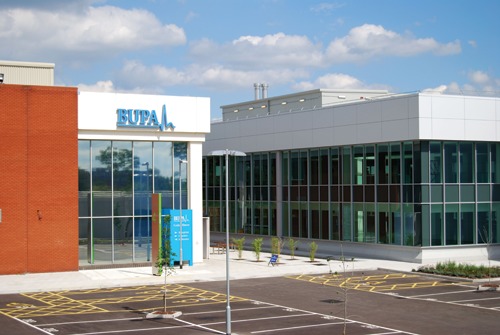 On 7th February this year, the Met Office issued flood warnings along the Surrey stretch of the Thames Valley near Staines-upon-Thames.


Two days later, the area was put on a severe flood warning alert - and subsequently, the waters did indeed breach the bank. As the flood hit, homes and businesses were evacuated. It's a nightmare scenario that could have spelt disaster for Bupa Health Funding UK and its three million or so clients across the nation.

The beating heart of the health insurance giant resides at its Willow House campus in Staines-upon-Thames, where more than 700 staff work from Mondays to Saturdays. The large multi-building site houses the 'vital organs' of the health provider's property portfolio - its medical customer service call centres and a key IT data centre.

It was a good thing, then, that the company had insured against the devastation of its business by invoking its incident management team (IMT) to activate contingency plans. Bupa's IMT comprises representatives from its FM, IT, corporate affairs and business continuity departments as well as supporting group representatives when required.

Because of inevitable changes in membership as time passes, the IMT runs exercises on at least an annual basis as part of Bupa's business continuity policy. After the February flooding, the team met several times to review lessons learnt and identify improvements possible.

The result of Bupa's first invocation of its business continuity plan - no downtime and, from the customers' perspective, "business as usual' throughout the weather alert - understates the drama of the situation and the work that needed to be done.

Colin Lowe, Bupa's head of business continuity resilience management, was involved throughout the emergency. He subsequently converted the story of the company's response to the flooding into a submission for the 2014 Continuity Insurance & Risk (CIR) Business Continuity Awards. It was entered into the 'Most Effective Recovery' category - and declared the winning submission in May.


The tide is high
The effects of the flooding around the Bupa site were considerable. In addition to the floodwaters that reached the office buildings, the deluge severely disrupted surrounding roads and rail services. Worse, it affected drainage and sewerage services, and it was water from the drains - Willow House sits at the point at which many of the drains in the area converge - that ultimately caused the biggest issues. A new valve is to be fitted by the local water company during August that will help to prevent any recurrence of the sheer volume of water that converged on Bupa's site in February.

But even before the waters hit, the IMT had pre-emptively prepared its contingency work locations at Theale in Berkshire and Leatherhead in Surrey. Bupa's IT teams were thus able to perform a smooth transition of production systems from the Staines data centre to Bupa's secondary data centre in Manchester, making them operational for Monday, 10 February.

Several key employees were assigned to work at the contingency site to make sure that there was optimal back-up if the Staines office became inoperable, and by Tuesday 11th February this forethought was starting to pay off. The main campus had by now become unviable as a workplace and up to 300 staff were relocated across the two contingency sites from which they were able to continue dealing with the thousands of customer queries that Bupa handles each day. 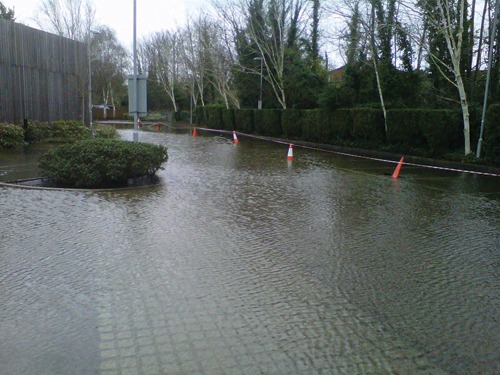 High levels of business confidence in its contingency solutions meant that the company's decision to invoke the IMT could be made at an early stage by management on the ground, with actions taken by the relevant teams immediately (despite their occurrence out of normal business hours).

Bob Lyle, facilities manager for the Staines site, was thus a central player in this, the first invocation of Bupa's business continuity plan.

As well as Bupa's own staff, Aquaflow - the locally-based company that provided the pumping equipment - "went well over and above the call of duty," says Lyle. "We didn't anticipate the sheer volume of water and they ended up pumping out 757,000 litres of water over the period. Their guys worked flat out and they couldn't have done anything more for us."


Local impact
Surprisingly, Bupa was one of only a few businesses affected in within Staines-upon-Thames, a function of the Bupa site's location and the lie of the land.

"Our building happens to be very close to the river," says Lyle. "The pumping station in our vicinity wasn't able to cope so we ended up dealing with the overflow from the drains on this side of the river." (This is one of the main reasons for the scale of the flooding on the Bupa site.)

However, for local residents, the impact of the flooding was acute.

"I don't think the scale of the flooding was reflected in the reporting," says Bupa facilities manager Will Greene. "Staines and Slough was a disaster zone; the devastation in the housing estate behind us was total. It was awful to see so many people homeless and having their things destroyed."

Says Lyle: "We tried to do what we could. Dental [department] sent out ration packs with toothpaste and toothbrushes to the community centres. They were grateful to get the basics, clothes, anything like that. It was really strange to be in that situation.

Bupa's FM team also set up a welfare area within Willow House for the police, fire brigade and emergency services.

"They were digging people out of their homes and needed somewhere that they could get some respite," says Lyle. "The community was grateful for that; Bupa has a large property portfolio in the area so we felt we had a duty of care to try and help out where we could." 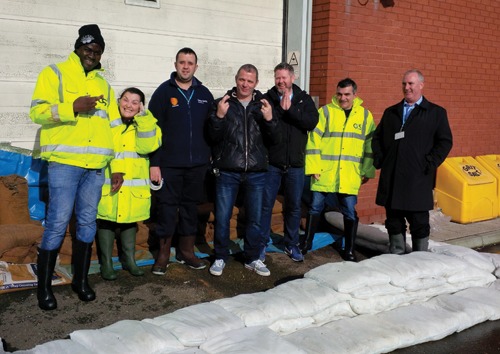 Preparing for next time
Lessons learnt from the event include the need to bring forward the point at which the IMT is convened ahead of a flood warning.

Nigel Westcott, head of facilities management, explains: "We have looked at our plan and brought it forward a bit; we'd convene the IMT earlier, and we know now that in terms of the drain infrastructure the water company pumping station isn't likely to cope with demand."

"We'll also be storing more equipment on site," says Greene. "The pace at which water could come into the building is very quick, so the need we'd have to pump it back out - should it reach the data centre - is acute."

"We've also got a lot more portable low-level pumping equipment on site now, including a pump that is submersible. If a sandbagged wall gets breached - and we've developed a strategy to avoid such a breach - then the equipment is now on site."

One product the team is excited about deploying is an alternative to sandbags that comes packed in boxes and is "as light as a feather". The product soaks up water and retains it.

"They are brilliant," says Lyle. "They're easy to store, more hygienic than sandbags, quicker to mobilise and their shape is also better to manage than sandbags. It's a very impressive product, and we've now allocated storage for it."


In the limelight
The FM and business continuity teams got plenty of recognition within Bupa for their work.

Bupa's next disaster recovery scenario under its ISO 22301 obligations will be acted out in November, with lessons learned from the winter's floods put into the test situations to see how well they work - although the next scenario is likely to be mounted around the prospect of a derailed train (the main line from Reading to London runs right past the Staines buildings).

"All teams involved in the flooding have now experienced a 'real' situation," concludes Lowe. "Most have reviewed and revised their processes to incorporate any lessons learnt. Examples include building stronger relationships with external emergency service providers such as coach firms, and reviews of internal communication streams."

"This was the first time the business continuity plan had been invoked. We had to get it right, and we did," says Westcott.

"It was important that we had that level of trust from senior management to make our local decisions, because it could have all blown up in our faces - and we wouldn't be having this conversation!"