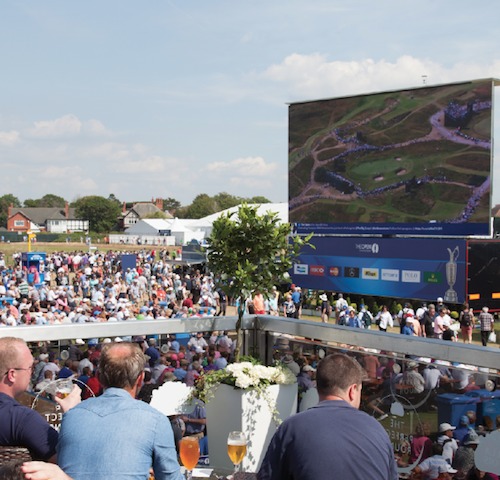 It wasn't only victor Rory McIlroy who had to make the perfect pitch at the British Open last month. Sodexo's FM players start sharpening up their game at the course a year before the first tee-off, as David Arminas reports.

The crowds of admiring spectators have long gone from the fairways of the Royal Liverpool Golf Club that hosted this year's British Open Championship in mid-July.


The winner, by two strokes, was Rory McIlroy, who hoisted the traditional Claret Jug in celebration on the final day of play - a Sunday.

There were probably some hangovers on the Monday, but it was business as usual for Michael Wells, director of championship strategy at the R&A. As the business offshoot of the Royal and Ancient Golf Club of St Andrews, it has responsibility for organising the Open and is the client for all contractors working for the event (See Client box). It will be well into August before Wells - who has worked on 15 Open tournaments - and his team finally pack up and move on.

"We're here a good five weeks after the final stroke of play, but the day after the end of the Open is quite emotional for us," says Wells, who took over as director two years ago. "You work so hard for so long and for one week it takes over your entire life, and then it's all over."

The 143rd Open Championship was the 12th Open to be hosted by the Royal Liverpool at Hoylake, and on the shoreline of the River Dee estuary. The first one at Royal Liverpool was in 1897 and the previous one was in 2006, for which the clubhouse underwent a £2 million refurbishment.

A links course, developed in Scotland, is the oldest style of golf course. It is located on coastal sand dunes areas and is characterised by narrow fairways among fescue grasses with few, if any, trees and hills.

Planning for an Open starts soon after the R&A awards the event to a golf club. That can be several years in advance, sometimes as many as five or six.

Apart from working with contractors, Wells and his team have to notify and work with local landowners because of increased traffic near their properties. Parking has to be arranged, police work has to be co-ordinated, local authorities have to be notified and meetings with the local accommodation sector have to be set up.

But the real work at the course starts a year before the first stroke. That's when most the 60 to 70 contractors and suppliers, many which are local, are engaged for everything, from catering and security to waste collection. 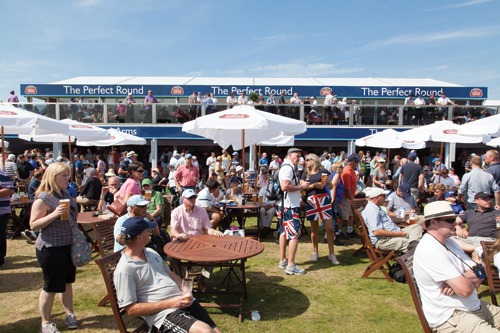 The Open may be the oldest golf tournament in the world, but it hasn't shied away from the latest technology to keep its thousands of guests close to the action, says Wells.

Gone are the days of spectators wondering what's happened when they hear crowds one or two fairways over roaring with approval. Apart from the large on-course TV screens showing live ESPN and BBC coverage, this year's Open was the most wireless ever, with free WiFi coverage throughout the course. Fans could pick up live scoring through the official Open Championship app for Apple and Android devices.

Having taken on the hospitality contract with its takeover of Gardner Merchant in 1995, since 2008 Sodexo has done all sales and marketing for the Open's hospitality, while the R&A does all the event marketing and selling of Open tickets. Sodexo also runs all the big bars and food courts dotted around tented areas. The main hospitality tent was the length of hole 16, where guests could watch golfers take their second shot on the 16th fairway.

The Champions Club, a large tented venue beside the hospitality area, was new this year, where the level of hospitality was available to a larger paying general market. There were no reservations, but also no shortage of tables, stand-up bars and a lounging area with comfortable settees in front of a widescreen HD TV. You walk in with other Champions Club members and sit down at a table with a bucket of chilled beer and wine, and just help yourself.

"With wireless provision, apps, and many large-screen TVs, people are picking their tee-off times more carefully," says Dicks, who has seen two Opens. "Not everybody wants to get to a hospitality suite for a 12.30 formal lunch. So Sodexo has to be more flexible with the timing of meals but also has to maintain quality."


Mouths to feed
Sodexo also catered for the R&A at the organisation's several marquees. These included one exclusively for R&A members, one for the players and their family members and one for Open officials and R&A guests, such as visiting officials from golf organisations including the US Professional Golf Associations. There was also catering for up to 700 accredited media people.

"Even though it was a cashless environment, the idea to use a cashless card to order meals was to ensure that the right people ate in the right place," says Wells. "This meant that Sodexo could better plan the number of expected orders for food and drink at each of the eating venues."

Sodexo also provided a tented area and catering for members of the Royal Liverpool Golf Club and a tent for major 'patrons' including HSBC, Rolex, Mercedes and UBS, which had their own suites. "We worked with them to design the suites and cater for whomever they chose to invite, including some of the players they sponsor," says Dicks.

Many of Sodexo's 600 to 700 on-site staff came from Sodexo-run sites across the country such as Ascot Racecourse and Everton Football Club. "But we often go to a local agency that we have worked with to employ hostesses," says Dicks.

Dicks has seen a change over the past decade in what hospitality clients demand, partly driven by the downturn in the economy. "Formal dining has given way to slightly more casual dining," he says. "Before, there were likely three price points. Now you need four, five or seven different prices because people want more choice."

Getting the logistics right is one of the biggest challenges for catering contracts at events where there is no set infrastructure.

In many catering contracts things like power, drainage, water and sewage are taken for granted. Here, all those have to be sorted out first, says Alex Beaumont, who has worked at an Open for each of his nine years at Sodexo. For the past two years he has been head of Sodexo Prestige's events business and the on-site go-to man for problem solving.

"I start work about quarter-to-four in the morning, when I see in all the deliveries. It's still dark and suddenly, far away near a green, are the headlights of the grass cutters' machines. They move in formation around a green, cutting the grass to get the stripes exactly right.

"I'll wrap up at half-past nine, or 10 o'clock at night. It'll take two or three weeks to set everything up, but only three or four days to take it all down and move it out," says Beaumont.

Ten facts about the Open at Royal Liverpool:

Ten facts about the catering operation: 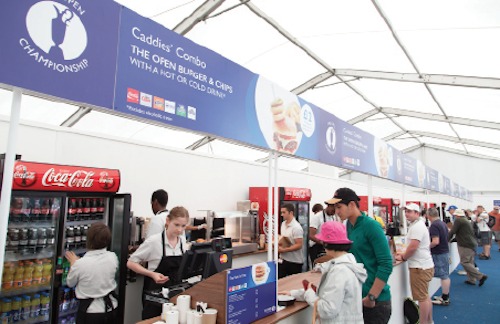 At the sharp end of overall catering including hospitality was Ben Dutson, the 29-year-old executive head chef of Sodexo Prestige Events. "It's my fifth year of doing the Open," says Dutson, who in June won an Acorn Award - given to the 30 most promising people in the hospitality industry under 30. He also picked up the Banqueting & Event Chef Award at the Craft Guild of Chefs Awards.

"The Open is one of the biggest - if not the biggest - annual event for us," he says. "All major events are challenging in their own way. For the Open, it's the sheer logistics and working with suppliers to get the volume we need. For example, I order up to 4,000 baby carrots, but they all have to be exactly the same. Likewise for fruit and the filet steak. Suppliers have to be in and gone between 4 and 6am, dropping off up 70 pallets of food. By 6am, 10 of us have done two hours' graft already.

"The hospitality offer has grown into more specific offerings and restaurants are being branded with their own identity, such as with the Champions Club."

All events want to keep their carbon footprint down and support local businesses, he says. "We do a lot of work with local butchers, bakers and farmers. I've also produced a document for us and the R&A that lists local suppliers and how far they are away from a golf course."

The Open has to show its green credentials, too. As the client, Wells relies on suppliers to show their own credentials up front when looking for contracts. He points to waste disposal and recycling as a major issue, from paper plates and plastic cups right down to the tent carpets. About 200 tonnes of waste is removed during the event, and 20 tonnes of that is carpet from the venues. But 85 per cent of the carpets are recycled, he says.

Wells says his job has many pressures, but one is overriding - everything has to be done on time and everyone has to be at their station come that first day. "People start queuing up at 6.30am on that Thursday and TV will be live, whether you're ready for it or not."

The R&A organises The Open Championship and a number of other amateur and junior events, some of which are sanctioned by other golfing bodies. The R&A also administers the Rules of Golf with the consent of 152 organisations from the amateur and professional game, and on behalf of more than 30 million golfers in 138 countries throughout Europe, Africa, Asia-Pacific and the Americas.

For the United States and Mexico, the US Golf Association is the governing body with which The R&A has jointly issued the Rules of Golf since 1952.


The majors - Four!
The Open Championship is the oldest of the four major championships in the now-global world of professional golf. The others, all held in the US, are:

The Open Championship is administered by the R&A, an organisation of The Royal and Ancient Golf Club of St Andrews. The Open is always played on a links course at one of 10 locations in the UK.