All the King's men 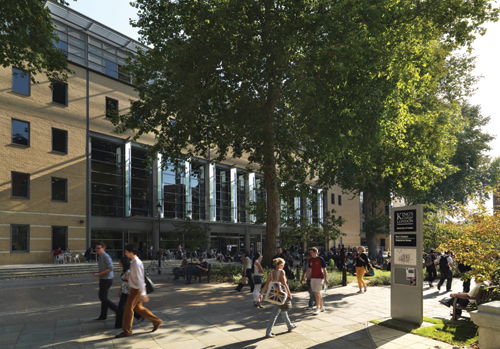 A major review of a 25-year build-and-operate PFI at King's College London has led to all of the client's staff, those of contractor Bouygues Energy & Services, and the student end-users themselves, engaging in provision of the facilities service. Martin Read reports.

In the aftermath of their joint bid's success in the FM Excellence in a Major Project category, two people are literally beside themselves with happiness at the result.

Tristam Slater, contracts and performance manager at King's College London and David Carr, managing director of Bouygues Energies & Services FM, talk in turn about the compromises and calculations each had to make, and it's this theme - of client and contractor at one in their approach to the demands of a changing customer base - that we return to frequently when discussing the 2013 accommodation efficiency review that led to their awards success.

Agreed at the turn of the millennium, the PFI contract covered two buildings on different King's College campuses: Old Hunt's House (demolished and entirely replaced) at Guy's and the Franklin-Wilkins Building (refurbished) at Waterloo. The deal included lifecycle replacement and operational FM at both locations over a 25-year term.

In 2012, with use of the two buildings having altered dramatically since commissioning - and a mid-way break clause in the partnership just a year away - King's and Bouygues chose to undergo a root-and-branch review of all aspects of FM delivery. An "aspirational target" of £800,000 a year was set as a marker, but the project has thus far delivered more than £1.1 million in savings. A better governance structure and improved measurement has also resulted. 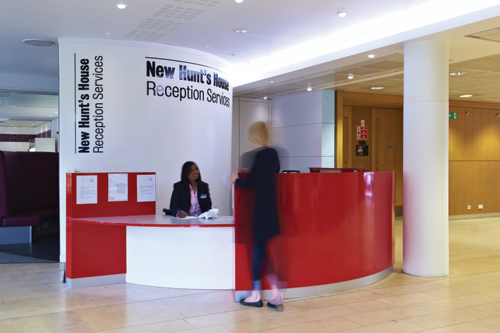 The world of higher education has changed markedly since 2000, with tuition fees key to students being seen as customers - and demanding customers at that. According to the Association of University Directors of Estates, eight out of 10 students say that facilities are a key factor in choosing a university. As for usage, from an original six days of 8am-6pm opening, the two buildings were now in use late into the evening, seven days a week.

The review started as an ideas jamboree; the review body heard suggestions from customers (academics and students) as well as other support staff. More than 150 ideas were gauged for their cost and potential impact. Change was both large and small, covering all areas of service delivery - M&E maintenance, cleaning, catering, security, energy consumption and waste management. Some work was as straightforward as wayfinding, with one member of the Bouygues team covering the entirety of the buildings in the guise of a student, asking himself what a student would want to see as signage from every location. Other ideas were more substantial.

For Bouygues, says Carr, "the review gave us the opportunity to think outside the current relationship and look at what else could be achieved by both parties".

Says Slater: "We started breaking down the buildings into actual and potential usage functions rather than the fact that the buildings were originally designed as research and teaching environments. Our learning and teaching rooms, for example, could be considered high-end meeting rooms within a corporate office facility. So what's best practice with them? How do you service them, how do you transpose between meetings to make sure to set up for next function, what layout and technology do you need? Our atriums and libraries are essentially large public spaces, so we started looking at shopping complexes where there's a transient population moving up and down aisles, operating extended hours.

"The aim was to evaluate our space for what we wanted to use it for, not what it was originally designed to do," adds Slater. "I've always seen our open spaces atriums just like a shopping centre, airport or train station. For 50 minutes in the hour nobody uses them, then suddenly you've 2,000 people coming through, charging phones, visiting the café and moving through space. What could we learn from others about that?"

The King's team also visited its sister universities in the US.

"The learning from that was about how we taught staff to engage with students; how our students' education experience is directly affected by the facilities they're getting."

Twenty-five per cent of Bouygues FM activity in the UK is in the higher education sector. For Carr, the work in the King's College review represented "a sea change in terms of our how we deliver services".

From a King's perspective, Slater is effusive about the level of buy-in from the contractor.

"From our point of view, the way the review was managed and the level of depth and engagement that Bouygues had to go through with our internal stakeholders meant they had to have a lot of new conversations. That level of engagement happened during the process, and now if you ask anyone in our user population they will rattle your ear off about what their part in it was; we had really engaged stakeholders.

One unusual aspect of the review was a change management tool used primarily in the production sector. Failure Mode and Effects Analysis (FMEA) was introduced as part of the review to assess the condition of M&E equipment.

"It's based on assessing whether a piece of equipment can fail, what causes that failure and what constraints such a failure might cause," says Slater. "The entire model is based on risk prevention."

"There was a lot of analysis," says Slater, "with Bouygues engineers, for example, analysing our air handling units to establish their run hours, which were fired in what sequence, which had most demand. In doing so they gathered huge swathes of information to help us evaluate the criticality of our plant."

All of this information on demand is now fed into King's design specification process so that instead of like-for-like replacement there may be an opportunity to introduce more efficient kit. Slater says: "The data allows us to build redundancy into the critical elements. It's a much more efficient and robust system."

And the FMEA approach has other, less immediate benefits.

"I once watched a Bouygues engineer talking with one of our academics about the FMEA model and how we maintained the robustness of our systems," says Slater. "He had all these sheets out, explaining what he was doing to this piece of kit to ensure it wasn't going to go down and thus compromise his research. He was even explaining what the redundancies were on our back-up generators. FMEA gave him a great tool to talk through our risk mitigation strategy with an end-user who doesn't have an engineering background. I thought it was absolutely brilliant."

Just after the BIFM Awards, King's College had its annual 'Student Union Rant Week', during which students detail any concerns they have. Testimony to the success of the project is that what used to be complaints are now merely questions about why things are done in a particular way - a far healthier response, and one that indicates how King's College's students are, it seems, now as engaged in the facilities service as the FM suppliers. 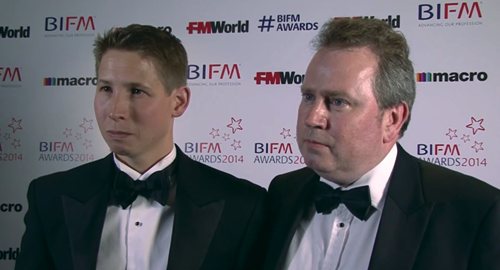 Another key change saw Bouygues maintenance staff, previously fixed to the King's contract, allowed to service other clients in the area.

Slater says. "They worked pretty much all time in our buildings, and we realised that this was preventing them from being economically efficient in deploying their resources.

Like the changing nature of the audience and building use, the arrangement was typical of early PFI models. But by moving to a demand-driven approach, Bouygues gets to be more economically efficient in its deployment of personnel while King's benefits from the greater experience of a wider pool of engineers and mechanics. There's a cost saving for King's, too.

Carr says: "The flexibility helps us. Our model is to perform as much self-delivery as possible. Shared expertise across our client's sites means less reliance on sub-contractors. It's about a focus on output."

"We didn't go into it blindly," adds Slater, "we reviewed our SLAs and put the necessary checks and balances in."

With energy prices predicted to spike wildly in the short term, the review also looked at new ways to finance shorter-term energy improvement initiatives - involving an innovative use of the lifecycle fund.

"In the current investment market we're not seeing a return on this money invested in our lifecycle account, on either side," says Slater. "Looking at our risk profile once we've gone through the current tranche of lifecycle replacements, a lot of that money will still be sitting there for eight years. That's a lot of capital not working for the best use of the college."

That capital, agrees Carr, will be put to much better and more immediately significant use by targeting energy consumption through measures such as changing burners in boilers, upgrading the building management system, checking the performance of the laboratories' fume cupboards and even changing how the buildings are metered to better track energy leakage or excessive use.

"In terms of engagement, it's the security guards and cleaners in their everyday work who'll see examples of energy being wasted. Training them to go around with their eyes open, feeding back what's happening to our management team, makes quite a difference."

And that's where the intelligent client comes in, says Slater. "We needed to help the Bouygues team feel they could challenge us as well. Previously, their attitude was not to ask the client why the lights needed to be left on in a particular building."

Solving this issued involved King's College's customer service training programme, 'Fit for King's'. As part of the review, an abridged version of the programme was designed for Bouygues staff. This, says Carr, has been hugely influential. "For me, this training is a big part of the change programme. From Bouygues' perspective it gives our employees the skills they need to question things."

There's also been new blood injected into both the King's College estates team and into the Bouygues on-site team.

Says Slater: "We recognised early on that Bouygues having a general manager on their side slightly removed from the King's side wasn't going to work. We were hamstringing him. He couldn't make changes as fast or effectively as he would have liked - that level of separation just wasn't working.

"So we made a decision at King's to man-mark the Bouygues FM. We appointed a new PFI manager on our side, and today the two of them pretty much work side by side. It's a constant conversation.

Bouygues' regional director Glyn Newby agrees that the change has helped to speed up decision-making significantly.

"What paralyses us as an FM company is getting more than one instruction from the client. But now there is a very clear management team to go to." 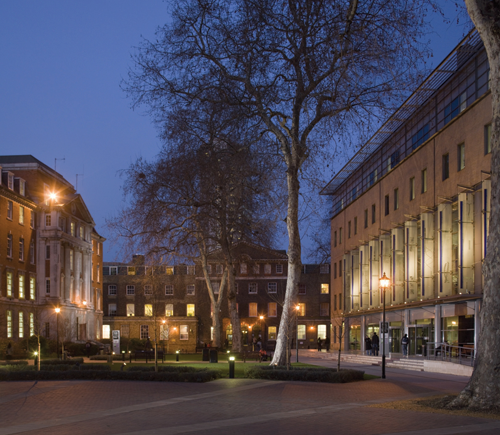