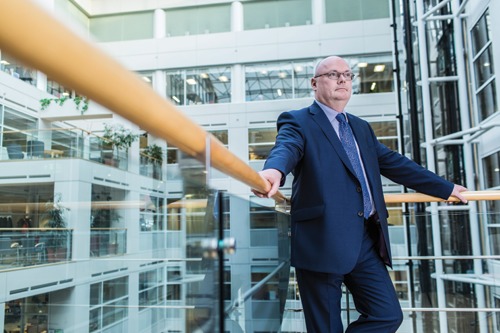 Having consolidated the FM requirements of more than 11 per cent of England's NHS estate, Dennis Markey explains to Martin Read how NHS Property Services has developed a £400 million FM market opportunity for one of the largest property portfolios in Europe.

Although money spent by the National Health Service on its estates is small compared with provision of actual healthcare, no one should underestimate the huge role that FM plays in day-to-day NHS life.

After doctors and nurses, the next single largest expense by the NHS is on FM staff. And now, an organisation barely three years old is about to make the measurement of FM performance across the NHS estate in England - and the services it subsequently procures - one of the FM sector's major talking points.

At the same time, NHS Property Services, a company wholly owned by the Secretary of State for Health, was set up to manage, maintain and improve those NHS properties previously owned by the SHAs and PCTs. Today it's responsible for 4,000 properties - doctors' surgeries, health centres, and administrative buildings - across more than 11 per cent of the NHS estate.

Before 2013, each PCT and SHA had its own estates department working to an annual budget - a figure typically released half way through the financial year once healthcare priorities had been met, and hardly an ideal arrangement for dealing with FM, particularly requirements  such as planned maintenance and capital repairs.

This is where Dennis Markey comes in. A chartered surveyor by qualification, his role as NHS Property Services' chief operating officer is his first in the public sector following posts with outsourcing giants including Capita and Serco.

Markey has, he says, been 'flying below the radar' in restructuring the management of FM across the 11.5 per cent of the NHS portfolio entrusted to NHS Property Services, bringing together all of its many estate departments under the common NHS Property Services banner.

"Suddenly we're now a £846 million turnover property company which offers enormous opportunities for efficiencies to benefit the whole of the NHS," says Markey. "We've essentially set up one of the UK's largest property companies in just two years."

He also believes that the result of the firm's work over the past two years will be the delivery of a huge market opportunity for facilities services - one dramatically affecting the wider FM market.

Markey's first task was to get a handle on the company's vast estate and its many disparate approaches to FM provision. The watchword was consistency, with the rationalisation programme seeing the property in each of NHS England's newly prescribed 14 regions split further into three or four operational areas. Establishing the total number of properties in the overall region and the geographic size of the area allowed for each area to have a common mix of properties and services - an exercise allowing for central measurement and area-to-area comparison of FM performance for the first time.

With areas demarcated, adapting the management structure was crucial.

"In some departments I acquired more managers than I needed," says Markey, "while in others I had very few. I also had people whose skill sets did not match the job titles and roles they were meant to have."

Markey introduced a new tier of management for each area. Area service managers, or ASMs, have since been weighing up their area's performance against others. These ASMs report to regional directors, who in turn report to Markey.

"I now have a management team that I believe can run effectively what the business will look like in 18 months once we've completed this next stage," he says. 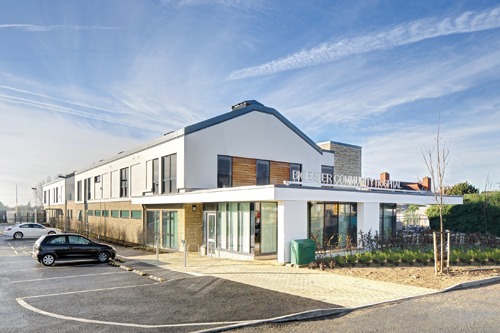 That next stage is a huge procurement programme that's a result of the business cases devised for each area by the ASMs. These have been informed by like-for-like comparisons that mean an outsourced supplier's service provision in one area can be compared with the same level of provision - by the same contractor, or a competitor - in any area of the country.

With the matrix of individual regions defined, Markey's team has been able to work out the extent to which FM provision varied across the estate. Some areas outsource all elements, some deploy a network of sub-contractors, while others still combine elements of self-delivery with outsourced supply.

A central service improvement team was set up consisting of experts on all areas in FM to define the NHS Property Services 'way' of delivering specific services, then benchmarking them against the market and adding the data for all of the company's FM contracts to a central system for comparison.

"For example, if we see one contract on which there are 170 people cleaning, we can now look at our overall model. If that model says that, in fact, 140 cleaners is typical for that kind of cleaning operation, we can work to that figure. Addressing just one such contract in this way could deliver us tens of thousands in savings."

Markey's team has acquired supplier performance data from each area.

"You can see specifications that have not been properly specced, work going on that isn't part of the spec (but that the supplier is charging for) and customers who don't really understand what it is they are paying for or what services they should have had provided," says Markey.

The variety has been enormous, with some services provided separately, others in bundles and others still using multiple suppliers to provide the same service.

What's more, says Markey, "you can see where we've been charged different rates for exactly the same services - simply because one area had a better negotiator buying in the services than another area."

Overall, the NHS Property Services rationalisation project encompasses about £400 million of FM spend a year. Broadly split, that's £200 million in self-delivery costs and the rest outsourced. Packaging that all up represents a £400 million market opportunity likely to have a major effect. With all of the analysis and business modelling work now complete, a procurement time table is to be published at the end of February - representing the initial call to the market.

What's amazed Markey is that no one in the FM service market has picked up on what he and his team have been doing.

"FM providers are so keen to be seen as strategic players," says Markey. "They talk about the importance of being strategic - but you've got to know what your market is doing if you want to play strategically. We work with the major FM players, many operating multiple contracts with us, yet it hasn't dawned on them what we're doing here. They just haven't put the jigsaw together." 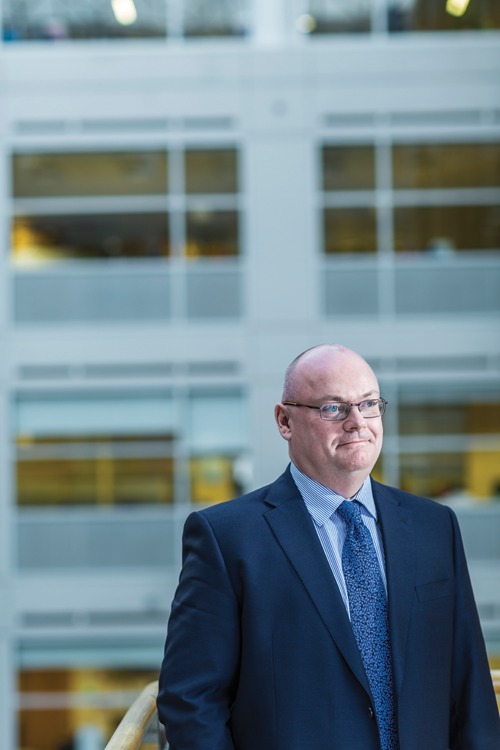 The ability to compare service provision will open up new forms of discussion with the CCGs, allowing each group's commissioners to spot any jarring differences in the cost of the service they receive.

"We're the people responsible for all FM services - cleaning, catering, security, maintenance - to the quality our occupier client, the CCG, specifies. So it's important that we show each CCG first that their level of service has been maintained, but also that we can charge them less for providing it."

And because procurement reports to Markey, local occupiers will struggle to justify contract variations. Anything that compromises the service delivered within the area against an agreed specification will be exposed.

"We won't dictate," says Markey. "But we will lay out the NHS Property Services way of doing things for a given service."

He accepts that in the short term a significant shift to in-house provision is likely, particularly in soft services. But cases put by ASMs to bring hard FM in-house may not prove so successful.

"In some areas we've inherited fantastic, top-end internal M&E maintenance provision, but in others it's sub-optimal. To bring those up to the same level we'd need to invest more than it would cost using established outsourced providers, so while some of my ASMs may aspire to bringing hard FM in-house it's unlikely in most cases."

The consolidation exercise has also exposed the use of hundreds of help desks, many of which are unlikely to meet the new specifications.

Whatever his ASMs' preferences, Markey believes the huge buying power in the company's hands will at last elicit a response from FM's major suppliers.

"We run 11 per cent of the NHS's portfolio and, as our clients become more demanding, we'll expect them as suppliers to start sharpening their pencils. But as the market engages and reacts to what we're doing, it may develop new ideas and forms of wider service delivery that work for us. I've no preconceived idea about what will happen."

Markey sees this procurement exercise as historic in terms of realignment of expectations on both sides - client and provider. The big savings will be tied to the changes to service being defined through the procurement exercise. Future savings are likely to be incremental once the new FM structure, its management and procurement across the estate, settles down.

It's also just the start of a new kind of relationship with the CCG client. Not only is NHS Property Services both landlord and provider of support services, it also has a role buying new facilities and disposing of others.

"Remember, the ASMs are geared up to be constantly looking for efficiencies now," says Markey. "We're having regular conversations with directors of finance at the CCGs about different ways of doing things." That, says Markey, includes more logical discussions about new facilities acquisition, with FM directly involved. 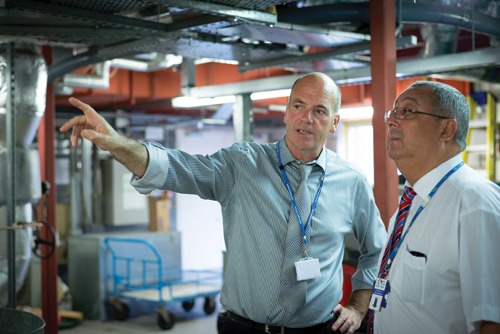 When his restructuring has been seen to deliver, Markey hopes that the secretary of state will consider giving NHS Property Services a wider brief. Successful partnership activity in Merseyside has already led to an approach from another NHS organisation - its estates department outsourced entirely - asking whether NHS Property Services could take it over.

And the newly restructured business should also lead to more career development opportunities and apprenticeships.

"An FM business of the size we are has so many opportunities for engineers, carpenters, cleaners, caterers. As we bring our asset management and FM businesses together, I don't want FM looked down on. FM has every right to be seen as the professional service it is, and there's a huge opportunity for people to find employment and careers in what we are doing here."

The end of working to annual budgets will have a significant effect, says Markey. Conversations about the potential of specific facilities projects will now be seen through to their logical conclusions, all part of concentrating FM spend on buildings with long-term capacity. The impact, for example, of a decision to cut specialist lift engineering jobs will now trigger a conversation between CCG commissioners and local NHS Property Services personnel about the viability of such a decision and its impact - conversations giving FM a voice within the NHS for the first time.

"What really annoys our people delivering the service locally is when they're not listened to. But now, for the first time, they have a voice; if our employees are better engaged they'll do a better job, and ultimately our patients' experience will improve. All this while we're reducing waste and inefficiencies. You can't help but be motivated by that."

Indeed, Markey's enthusiasm for his work is infectious.

"All my business life I've been judged on the delivery of the profit my activities derive," he says. "Here, everything I do is measured by the savings I create - the money I can give to patients. That makes motivating my staff easy.

"The opportunities that we're creating through the consolidation of this business are vast. This is cutting-edge, and if we get it right we could have a substantial effect on the FM market. There is a lot to play for here." 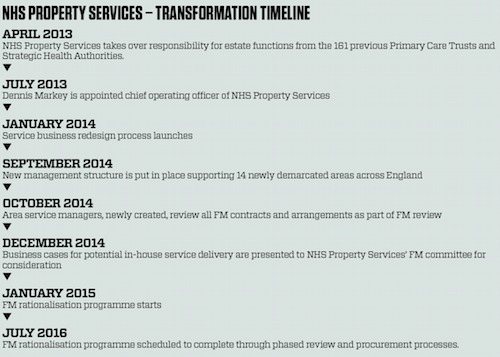