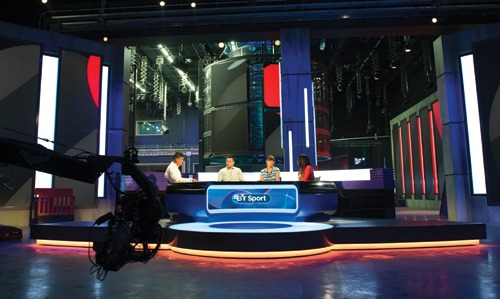 When BT Sport moved into the former Olympic International Broadcast Centre in Stratford, staff at BT Facilities Services had to deal with supporting live TV studios as major media complex redevelopment work carried on around them. Jamie Harris reports.

On the edge
Here East project

A day as a facilities manager rarely passes by without the odd unexpected problem cropping up.

But moving into unchartered territory, for example by supporting a new TV channel launch from a building in the middle of a building site? That presented BT Facilities Services (BTFS) with an entirely different set of challenges.

The variety of sites served by BTFS is unrivalled, ranging from the BT Tower in central London to its unmanned telephone exchanges across the Scottish Highlands (see ‘On the edge’, FM World 25 September 2014). But a TV studio in London's former Olympic Park  presented a new kind of FM adventure - one with just three months' preparation time.

A rush for moving pictures

BT, the official communications services provider at the London 2012 Olympic and Paralympic Games, moved into Broadcast Centre - the former Olympic International Broadcast Centre on the Queen Elizabeth Olympic Park - in 2013. It's one of three buildings in a developing media production complex now known as Here East.

BT was about to launch BT Sport, underpinned by a £246 million-a-season deal to show live Barclays Premier League matches from August 2013 alongside a raft of other live content and studio-based shows.

"The FM team came on site on 1 May (2013), and on 1 August we went live on air," explains Andrew Vizor, the client services lead at BTFS who has overseen the provision of FM services at Stratford. "We had our first group of people moving into the building to start work at the beginning of July."

The speed of the studio build provided a number of logistical issues. The park was still closed, and Here East did not even have a postcode. There was only one entrance for deliveries, and no public transport connections through the park.

Indeed, BT Sport's earlier-than-expected opening pushed forward the opening of the Olympic Park. It also contributed to the split of the park into two sections; the north of the park re-opening to the public in July 2013, nine months before the southern section was ready. The FM team was on site throughout construction, and it continues to be involved in expansion and development plans today.

Although the prospect of FM informing the work of designers is still an ideal the industry aspires to, BT Sport and BTFS were able to use the speed of construction to full advantage.

"We recruited our maintenance team to be here (during construction), because it's very valuable when you're handed a building over to know, for example, that if I lift this floor up [in one of the green rooms], there's a track running across it to where the power is connected."

This close working enabled Vizor to keep the site compliant as construction continued, and also enabled building plans to be amended to the benefit of the FM team. Important space requirements not specified at the outset, such as storage space for drinking water and toilet paper, were included in later plans. 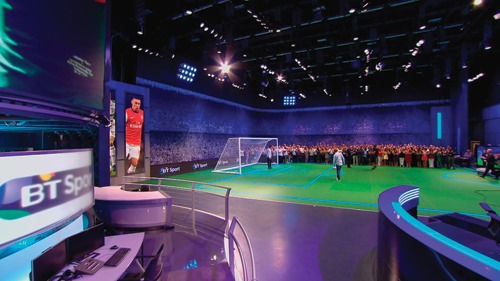 Vizor and his FM team found that they also had to build up a working relationship with a number of freelance workers and external TV production companies, as well as Olympic Park management.

As one of the first organisations on site after the games, BT Sport was party to the park's security meetings.

"It was deemed one of the highest criminal areas for the police. We were part of that [security] to make sure that the equipment in this building was protected."

BTFS has since brought the security function in-house (from Securitas). The officers who now oversee access control and CCTV monitoring at the studios became the first in-house security officers employed by BTFS.

"When we were doing the construction and people were in the building, we had no access control. But we had security officers and we needed people to wear their passes. In time, every single door will have access control."

Vizor was also keen to ensure good communication with BT Sport's studio and production teams. BTFS also provides the FM function for Broadcast Centre's other tenants, a number of external TV production companies that work on site to produce programming with BT Sport, including Sunset & Vine, Boomerang and Timeline TV. BT Sport's on-site FM, Theo Häusler,   has to liaise between many  different groups, sometimes external to BT, on a daily basis.

"They need to tell us when they're on air, as the procedures are different," says Vizor.

When studios are on-air, fire alarms are required to be silenced and flashing lights used to notify staff of the fire. The evacuation process also differs; the last people to leave the site will be those in the main control room, where a final decision is made on which pre-recorded loops are to be broadcast while the building is evacuated.

And there have already been one or two scares, says Vizor. "We've had two World War II bomb scares. Because of the construction around here, they found two unexploded German bombs and they had to evacuate the building because of it."

The science of cleaning

"We had to be very scientific about how long it takes to vacuum a specific carpet, how long to clean a dressing room, clean a studio [or] a green room. By doing those calculations we got the minutes, and after doing the minutes we got the people."

Häusler's FM team consists of 28 staff. Vizor says he was careful to be strict about what areas the FM team would or would not be expected to support.

As the building has expanded, "we might expand a couple of hundred square metres, and be asked to carry on cleaning it. We measure every minute of every day, and every inch of this building, so that we could provide a five-star service, but we don't have the luxury of anything additional without increasing the size of the team."

"In the FM world that's what you do. You always say, 'I'll see what I can do', or 'I'll try to stretch it' - whereas here we're pretty much running at capacity already."

Because of the demands on the studio, the housekeeping service operates 24 hours a day.

"We need to know when the shows will be on, when the guests are coming and when rehearsals take place," says Vizor. "We've got daytime, evening and overnight housekeepers to clean when it is quietest."

Following the Olympic legacy plan, as devised by the London Legacy Development Corporation (LLDC), BTFS had to hire locally.

"We hired one housekeeper from a Hackney Council unemployment day. He worked with us for a year; the council was really happy that he was progressing in his life.

"We've had very little turnover, and we've tried to promote. One cleaner who studied photography started here cleaning the dressing rooms. Six months later he got a job as a runner for one of the production companies." 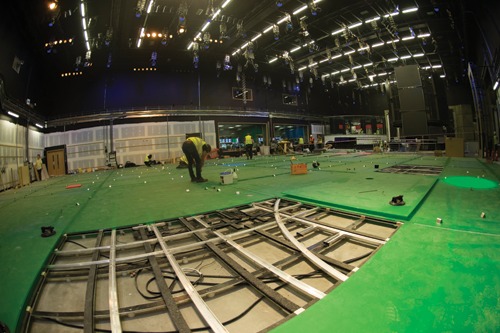 BT Sport's studio houses an LED-lit floor to recreate a full sized football or rugby pitch as well as courts for various other sports such as tennis and basketball.

The floor's lights can be adapted to show lines on a football pitch, rugby pitch and tennis court among other things. "It's a tool, not a gimmick - it's used to very good advantage in explaining the technical aspects of a sport."

Each floor panel requires eight people to lift and change a light fitting. And cleaning it proved more troublesome than first envisaged. Before the facility went live, the air conditioning units used to keep dust out of the studios were not in use.

"The glass floor was muddy from all the building work, almost like a real football field. We tried to hose down the glass floor, but we just left piles of mud everywhere. We tried chemicals, but in the end we were cleaning it with microfibre mops and water for six hours."

Anyone touching the studio desks tended to leave fingermarks.

"Then, somebody accidentally took a cloth with water to it and it worked. Now the desks are only ever cleaned with water, because chemicals leave streaks."

The TV studio was operating on a construction site, so inevitably Vizor had to deal with issues as they confronted him.

One such issue was that the building had been initially fitted out for the Olympics - "and in the summer you have no need for heating; so there was no heating in the building. Getting that organised was a lot of work."

"All the temperature adjustments had to be done manually, by hand, by crawling around to adjust them. It was very much a primitive system at first; we had to adapt our engineers to it. We didn't have the choice then. But our engineers were truly fantastic."

As green as the park

Since those early days, a BMS system has been installed, and the building connected up to district heating (the park's energy centre is run by Cofely).

BT wanted the studio to be operated in as sustainable a way as possible. The LLDC's Olympic legacy set out to transform Stratford into a world-class, sustainable and thriving neighbourhood. This tied in with BT's sustainability ethos.

"We had requirements around legacy, which could work around what we wanted to do. For all the construction and beyond, for example, we had to give them a detailed waste management strategy," says Vizor.

"BT is very strict about waste management - we want to reduce our waste to landfill completely. We've had to educate the building's users, but a BT building is very easy to educate as we all work for the one employer.

"This building has about 30 per cent BT people. The rest are either freelancers or with TV production companies. They came in with different cultures and different expectations."

BT Sport's studio teams use up to 50 kg of batteries for its radio microphones every quarter.

The studios won't take the risk of batteries dying while the studio is live on air, so each microphone battery pack, which uses AA batteries, is replaced after each use with the only slightly used batteries saved for use during rehearsals.

Incredibly, more than 20 per cent of all document printing across the BT estate comes from BT Sport's document printers in Broadcast Centre.

"Printing scripts is a massive part of every day here," says Vizor, "so we need to make sure we've got paper stacks and toner replacements always available."

In setting up the facility, Vizor followed BT's policy of reusing desks, chairs and other furniture from the BT estate, recycling kitchen fittings and cabinets. "Instead of spending up to £50,000 on furnishings, the total came to around £800 in transportation costs,"says Vizor.

Next season, BT Sport is the exclusive UK broadcaster of the UEFA Champions League and UEFA Europa League. In preparation,another 80 people have moved into the production offices. A new floor has been added and new studio is also being completed.

As BT Sport evolves, so too will the requirements of the BTFS team on site. BT's foray into broadcasting has been celebrated by critics. Behind the scenes, it appears to be a similar story. 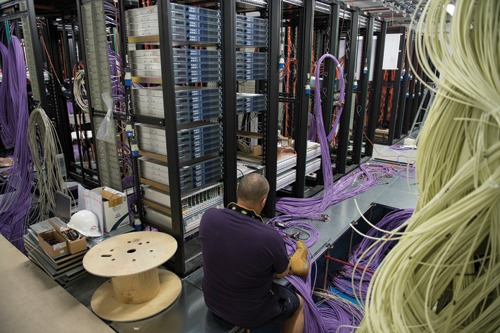