Tri it and see? 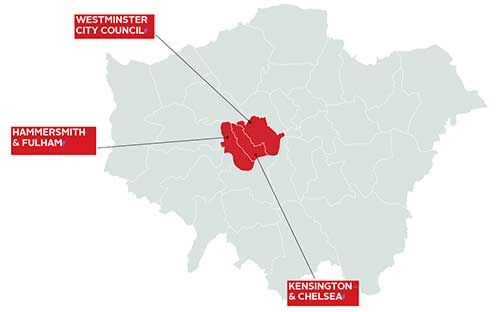 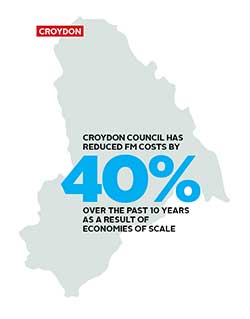 The forthcoming general election will see the usual jockeying over finances as the various parties set out their plans for the next five years, should they be elected.

Yet the arguments are not so much around levels of spending as about which areas will be least affected by savage cuts that are likely to continue regardless of the result of 7 May.

Local authorities have been particularly hard-hit by the cuts in public spending over recent years, coupled with freezes in council tax, forcing a greater focus on operational efficiency. For many, this has seen a re-evaluation of how authorities are run and managed, including the delivery of facilities management services as part of a broader approach that questions traditional ways of operating.

The most radical initiative remains the Tri-borough agreement, under which Hammersmith & Fulham Council, the Royal Borough of Kensington and Chelsea, and Westminster City Council partnered with Amey to combine a number of services, which current estimates suggest will save £43 million a year by 2015-16.

Much of the initial impetus stemmed from Glenn Woodhead, currently framework development manager at Royal Borough of Kensington and Chelsea and previously assistant director of building operations at Westminster City Council.

"At Westminster we originally went out to market, worked out of single services, looking for best value and for savings," he recalls. "We had some services such as cleaning out on third or fourth generation, but the amount of savings that were coming were limited. We could prove best price but it didn't take the services any further forward. At some point there comes a point where you can't go any further."

The shared services contract has now been running for around 18 months, he says, and has entered what Woodhead terms the "contract management" phase. "It's a core piece of work which the Link - or the client function - has to undertake in making sure that the contract is doing exactly what it says and is fit for purpose," he says. In reality, this has meant moving away from more financial-based KPIs, which are less relevant in a fixed-price contract, and towards metrics around performance.

Another focus has been on explaining the new arrangement to different parts of the authority. "Some people have been more attuned to what an outsourced contract is, but for others it's been a new experience, and we've had to do a lot of work around understanding what the changes are," he adds. "We're not going to get the level of savings we've put up by doing things in the same way, so there has been a lot of educating the user-base around what this contract is for, and to define the objectives."

There have been practical lessons for Amey too, says Iain Chalmers, business director for London Boroughs, particularly around some of the more public-facing aspects.

"When you're looking across the estate, people's needs can be significantly different to anything it might say in a black-and-white service matrix," he says. "If we have a broken front door at Kensington Town Hall we can put another security guard on it and monitor it through CCTV. But in a children's home or a home with vulnerable adults in it, it's important that it's dealt with immediately. One of the lessons I have learned is that, although we're dealing with three councils, we're actually working with a number of departments which themselves have customers with very significant needs and which the FM community has a direct impact on."

Other authorities are also interested in the idea, he adds - the framework agreement means any London borough can buy any of the services provided by Amey through a standard process without the need to tender - and the London Borough of Camden also joined the grouping in January 2015, in a £10 million total facilities management contract. Flexibility is essential in such arrangements, adds Chalmers, ensuring that contracts can evolve over time.

"If we think about day one of the contract and delivering the same thing in year five, then from a service provider point of view we're on to a loser," he says.

Other authorities are also making efforts to consolidate their FM services in a single contract and to achieve greater economies of scale, even if this is just confined to the single authority. "Local authorities are driven initially by the need to save cost now," says Andy Fontana, director for local government at Interserve.

"They've done what they can to work with us and other organisations to save cost from their existing frameworks; now they're really hitting the more difficult time, so they need to be a little bit more radical in what they're doing."

One example is Croydon Council, which has reduced FM costs by 40 per cent over the past 10 years as a result of economies of scale, he says, but others have been constrained by existing contracts and may only just be getting to a point where they can take advantage of such arrangements.

At Southwark Council, the emphasis has been on rationalising its own setup, by centralising contracts over a number of years.

"It's taken 10 years to get to this point, but by the end of this year we will have centralised all the budgets, be directly responsible for 300 buildings and providing services to an additional 118, and have reduced the number of suppliers from over 40 to two," says Matthew Hunt, head of corporate facilities management.  A total facilities management contract with Interserve started with its new headquarters and has now spread to a further 40 buildings, he adds. 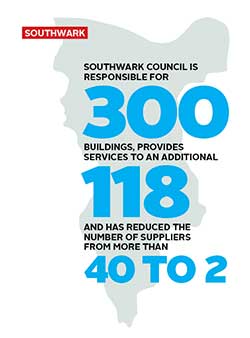 Another approach for some councils has been to free up their in-house team, with the view to it becoming a revenue-generator. Norse Commercial Services grew out of Norfolk County Council, which remains its main shareholder, but about 80 per cent of its work is now for other authorities based around the country, including Medway Council and Norwich City Council, operating as joint ventures with Norse.

"We offer a slightly different model than either in-house or traditional outsourcing," suggests Mike Britch, managing director of Norse Group. "We provide the option of keeping the local authority strategically involved and sharing in the success of that organisation, but bringing in a commercial focus around the delivery of those services."

Suffolk County Council envisaged a similar model when it divested Eastern Facilities Management Solutions four years ago. Here, though, the business initially struggled to establish itself as a commercial operator. "One of the challenges was that all of the people that were part of the organisation when it was completely Suffolk County Council then found themselves in this standalone commercial entity," says Jo Lardent. "But they were public servants and that commercial mindset just wasn't something they had."

A consultant review last year saw a new team, including Lardent, brought in, with a view to growing the client base. "We've won a new contract with Southend Borough Council, and we're currently looking at forming joint ventures with a couple of other local authorities," says Lardent. "But we're also looking to bring private clients into the organisation."

Some authorities are also starting to merge the delivery of hard and soft services, including the provision of IT, says Wilfred Petrie, chief executive of Cofely, which provides a range of services to North East Lincolnshire Council and North Tyneside Council, and recently secured an agreement with Cheshire West and Chester Council.

"The hard, the soft and the facilities management distinction still exists, but you also have more innovative solutions, where they go back to their fundamentals around delivering a certain amount of urban regeneration or improving a certain number of services to schools, and they go out to the market and ask for these bigger solutions," he says.

Yet there is debate over how far such initiatives can go, particularly when it involves more than one authority, as with Tri-borough. Hunt, for one, is wary of the idea of teaming up with other authorities.

"I was engaged in the very early stages of the Tri-borough, and asked if Southwark wanted to put our hat in the ring, and the short answer was no," he says. "In the next two years I'll be starting a very clear review to assess what the options are for our services from 2020 onwards. But it will be from a position of strength, not from a supply-led perspective, where the client doesn't really have a true understanding of what the contract is delivering. That could be one overarching contract, it could be a contract that includes other boroughs, it could be keeping it in two distinct areas, but all of those options will be open for us."

Fontana, meanwhile, believes the one-estate model - examining an authority's entire building portfolio and looking to allocate resources and services as efficiently as possible - will come to the fore after the election.

"That still keeps everything in the possession of the local authority," he says. "It allows them to look at who has estate in their area and might want to share it with other parts of the public sector, be they emergency services, schools or parent support facilities."

But Woodhead believes that any kind of wider initiative such as that deployed under the Tri-borough arrangement at least needs to be seriously considered by authorities.

"With public sector procurement you are duty-bound to go through an options appraisal to start with," he points out. "You start with a long list of options and work your way through to a shortlist and eventually to the option that best suits the organisation. It's now a given that if you're looking to outsource any significant element of FM you would have to consider a shared service and probably a total facilities management model. A few years ago you may have considered it but it would probably have got cut at the first stage; now it's got to be something that's seen as a serious opportunity."

London (Central)
Circa £50,000 per annum depending on experience
Reference
59380
END_OF_DOCUMENT_TOKEN_TO_BE_REPLACED