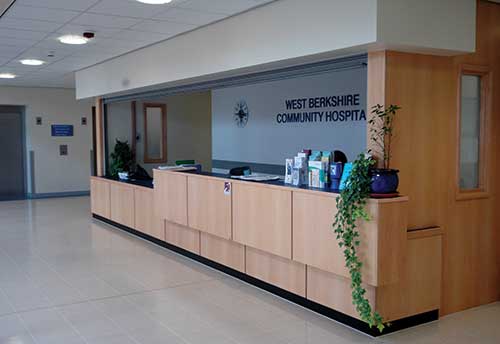 At West Berkshire Community Hospital,  the sharing of day-to-day and project information between the facilities team and its Trust clients  is critical, as Martin Read reports

The story of the West Berkshire Community Hospital began in the late 1990s when a local GP and a vet, unhappy with healthcare facilities available in Newbury at that time, started to lobby for a new hospital.

In promoting the idea to patients, they became the beneficiaries of one of the GP's millionaire patient's wills, the millions they received going in to the setting up of the West Berkshire Community Hospital Trust.

The hospital, set up as a PFI project, was subsequently built on greenfield land between Newbury to its west and Thatcham to the east. Opening in 2004, it was - at the time - the only charitable PFI project in the country.

Today, the 60-bed hospital provides healthcare services to more than 100,000 people in Newbury and its surrounding areas. But in the course of the hospital PFI's first 10 years' operation, much has changed. Jarvis plc had been the original build-and-maintain PFI partner on the project with its FM arm, Jarvis Accommodation Services, providing facilities services. But when Jarvis went into administration in 2010, the then SGP (now Bellrock) was appointed to pick up the pieces. Bellrock is now in the 11th year of its 30-year PFI contract.

Ifor Sheldon has been the on-site facilities contract manager through all of this. A former town councillor with Newbury Council, Sheldon transferred to Bellrock from Jarvis in 2010, together with 42 other facilities staff.

Following the shift to Bellrock, an efficiency review was conducted and some services previously handled internally, including the estates management and night security functions, were outsourced (night portering was deemed inappropriate, so portering was reduced from six to four day-time personnel, with two night security staff employed through a contractor).

Services on site include a minor injuries unit, two day-surgery theatres, a radiology unit, as well as an out-patient department run by the Royal Berkshire Hospital Trust. The hospital is also the base for local community health teams and out-of-hours GP services.

Sheldon is celebrating 10 years in the job, his team providing estates and grounds maintenance, catering, laundry and linen services, cleaning, portering, security, waste and energy management. As with most hospital environments there are multiple customers from the various trusts (see box) to end-users including patients, visitors and clinicians.

West Berks is not the biggest of hospitals, but it is a bright and efficient space and there's a contented air to it. The size of hospital makes it 'just right' in terms of the relationship between the client trust and the operations team. Indeed, the success of its facilities services activity is put down to close communication between Sheldon and other stakeholders on site. Dr Robert Tayton is the Newbury & Thatcham Hospital Building Trust's director with the most routine communication with Sheldon and his on-site FM team.

The West Berkshire Community Hospital has picked up several plaudits. The Patient Environment Action Team audit scored it highest of all community hospitals in Berkshire, while the Care Quality Commission rated the hospital's cleaning and building fabric standard as high. 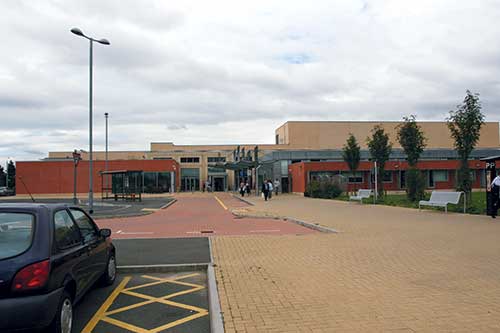 Other projects have included new hard-standing to enable new mobile screening units to be accommodated, and an endoscopy unit.

The recent refurbishments of the café area were undertaken with money from the PFI life cycle fund following agreement among the trust partners. A project to switch all lighting in the hospital to LED is continuing, as is the roofing, painting, cladding and roof-capping work.

For building engineering projects, such as the endoscopy unit completed recently, Sheldon can call on the services of Bellrock's project team based in Leicester.

Sheldon explains: "The Bellrock engineering team in Leicester performs two roles for me. Our project team is frequently appointed by the trust as an independent project manager, but they also supply me with my routine technical support on site as well. On this site we've got a dedicated person, backed with air conditioning engineers. We have people from Leicester come in to provide advice. So when we're monitoring our contractors, such as PES (the local M&E subcontractor), we have a big team behind us."

Redevelopment of the hospital's day surgery unit to allow for the segregation of male and female patients is another project likely to test the partnering relationships between the NHS and its hospital management teams.

Tayton explains that the continuing aim of the Newbury & Thatcham Hospital Building Trust is to provide "anything that will improve the health in any way of the population of people in the Newbury and Thatcsham area."

This can mean improving conditions in the hospital generally, or the addition of an entirely new building such as the £2 million renal dialysis unit currently in the pipeline.

Ideas for how the trust's money could be spent come from all sides, including the hospital staff, and projects that involve trust money can also be part-funded by other partner charities. One recent example saw the Newbury and District Cancer Care Trust invest in refurbishing the hospital's Rainbow Rooms, which allow family members of cancer patients to stay overnight.

Bellrock's Leicester-based project management team was brought in to oversee this as well as many other projects - and it's the relationship between Bellrock's on-site FM team and its project team that is important, says Tayton.

The trust appoints Bellrock to project-manage and liaise with relevant NHS teams on project design and internal fit-out, seeking the planning permissions and awarding contracts for construction and fit-out works.

"In my time here there's always been some form of major project going on," says Tayton. "Some we pay for, some the NHS pays for. It varies. But when we manage these things, we ask Ifor to get the Bellrock project team in. The key to their success is in having frequent meetings."

Tayton points to the recent project to upgrade fire-stopping systems to meet fire regulations. The two trusts, together with Bellrock, agreed to split the cost of the work three ways. It's an example of the constant collaboration between Sheldon, Tayton and other interested parties. Sheldon says: "We had a fire survey and our fire-stopping was deemed inadequate, so in collaboration with the NHS fire officer we conducted a survey of what it would cost to upgrade in our in-patient areas, got a quote from our contractor; agreed it with the two trusts."

Another project came as the result of an NHS survey, which highlighted the potential of voltage optimisation. Hopes are that between five and 8 per cent savings in electricity will now be obtained following the introduction of voltage optimisation and sub-metering equipment across the hospital and in the operating theatres over the Christmas maintenance shutdown period.

Should the renal dialysis unit, an extension to the hospital building, get the go-ahead, then the Building Trust will pay around £1 million, the hospital trust a further £450,000, while another local trust (not operating on site) hopes to add the remainder. 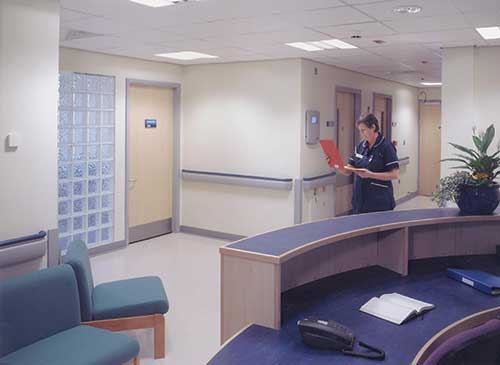 Tayton says: "Over the last four years the Royal Berkshire Healthcare Trust has realised the potential of this hospital and begun to use it more; now our theatre capacity is up to 90 per cent and our outpatient capacity at 95 per cent - the hospital is incredibly heavily used now."

Overall staff churn is low ("It's a nice place to work," says Sheldon), and there's a settled internal facilities team. Sheldon employs a cleaning supervisor and a chef manager for both the public and patient catering service, while his deputy Kenny manages reception and portering.

"The model hasn't changed much," concedes Sheldon. "It's probably as lean as it can get without compromising service."

Sheldon sees plenty of new developments in the pipeline and further reason for maintaining that steady, day-to-day communication stream with the hospital's stakeholders. "It's how we operate," he concludes.

A question of Trusts - three of them

The stakeholders on this site need a bit of explaining: The Newbury & Thatcham Hospital Building Trust was set up to build and maintain the West Berkshire Community Hospital. It continues in the role of special purpose vehicle for this PFI project.

When the latest changes to the NHS were introduced in 2013, management of the hospital was taken over by the local Berkshire Healthcare NHS Foundation Trust (which runs other hospitals in the region).

So, to recap: the Royal Berkshire Hospital Foundation Trust rents space at the West Berkshire Community Hospital from the Berkshire Healthcare Trust, while it is the Newbury & Thatcham Hospital Building Trust that is the PFI partner.