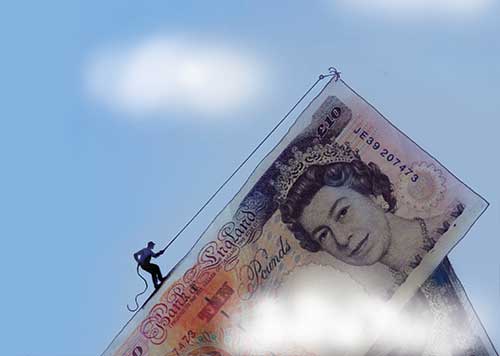 Whether it's a move from in-house to outsourced provider, or to a position based outside of the UK, facilities managers considering such potentially career-defining moves must prepare for the leap they're taking. Kevin Stanley reports.

Steady as she grows in the FM market

The number of FMs employed with total FM providers has fallen slightly from 72 to 68 per cent of all our supply side respondents, and there's been a small increase in those indicating that they worked solely for soft FM service providers and a corresponding decrease in those representing FM consultancy organisations.

We've seen a drop in the number of respondents from service providers working on private finance initiatives (PFI) or public-private partnerships (PPP). These figures are down from a third in 2013 and 26 per cent in 2014 to just one in five.

We've also seen a reduction in the number of in-house FMs responsible for regional or multi-site roles this year, down from 33 and 26 per cent in 2013 and 2014 respectively to just 20 per cent of all in-house respondents. Those responsible for single sites has grown 8 percentage points to 30 per cent of the in-house total.

Responses from in-house FMs in government organisations rose from 11 per cent in 2014 to 14 per cent, while FMs working in the charity sector comprise 10 per cent of the in-house total.

People holding BIFM associate status rose significantly. A third of respondents said this, up from 25 per cent last year, and 20 per cent in 2012.

Those respondents with BIFM member-grade status fell to 46 per cent from 57 per cent. A further 15 per cent hold certified member status.

We've remarked before on how closely the roles of FM and health & safety manager are and, again, membership of the Institution of Occupational Safety & Health (IOSH) - at 37 per cent - remains the other professional body that FMs are most likely to join, in addition to the BIFM. Fourteen per cent said they were members of the Chartered Management Institute (nearly twice the number than in 2013), 14 per cent the Chartered Institute of Building Services Engineers, and 13 per cent the Royal Institution of Chartered Surveyors.

And 1.7 per cent were members of the International Facilities Management Association, down from 4 per cent last year. Some 16 per cent cited membership of bodies outside of our list, including the Royal Institution of Naval Architects, The Royal Town Planning Institute, the Institution of Engineering and Technology, The Institute of Leadership and Management, and the Federation of Small Businesses.

There's been a slight bump in the number of respondents working in London and the South-East. Those regions still account for just over 50 per cent of the total. Most of the response to the poll by region has otherwise stayed constant, albeit there was a fall in those from the North-West (5 per cent, down from 8 per cent). Responses from FMs in Scotland and Northern Ireland remained similar to 2014 at 9.4 per cent. 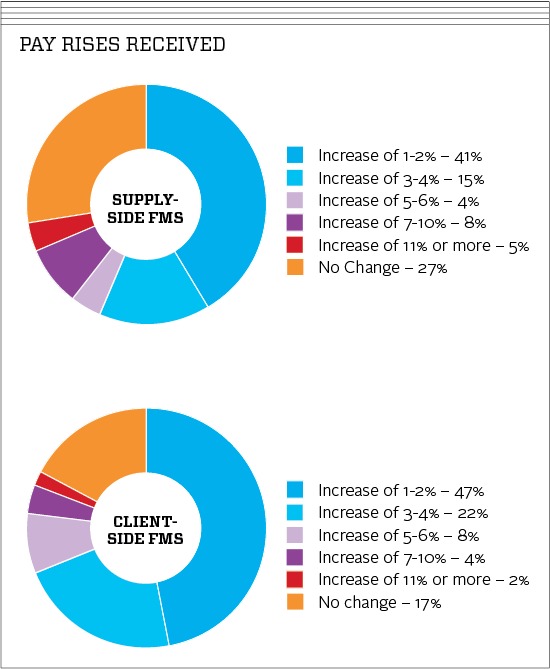 One in five respondents saw a pay freeze this past year, a figure similar to last year's (21.6 per cent), while salary increases of 1 to 2 per cent continue to represent the sizeable plurality of increases received over the past two years. Just under half (44.3 per cent) received such an increase in salary in the past year, albeit that's a figure down on the 36.25 per cent of FMs who had to settle for such an increase last year.

Last year's figures showed more women than men getting more sizeable increases. That trend continues - 9 per cent of female respondents saw a pay rise of 5-6 per cent compared with just 3.7 per cent of men.

Expectations of salary rises remain conservative; 45 per cent of all those we asked expect a rise of only 1-2 per cent in their next pay review, with a further 21 per cent estimating a boost of 3 to 4 per cent. Nineteen per cent expect no change at all.

In-house FMs appear more optimistic; 26 per cent expect a rise of 3-4 per cent compared with just 11 per cent of those on the supply-side.

Despite anecdotal evidence of a recovering economy there is little improvement in terms of salary. Those who said they earned under £25,000 are pessimistic about future rises; 36 per cent expected no change, and 35 per cent in this salary range expected a rise of just 2 per cent.

Most respondents (82 per cent) have a pension plan as part of their remuneration, and half have a health plan. Performance-related bonuses are received by 48 per cent, and 19 per cent are in a profit-share or share-save scheme. Petrol allowances remain at 18 per cent - more FMs at outsourced providers get that perk.

London (Central)
Circa £50,000 per annum depending on experience
Reference
59380
END_OF_DOCUMENT_TOKEN_TO_BE_REPLACED