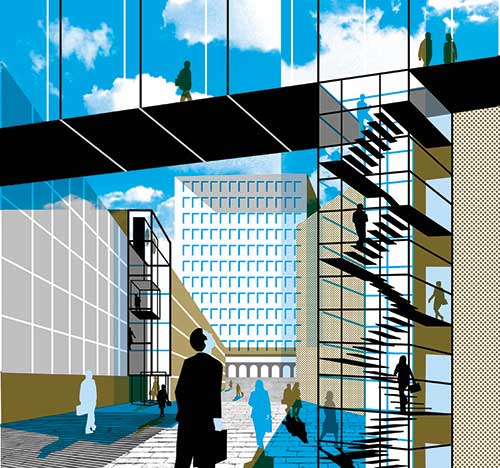 When weighing up whether to stay with an employer or strike out elsewhere, facilities managers are increasingly likely to rank their desire to challenge themselves ahead of the size of their pay and bonus packages.

Steady as she grows in the FM market

About one in five FMs reported to us that they had been promoted over the past 12 months.

That's nothing out of the ordinary compared with past years - but we can report an increase in the number of FMs promoted over a two-year period - up from 14 to 17.3 per cent year on year. A further 11 per cent received their last promotion four years ago. These responses are consistent for both in-house and supply-side facilities managers, and across genders.

Given the fairly static numbers in terms of pay rises, it's interesting to report how FMs are becoming less concerned about pay than in previous years. By 'less concerned', let's be clear - pay is still the most important factor when FMs weigh up a job's potential. But in the years to 2013, up to 70 per cent of respondents cited salary as the most important reason for choosing a job. We saw that start to change last year, and in this year's survey we saw only 60 per cent indicate pay as the main determinant of a job's value.

Career prospects and job security (41 and 29 per cent respectively) continue to prove important, but that pay figure represents a sizeable drop, one made all the more interesting when you factor in that FMs are putting more emphasis on the appeal of more 'challenging work' (up 6 percentage points year on year).

Health cover (3 per cent) and fringe benefits (1 per cent) are not enough to entice an FM into a new role, but respondents continue to value location (27 per cent) a good working environment, and strong relationships with their colleagues (17 per cent).

Broadly a fifth of respondents have been with their current employer for between two and four years - the largest proportion of respondents. While this figure is up substantially in comparison with previous surveys, those reporting 4-6 years, 6-9 years or longer service has remained constant. It's at the lower end where the difference is seen. Those reporting just a year or less with their current employer have increased by a factor of four to close to 15 per cent of all respondents. What remains true to previous results is that men tend to stay with one employer for longer - 16 per cent have been with their organisation for 4-6 years (compared with 12 per cent of female respondents).

These figures suggest a return to the mobility of the FM workforce we reported back in 2013, when a quarter of respondents told us they had been with their employers for two years or less. 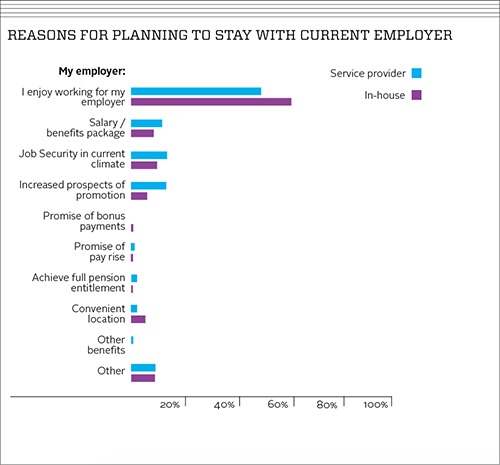 At the other end of the scale, 14 per cent are planning for the long term, expecting to serve with their current organisation for the next seven years or longer. That, though, is a reduction on previous years (it was 17 per cent in 2014).

Concerns about pay, benefits and career prospects are the main reasons cited by FMs for wishing to leave their current employer over the next 12 months. One in four cited unhappiness with pay, and another quarter put lack of career opportunities as their primary reason for getting itchy feet. In fact, these are slightly lower figures than we've seen in recent years, with more in-house FMs expressing their concern over both issues. Lack of management support is also seen as a motivating factor (8 per cent, marginally up on last year), but it's notable just how little the stress of the job plays in these decisions (only 2 per cent mentioned it). Redundancy remains the reason of departure for 4 per cent of our sample.

That perceived lack of career opportunities is also the key driver for those who've actually made the leap to another employer in the last year. One in four cited a lack of career opportunities as the primary reason, a figure up from one in five just 12 months ago. A further 19 per cent left their previous employer because of redundancy, while at the other end of the spectrum 10 per cent were head-hunted into their role.

Factors such as the number of working hours (3 per cent), lack of management support (4 per cent), and concerns about pay and benefits (6 per cent), also registered as reasons for leaving.

Respondents happy to stay with their employer for more than a year said that general enjoyment of the role was the main reason. One in 10 cited job security, down from the 16 per cent citing it last year and the 22 per cent in 2013 - figures suggesting a more confident market.

Another 11 per cent of respondents told us they were staying because of the increased prospect of an internal promotion. And again, salary is rarely a reason for staying put - 9 per cent or our sample cited it.

For those recently moved to new employment, more than a quarter of respondents (28 per cent) cited a fresh challenge as the main reason. Better long-term prospects (15 per cent) and an improved salary or benefits package (11 per cent) were also key drivers, while a position of seniority (11 per cent) was also popular. Just one in 20 moved because of their new employer's perceived market reputation.

London (Central)
Circa £50,000 per annum depending on experience
Reference
59380
END_OF_DOCUMENT_TOKEN_TO_BE_REPLACED