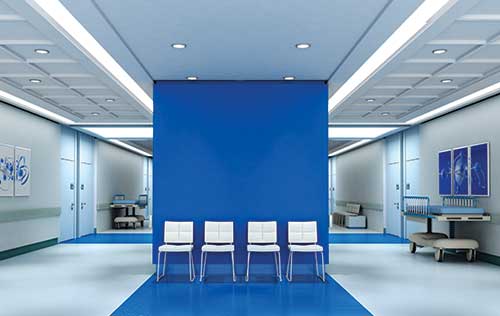 Research from as far back as 2000 by academics Bob Grimshaw and George Cairns suggested that FM could become obsolete in the new virtual world.

And indeed, in the world outside of the NHS - the UK's largest employer - the modus operandi for business has changed. Remote working and the satisfying of customer demands online are fast eclipsing the personal touch in most commercial sectors.

What, then, for healthcare? Telehealth is the term for when patients self-manage and monitor their own health at home through a multitude of devices, with information fed back to clinicians to enable monitoring and diagnosis without the patient needing to attend a clinic.

Telecare describes patients living independently in their homes supported by various sensors and alarms linked back to monitoring stations. A look at future scenarios extrapolated from available data shows that with both telehealth and telecare - T&T - the only certainties for facilities management in health care are that:

Developments in information technology were a driver for the establishment of FM in the 1970s. They remain relevant today, with considerable uncertainty as to the implications for real estate holdings and their management.

Although the Royal Society of Medicine has supported the Journal of Telemedicine and Telecare since 1995, the potential ramifications for estates and FM have not been studied enough. As far as the authors could ascertain, no literature available considers T&T's effects on property and facilities. Similarly, property and facilities studies offer little about the implications of T&T for the NHS.

This study looks at six property scenarios, finding that current NHS predictions do not consider how T&T might affect FM and estates (EFM).

In developing them, we have introduced potential lessons from other customer-critical sectors such as retail and hospitality.

This paper is intentionally speculative and scenarios are not intended as forecasts - although they have been tested on a small sample of estates and FM staff in a selected study. 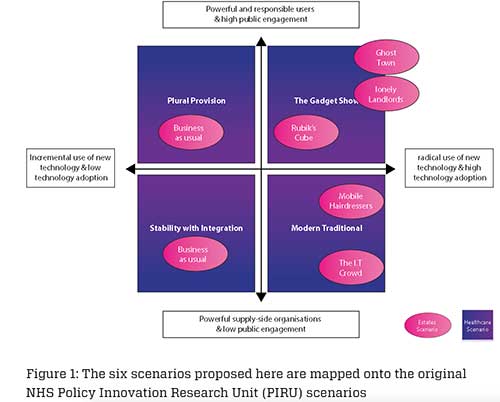 As with retail, so with healthcare?

The NHS's Policy Innovation Research Unit (PIRU) developed four scenarios for how technology could change the NHS by 2030 (by James Barlow of Imperial College Business School and management consultant Chris Evennett, 2013). (The six scenarios proposed here are mapped onto the original PIRU scenarios in Figure 1.)

A significant variable in these scenarios is the speed of public acceptance of new technology. The authors could not find studies of this in the health sector, so examined recent trends in general consumer sectors.

Just nine years ago, only 37.4 per cent of people in the US shopped online. Fast-forward four years and a 2006 report found that in the UK only 5 per cent had negative feelings about online shopping - 55 per cent did most of their shopping online. This is increasingly affecting retail property, with physical locations either being promoted as retail 'experiences' or dismissed as 'Amazon showcase'.

Like retail, the NHS provides a service to the public in locations, but parallels may be better drawn more with hospitality than retail. Technology has enhanced the hospitality industry. Although the recession has seen pub closures, hotels have rapidly embraced technology. In I999, only 4 per cent of hotel reservations were made online. Today, online booking systems are ubiquitous. Unlike modern retail, hotel services are always experienced in a physical asset. US academic Mary Jo Bitner has grouped hospitals, health clinics and hotels into the same type of 'servicescape'.

Evennett and Barlow reckon community health centres will disappear. Could T&T render physical assets redundant, leaving NHS estates organisations with no estate to manage and questioning their very existence? T&T is commoditising healthcare. In other industries where this has happened, property is classed as a burden. Health policy analyst Roy Lilley has predicted the NHS will look very similar to banking and travel agencies and also suggests that NHS property will disappear.

Alternatively, Bitner's servicescape theory holds the physical surroundings as important when the service is produced and consumed simultaneously. There will always be patients who need physical assets for their care such as the terminally ill, says Liz Mear, chief executive of the North West Coast Academic Heath Science Network and Dr Tristan Elkin (lead GP for digital health in Liverpool).

Rather than make the estate redundant, T&T may simply reduce the amount needed. GP surgeries and hospitals are both cited to experience reductions in visits in some pilot studies. In this scenario there is more vacant estate; estates and FM providers will need to alter the way services are delivered.

Ten years ago the Healthcare Informatics Journal compared the rapid adoption of technology to the Industrial Revolution. Noting that technology has catalysed a reduction in property in other industries, it predicted that healthcare would follow suit.

Another survey found that a combination of the recession, adherence to outdated store concepts and technology rendered many staff redundant - 15,000 shops in the UK closed between 2000 and 2009, followed by another l0,000 between 2010 and 2011. But in 2013 the head of retail research at commercial property consultant CBRE stressed that the demise of retail property because of online shopping has been exaggerated. The British Council of Shopping Centres (BCSC) regards online retailing as simply an addition to the physical landscape.

Telehealth and telecare may change and 'scramble' the type of space that NHS estates and FM organisations require to deliver health services. In retail outlets, spatial flexibility is already paramount. Half the participants in the BCSC study predict that there would be more flexible space in the next five to 10 years with a need for more experience-led environments to compete with online retailing.

John Cruickshank's 2010 'Healthcare without walls' paper stresses the importance of T&T monitoring centres. A monitoring centre dominates an image produced by Ofcom in 2008, which predicted how healthcare would look in the next 10 to 20 years - a prediction that has come true in the case of the 2011 Whole Systems Demonstrator trial (WSDT) and other more recent pilot studies. Cruickshank suggests that mobile health would allow NHS clinical staff to work anytime, at any place, and with anybody, rather than needing to access health records with a static desktop PC.

Outside the NHS, a common theme is that the FM role needs to change to become more logistically minded and flexible as a result of the increasing use of technology in the workplace. Grimshaw and Cairns suggest FM could become obsolete as a result of the increased use of technology and reduced requirement for estates, and FM should become "totally integrated with the new virtual physically dispersed core business because staff will still need support they once had in a physical space".

The 'Mobile hairdressers' scenario explores the equivalent for healthcare. Will estates and facilities management in the sector become an increasingly mobile and remote service in line with the way in which care is provided? 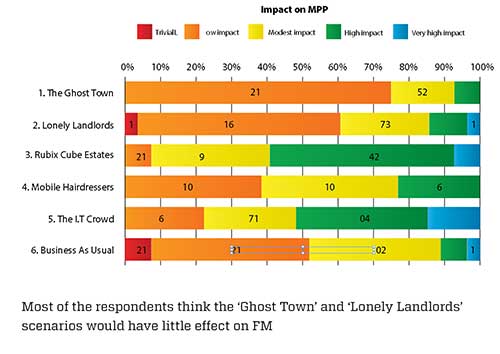 This scenario suggests a considerable shift in service provision for FM. It seems particularly plausible in PIRU's 'modern traditional' scenario, whereby adoption of technology is high and supply-side organisations are powerful. New telehealth and telecare provider organisations could drive NHS FM and estates to become integrated with, and a component of, IT.

In some ways the scenario recalls the predictions around the turn of the millennium that FM would develop into resource management, with a shift in focus from facilities to ICT.

Information technology research firm Gartner Group (cited by Grimshaw and Cairns) predicted that a third of all organisations in the US would have an RM role by 2003. The purpose of that role was seen as "ensuring the functionality of the work environment by integrating people, place, process and technology". Clearly, those predictions were exaggerated - but for how long?

NHS Property Services state that information management and technology is outside their remit. Is that shortsighted? In 2013 the Kings Fund's 'Time to think differently' paper debated whether NHS buildings are an obstacle or an opportunity. Estates and FM in the NHS has been too focused on maintaining the estate rather than exploiting IT to support commissioners' plans, say some authorities.

PIRU's 'plural provision' and 'stability with integration' scenarios see adoption of technology as low or non-existent, thus unlikely to have much impact on estates and FM.

Although futurist Ian Morrison champions property and IT working together to improve organisational performance in his 'Bricks and Clicks' paper, he stresses that healthcare organisations tend to over-emphasise technology and says 'we need to pay as much attention to the built environment (bricks) as we do to the IT infrastructure (clicks)'.

Some authorities that the authors studied believe technology will change the way space is used, but the views from those canvassed suggest many think the physical infrastructure will remain essentially the same.

Other experts regard making predictions about technology unreliable because its use is either exaggerated or underestimated. This can result in scepticism - and NHS staff are generally sceptical when it comes to innovations.

We adopted a mixed-methods approach to exploring the scenarios through questionnaires and semi-structured interviews, completing the interviews after a questionnaire to understand the reasoning behind people's perceptions and to strengthen our conclusions by attaching meaning to the quantitative data. We subsequently used the interview transcripts to re-focus the questionnaire analysis.

Respondents rated the impact and likelihood of each of the six scenarios on a scale of 1-5. We included free text questions to identify whether respondents were aware of T&T and if they understood the difference between the two terms.

The Rubik's Cube scenario was thought most likely, followed by the IT Crowd. Generally, respondents think T&T will affect the NHS but they steer away from the more extreme scenarios.

Respondents think these two scenarios would have most impact on the organisation and job roles. The Ghost Town hypothesis was seen as unlikely - it was assumed that there will always be a need for buildings to provide some aspects of healthcare. And perhaps because of that, most respondents think the Ghost Town and Lonely Landlords scenarios will have little impact on FM. Assessment of likelihood appears to influence assessment of impact and may point to a need to clarify the labels used for each scenario.

We analysed the interview transcripts for themes. Ultimately, 51 codes reduced to 12 themes, all of which seem to reflect a lack of awareness of T&T. Lack of awareness and lack of understanding may also be linked with lack of involvement.

The study is limited in scope and the labels on some scenarios may have been 'scarier' than others and perhaps need to be evaluated with care.

We cannot make definitive claims based on such a brief sketch, but results suggest that using the scenarios provided a route to surface very different background understandings of the threat and opportunities posed by T&T.