Getting with the programme 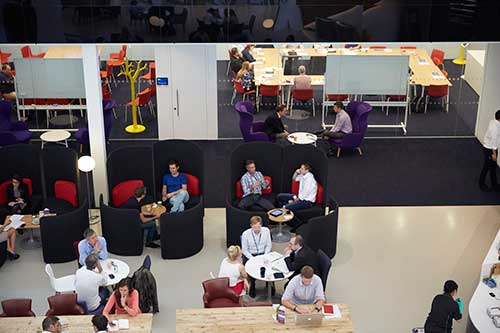 Sky's facilities management team is working to match the 'Believe in Better' slogan in the way it works on behalf of the company's employees, as Jamie Harris reports.

Media organisation Sky - providers of broadcasting, broadband and telephone services - adopted the slogan Believe in Better to market its services.

But the phrase has taken on another dimension as its service team constantly seek to better its own support services.

Sky's aim is to attract the best people in the industry and create an environment in which their staff can thrive. The broadcaster is present across five European countries, and headquartered in offices at Osterley, West London. And what's evident upon arrival on site is Sky's sheer ambition. Two large-scale buildings are under construction; 'Sky Central' is set to be the site's new corporate centre, while a 800-space car park is taking shape nearby.

Also evident is the ambition of the FM team, operated by Mitie, in switching its emphasis from serving the building to serving its customers - Sky's internal staff. Mitie is responsible for services including fabric maintenance, engineering maintenance and catering.

Green's vision dates from his experience of the buzz created by 70,000 volunteers three years ago at the London Olympics.

"I saw the games-maker volunteers create this culture, which really worked," says Green, "So we set ourselves a challenge - to produce our own version of the games-makers to create a service environment."

The Sky 'games-makers' comprise more than 850 Mitie staff looking after 50 of Sky's buildings across the UK - 1.86 million sq ft of property space.

The team gives a "human face to FM", continues Green. "We focus on the service first, and the building second."

Green describes the proactive mindset he wants his service staff to have, one in which they always see the need for customer service through the client's eyes.

Green is an advocate of foreseeing problems and taking preventative action. "If the problems don't arise, we shouldn't need a helpdesk."

By way of example, on 1 July, the UK saw the hottest July day ever recorded. Temperatures hit 36.7°C in some parts of the country. The service team envisaged potential problems with its cooling equipment, and the helpdesk was expecting complaints. In advance, the team hired temporary air conditioning units and air handling units, to be moved into place should they be required. But in the end, no problems arose that day.

The level of customer service sought sees Sky and Mitie look to recruit people with a "strong service or hospitality background".

Conrad Dean, Mitie's account director for its Sky contract, explains that Mitie is focused on "how people work, and how we [Mitie] need to anticipate the evolution of their needs from a workplace perspective". 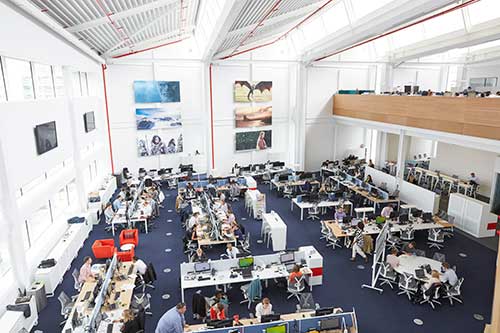 A buzz about town

Sky's Osterley campus is split into individual buildings, or clusters of buildings, each led by area general managers who oversee scheduled services and can then delegate reactive work to Mitie staff on site.

The site feels like an American college campus - outdoor areas are scattered with deckchairs (seasonal extras, admittedly), green space is delicately maintained; as staff sit for their lunch the outdoor plaza areas are buzzing with activity, with a camera crew to be seen filming new promotional material.

Inside, open, high-ceilinged workspaces, hot desks, meeting booths and breakout areas (complete with barista-staffed on-site coffee bars) are strategically placed to 'optimise' the working environment. It's an ongoing effort: as we meet, the service team is trialling meeting 'pods' with soundproof glass doors. Elsewhere, an on-site fitness centre has recently opened, one which only closes for four hours each day in order for the shower facilities to be steam-cleaned. The building also boasts a hairdressing and beauty salon as well as bicycle parking facilities (complete with a branch of Halfords for any commuting repairs).

For those who don't cycle to work, there are thirteen shuttle buses to take staff on and off site. The complex's relative isolation from central London is thus offset by small, but significant steps to help staff achieve a better work-life balance.

The integration between Sky's 20-strong core service team and Mitie is key to improving the service offering, argues Dean. The broadcaster surveys its employees every six months to ensure that they are being served to the best of its ability, while Mitie surveys the service staff. Innovations ensue: Dean and his management team were told that Sky employees wanted more social events with other departments. As a result, the service team hosted a spring barbecue and rounders event. Dean also describes a health and safety initiative in which Mitie staff starred in educational videos to depict a safe working environment.

"It turned into a competition," says Dean, "they really felt a part of it."

Brewing up a treat

As for catering, four restaurant and cafe choices are available on site. Each is subsidised by Sky to make hot meals affordable to staff. A variety of cuisines is offered.

What was previously a noodle bar has been adapted in response to Sky personnel's requests and now specialises in burgers. Dean expects that in six months time something completely different could be on offer. Another restaurant (a bistro in the new 'Hub' building) offers table service and hot meals. Variety of choice is clearly important.

Each food outlet, as well as the coffee kiosks scattered across the campus, are operated by Gather & Gather, Mitie's own catering business. Staff can purchase a subsidised Americano for 25p, with Gather & Gather estimating that a million coffees are brewed on site each year.

And the quality of that coffee is also of importance to Sky's service team.

"We have the UK's number one young barista and the 11th best barista on site," claims Green, referring to the company's detailed recruitment policy.

As for service, says Dean : "I am greeted by the same face each morning; the same barista knows what I want before I tell them." 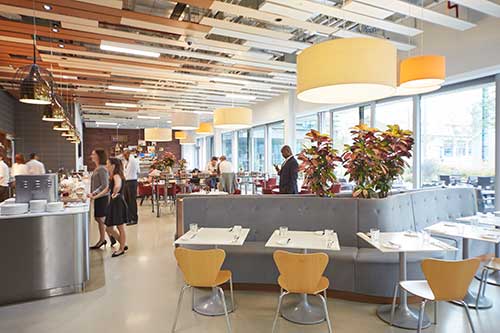 The Osterley complex has a combined cooling, heating and power system, installed four years ago, in addition to a wind turbine. The waste wood-chip CCHP plant produces 1 megawatts of electricity and 3 MW of heat, while the wind turbine produces 120 kilowatts.

On the wall behind the service team, large screens indicating power generation light up, giving the team instant information about its energy performance.

Another recently opened building on the Osterley complex, The Sky Studios Building, which houses the Sky Academy, holds training rooms, informal meeting areas, a roof terrace restaurant and a mock studio for schoolchildren of varying ages to visit and practise presenting, directing and producing. A free trip to its Skills Studios is offered routinely for students.

The building was designed to achieve a BREEAM Excellent rating, thus helping towards Sky's target to reduce gross CO2 emissions, relative to revenue (tonnes/£million) by half by 2020, against a 2008/09 baseline. The most recently reported figures, taken in 2013/14, indicate a 40 per cent reduction.

Further commitment to sustainability has seen Sky push out an internal campaign to promote recycling and waste reduction opportunities, targeting 100 per cent recycled food waste in Osterley through composting and anaerobic digestion.

The forks and knives used across the campus themselves actually as food waste, being made from potato starch.

Sky has also encountered a shortage of parking space on site as it has expanded its operations over the past 20 years.

The hub building and parking facilities are to be separated from the existing buildings by a central plaza, where more greenery and open space will complete the campus.

Sky is in the process of moving its staff across from one end of the site to the other, joining together 7,000 of its workforce in to one central campus. Such a move brings about its own challenges, chiefly the need to find more dedicated, customer-focussed and proactive staff to to its service team.

"We want to increase the number of people who see it [Sky's service culture] that way," says Green.

Green, Dean and the 850 people in the service team seem keen to take Sky's Believe in Better slogan to heart, regularly indicating improvement initiatives they make. They will be hoping their own ambition to succeed rubs off on the rest of the workforce. 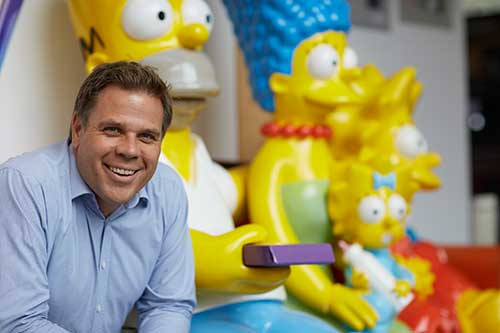