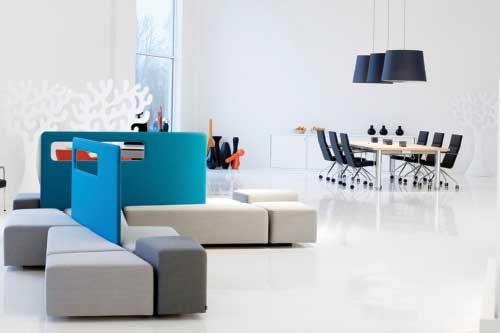 'Activity-based' offices offer more flexibility in workstyle choice, but they also require managers capable of imposing strong user discipline if they're to be truly effective  as research at the Center for People and Buildings, Delft University of Technology, has found.

New developments in office environments are typically based on the expectation that the effectiveness of the environment will increase and productivity levels will grow.

Another aim, one often mentioned by Dutch employers, is the desire to be an attractive proposition for future employees. Organisations fret that without a popular and competitive work environment they might lose the 'war on talent' (Rieck & Kelter, 2005). What's more, research shows that offices do indeed influence job satisfaction and productivity (Carlopio, 1996; Veitch et al, 2003).

Many European organisations have already adopted flexible and dynamic office ideas - the Netherlands having seen many so-called 'activity-based' office concepts, (also referred to as flexible or combi-offices).

Managers of activity-based offices often deploy a clean-desk policy to ensure that enough workplaces are available at all times. Employees are expected to clear their desks if they plan to leave them for more than a couple of hours.

The most frequently mentioned positives were architecture and interior design, with most people liking how these elements contributed to a warm and pleasant atmosphere. The work environment was also perceived as cleaner and tidier compared with more traditional work environments. People also appreciated the large amount of light, use of transparent materials and generally open layout of the building.

The openness of the work environment was specifically mentioned as a key positive, and people found it easier to see each other and meet new staff. This, said some employees, leads to a more dynamic vibe.

Furniture was another factor regularly described as an advantage. The design of the furniture was particularly valued and employees also appreciated acoustic materials being applied in the work environment to keep down the noise. 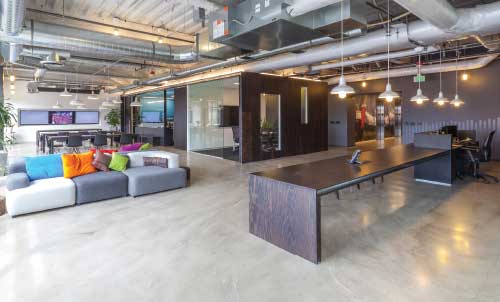 Several significant negative issues came out in the group interviews with employees. From these it was clear that the most important downside of the activity-based office environment was the lack of possibilities to concentrate. In some cases respondents specifically complained about the acoustics. Some felt that the more open work areas were uncomfortably crowded; others cited being distracted by the noise and other people moving about.

Another perceived negative was the lack of privacy. Many participants did not like having a confidential conversation or phone call in the open space, often fearing that they would bother others. The lack of visual privacy was also an issue for some employees. This applies especially to the smaller meeting spaces in which confidential conversations should take place.

Indoor climate emerged as a major shortcoming - most complained about temperature or uncomfortable airflow. In some cases concerns about a poor indoor climate in the enclosed spaces were also raised. This was linked to a lack of personal control over the indoor climate because people had to share the space.

The provided mix of workspaces was brought up as a positive aspect, but more frequently a negative one. A main reason for the large number of complaints is that some of the workplace types are simply too popular. People who arrive at the office late in the morning often do not get the opportunity to select the workspace most suited to their activities. The less popular spaces are barely used, so people feel like this is a waste of valuable space.

In more than half of the research cases, support facilities emerged as a drawback (15 cases, 32 interviews), and complicated and inflexible IT systems reduced flexibility for employees. Having to move personal belongings and files from one place to another was also seen as a time-consuming hassle.

Respondents also said that not everyone switches workplaces during the day or even during the week, regardless of the 'flexible' intent of the activity-based idea. This problem was also reflected in remarks about undesirable 'claiming behaviour' by managers. Addressing annoying behaviour among co-workers was seen as difficult, and people also complained about having to actively search for a workplace - for these people it was just not practical for some functions to work flexibly.

A lack of social interaction with co-workers was cited as a significant concern; many said they could not have a personal conversation with colleagues because of the openness. People also complained about less knowledge sharing and less social bonding with colleagues.

Storage and archiving facilities also came up as a drawback. The shift to a digital archive was not always without problems and in some organisations difficulties continued after moving into the activity-based office.

But despite these issues, the longer people spend in an activity-based office, the more they are likely to enjoy them.

The generally fresh, light and colourful environments generated by activity-based offices are typically relished by workers.

But the general increase in knowledge sharing and social interaction - evidence that accords with other literature in this field - can perhaps be seen as double-edged. People also report experiencing a decrease in communication with their direct colleagues, as well as difficulties with discussing private issues in open space. The social bond with colleagues also seems to suffer.

One explanation for this is that the openness of the work environment makes it more difficult to share thoughts, feelings and values (Oldham and Brass, 1979). So solving these problems could hinge on mutual agreements on worker availability and 'findability' in the office, as well as the introduction of team-building activities.

As expected, there were low satisfaction scores when it came to work requiring concentration and privacy. Distractions come mostly in the form of phone calls and conversations in open spaces. Dedicated enclosed spaces for phone calls help solve this common problem, and the same is true for ad hoc meetings, which should be held in dedicated meeting areas or enclosed rooms close by. Confidential meetings should be held in small meeting rooms and enclosed rooms with acoustic and visual privacy. Behaviour also plays an important role; after providing appropriate spaces, employees must be policed to use these specific spaces in the right way (for example, no telephone calls in open spaces).

And although workers certainly appreciate the different types of workplaces an activity-based office offers, the right space is not always available to those who want it when they want it. Because some workplaces tend to be more popular than others, they are claimed regularly (or because people do not clean their desks).

These issues call for more detailed initial analysis before fit-out of workplace types to ensure provision of a variety of workplaces according to the work done by employees.

All these benefits and drawbacks are influenced by the behaviour of building users. When people use activity-based work environments correctly, they tend to benefit from all of its various elements. The example set by managers plays a key role. Clear rules regarding the use of the work environment can help people to bring up behavioural issues among colleagues.

And although these interviews mainly confirmed much existing knowledge, the results took us a step further in explaining the positive and negative matters cropping up in activity-based offices. 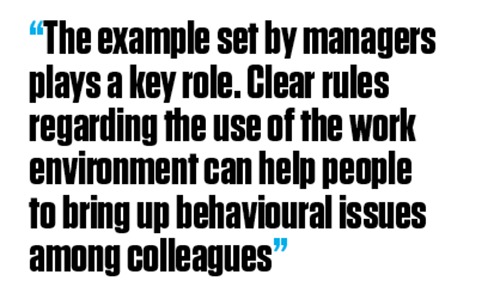 About the authors Iris de Been, Marion Beijer and Dorieke den Hollander are researchers at the Center for People and Buildings, Delft University of Technology. This research was first presented at the EFMC 2015 Conference in Glasgow.