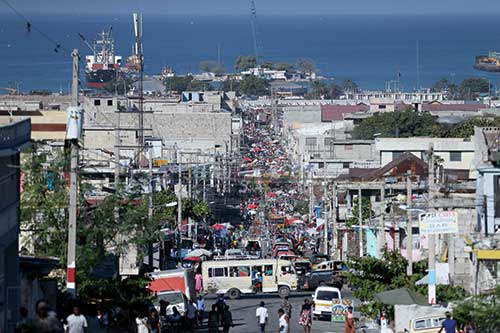 The role of FM within international aid charity ActionAid has developed considerably since Will Bowen joined the organisation, as Jamie Harris reports.

"Less than two weeks after we moved, they had trouble in the premises," recounts Marie Andrée Saint Aubin, head of HR for ActionAid's Haiti office.

"There were threats of violence while mobs armed with stones approached the old compound forcing the occupants to flee."

Not exactly the typical fate of a recently vacated office, but this is no typical location.

Saint Aubin has been working with ActionAid for the past 14 years. Her 17-strong team works with the island's local communities, and in July 2014, four years after a 7.0 magnitude earthquake close to Haiti's capital city Port-au-Prince, they had cause to deal with a far from typical workplace security concern.

ActionAid is an international non-governmental organisation (NGO). Founded in 1972, it has been working on various projects in Haiti for nearly 20 years. In addition to emergency relief in the immediate aftermath of the earthquake, and recovery work in the medium term, the organisation now provides educational programmes, strongly promotes women's rights activities and supports sustainable agriculture across the country.

But to support its workforce on these projects - vital to local communities in deprived areas of the world - the charity must first ensure that its local working environments - and staff - are safe and secure.

Will Bowen has been facilities manager for ActionAid's UK offices since January 2013, and part of his time is also spent as a security focal point in the UK. But since October of the same year he has also been spending part of his time working with ActionAid's offices outside of the UK - a role that sees him supporting offices in 17 countries. It's a role described as 'regional security champion' and in Bowen's case it covers countries in Europe and the Americas.

As security champion, Bowen spends 10 per cent of his time away from the UK facilities he oversees, travelling to advise on security matters in countries including Brazil, Guatemala, Nicaragua and Haiti. ActionAid has three such champions, each reporting into the company's international security adviser Javeria Ayaz Malik. But while the other two have an HR background, Bowen, a former FM World Rising Star, is the first such champion from a facilities background.

"ActionAid looks at premises security, audits and health and safety, as well as human security, with facilities being key," says Bowen. "If you can't provide a safe and secure built environment, then you've got problems."

Bowen's FM experience allows him to influence local training and security decisions, but with broader FM requirements in mind. ActionAid works in more than 45 territories across the world. Understandably, in most cases FM isn't as formalised as it is in the UK, where ActionAid has had an FM requirement servicing its corporate office portfolio for the past 20 years.

Bowen's regional champion role means that he is on hand to provide advice on compliance, building improvements and health and safety. He also works closely with office coordinators in European countries, as well as those in ActionAid's Johannesburg international headquarters.

"If they need support on something I'll be there to discuss it with them," says Bowen, "and I'm also there to make sure minimum standards are being met as well. Each country has its local law, so the key is to abide by that legislation and then try to follow best practice after that."

Bowen visits these countries to ensure that standards are being met, which is why in July 2014 he was asked to complete a site visit to ActionAid Haiti's office. His role on this occasion was to complete a physical security audit of the premises leased by ActionAid Haiti, providing safety and security training to staff. Fire and earthquake simulations, first aid and health and safety guidance were also part of the agenda.

The audit allowed the Haiti team to decide on building improvements such as space planning to better prepare the workplace for emergency evacuations, as well as the placement of emergency exit signage - but Bowen's visit was complicated by the political instability endemic across Haiti. Its unpopular government had delayed the calling of elections while the United Nations (UN) Security Council was steadily scaling back its military support. 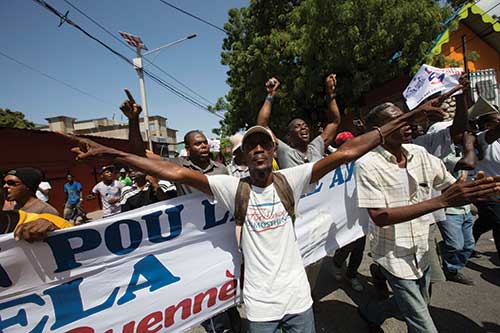 Bowen was asked to observe the situation on the ground and assess the organisation's capacity 'to identify and manage security risks'.

"Our built environment is so important," says Bowen. "It's where your staff operate from, so it needs to be safe and well looked after; without that, you can't operate. It's as serious as that."

Bowen duly identified a number of potential security risks specific to Haiti, from gun crime and health infrastructure (a cholera outbreak has killed nearly 9,000 Haitians as of April this year), and dilapidated building infrastructure resulting from the earthquake. The key concern, however, was something quite different - the other tenant sharing the office building that ActionAid Haiti leased.

"When they moved in, they said they were architects," says Bowen. "But it turned out that they were a political party."

Port-au-Prince has seen a number of demonstrations over recent years, some of which have been violent, with rocks and debris thrown as activists voiced anger at the Haitian government. Concern within ActionAid Haiti about the motives and actions of the party resulted in recommendations to relocate to a new office in order to secure the safety of staff.

"We had some meetings at quite a high level with our international management team, right up to the deputy chief executive," says Bowen, "and we then agreed funding to move to another part of town."

The audit had also revealed additional security concerns that the office move nullified, in particular the original building complex's use of armed guards. ActionAid policy states that "arms and armed personnel will not be allowed in ActionAid's premises or vehicles, except if staff are faced with a threat to life".

Although this security may well have been necessary in a politically unstable environment, the move eliminated this policy conflict.

Says Bowen: "[The relocation] allowed them to move away from operating in a dangerous, unsustainable environment to a safe, secure and more effective environment."

The relocation was suggested in July, funded, signed off and completed by October, just three months after Bowen's visit. And a good thing, too: within two weeks of the move the old office was being threatened by local people protesting against the political party.

Now, however, the team is working in a secure environment and the focus has returned to bolstering communication between ActionAid Haiti's employees and the local partner organisations it works with on projects, ensuring that they, as well as the people they are serving, are kept safe from violence and natural disasters.

"We are part of a number of networks," explains Saint Aubin, "so if there is any news about security, we receive the news on the spot; we can then avert and advise our staff of any troubles (such as protests or earthquake warnings)."

To this end, ActionAid Haiti works with the Office for Coordination of Humanitarian Affairs (OCHA), itself part of the UN. It also shares information and knowledge with other charitable organisations including World Vision International.

Where there's a Will

Bowen has learned a lot in his time with ActionAid, in particular the charity's ways of maximising the resources available. He's met a number of FMs at other not-for-profits to share his knowledge of the sector, and has also been able to bring across knowledge from his previous role at Sevenoaks District Council (FM World diarist Emma Vincent is Bowen's successor in Sevenoaks).

"Coming from a local authority, we had to make big savings, engage in partnership agreements and we are working on shared services projects. To be able to bring that sort of skill to the charity sector has been useful."

This small network of NGO FMs is, says Bowen, "a great little community; they know we all experience the same issues."

"This summer I held a BIFM Rising FMs SIG event (at ActionAid's UK HQ in Farringdon) at which I met the FM at Unicef. I already knew the guys at Greenpeace and the FM at WaterAid; we've got some nice reciprocal support agreements between each other for this like business continuity planning."

Since Bowen was drafted in as security champion, ActionAid's human security policies have developed to incorporate premises and facilities management.

"It has really developed, and more globally," he explains.

"There is some great legislation in the UK, and although I find that keeping up with it really adds to the workload, it's a great thing to take over [to the countries in which ActionAid works]."

Engagement in the demands of FM has certainly increased at a local level, with staff suggesting even small solutions to day-to-day projects.

"It can come down to simple things," says Bowen, "such as visibility coming out onto the road from the Haiti office. One member of staff just suggested putting up some mirrors."

Each country has a coordinator who remains in charge of facilities, but Bowen's visits are designed to advise and give recommendations. Such is their value that in Bowen's absence, other staff members now fill in. A recent audit in Nicaragua, conducted by Malik, saw Bowen participating through Skype.

The aim of many charitable organisations is not just to provide emergency relief, but to also leave a lasting legacy of support that can be self-sustained. The aim is no different with Bowen's role at ActionAid, where the goal is to enable others to take local FM decisions themselves.

"They are still in charge," says Bowen, "but now they have regional support if they need it."

Today, Bowen's role continues to be varied; at our meeting he explains he has trips to Berlin ahead, having recently conducted workshops in Thailand and Kenya. He's also a committee member on the BIFM's international special interest group.

And the greater awareness of FM has benefited ActionAid's UK FM as well. Says Bowen: "It has made me realise that facilities is key to any operation, and I've really enjoyed bringing the FM element into human security."

Although the day job of overseeing ActionAid's UK offices may not be as exotic, bringing another angle into the organisation's security strategy is paying dividends.

London (Greater)
Up to £47,276 per annum plus excellent benefits
Reference
59097
END_OF_DOCUMENT_TOKEN_TO_BE_REPLACED