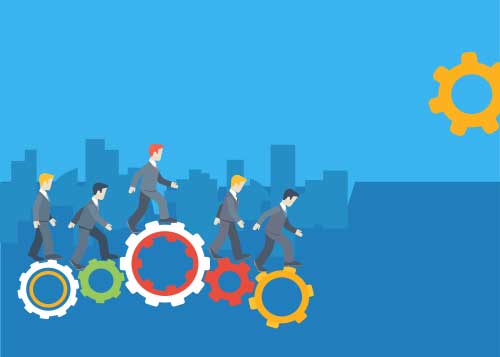 FM should be seen as a value driver in the sense of selling future levels of productivity, say researchers Daniel von Felten, Manuel Böhm and Christian Coenen, who call it 'the multiplier effect'.

Could a company that invests less than 1 into FM services increase its productivity by more than 1? This was the equation at the centre of our survey-based analysis of added value in FM.

Much has been published about the need for FM to be more strategic and escape the commodity trap. But it seems to be hard to quantify the value of the actual impact FM might have for primary activities. Even tougher, apparently, is quantifying the productivity gains caused by FM.

The point of the study was to respond to these challenges by creating a way to identify a demand-gap in FM and demonstrate the measurements of potential productivity gains.

It is the conventional wisdom that only a small share of the FM market has been professionally developed. This is because: a) The demand side (customers or clients) of FM services buys incorrectly or does not buy FM services at all. The study defined this as the 'FM-demand-gap'. The user knows which support services would be helpful, but the customer and/or the client are not aware of this or ignore it; providers may or may not know how the benefits of these FM services could be developed. All it needs is a little communication.

And b), no one - not the provider, the client, the customer or the users - knows how to exploit the likely benefits of FM. The authors defined this as the 'FM-supply-gap'. Professional FM is often not present in small and medium-sized enterprises, so there is little in the way of marketable FM products.

But through innovation in technology and service the FM-supply-gap can be tapped.

The FM community regularly talks about the value of FM and says the industry should raise the bar to be strategically relevant. As James Ware and Paul Carder noted in their 2012 RICS paper, "heads of FM are so often told to cut (or freeze) their budgets without reference to the causal chain of consequences to the workforce, to work processes and productivity, and to the bottom line itself.

"Without understanding the consequences of these budget cuts, FM has become a commodity rather than a professional skill in many organisations, to be procured at lowest cost. Worse still, the industry does not yet have the sophistication to be able to analyse and report on the consequences of lowered standards and reduced (or lower-cost) resources," they concluded.

Since 1985 when Michael Porter developed his value chain analysis as a comprehensive approach to developing corporate strategies, FM has been classed as a support activity. Further to this, researchers Margit Osterloh and Jetta Frost said in 2006 that companies should focus on their primary activities because support activities don't bring a competitive advantage and could be standardised and easily imitated. Maybe this is why FM services are seen as cost factors, bought as commodities, and not seen as a driver of productivity.

If it could be shown that FM could add to productivity, it would be a valid argument against shortsighted budget cuts.

First, the authors set about analysing part of the likely demand gap in FM by using a quantitative national online survey of 7,500 participants - alumni of universities of applied sciences in Switzerland in 2011. Of these, 61 per cent were managers: 16 per cent were upper management; 26 per cent were in middle management; and 20 per cent in lower management. The sample was drawn from different sectors, mainly manufacturing and production (18 per cent) and financial services (14 per cent).

A model for measuring the productivity enhancement through FM services was developed and the dimensions of a demand gap and a supply gap in FM defined. 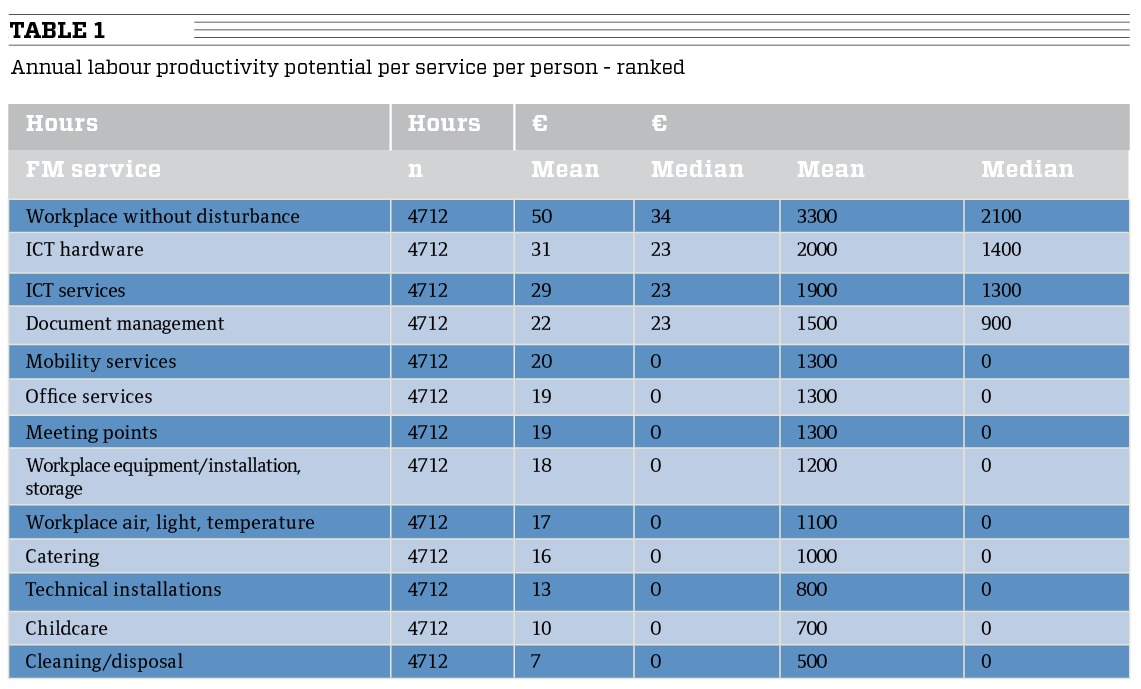 In 2006 The European Committee for Standardisation defined FM as the "integration of processes within an organisation to maintain and develop the agreed services that support and improve the effectiveness of its primary activities".

In previous papers Coenen and von Felten had shown that FM should be seen as a service management discipline in addition to its built environment and engineering focus. The effectiveness of the primary activities is often associated with productivity, which they defined as the relation between output and input.

Since Stephen Vargo and Robert Lusch's 2004 and 2006 contributions to the service dominant logic (SDL) stressed the importance of services compared to goods, the value of services can be characterised thus: (a) the customer is always a co-producer of value, and (b) the value of a service cannot be measured only at the price achieved in the market, but also perceived differently depending on the perspective of the customer.

So it is recommended that in addition to the paid price - defined as the exchange value - the use value should be distinguished as the individual value for a user. To increase the efficiency of the core business, FM could either provide a higher value of use in relation to the used FM resources, and/or increase the productivity with a cost for FM services that is lower than the achieved productivity growth of the core business (service productivity/value of exchange) - creating a multiplier effect. In other words, whether a firm that invests less than a euro into FM services can increase its productivity by more than 1.

As mentioned, the FM-demand-gap occurs when the user knows which support services would be helpful, but the customer and/or the client is unaware of this or ignores it and buys FM services inadequately or not at all.

Users were asked to rate how the quality of their work changes when the FM services are offered "in the best possible way". Respondents selected answers from a four-point sliding scale: 'Not at all'; 'Slightly better'; 'Better'; 'Much better'; and 'Don't know'.

The sum of the answers in the four middle choices represents the potential FM-demand-gap. It is not clear whether the added use value would surpass the possible additional resources to enhance the service - only if so it will be a genuine FM-demand-gap - something that is a need from an economic point of view and not just a want from a user.

Respondents were asked: "How much productive work time a week do you gain if the following services in your organisation (workplace without disturbance, ICT services, meeting points, technical installations, office services, catering, mobility services) are offered in the best way?" 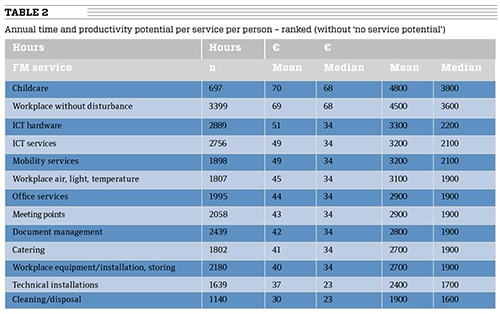 The average costs for an office workplace are 4,100 a year. The increase of the workspace for more distance to co-workers and additional acoustic barriers would total 5,500. The additional cost of increasing the workspace for each employee and adding acoustic barriers would be 1,400 a year, compared with the annual labour productivity potential of 4,500 a year - an average net productivity potential of 3,100 a workplace a year.

The results show there is a huge potential FM-demand-gap. How huge depends on the service and its effects on 50-80 per cent of users. And services could not only increase the productivity of the core business, but also enhance net productivity. FM should be seen as a value generator in the sense of selling productivity.

The task was not to analyse how this capability could be tapped. FM is a service, so the customer/client/user is always a co-producer of FM and the value of use is subjective for each stakeholder. But the authors assume that with procuring and providing FM as a commodity, the benefits are greatly under-exploited.

The data will undergo analyses promising insights on areas such as differences between occupations, industries, job satisfaction and age. The authors hope other nations will extrapolate this study on their own FM-demand-gap and multiplier effects to compare data.

About the authors Daniel von Felten, Manuel Böhm and Christian Coenen are researchers at the Institute of Facility Management, Zurich University of Applie Sciences. This research was first presented at the EFMC 2015 conference in Glasgow.