My life in furniture 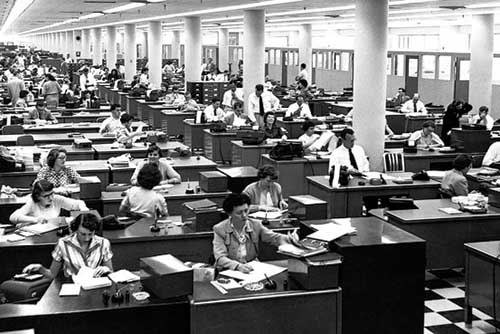 John Fogarty, retiring as special projects director for Bisley Office Furniture, charts his role in the development of office furniture systems from the end of the Mad Men era through to the rise of the Millennials.

I was lucky enough to enter the office furniture industry in 1971 at the beginning of the decade that saw an explosion in the advance of technology used in office work.

Anyone in a corporate office in the 1980s would have observed little change from the late 1940s through to the 1950s; serried ranks of desks were occupied by clerical staff bashing away on manual typewriters and mechanical calculating machines.

Electric typewriters had been around for most of the century, but decades of global conflict had slowed their development to a snail's pace. The major advance came with the 1961 launch of the IBM Selectric golf-ball. Although a beautiful object (this was the first item to be associated in my mind with the term 'product design' by name designer Eliot Noyes), it remained expensive until the multi-licensing in 1972 of the Diablo (a division of Xerox) daisy-wheel print head led to a dramatic price reduction.

Also in 1970 came the first pocket calculator, rapidly followed by the first scientific calculator by Hewlett Packard. Log tables and slide rules were consigned to the dustbin in science, technology and education departments - and access to this type of work was opened up to a far wider, less specialist group of users. During the decade distribution burgeoned thanks to tumbling prices and the desirability of smarter designs using lower-energy liquid crystal displays.

The first furniture system I worked on was Link 900 for Carson in 1974, developed in conjunction with Click Systems. To overcome the scale limitations of photography in this pre-computer-aided design (CAD) era, we built a fifth-scale model of the product and shot it in conjunction with full-scale layouts and details to create the colour brochure. I think it's a design that stands up well today.

In 1975 I left to run the design and space-planning studio for the Project Group (Project Office Furniture, Druce and Library Design and Engineering). I stayed for six years, but almost all the work was of an interior design and space-planning nature - and little of the product work I did made it into production. So in 1980 I moved to the Kasparians Division of Flexiform. The parent company was in dire financial trouble and the group was placed in receivership six months after I joined - but I did manage to complete a transfer of technology deal to manufacture a Swiss task chair programme under licence. 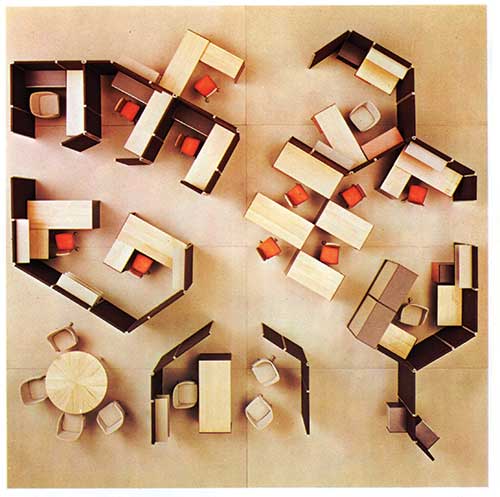 I then moved to GA Harvey in 1981, as design manager - my first hands-on experience of working for a mainstream steel storage manufacturer. The 1980s was the decade of the personal computer, but I clearly remember a largish proportion of the capital budget for George Harvey - my first full-blown office furniture system as a design department manager in 1982, in conjunction with Geoff Hollington - being expended on a huge moulding for the typewriter 'well'. (Because of their extreme height the machines needed a section of the work surface to be lowered so that the keyboard was anthropometrically correctly positioned.)

We integrated existing steel storage programmes into the system by the application of a common handle profile attached to the horizontal and vertical edges of all doors, drawers and tambour shutters. This kept the development programme within the personnel and financial resources of the company.

After George Harvey we designed a simpler, lower-cost programme for the dealer market called Harvey 8. This used welded rectangular tube for the C-frame legs, uniquely employing the vertical member as a no-cost riser for the cable-management system.

The tops were equally innovative, comprising a bonded sandwich of pre-coated steel skins with a foam core to provide a panel of such innate stiffness that no transverse rails were required. The pre-coated finishes were a natural oak and grey-stained oak, which for months featured in a Halifax TV ad and seemed to kick-start the trend for colour-washed timber finishes in office furniture. The programme won a European Coil-Coaters Award.

After Harvey I joined Desking Systems as design director-designate in 1987. In the 22 months I was there we designed and produced a wholly new frame-and-panel-based screen programme to support its various existing desking ranges, called Interface. This addressed an obsession with segregated power, data and comms cable-management at every level and every direction, enclosed by upholstered and glazed cladding 'tiles' reflecting the various working and storage heights. But I did introduce a new component  in the form of cove, quarter-round and triangular-shaped corner pieces. This was a way of handling the transition between heights and of introducing a playful architectonic element to the office landscape in the manner of a Philip Johnson or Michael Graves postmodern building.

This period marked my introduction to mainstream CAD. I bought four 80386 (32-bit) PCs running AutoCAD, which cost more than £5,000 a 'seat', to be shared between the product designers and space-planners in my department.

We established a showroom in Islington's Building Design Centre in 1986, and in 1987 participated in the Top Office show there, creating an office space for fashion designer Jeff Banks.

In 1989 I joined Bisley to run the design side for the Office Kit division, but later my role included all product design activity. I brought Phil Fenton and Chris Fowler with me from Desking Systems and early on we concentrated on bringing the Office Kit programme up to date. We also started marketing some existing Bisley storage programmes through the forerunner of our systems division. In 1990 we sold more than 3,000 special 2.2-metre-tall, side-opening Tambour units to Clifford Chance for its new London Wall HQ. This taught me the importance of being involved in a project at the earliest possible stage, working closely with the client.

In the 1990s we expanded our product base to include types of steel storage suitable for integration by office furniture OEMs. Key among these was the Bisley Universal Pedestal from 1991 and the Lateralfile programme from 1996. The latter coincided with the opening of our Great Portland Street showroom and hiring specialist sales and support staff to address the A&D sector. We also opened sales subsidiaries in Benelux, Germany and France, raising the profile of the Bisley brand to one of blue chip, global reach.

The Wings desking programme of 1993 was developed for our Benelux subsidiary and thus featured distinctly European style. It later attracted a loyal following in the UK. The screen programme we developed for it in conjunction with Derek Treadwell was also groundbreaking in terms of the slender, tapered frame-less construction used across both the freestanding and desk-mounted variants. It was internally dubbed the TGV after the high-speed French train, which the smoothly blended top rail resembled.

From the mid-80s Bisley exhibited at domestic and international shows, including Spectrum (which later morphed into Design Prima) in London, Orgatec in Cologne, and Salone Ufficio in Milan.

We have also been emboldened by the creativity of designers and clients with whom we've worked. I'm thinking particularly of the BBC. Some product variants that started life as client specials have been incorporated into our standard portfolio.

In 1998 we merged the BUP and subsequent Bisley Economy Pedestal (BEP) into a single platform-based programme called the Bisley Integrated Pedestal. This remains as the basis of our mainstay upper value pedestal offer. The 2000s saw the introduction of SystemFile and Towers in 2000, a high-density mobile programme for the front office called InnerSpace in 2004, Note and Wave Pedestals in 2006 and Bite, a unique trolley for bench desk application, in 2008. We also opened subsidiaries in Spain, Ireland, UAE and the US. 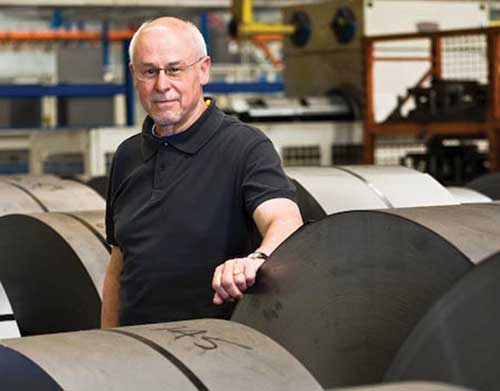 The 1990s-2010s were a watershed in terms of step-change development for Bisley. Starting rather conventionally with the introduction of Glide and MonoBloc Lockers in 2010, we moved on in conjunction with Radar Design to develop what was initially Console but morphed into Be, launched in 2013.

It is no longer possible to consider office furniture in terms of the traditional elements of work surface, seating and storage. A combination of the post-banking crisis squeeze, advances in communication technology and a heterogeneous staff mix of Baby Boomers, Gen Xers and New Millennials has altered the office landscape forever. Individual and teamwork can just as easily be undertaken using occasional furniture in a breakout or catering area as at a traditional workstation or meeting room.

What the new millennium office requires is a mix of furniture types than can be flexed to suit changing needs - and this requirement can only be met by a fully integrated furniture system that has been conceived with that objective in mind. We commissioned a comprehensive CAD-rendered video from Radar before the final design was drawn up. So effective and accurate was this that it is still in use in edited form. The product is loaded on Configura so that it can readily be planned, specified, purchased and installed and be re-planned, re-specified, topped-up and re-installed to suit changing need.

My swansong for Bisley was Stage; a crossover furniture platform for home office and SME corporate office application. A fitting way to end a long and satisfying career in a fast-changing but enduring sector.

London (Greater)
Up to £47,276 per annum plus excellent benefits
Reference
59097
END_OF_DOCUMENT_TOKEN_TO_BE_REPLACED