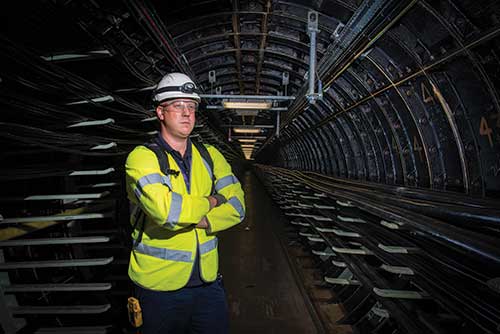 It can be physically draining work to maintain the essential wiring keeping the UK's phone and broadband networks going, as Jamie Harris reports.

Glenn Barrett is busy handing out various items of personal protective equipment in his office, explaining to me the safety routine in the event that we are deprived of oxygen.

He checks his radio equipment, ensures that he has the correct set of keys and tools for the job at hand, puts on his hard hat (complete with flashlight attachment) and leads me towards the elevator shaft. For me, this is not going to be a typical working day.

Beneath London's heaving streets and, indeed, those of other major cities across mainland Britain, there's a network of tunnels that carries critical telecoms cabling to serve both homes and businesses. Barrett is deep level tunnels (DLT) technical supervisor for BT Facilities Services (BTFS), and 40 metres below us his team is carrying out a number of routine planned maintenance programmes. The team is very much a mobile one, travelling the country to ensure up-time of these critical networks. Responsibilities range from security and access control to infrastructure compliance, equipment testing, health and safety and planned maintenance.

My time is spent in the London network, the longest at no fewer than 27 kilometres of tunnels. These tunnels were constructed in the 1950s to hold copper cables (since replaced by more advanced fibre optics). Both the tunnels and cable are owned and operated by BT's Openreach business.

When BT set up its in-house FM division (BTFS) in 2013, it gave notice that it would look for opportunities to bring more services back in-house, particularly when contracts came up for renewal.

Jim Goatley, head of technical services at BTFS, explains how Openreach approached BTFS to see if the latter would be interested in taking on the work. It was, and a specialist sub-division, BTFS Deep Level Tunnelling (DLT) was set up. Today, BTFS's technical services division, led by Goatley, has three specialist areas - technical support and advisory services, technical compliance, and deep level tunnels.

When the contract with previous supplier Spie Matthew Hall came to an end in late 2013, 20 people transferred to the new BTFS DLT division.

"Because of the criticality of the tunnels, we couldn't let anything slip," says Jim Goatley, BTFS head of technical services. "We had to make everything work from day one."

Goatley and Colin Dickey, BTFS DLT manager, set about creating an asset database for the network, putting together a planned maintenance programme from scratch.

"It took us some months to get that in place," recalls Dickey. "We were maintaining in the interim, but we weren't maintaining on our system."

Initially, generating planned maintenance work was quite a challenge, "due to the need to recover and record detailed asset information", adds Goatley.

"The files are separated and access is restricted," says Dickey. 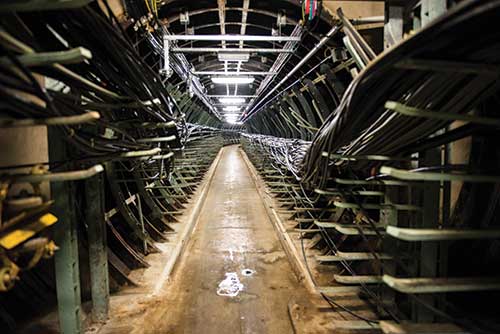 The transition to BTFS came in November 2013, with the need to prevent gaps in service proving the toughest part of the whole programme.

Ensuring access for BTFS staff was another vital process. The nature of the network and some of the critical national networks it supports and its proximity to some vitally important parts of London mean all individuals must be cleared for access. Initially, says Goatley, "we didn't have anybody who was security cleared".

This requirement adds considerably to the contract's challenges. BTFS DLT works with various suppliers for items such as doors, light fittings and alarm systems. Says Dickey: "We were able to take on some of the existing suppliers, but with our own it's quite challenging because the environment for project works is totally different to normal.

"Not all suppliers can take the time out to do a survey when there's no guarantee of them getting the work."

The tunnels are astonishing. Blocked-up passageways and disused escape shafts offer an insight into working life after the tunnels first came into operation. Old wooden signage and safety notices are still in place at some junctions. Some of the disused concrete cabling connectors, now 50 years old, still sit below ground in larger connecting tunnels.

"They are so heavy that the process of removing them would take far too long," says Barrett. The team has other priorities, such as keeping the cables dry.

"We have pumping systems taking out water in all of the tunnels," says Goatley.

Some of the 25 other tunnel networks covered in the contract carry other risks, such as gaseous hazards. The BTFS team ensures that each tunnel is safe to work in before carrying out its tasks.

"Access is tricky, so you have to plan carefully where to head to first thing in the morning," says Barrett, explaining how travelling with bulky tools and maintenance equipment is much simpler above ground. (He hands me his rucksack. It's heavy.)

Activities are notified far in advance and jotted down on a whiteboard in Barrett's office. Everything, from each light (and emergency light) to the fire doors that separate tunnel segments, fire alarms and humidity and water detectors, is regularly tested. The team must also be on hand to escort any technicians, suppliers or external contractors (as well as this reporter) on visits.

Once the team's routine is mapped out, its members meet at an agreed access point, kit themselves out with protective gear and descend below ground. The BTFS team all emphasise that safety is paramount. Anyone entering the tunnel network must radio in to BTFS's operations centre every half-hour.

Each tunnel network is mapped out using a classified coding system and the operations centre is crucial to its safe working.

"We'll let them know where we are, if we have anyone with us, and where we are heading," says Barrett.

Conditions can be cramped. Some of the tighter tunnels are eight feet in diameter and have little headroom. Rows of metal cable racks reach out from either side, holding the cables firmly.

"You're walking with not much clearance either side," says Goatley. "You can get a little bit disorientated - if you sway to one side or walk quite fast it can be quite painful."

Over time, the process of replacing older copper cabling with thinner, faster fibre optics has left some racks empty.

"If you can imagine before, every single rack was filled to the brim with huge copper cables," says Barrett. "The thinner cables are not only smaller, but carry more phone lines and broadband connections and at a faster speed." Nevertheless, "it still gets very tight in some spots". 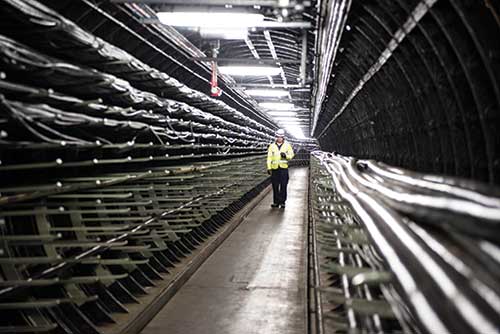 Who does the work?

You need to be the right shape and size to be part of the BTFS DLT team. Owing to the confined nature of the tunnels, BTFS does not employ anyone working underground who is taller than 6ft 4in, and you need to be physically fit. With 27 km of tunnels in London alone (and no Underground trains running through to carry staff from one end to the other), walking is a major part of the job. Climbing might be required too.

"There are emergency procedures for escape," explains Goatley. "Some of the escape tunnel staircases and shafts are very high and long."

And there are some other personal comfort difficulties, adds Goatley. "We've only got one tunnel with a toilet, so you have to be... well, disciplined."

The team is not allowed to carry food, and drinks are limited to water. But the tunnels are surprisingly clean.

"There are no pests down there," says Goatley. "No one has ever seen a rat, I believe there's nothing for them to feed on."

Each day for the BTFS tunnel team is like completing an obstacle course, but that hasn't put off anyone from working on the sites. Turnover of staff is low, and when vacancies come up the various privations do not influence the recruitment process.

"We don't do anything different, to be honest," says Dickey. "They like the environment."

The team takes pride in working in a unique location. "I think that's the selling point," says Goatley.

Barrett says although BTFS has only been managing the tunnels for two years, some of its staff have been working on site for a long time: one man, Patrick, came out of retirement to continue working on the team.

"We all call him 'Pat-Nav', because he knows these tunnels so well," says Barrett.

In the capital, the BT tunnels are just one part of what is now a crowded web of infrastructural and transport networks. With Crossrail under construction, BT Property and Openreach work with the various stakeholders to ensure both workforce safety and the tunnels' structural integrity.

If any construction is set to be close to the tunnels, whether above or adjacent, BT sets up a risk assessment process and carries out vibration monitoring to assess any likely issues. For now, it's business as usual for the BTFS DLT team. One-off projects such as replacing fire doors and lighting racks may be extensive, but it's evidence of the value of routine maintenance in keeping London's central nervous system up and running.

For most people 40m above, this article is only scratching the surface. 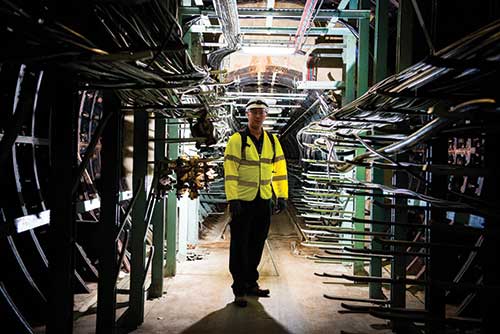