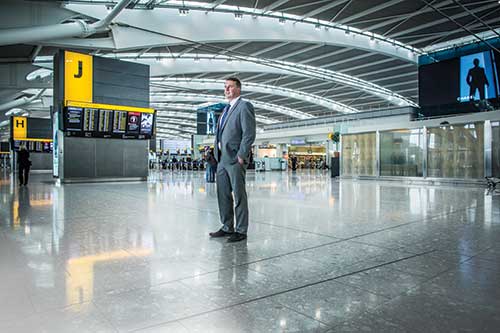 Alan Russell, head of facilities management at Heathrow Airport for Terminal 5, has made the most of what's turned out to be an ideal environment for an ambitious, self-starting engineering & facilities manager. Martin Read reports.

Category: Facilities Manager of the Year

Monday 12th October proved to be quite the night for London Heathrow Airport Ltd.

Already highly commended in the learning and career development category for the way it develops its engineering & asset management personnel (with much emphasis placed on Heathrow's longstanding apprenticeship scheme), Heathrow then saw its Terminal 2 engineering and facilities team win in the Impact on Customer Experience category, selected for their close involvement in the design and development of the new terminal building.

How could the night possibly get better? And yet it did, when Alan Russell - a product of that very apprenticeship scheme, and just as enmeshed in service delivery for Terminal 5 as his colleagues in Terminal 2 - was proclaimed the 2015 facilities manager of the year.

It's quite the achievement. Alan Russell has risen from a teenage apprentice to become responsible for all of the engineering and facilities services, hard and soft, across Heathrow's Terminal 5 campus. This is as comprehensive a role as it sounds, encompassing compliance, contract management and asset management. (Among engineering assets under Russell's charge are the terminal's lifts, escalators, conveyors, lighting, water and ventilation systems.)

Russell has P&L accountability for expenditure on cleaning, maintenance and energy; he's responsible for a budget exceeding £27m and an in-house team of 120. His key clients are the terminal's airline users, chiefly British Airways, which makes up 53% of air traffic operation at Heathrow; and he's understandably proud of he and his team's part in T5 being awarded World's Best Air Terminal for two years in a row.

Colleagues talk of Russell in effusive terms, citing his "appetite to learn" (head of engineering, Ross Everix) and "thirst for knowledge" (engineering training and development manager, Kelly Stone). They speak of an approachable management style and a desire to help others follow in his footsteps. BIFM Judges mentioned "an unassuming blend of experience and commitment, team leadership and professionalism".

For someone in his thirties, Alan Russell has had an extensive and varied career spanning all of the engineering and facilities activity at Heathrow. So what got him interested in this line of work?

"I just wanted to get my hands dirty fixing broken things," he explains. "I've always had a need to get stuck into how things work, to understand electrical and mechanical systems."

Russell attended Bishop Ramsey School in Ruislip, a few miles north of Heathrow. (Today, Russell lives in Uxbridge, a similarly short distance away.) Then as now, the school had a reputation for the STEM subjects in which Russell excelled. But in 1997, rather than stay on for A levels, he decided "to get out and learn, to see what the world had to offer".

Although few were available back then, Russell wanted an engineering apprenticeship - and in fact, he'd already cultivated a connection with Heathrow. Aged thirteen, he'd undertaken a two-week work experience programme in the engineering workshop still based at the northern end of the airport.

How did he get this? Just by asking. Indeed, it's this drive to make things happen that's something he's keen to convey to others starting out on a similar career path.

"If you want something you need to own it and push it forward; no one will do it for you. Fortunately, I had support from my parents. (Although Russell's grandfather on his mother's side was a mechanical engineer, as was one of his uncles, "I wouldn't say I was from a long line of engineers".)

Heathrow's engineering apprenticeship scheme had built up long-standing credibility within the Heathrow community. Today it is seen as one the best in the country Russell says he benefited from both the structured learning and on-the-job experience. Every three months, apprentices rotated to different sections of the airport to experience the various different engineering teams operating across the site. It's this that Russell believes gave him the confidence to take on the challenges in his later managerial positions. 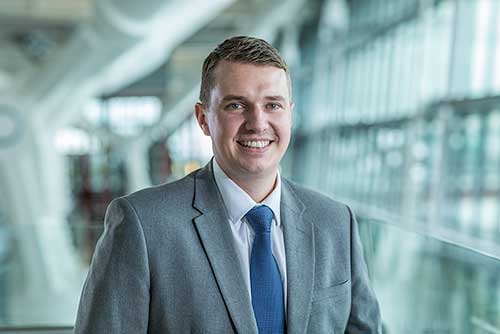 It didn't take long before an opportunity to enter management arose. It came when Russell was a 21-year old engineering technician in the generation (then boiler house) team, "getting stuck in" to large heating and cooling infrastructure systems. When his line manager resigned, Russell applied for the vacant post.

Says Russell: "It was a huge test, realising the difference in how you add value as a manager, as opposed to just going around physically fixing things."

And he's quick to credit one of his early mentors. The sponsorship of Greg Ward, then engineering director, helped Russell to get his first managerial role. Ward, says Russell, was "a larger than life character, but one who, while he threw you in at the deep end, never let you sink".

In his maintenance management positions, Russell certainly made his mark. To quote just a handful of projects, as maintenance manager; water infrastructure, he developed the scope for tender documents and improved engineer productivity by 20%. As engineering delivery manager; thermal energy, he delivered Heathrow's first biomass heating installation, also reducing utilities demand to the value of £500k per annum. Much of this work and more besides showcases the level of strategic decision making which Russell's employers have allowed him as his career has progressed.

In 2012, Russell was appointed facilities manager for Terminal 1, where he soon became involved in overseeing the raising of standards in the run up to the Olympics - "a case of stripping everything back to basics, right down to assessing toilet cleanliness - a key customer satisfaction driver for Heathrow".

Then, personnel issues saw Russell add the interim position of FM for Terminal 3 to his Terminal 1 portfolio, a role allowing him greater experience of the airport's airline clients.

"I got a broader understanding of T1's short haul and domestic traffic, but also the long haul traffic of T3," explains Russell. "Short haul has a really short turnaround, so there's a lot of focus on air bridges in terms of delivering a great service. For long haul, there's more of a focus on departure lounges and dwell areas, because people generally check in earlier."

At Terminal 5, both must be considered. Russell was appointed to his current role as head of FM for T5 in 2014, having already had knowledge of the terminal when scoping and specifying the contracts for its opening. The largest freestanding structure in the UK, T5 has its own unique requirements, not least of which is Europe's busiest track transit system. Russell points to a recent two month period in which the track transit delivered 100% service - the first time since the terminal opened in 2008.

In the T5 office, Russell's team shares desk space with their Mitie and Carillion supplier representatives. Over the last eighteen months, Russell has been involved in a tender exercise focused more on output specifications, from a cleanliness and fabric perspective.

"We've now got large framework contracts in place with a small number of organisations," explains Russell. "Our key first tier suppliers from an FM perspective are Mitie, Carillion and ISS - we've got the big guns in the building! And it's testament to the great relationships we have that they, too, are keen to adopt our one team approach." 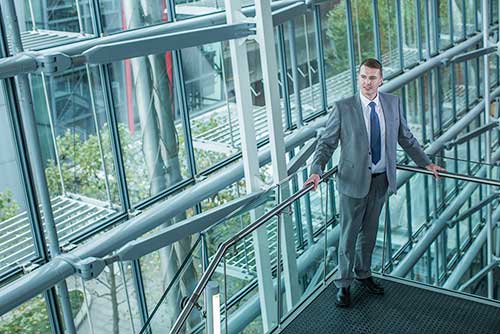 The perfect place for engineering FMs?

I wonder which is most important in his career progression - the man himself, or an employer that has allowed him to develop? Russell believes Heathrow is the perfect environment for an engineering FM to flourish, but also cites personal details such as dressing the part or being alive and responsive to requests. And then there's his appetite for volunteering; Russell chose, for example, to be part of Heathrow's operational crisis team as its technical engineering operational representative.

And over the last twelve months he's also chaired six-weekly best practice session involving key suppliers, seeking to ensure that while suppliers remain competitive, it's a competitive element does not lead to siloed working.

Three years ago he accepted the extent to which the personal development programme made available to him could "really help really drive a career; it's been fundamental in pinning down what I wanted to do".

Today he also spends plenty of time supporting people from a coaching and mentoring perspective.

Recent projects have included internalising and upskilling more facilities engineering personnel, the result of customer surveys indicating the need to improve the condition of air bridges (the mobile gantries linking aircraft to terminal gates). A decision was made to move away from sub-contractor servicing and internalise the resource required; Heathrow now has its own air bridge technician resource, based on site 24 hours a day.

"Critical to an airline's success is punctuality - if an air bridge breaks halfway through an operation you have 200 people stuck on an aircraft, or an aircraft that can't be boarded. For us it's about getting under the skin of the airline client, understanding what is important to them and how we can support that."

Moving the other way, as part of a new resourcing strategy for its fabric works, Heathrow has outsourced some lower-skilled work.

"We're training our guys so that they can more often fix faults first time rather than pass them on to a supplier," explains Russell, who is also now working on a Heathrow-wide project to electrify 40% of the engineering vehicle fleet, working out how they can reduce the number of vehicles in the fleet and reduce their C02 footprint. "We're also questioning how we move our people efficiently around the campus to enable them to do their job better. Can we put electrical vehicles within the buildings and move people internally? We are really looking to push the boundaries."

As an enthusiastic ambassador for FM, you're likely to see a lot of Alan Russell over the next twelve months. His team already undertakes various community activities "to help drive the message of how rewarding the FM sector is."

As FM of the year, he's aiming to do all he can to promote the sector. Even prior to this award he'd spent time in secondary schools and universities, aware of the need to increase the number of people passionate about engineering and facilities.

"I see the role of FM of the year as ambassadorial," he concludes, "I'm really keen to get FM out there."

Alan Russell is speaking at a BIFM People Management SIG event in London on the evening of Tuesday 17th November, entitled 'The DNA of a High Performing Facilities Manager'. For more details, and to book your place, click here. 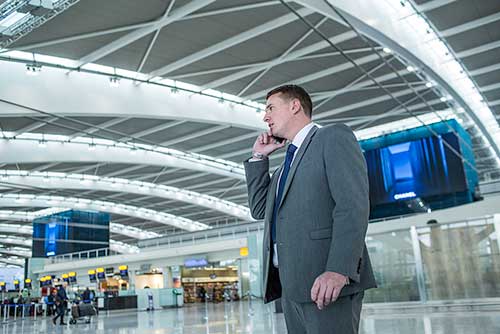