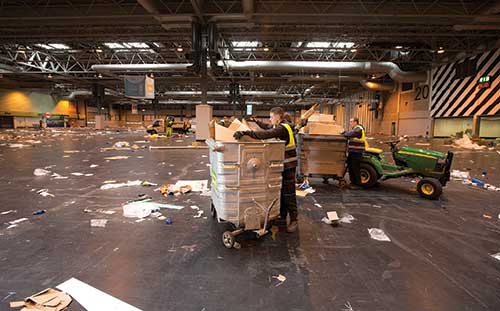 Birmingham NEC's facilities team, 'Team NEC' beat its own high targets in waste management and has been recognised for its commitment to new sustainability initiatives including cutting landfill, water use, energy wastage - and costs, writes Jamie Harris.

Each of my previous visits to the National Exhibition Centre (NEC), an events venue and complex situated adjacent to Birmingham International Airport, began with a train ride from London, and was followed by a brisk walk across from the train station to one of the exhibition halls for a day's reporting, before I embarked on the return journey. From Euston Station, I never placed a foot outdoors.

So focused are the visitors on the exhibitions and events the NEC holds, ably supported by various amenities located on site, that much of the rest of the centre's operations will go unnoticed.

Last month, this behind the scenes success was brought to the fore as NEC's facilities team, 'Team NEC', walked away as winners in the Impact on Sustainability category at this year's BIFM Awards.

Judges said that the NEC's entry "provided a compelling example of best practice in waste management". They are not wrong; the NEC have hardly missed a beat, setting (and beating) high targets in a continuously evolving environment.

The NEC is home to 140 conferences and exhibitions each year, providing additional challenges for the facilities team, which must work with constantly changing third parties on site.

The facilities team, a partnership between in-house staff and service providers CBRE Norland and OCS which is branded as 'Team NEC', carry out hard and soft services, including cleaning, waste management and maintenance and compliance services. The team's size fluctuates, depending on how many events are currently running across the centre, which houses 20 inter-connecting halls. Ninety hard services staff (increasing to 106 full time staff next year) are joined by the cleaning staff team, which can vary from 50 to 2,000 people.

Steve Cartmell, integrated facilities services contract manager, cleaning and waste, began working on site 17 years ago 'with a broom in hand in hall 20'. Since then, Cartmell has worked his way up to his current position, where he is responsible for the delivery of cleaning and waste services on site, as well as working with the various events' organisers.

"I regularly walk the floor with our organisers and our customers to figure out the best process for them," he explains.

Team NEC, while having to address immediate work, such as clearing exhibition space as one event ends and another begins, sometimes overnight, as well as keeping food and retail plazas clean for more than two million visitors each year, has also been a driving force for new sustainability initiatives.

Brian Pell, group director of operations for NEC, is grateful to have the support of the board through their investment into sustainable practices.

"There is almost the temptation to say, 'let me paint all of the buildings and replace the frontage' I'm not saying they're superficial, but we've also been able to spend substantial amounts on all of the things that the customers don't see, but will absolutely benefit from."

The contracts with OCS and CBRE Norland began just over three years ago. The tenders, says Pell, were two years in the making. "We wanted to make sure that we were partnering with the right people, who had the right credentials. It's had a knock-on effect: even the smallest suppliers must now demonstrate their green credentials."

The amount of work carried out over the last five years, and the end results of that work, are quite staggering. £1.3 million of chillers have been replaced over a five-year period; Escalators and travelators have been fitted with motion sensors and investors, which reduce the energy consumption of the equipment; and more than 800 urinals have been fitted with technology that has saved more than 100 million litres of water each year. Cleaning materials used across the site are all chemical free.

Nearly £500,000 has been invested in the installation of 850 smart meters, which has enabled the team to be able to track consumption patterns and trends.

Sean Prior, energy manager on site, oversees the use of smart metering, and has incorporated energy targets into the contract with the building management system (BMS) provider).

"The biggest thing is to use the data," says Prior. "It's all very well metering everything, but there are 2 million bits of data per month."

The meters allow the team to make smarter decisions about energy usage. When a hall is not 'in show', Prior can now drop all of the lighting down. He can also identify if a single fridge is being powered in an empty hall.

"It creates good behaviours - a lot of it is remarkably obvious stuff, but it's installing that best practice."

Creating a green culture starts from the moment an employee begins working at NEC. On induction day, they are taken on a site tour and the environmental processes are emphasised as a key facet of the day to day operations. Getting suppliers and event organisers to embrace the green culture has also been relatively straightforward.

"Everyone wants to be part of a good news story," explains Pell. 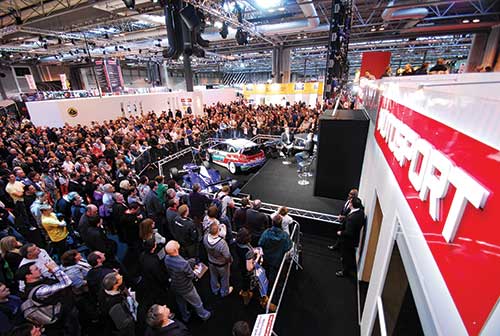 An exhibition centre of this scale produces large amounts of cardboard waste, as well as discarded brochures. To make the process more efficient a waste pre-treatment centre was opened on site in 2009 to give team NEC the ability to sort materials into its various streams, before it is baled and sent for further processing.

Cartmell thinks that the pre-treatment centre was the catalyst for the sustainability initiatives that followed.

"We came up with the idea [for an on site waste pre-treatment centre] on a post-it note over a bacon sandwich. I still have that post-it note."

Pell explains that many of the initiatives result from "blue-sky" thinking in meetings.

"We ask if we could [make an initiative work], and then we've got the expertise on all sides of the partnership. We come up with ideas, and then try to backwards-engineer them."

When the pre treatment centre opened, the site transformed from nearly 100 per cent of waste going to landfill, to zero to landfill, overnight.

"For the first few weeks, I was working in the centre," explains Cartmell. The material is separated, and each stream has a different onward journey. Spare wooden pallets are sold on or given away to local causes, while bins have been placed by loading bays purely for waste paint.

"We had a paint spillage, so from now on, we'll know where the paint is, so it can be treated correctly."

The baler has helped increase a single load of cardboard from one tonne to 22 compacted tonnes, which is then taken out to further processing plants. The waste trucks are based on site, in order to further reduce the organisation's carbon footprint by reducing the number of empty loads. The whole process has saved the NEC more than £700,000 in landfill tax so far. It has diverted more than 10,000 tonnes from landfill to date, and the number continues to rise.

Food waste is collected from kitchens, retail outlets and exhibitions and sent to a local anaerobic digestion plant, just three miles away, where the energy generated from the waste powers a sewage treatment works. The previous plant that the NEC used was in Staffordshire, but once word of a new plant in construction reached the NEC, no time was wasted in setting up a partnership.  The reduction in travel from 27 miles to three further cut the carbon footprint.

"There are other areas of the site that people don't realise have to be managed," explains Cartmell. "We've got a sixteen acre lake, 75 acre woodland. We've got badger sets, deer and other wildlife."

The grounds are maintained by Mitie, which uses reusable materials, such as broken branches, which are turned into wood chipping for pathways, throughout. The 14,500 car parking spaces are cleared of leaves, and low emission shuttle buses are used to transport visitors around the site.

"The storm drains all lead down to the lake, so we have to be careful if there is an oil spill or anything similar - the team is trained to respond so that hazardous materials don't reach the drains." 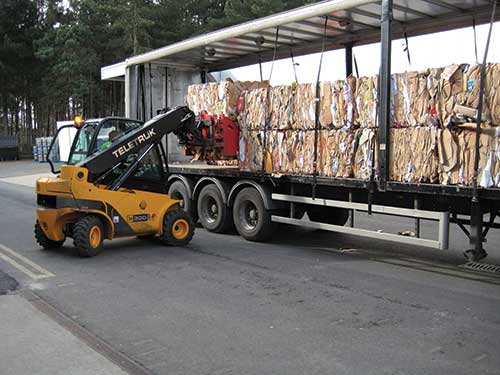 The nature of the inter-connecting halls gives the NEC the opportunity to test out initiatives. LED lights were installed in one hall and the resulting energy savings were monitored. If an initiative is successful, it can then be rolled out across the entire site.

As group director of operations, Pell can also roll out changes to the NEC Group, where appropriate. The group owns other venues such as the Genting Arena (originally the NEC Arena, opened in 1980 and based on the same site), as well as the Barclaycard Arena (formerly the National Indoor Arena) and the International Convention Centre (ICC), both located in the centre of Birmingham. The contracts with service providers are group contracts, which makes things easier to mirror across the portfolio.

"The ICC now utilises the food waste process, and it is collected by the same vehicles and taken to the same digestion plant," says Cartmell. "The Genting Arena also uses the service, and it's about to be rolled out to the Barclaycard Arena."

"It doesn't always fit," says Pell, "either by footprint, or if it's in the city centre, it's very difficult. But we've got lots and lots of space here, we can do wonderful things."

Pell, Cartmell and the team are keen to point out one their overriding behavourial characteristics - that they seldom rest on their laurels. Once one initiative has been implemented, rolled out and seen to be successful in saving money and carbon, they loook elsewhere for the next project.

"We're nearly complete on the feasibility study on recycling the site's waste water," says Prior.

"The big one is biomass," says Pell. "If we can make that work, we'll become carbon neutral almost overnight."

The team has also thought about wind farms, but the NEC is close to an airport (Birmingham International Airport).

"We've considered anaerobic digestion on site, too. We've also looked at photovoltaic panels on the roof, as we have got 186,000 square metres of roof space that could house either PV cells or thin film PV.

"A biomass (2,000 megawatt) station would make us a substantial generating site with all renewable energy."

Visitors may continue to see only the slightest evidence of the waste management work going on around them, but for the team at the NEC the BIFM sustainability award is just the latest milestone in an ongoing project. 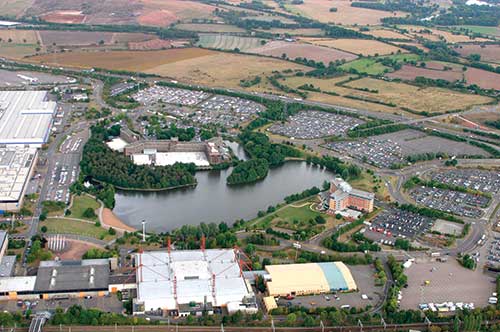