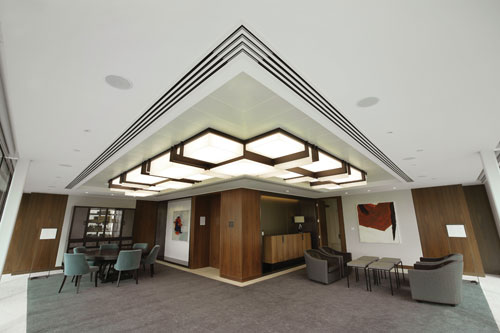 Although LED is not a new technology, its application in the development of lighting for commercial and residential applications is close to revolutionary in that it will herald the complete change of design for office applications from the current practice of using fluorescent fittings.

LEDs are devices that emit light when subjected to an electric current. Green and red versions have been around since the 1950s, but creating the blue emitters was a technical challenge that stumped the industry for decades.

In 2014 the Nobel Prize for Physics was awarded to Shuji Nakamura, Isamu Akasaki and Hiroshi Amano for their invention of diodes that emit blue light, something which has subsequently enabled bright and energy-saving white light sources to be achieved and developed commercially.

The Nobel committee declared that "incandescent light bulbs lit the 20th century, the 21st century will be lit by LED lamps".

This success has opened the door to white LEDs, which can have efficiencies of 20 times those of conventional lamps.

Professor Dr Wolfgang Schnick, chair of inorganic chemistry at the Ludwick Maximilian University of Munich, believes the development "cannot be estimated too highly" and that it will "help save up to 20 per cent of the global electricity consumption".

So can LED solid-state technology save the world? There are doubters out there, and some myths and misconceptions of lighting in the workplace. But on the face of it, and according to many academics, a huge global reduction in power consumption could be achieved.

This in turn would result in the burning of significantly less fossil fuel and a corresponding reduction in the release of carbon into the atmosphere.

Reducing the carbon footprint is at the heart of developing sustainable design, and is now a mainstream requirement in construction practice. As energy costs rise, the price premium for green building products will fall in comparison. 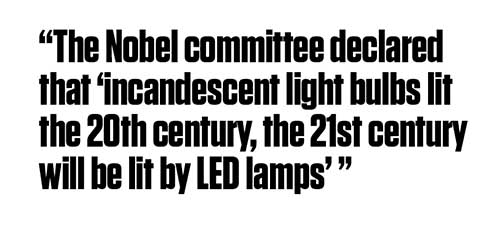 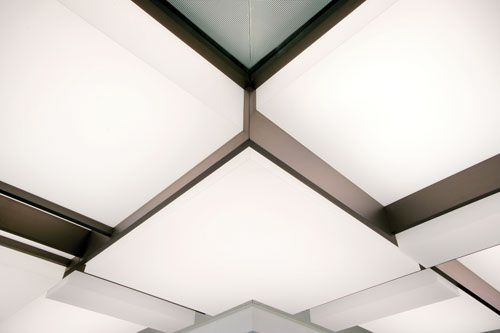 LED lighting design and products are at the forefront of energy-efficient design, reducing carbon emissions and contributing to high performance green building standards. But there are many challenges, and here are some of the technical observations put forward by consultants and other client advisers - putting forward their views or misconceptions.

Question: "Lumens per watt for LED is very close to the fluorescent's efficacy."

Answer: Simply not true. Typically, fluorescents are below 100 lumens per watt at source. Taking account of the way they work with an optic in the luminaire, this value will reduce even further because the light distribution is through 360 degrees, light being lost

bouncing around within the luminaire. LED offers in excess of 150 lumens per watt, and as the light is emitted in a single direction, all its light is used for direct distribution.

A: An LED lamp should have a life of 50,000 hours and possibly more, compared with fluorescents at 10,000 hours. Lumen value decreases over time as an incandescent lamp is operated; it's called lumen depreciation and is around 70 per cent of the rated life of the lamp. So for a lamp rated at a 1,000 hours the light output would start to drop off at 700 hours.

Q: "Should a fault occur in an LED fitting the whole unit needs to be replaced."

A: This may be true for cheap imports, however, most leading UK manufacturers use Zhaga-compliant LED engines that allow for the replacement of the LED should a failure occur. Moreover, LEDs are inherently more reliable than fluorescents, providing significant savings on maintenance costs.

Q: "The quality of LED products produced is often impaired because of the manufacturers cost restrictions."

A: Reputable manufacturers use leading LED suppliers for the engines and have seen the costs of products fall as component costs reduce and the market grows.

A: At present, LED lighting costs are higher by some 20 per cent to 30 per cent on a product comparable basis. That said, clever layout and design shows that for each square metre of space the number of LED fittings required is one per 9 sq m compared with fluorescents at one per 6 sq m. Cost in use models clearly demonstrate that energy savings over initial higher LED capital costs works in favour of LED as the favourable commercial option. Return on capital invested can be seen as soon as within two or three years. LED component manufacturers are looking at the development of growing gallium nitride (GaN) LEDs on silicon substrates. It has been speculated that epitaxy manufacturing processes could reduce production costs by up to 90 per cent.

Q: "The quality of LED and its colour are generally sacrificed."

A: In the Future Designs modular range of office lighting products the quality of light from an LED source is the same as offered from fluorescent ones. The CRI > 80 is standard and can be increased to CRI > 90 for museum and gallery applications.

Q: "The human eye is best suited to natural daylight rather than harsh indoor office light."

A: Interesting, but somewhat irrelevant in today's commercial office world and work environment. That said, most offices are specified as 4,000-kelvin cool white, however, LED can be supplied at 5,000-kelvin daylight colour if required. LED does not cause flicker, and offers edgeless homogeneous lighting, whereas fluorescents are susceptible to striation with bright and dimmer areas moving down the tube.

Q: "Unified glare rating {UGR} is often more than people can cope with."

A: CIBSE has set maximum glare values and responsible lighting designers and quality manufacturers develop LED products to control within the specified limits.

Clearly, any lighting solution for a building needs to be fit for purpose and design engineers and manufacturers have an obligation to look at options and impacts. We experience our environment through our eyes; appropriate lighting design needs to take care of the nature of the business, the working methods, open-plan and cellular configurations, and the way staff work together.

Good lighting design and appropriate product selection is essential to achieve an attractive and productive working environment that supports the functional needs of the building in terms of energy and maintenance costs while reducing impact on the environment. 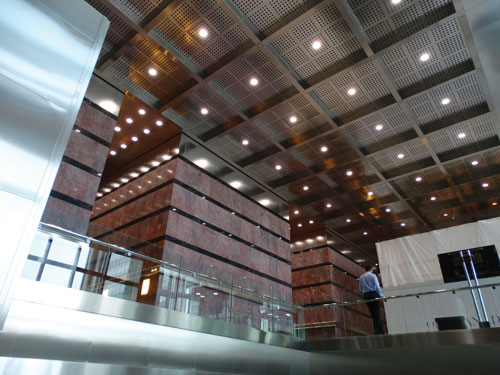 Major corporates are turning to LED in new installations and refitting existing systems with LEDs to get the benefit of better-quality lighting that is sustainable.

It's difficult to see how fluorescent lighting can survive. The technology in lighting is changing, the LED today is to the fluorescent what the tungsten filament lamp was to the candle - it will snuff it out.

But there may be a much bigger issue that LED can contribute to - and that's climate change. If the experts are to be believed, we are approaching a temperature rise tipping point that is going to have catastrophic impacts on world climates.

The industrial nations are attempting to reach agreement on "legal controls" on the production of carbon dioxide going into the atmosphere, but are unlikely to succeed, so could LED lighting help save the world - a nice thought.

Driven by burning coal, oil and gas for energy, carbon dioxide levels are now 143 per cent higher than before the Industrial Revolution, with a global average of 397.7 parts per million  (ppm). The annual average is likely to pass 400 PPM in 2016.

Average global temperatures are likely to reach 1°C above pre-industrial levels for the first time, half way to the critical 2°C.

Scientists warn that at that level there would be an unprecedented rise in sea levels, causing damage to food production and wild life.

According to Michel Jarraud, outgoing secretary-general of the World Meteorological Organisation: "Time is running out. We have to act now to slash greenhouse gas emissions to have any chance of keeping the increase in temperature to manageable levels."