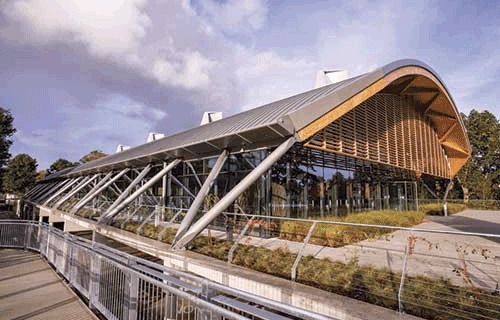 Understanding how client organisations work and what they need is key to creating successful workplaces. Richard Byatt considers the art and science of user briefing with a look at the WWF's award-winning Living Planet Centre. 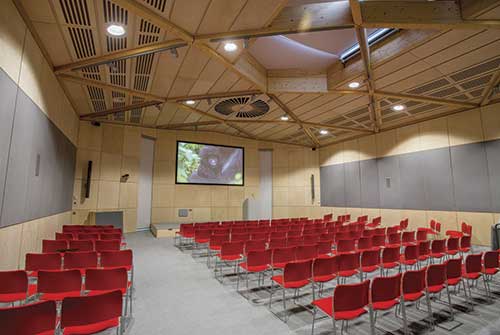 Ask any architect or designer about their most successful projects and they are likely to say: "The ones where the client was engaged and knew what they wanted." But many clients need help to understand what they want or, more importantly, what they need

By any measure, the Living Planet Centre - the Woking headquarters of international conservation charity WWF - is a successful building. It has won several awards since it opened in 2013. Most recently, it was given the 2015 British Council for Offices National Innovation Award.

The environmental credentials of the project are impressive. The Living Planet Centre achieved a 42 per cent reduction in embodied carbon emissions at the concept design stage.

The building will have whole-life carbon dioxide emissions less than one-third of the average modern office building.

WWF CEO David Nussbaum said: "Our passion for nature has to be matched by a commitment to use the planet's resources sustainably, and we can now practise what we preach from a building that shows what can be achieved when we are determined."

Why has the Living Planet Centre been such a successful building and workplace? Part of the reason must surely be the extensive user briefing process, begun even before a site had been selected. Hopkins Architects worked closely with workplace consultancy AMA Alexi Marmot Associates to understand how WWF used its existing premises in Godalming, Surrey, and what they desired to fulfil their vision and aspirations for a new building.

"Most relocation projects are essentially exercises in change management. It's vital to get accurate, up-to-date information on how an organisation ticks, how it is using its existing facilities and draw out their vision of how they want to work in the future. Too often this stage is rushed or short-circuited, but to obtain great results from a major move it needs sufficient time, budget and leadership commitment."

Crucially, the consultancy spent time getting to understand WWF, its team undertaking a full workplace audit to review working practices, occupational densities, and aspirations for the new building.

The client's initial idea was that the building would be more than simply a functional office space.  The request for proposal stated: "It will enable us to fulfil our mission and bring our work to life and will also enable us to engage others and inspire significant change."

How do you translate these lofty aims into the blueprint for a new building that responds to the current shape of the organisation as well as its ambitions, yet without locking in working practices and technology that could be outmoded by the time the project is realised?

The answer is the combination of quantitative and qualitative research; immersive staff engagement; the development of alternative scenarios to prompt thinking about the workplace of the future; the close involvement of designers in the briefing process; and communication - lots of it.

Having the right people in place is vital, particularly for the client team. Karen Gravestock was WWF-UK's head of HR. She stepped away from her day-to-day job to become the internal project manager and has been involved from the early briefing phase, through looking at different ways of working and choosing furniture, to the physical move.

Following the move, WWF reviewed its operations structure bringing together HR with facilities and building-related marketing and events. In the end, they went a step further and included responsibility for the ICT service desk in the role.

"It's about enabling our people and our place to be the very best they can be," says Karen. Her role as director of people and place demonstrates WWF's holistic view of the workplace, one that more organisations could well adopt.

AMA's 'WorkWare' toolkit was deployed to gather evidence on which to base concepts for the new workplace. The staff survey showed a very low level of satisfaction with the existing office environment. At 27 per cent, it was well below AMA's 56 per cent benchmark for public and private sector organisations.

Karen worked with WWF's head of facilities to find out what staff liked and didn't like about the existing offices and what they had experienced elsewhere. In addition to the project team (which included head of facilities, director of IT, director of brand design etc), they created an Inspiring Workspace Group made up of staff volunteers.

With Pam Bate, the Hopkins partner responsible for the interiors of the Living Planet Centre, this group visited a number of other innovative workplaces, including The Guardian, the Met Office, the National Trust, Amnesty International, the BBC and the Co-Op to understand how people were working differently.. 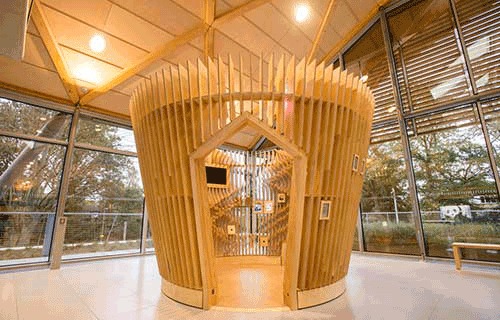 The consultancy worked to understand how WWF was using space and how this might change.
Questionnaires, observation, interviews, and workshops were conducted. WWF has a significant number of scientists on its staff. They are used to looking for evidence to support decisions, so they understood the importance of this process and bought into it. Importantly, Hopkins attended all the workshops and interviews so that what was learnt could be communicated directly to the design team.

Armed with this information, three different scenarios for the future WWF workplace were modelled around the likely allocation of space. These alternatives were labelled Business as Usual (BAU - essentially the status quo with minor improvements); Mild Green and Deep Green, each with a different quantum and allocation of space, cost, and CO2 emissions per employee.

"Offering a number of scenarios helped WWF to focus on what was important to them," says Alexi Marmot, "and in some ways helped them to be bolder in their decision-making."

In the end, WWF opted for the Deep Green scenario. It came with higher sustainability credentials but also offered better communications between staff and more space for the visitor centre and educational suite.

"When WWF selected Hopkins as preferred architects, the organisation did not have a site for a new HQ," says Pam Bate, "Hopkins and AMA therefore had time to do a thorough space audit to determine the size and type of building that would meet their needs."

"Although the 3,600 sq m Living Planet Centre is one third larger than the previous headquarters, almost half is used to welcome in the WWF community: visitor space, the auditorium, boardroom, education space and large meeting rooms, so workspace is not dissimilar to WWF's former home," says Alexi Marmot. "The visitor centre and education facilities are integral to WWF's outreach mission as well as a condition of a major tranche of funding for the Living Planet Centre."

The Living Planet Centre supports 340 staff with 200 desks in team zones, plus 150 other spaces in which people can work.

"We now encourage people to come in and just think about what they want to achieve in a day," says Karen Gravestock. "Do you need to be sat with a monitor; are you going to be collaborating or do you need to keep your head down?"

The move to a new location can act as a catalyst for change, but it's not always a good idea to do everything at the same time, such as introducing new ways of working and a major ICT upgrade. WWF introduced laptops ahead of the move to signal that people would no longer be tied to a particular desk. Around a year before the move, a mock-up of the new working environment was built, including bench desking, a quiet booth, and breakout area. Teams - including the chief executive's people - worked in the space and provided feedback.

The key to a successful workplace transition seems to be communication, communication, and more communication. This is particularly true for the WWF as initial conversations started in 2006 and the move was in 2013, so it was important to sustain momentum. Early engagement between consultancy and client staff through steering group and staff meetings, communications, interviews and collaborative workshops, was continued. With support from internal communications, Karen and the team talked to people frequently during the process.

Once the Woking site was selected, communication ramped up further. WWF tried to dispel fears around travel to work and hot desking. Engagement included talks, workshops, emails, and a "flythrough" of the new space. WWF offered a travel support package, season ticket loans, a lift share scheme, and provision for cyclists, including secure bike storage, showers, and a drying room.

As work progressed on site, WWF brought its people to Woking and used the nearby Lightbox gallery for presentations and a big 'reveal'. Staff heard from the architects and from the contractor's sustainability manager.

That there were minimal changes from the early designs during the project phase and very few people have left WWF because of either the new location or the changed work environment, which demonstrates the positive effect of all the planning, briefing and communication.

London (Greater)
Up to £47,276 per annum plus excellent benefits
Reference
59097
END_OF_DOCUMENT_TOKEN_TO_BE_REPLACED