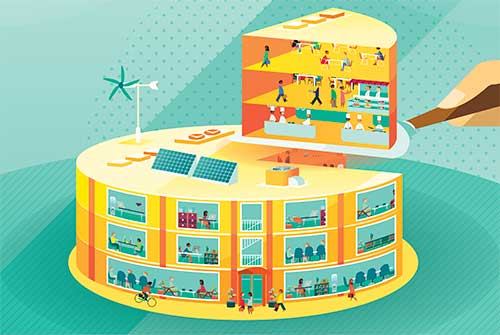 Contract caterers are taking lessons from the high street and elsewhere as they seek new ways of maximising the smaller amount of food prep and dining space from which they're being asked to operate. Nick Martindale reports on a rapidly changing sector.

In years gone by, armies of workers would sweep into staff canteens during their lunch hours to be served heavily subsidised meals produced in large kitchens by significant teams of staff.

Those days are long gone in most workplaces, but recent years have seen an even greater reduction in the space made available to caterers by employers.

"The problem is that the cost of space has gone up significantly, not just in terms of rent but also rates and utility bills," says Jonathan Doughty, regional director at Coverpoint Consultancy, part of JLL.

Simon Biggs is chair of BIFM's catering and hospitality Special Interest Group, and a senior partner at Litmus Partnership. He identifies a number of other drivers behind the shrinking space made available for catering, including the general move towards smaller offices as a result of people working remotely or flexibly, and also a relaxation of policies preventing people from eating at their desks.

"You no longer have a situation where the whole workforce comes down between 12 and 1pm; you'll get people coming down throughout the day, and some people may not even have lunch at all," he says. "So there is less reliance on having a big restaurant that is going to accommodate all the workforce at a certain point in time."

Where larger operations remain, they are increasingly expected to serve other purposes, such as coffee bars, breakout areas and even facilities for external events, he adds.

Café society
This all means that many organisations are choosing to have smaller units serving sandwiches, salads and coffees, more in line with high street offerings.

"They're opting for contemporary cafes and high-end, deli-style, on-site outlets, and this doesn't require as much physical space as the traditional alternative," says John Hamill, managing director of catering at Servest. "The reality is that businesses don't want to be paying subsidies any more. If you're offering a more compact deli-style alternative, then the labour bill is a lot lower, as is the cost of the space itself."

Alongside this, the contracting model has also changed over the years, from full employer subsidies through to Cost Plus arrangements, and more recently either a performance-related approach or a more commercial arrangement under which catering contractors pay for the right to operate, and need to make their money from food sales.

In turn, this has led providers - as well as employers - to be much leaner with their own space requirements and resources than they may have been when they were receiving large subsidies.

"They are less reliant on a heavy workforce, and they're streamlining their working practices and food offers," says Biggs. "In the past that would have been a client issue, but clients are now asking them to pick up additional costs of running the business, so ultimately it needs to run commercially. All this is about space reduction; you don't get now what you got in the past."

A further factor in driving down space is technology, with modern equipment often able to fulfil a number of roles.

"In the past you would have a standard set of equipment which could be an oven range and steamers, and over the years that has got smaller and more efficient and dual-purpose," says Carl Morris, director of marketing at Elior. "So the modern combi-ovens do heat and steam, so that does away with the need for a steamer because you can do it all in one place."

The trend towards buying in pre-prepared vegetables has also had an impact, reducing the need for extra staff - and storage - on site. 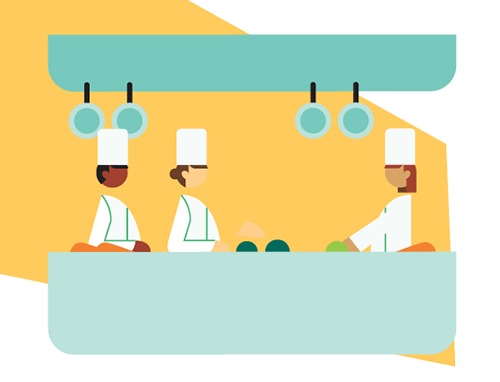 Not surprisingly, caterers have had to come up with new ways of working as a response to the demand from clients to work in less space. One is to adapt to the demands of a faster-paced environment, where customers expect high-quality food without having to wait for it, much in the way they would on the high street.

"Nowadays, people want a gourmet coffee and a spiced duck wrap with fresh garden salad, so their requirements are what you would expect from the high street but they still want it in a contract catering environment," says Doughty. "The skill is how to be a food retailer, and much less about managing a food outlet with 30 staff and cooking stations. People don't have a lunch hour any more; they pop out for 15 minutes so it's really important this is done quickly, and contract caterers have to learn all these skills. It's not surprising that the staff they now employ have come from Pret, Greggs, and all these other mainstream high street outlets."

In some cases, caterers can find that clients have allocated the vast majority of what space there is to front-of-house facilities, and there is little or no kitchen or food preparation area.

"Quite often, a caterer is not involved at the early stages and, by the time they engage with the client, the space has already been determined," says Anthony Bennett, co-founder of Bennett Hay. "That becomes the point when the caterer has to work with the limitations of the space, ensuring the client's menu range requirements can be met regardless. In this situation, the caterer, using a nearby kitchen to support the operation, could deliver a fresh food offer, which is then served by one or two staff in a café."

Other potential solutions include setting up a pop-up station with a particular food or drink offer that could be run by suppliers or a guest chef. "This is a great way of enhancing and expanding the offer to customers without taking up too much space," he adds. "Increasingly, we are also using equipment that requires no extraction or ventilation to deliver a fresh food offer within very small spaces." 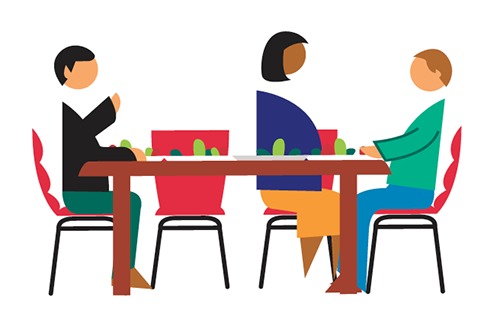 Other changes are happening in the kitchen itself, trying to free up both space and time by dispensing with washing up. "Some sites have moved entirely to disposables so there is no wash-up facility for plates, knives and forks," says Morris.

The range of food is also affected as less space and fewer staff mean it becomes more dangerous to have people crossing each other in the kitchen with pots and pans, and also enhances the risk of cross-contamination, he adds.

"Someone might be doing sandwiches and they have to quickly change over to salad, and it becomes quite frenetic. So they will look at more grab-and-go items rather than hot main items, because you can serve a higher volume of those types of product."

Some of the more desirable elements of presenting food to customers might also have to be compromised, says Chris Osborne, operations director for catering at G4S FM.

"There is a trade-off," he says. "Deli bars and salad bars take up space in the dining area and are labour-intensive. Exchanging these for multidecks and using vertical rather than horizontal space allows for better space planning, quicker peak-time services and lower labour. The skill of the caterer is to create a range of grab-and-go products that still excites the customer." 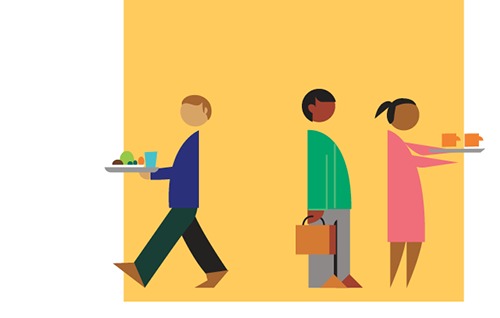 In the longer-term, the pressure on space is also likely to accelerate the trend for catering provisions to be more centralised, with one outlet provided by a landlord serving a number of employers in a particular building or park. "The type of real estate that is being offered to occupiers is changing," says Doughty. "Offices are tending to be clustered more now so they sit in office parks and so we're seeing a consolidation happen."

He gives the example of White Rose Office Park in Leeds.

"There were six different staff restaurants in six different buildings and the developer decided it would be more sensible commercially if all six closed, and the landlords developed a brand new building in the middle of the park which everyone could use," he says. "It has worked really well."

Such a setup may only be an option when a building is redeveloped or new office park built, although there would be nothing to stop a number of enlightened employers coming together to create a centralised catering area in this way.

Yet employers and providers alike are inevitably going to need to come up with some creative solutions to the issue of catering, and particularly what it is possible or desirable to produce in the space available, and this might call for even more radical thinking.

"We don't believe that it is any longer sustainable that the corporate occupiers have to give up all this space, and we've suggested in the past that clients look to operators with off-site central production facilities," says Mike Coldicott, director of Tricon Foodservice Consultants. This idea is already starting to happen in London, he says, as a result of planning regulations that increasingly require businesses to restrict the number of deliveries they receive each day, but it could also be the solution to the space conundrum.

Some operators will see this as negative because their marketing philosophy is based around having fresh food prepared on-site daily, and now it will be 25 miles away," he says. "But our opinion is that whichever of the caterers - and it will be one of the big ones - jumps first and sets up a central production kitchen will steal a march on the others for a number of years. It would give the operator a commercial advantage, but the cost to the client of cooking it offsite and bringing it in compared to the corporate real estate space saving is quite dramatic. The business case is very strong."