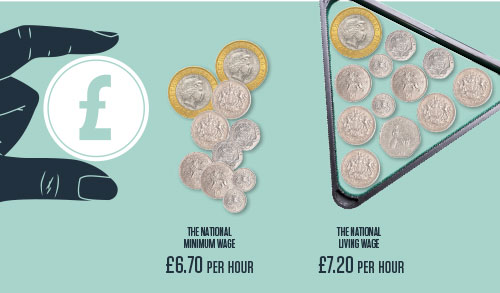 The National Living Wage is legislation with great significance for facilities service providers. Here, representatives of FM firms explain how they think the market will be affected and how organisations will need to work in different ways to make the sums add up.

This month, an estimated 1.8 million workers will get an immediate pay rise as a result of the new National Living Wage. It follows chancellor George Osborne's surprise introduction of the measure last year, and follows a concerted campaign by the Living Wage Foundation to which many firms providing FM services had already subscribed.

Legislating the NLW will cut both ways. 2.75 million people will have been affected by the time the top rate becomes effective in 2020, although an estimated £1 billion will be spent in extra costs during the NLW's first year, say government advisers.

But the crucial question is - does the NLW change the nature of conversation with clients?

"The NLW does impact cost and focuses both the client and especially the provider on ensuring that value for money is delivered," says Martin Reed, group managing director of Incentive FM Group.

"The days of 'fat' in contracts have gone and our belief in open book commercial agreements supports this. Staff will be asked to work efficiently and be paid a living wage for their efforts. The only ones who will suffer are businesses that pick the providers who don't work with their staff to extract true value for money."

Richard Sykes, CEO ISS UK & Ireland, says: "What we should do at this point is highlight that what's referred to as the 'national living wage' is technically a new premium on top of the National Minimum Wage; in effect, it's an enhanced Minimum Wage."

"A number of our clients provide the Living Wage, as developed by the Living Wage Foundation, and have valuable insights and experience to share about successful implementation of new pay levels. Those preparing for the government's change to the minimum wage can learn from these Living Wage pathfinders."

Cordant's Packenham believes the higher rate of the NLW could lead to firms currently outsourcing on the grounds of cost reavaluate the benefits of having FM back in-house.

"The higher the minimum wage the more level the playing field becomes with regard to pricing contracts," says Packenham, "and the sector may also see greater consolidation, particularly within the lower margin FM sectors.

Client response to the challenge of the NLW is crucial "Our clients are understanding of the pressures this legislation brings to them and have generally entered into a fair dialogue to overcome any issues together," says Reed. "Where clients see it as a 'contractor issue' we have provided options and choices to help them work with us to implement the new rates."

"Will paying NLW improve the calibre of the talent pool? Not significantly in my view," says Packenham, "although the UK may well become a more attractive proposition for higher-calibre people from within the EU, assuming the UK does not vote to leave. In the higher margin FM services sectors, the NLW is unlikely to have a significant impact as pay rates will typically already be above £9 an hour.

For ISS, the policy is to introduce the voluntary Living Wage option alongside the NLW. "We find it's a positive way to inform, educate and introduce clients to the opportunities and new ways of working" says Sykes.

"For example, our new learning and development programmes at ISS are designed to support and develop our people to find the best way to perform their role. The end result is people who are geared to supporting positive outcomes for themselves in their work and ultimately for our clients.

"The market will evolve and thrive," adds Sykes. "It always does. We innovate, we create and we implement new and better ways of working.

"We are perhaps looking into a future where we have a two-tier playing field comprising those clients paying the NLW and those offering the higher Living Wage. Those providing the latter will be in a position to attract the best people and in turn possess a more stable, engaged and loyal workforce with lower churn and associated costs."

For Incentive, Reed sees an opportunity to make all elements of FM services not just an entry-level position but a real career choice.

"We will continue to work with our staff to provide professional levels of training and ensure that they never say 'I'm just a cleaner' or 'I only work in the kitchen'. They do a great job, they are going to be rewarded for it and should be proud to be in the profession."

Packenham expects retention and performance of staff to increase in the short term. But, he says, "there is a general sense that these boosts will lessen as the new wages become the norm".

The NLW, as with the LLW, will narrow the gap between supervisors and operatives "unless clients are willing to pay to maintain the differentials", says Packenham. "If they are not, this can create a problem for the FM provider to recruit and encourage staff to take up these positions."

"It is likely that FM service providers will be forced to innovate and seek ways to deliver services more cost effectively. This will likely result in FM businesses having smaller teams but possessing a broader range of skills."

The structure and size of FM teams always depends on a range of factors," says Sykes. "The government's NLW premium may have some impact, but it's unlikely to be in isolation. Other points to consider are whether a provider self-delivers services, the mobility of the work force and the individual needs of each client. For example, better communication allows us to direct our teams of mobile engineers to the jobs best suited to their experience, capacity and resources; in the future, why shouldn't the same be feasible for our frontline people on contracts where this suits the clients' style of business?" 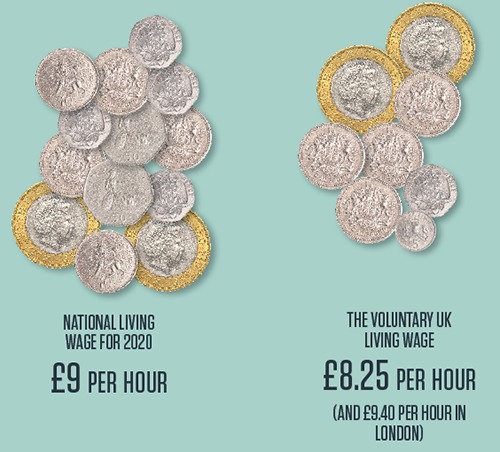 A market in flux

The National Living Wage may be seen a laudable and progressive move by the government, but the rise in costs is proving quite a challenge to FM operators, as business correspondent Graeme Davies reports

Already, in the run-up to the first NLW hike to £7.20 an hour this month, some company bosses have bemoaned the extra cost to their businesses of the across-the-board hike, never mind the fact that it will continue to rise at well above inflation for the rest of the decade. Indeed, last year Interserve warned that the introduction of the NLW could cost it up to £15 million in the first year alone.

Many companies have been quietly preparing themselves for the extra hit to their wage bills while others have already voluntarily adopted the recommendations of the Living Wage Foundation. Some FM operators, such as ISS, have been paying Living Wage Foundation-recommended minimum wages for many years while some buyers of FM services have long insisted that their contractors should pay a minimum wage to employees working on their premises.

Nonetheless, for some suppliers and their customers there are likely to be shocks to come. Margins are already wafer-thin and the potential to recoup some of the losses by passing on costs to customers through higher prices may be off the agenda.

Indeed, many buyers of services have already begun to signpost their expectations in terms of the pay rates for employees of suppliers and some have already gone above and beyond the rate being introduced. For example, Manchester City Council has adopted the 'Manchester Minimum Wage', taking on the Living Wage Foundation's suggested £8.25 level for paying its employees and also indicated to suppliers that this is a level it expects suppliers to pay their employees. Manchester has said it will evaluate each contract on its individual merits but will use the payment of a decent minimum wage when evaluating the 'social value' of tenders submitted to it for contracts.

The big threat for employers who are potentially locked into long-term contracts on relatively thin wages is that the rising minimum wage, which is likely to average something like 6 per cent a year growth over the next four years, could wipe out margins on contracts that often see any uplift in payments linked to currently non-existent inflation. Firms are already casting around to find ways of mitigating rising wage costs with some suggestions that the best way of doing so would be to thin out their workforces while attempting to improve productivity through better training and better use of technology. There is also the potential for some companies to make more use of contracted or freelance employees, which reduces costs as there is less requirement to provide holiday pay, pensions and healthcare, potentially to the detriment of the employees themselves.

But many companies have already been through a prolonged period of sweating their assets more efficiently as they have sought to trade through the recession and beyond while battling tough competition. Low inflation over the past few years, coupled with a tough competitive environment, has made it hard for suppliers to pass on additional costs to clients and this is likely to continue in the coming years.

Those who have not yet adopted a minimum wage policy could do well to study those who have successfully paid a minimum wage over a period of several years, and also those clients, such as SSE, who have insisted on 'responsible procurement' standards such as minimum wage clauses in contracts and how they have worked with suppliers in an effort to mitigate the impact, as there is little to be gained from forcing a supplier into financial difficulty as the most obvious result would be poorer service standards.

One company that has lobbied suppliers on the minimum wage is KPMG, which worked with its contract cleaners to establish more efficient ways of working and also more realistic ways of contracting in cleaning services. KPMG asked its cleaning contractor to agree a minimum standard of acceptance for the work being done but removed clauses relating specifically to how many hours of work would be supplied, giving the supplier the flexibility to work in different ways to produce a mutually acceptable outcome and would be 'cost neutral' to the supplier. Such has been the success of KPMG's approach that it has not only kept a lid on rising costs but reduced the overall cost of its bought-in FM services to below the levels seen in 2006 - when it first began to encourage suppliers to pay the Living Wage.

This 'grown-up' approach is something that is likely to have to be adopted across the industry in years to come as companies struggle with rapidly rising wages eating into thin margins. Such a cultural change will not happen overnight, and in the short term costs across the FM industry are likely to rise. But the success some companies have made of adopting a Living Wage indicates that it can be done sensibly without destroying businesses or relationships between suppliers and customers. 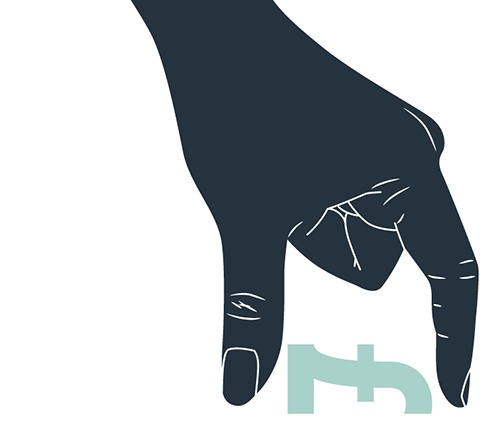 The wider issue of the Living Wage and its impact on performance was the focus of a recent FM World webinar sponsored by workforce management software developer Kronos.

Participants discussed the impact of the elevated wage floor on the attitude of workers; the way in which team hierarchies and supervisor levels are maintained; and the uplift in workers' 'discretionary input' resulting from increased commitment levels.

Stuart Wright, property and facilities director at Aviva, was joined by Caroline Reilly, programme manager of the Living Wage Foundation and Charlie Mowat, managing director of the Clean Space Partnership.

To listen on demand, visit: www.fm-world.co.uk/nlwebinar