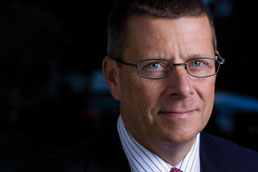 For Monteray, preparing for a second generation deal with BT worth half-a-billion pounds is about more than just service delivery - the client wants change. Cathy Hayward speaks to the joint venture's newly appointed MD Peter George-Jones about why the new approach is needed and the challenges it presents

If Peter George-Jones is feeling any apprehension at the thought of the Herculean task before him then he's not showing it. The CV of Monteray's new MD describes him as "a highly experienced and assured director, with a high degree of flexibility, sound judgement and always a very positive outlook in a challenging and rapidly changing environment." And he will need all of these attributes over the next few months, managing the transition from the existing contract with BT to the new five-year, £500 million agreement which starts next April.


The main issue is, George-Jones tells FM World, that when BT signed the second generation contract in February this year "it was important to them that it was a new contract and not an extension of the old". Part of this is because there was a perception within BT about what Monteray delivered before and they wanted that changed. The challenge for George-Jones and his team over the next six months is stark: "How do you deliver a recognisably-different service and contract with front-facing staff who are predominantly the same as with Monteray?"

Part of the answer is to completely restructure the organisation. Monteray, which was formed in April 2000 as a joint venture between Carillion, Haden and Reliance to revolutionise the provision of FM to BT, was managed by an overarching Monteray Enabling Organisation. On an operational level there were eight franchised geographic areas throughout the UK, managed by regional service providers providing services ranging from cleaning and security to building and grounds maintenance. Three were led by Carillion, two each by Haden and Reliance, and one by Mitie in Scotland.

But the value BT perceived it would get from having different suppliers providing different elements of its FM had run its course, explains George-Jones. "The downside was that it was difficult to guarantee consistency across the regions and people became focused at a local level rather than being aware of, and buying into, what happened at a national level." From the BT perspective, there was no one point of contact and it was also inherently inefficient and ineffective to have four separate organisations each with its own back-office functions.


This year Monteray collapsed the regional structures and became one organisation. The Tupe transfer of the 2,400 staff from the individual service providers to Monteray happened on 1 August and was, says George-Jones "straightforward and without emotion" mainly because the Monteray brand is strong and people felt an allegiance to it.

What was more difficult, and personally invasive, was the reorganisation of the new Monteray which involved creating a new structure for the business and then matching the roles of current employees to new role profiles (which may not have historically existed or have changed location) in that structure. Of the 2,400 Monteray staff, around 2,100 roles will stay substantially the same in terms of geography and responsibility - these are largely front-line staff such as cleaners, engineers, grounds maintenance and concierges.

Of those remaining, the substantial majority will have a very good fit to roles in the new Monteray and will formally apply - initially these roles won't be open to external applicants. Employees who don't wish to work for the new organisation will be offered roles in one of the shareholder companies (the former regional service providers). If a role is not obtained, then they will be made redundant. But George-Jones is adamant that it will be regrettable if people had to leave. "But whatever you do and however hard you try there is always bound to be a period of unsettlement," he says.

Up to 50 people have already left the company, although it is difficult to directly attribute that to the reorganisation - certainly under the old system facilities professionals moved in and out of Monteray and the regional service providers as job opportunities were varied. The reorganisation and Tupe transfer only served to highlight career prospects and encourage people to look at their future says George-Jones. At the end of the three-month consultation process, which started in mid-August, George-Jones hopes that the new structure will be populated with as many people as possible, but he recognises that there will likely be a gap between the skills of some staff and the requirements of the new Monteray and eventually the organisation will recruit externally.


Although he talks continually about the Monteray brand, the new organisation will have a new name and corporate identity - something George-Jones is keeping under wraps for the time being. This is another example of the organisation distancing itself from what went before and proving to BT that the arrangement marks a break from the past.

In January three pathfinder sites will be chosen as full pilots of the service to be launched in April the following year, with a new IT system and Cafm platform. Again George-Jones won't be drawn on where these sites are, but he does reveal they will all be in one region. They will run for two months and performance will be reviewed in March allowing any necessary changes to be put in place before launch in April.

Although he constantly refers to the April deadline and there will be a hard launch of the new contract and service on that day, George-Jones recognises that there won't be a big bang on 1 April which transforms the service. "The period between November and April is very much about changing hearts and minds at the front end and engineering cultural change so the customer recognises that there is a difference. Frankly this is not going to be something that can be switched on come 1 April, cultural change takes a lot longer to achieve and will continue its development after 1 April." Much of the responsibility for this he places at his own door and that of his senior management team.

"Personal articulation and personification of how the values should look is essential." The difficulty, he explains, is that he wants people to feel more empowered than they did in the past, and free from constraints to use their judgement to make decisions under the specific circumstances they face. "We want them to have that degree of flexibility, not a free for all, but in a controlled fashion."

Asked for examples of good practice under the new contract he says that the organisation needs to develop live examples then they can be used to communicate to the rest of the organisation what is expected. "The trick is to make sure your managers recognise examples of change when it happens and to make a fuss about it. I'd be disappointed if within six months there weren't some concrete examples of what we're looking for."

It's been something of a roller coaster first six months in the role for George-Jones and he acknowledges that some things have taken him by surprise. "There was a different degree of empathy and emotional commitment to Monteray that people felt that I wasn't expecting." He was also taken aback by the commitment to the customer. Because of the nature of the Monteray/BT relationship, facilities staff act as one team, whatever discipline they're from.

"There is more co-operation and efficient service for the customer which is less apparent in sub-contracted business models," says a man who spent five years as a director at LS Trillium and four years with Johnson Controls.

Asked whether the example of a third generation contract between BT and Monteray is indicative of a wider trend within the FM sector for longer-term, partnering relationships, he agrees. "The trick for the provider is whether we reinvent ourselves to capture the customer and mirror their agenda to adapt our own organisation."

February 2008: Announcement that new deal between Monteray and BT will start in 2009

December 2008: Five pathfinder sites will be mobilised as full pilots

April 2009: Start of new six-year £500 million contract with the potential to extend for a further four years